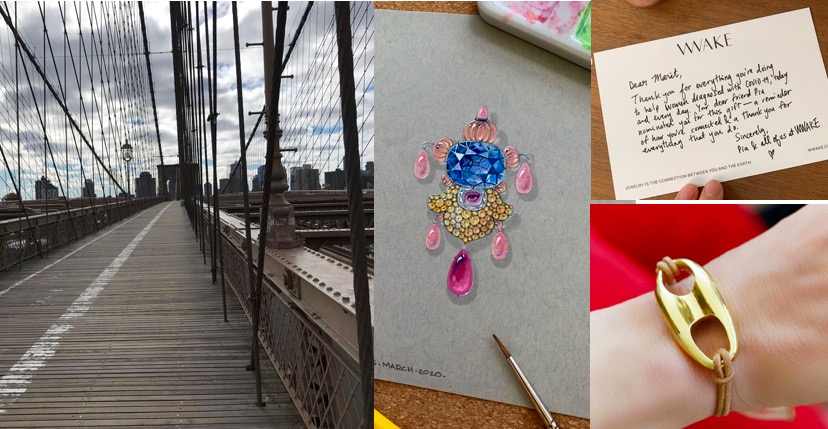 An empty Brooklyn Bridge, a new setting for the Hope Diamond, a letter of thanks and an anchor for a cause Photo

How the Jewelry World Coped This Week

April 3, 2020—In our third week of reviewing how the jewelry world coped during the coronavirus pandemic it feels like many are settling in for what is going to be an extended period. Several continued to support various causes in unique ways, some with financial donations, others by gifting jewels to medical workers. A few women shared how they took the plunge and dyed their own hair. Nature and the quiet of city streets spotted during outings for a run or necessities were other themes. Also, there has been a turn by so many to the subject of jewelry history. Bulgari perhaps said it best in the Instagram series, “When all the world is closing its doors, we open the door on our past.”

Bulgari explained why it was showing historical highlights on Instagram in the caption for the image above.

In these times of uncertainty, we want to be a source of entertainment and escapism, starting with our story.

The Bvlgari that stands before you today started as a small curiosity shop, attracting Rome’s intrigued tourists. Sotirio Bulgari opened his first store in 1884 in Rome and in 1905 he moved to what would become the most iconic address in Bvlgari’s history, at Via dei Condotti 10.

This shop was the cornerstone that allowed Sotirio to create his empire stone by stone, dream by dream and piece of art by piece of art. The Bvlgari name became known for its fine jewelry and opulent objects and with this reputation came more shops, as Sotirio ventured into Sanremo, Naples, Bellagio and Sorrento.

It was Rome that gave him the chance to realise his life’s dream, and Italy remains the constant and ever-present inspiration behind Bvlgari. Now, and always. 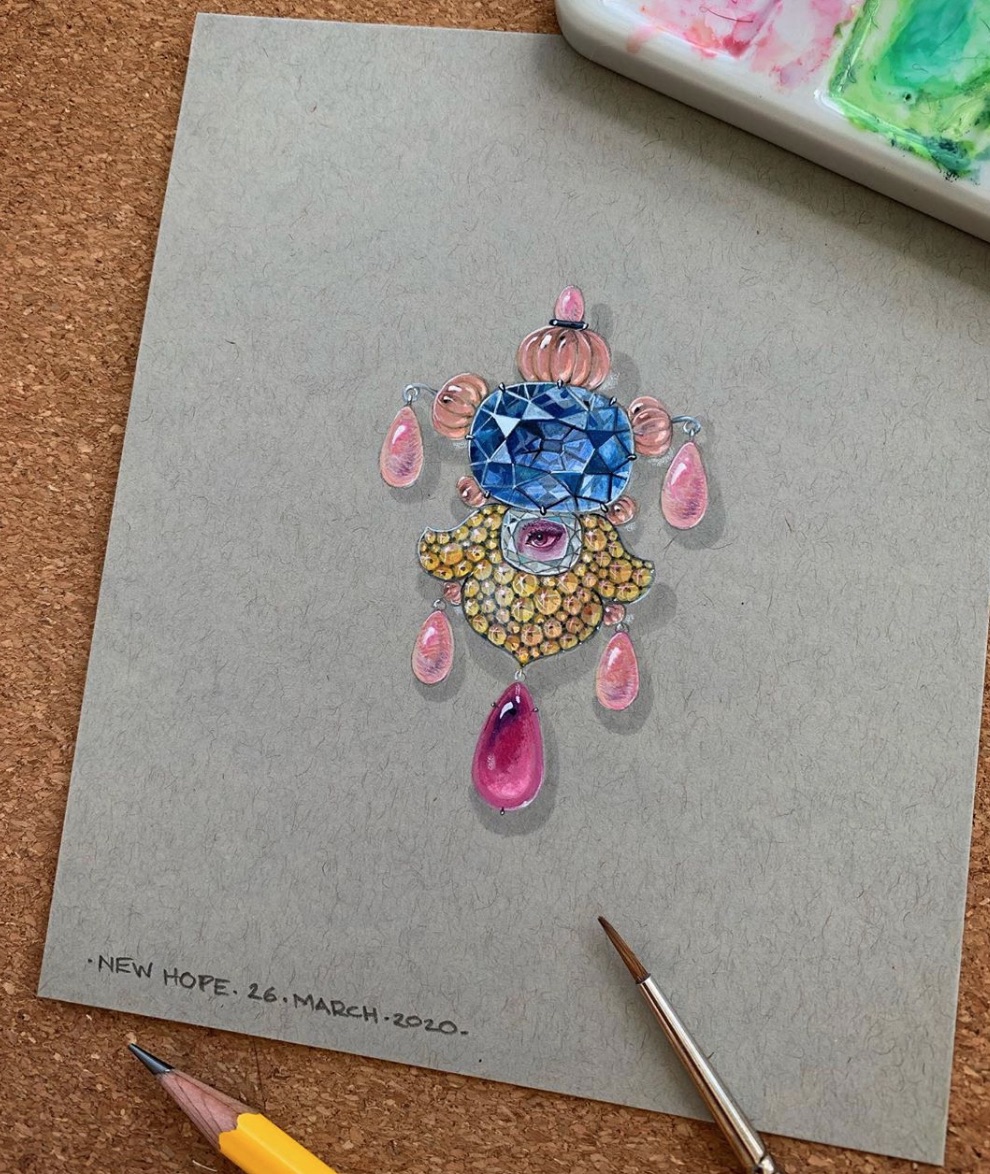 The talented twin brothers David and Michael, the duo behind David Michael Jewels who make every component of their jewels in a studio in Australia shared their new setting for the Hope Diamond on Instagram with the above rendering. Following is the story behind the piece they added to the caption.

This design is a concept for the Hope Diamond which was painted doing the quarantine, inspired by the myth that it was originally pried from an eye of a sculpted statue of the goddess Sita.

A small miniature of the eye of Sita sits below the hope diamond, and there’s an Indian sunset colour scheme to inspire hope and happiness. 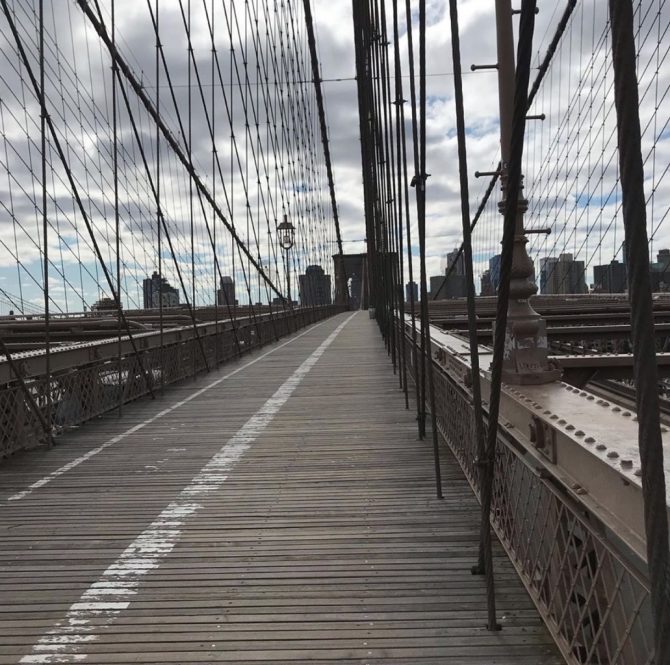 Michelle Orman, publicist extraordinaire and host of the new podcast for the Couture show, posted an image taken during her morning run on the Brooklyn Bridge walkway that is generally jammed with tourists and New Yorkers. She said “A never before seen (to me!) sight.” 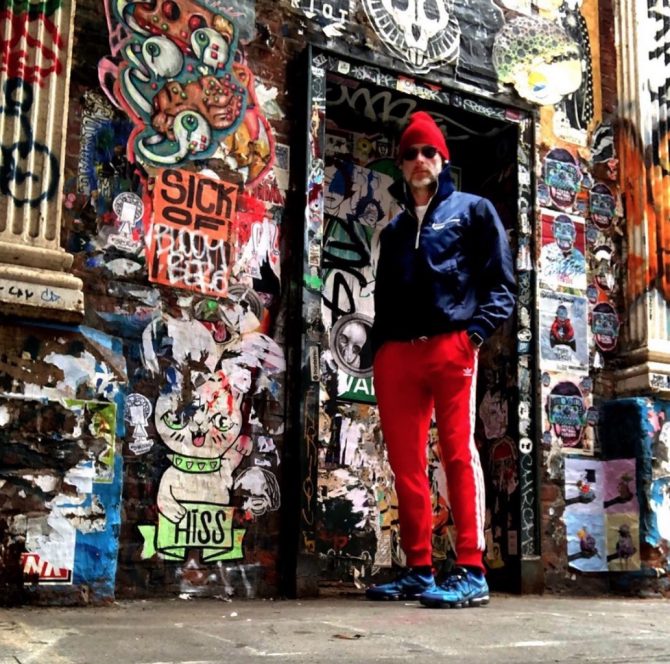 Tony Goldsberry, the founder of Rock House showroom, who represents an array of super talented designers usually fills his Instagram feed with shots of his globe trotting visiting his clients and retailers. In the last week he has been taking timed selfies around his home base in New York City in an enviable array of track suits. He titles the series #urbanhikers. 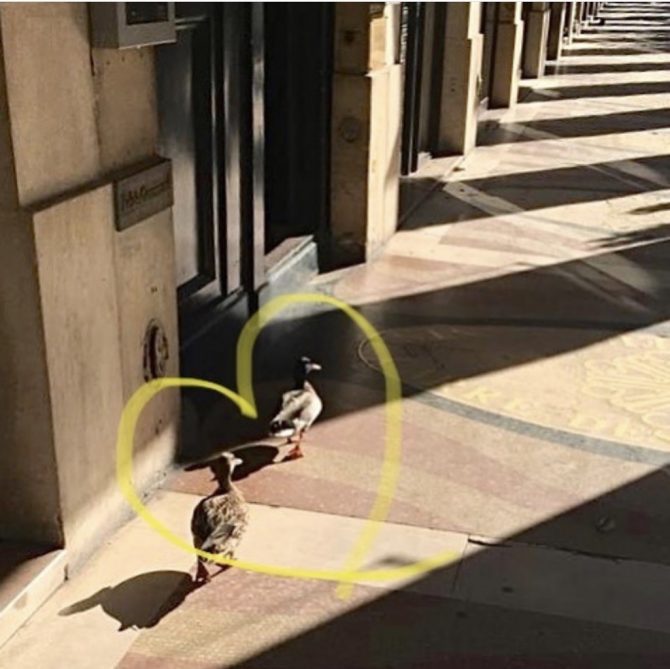 Marc Auclert of the divine Maison Auclert boutique in Paris posted the above shot of ducks who had made their way to Rue de Castiglione in the empty streets of Paris. 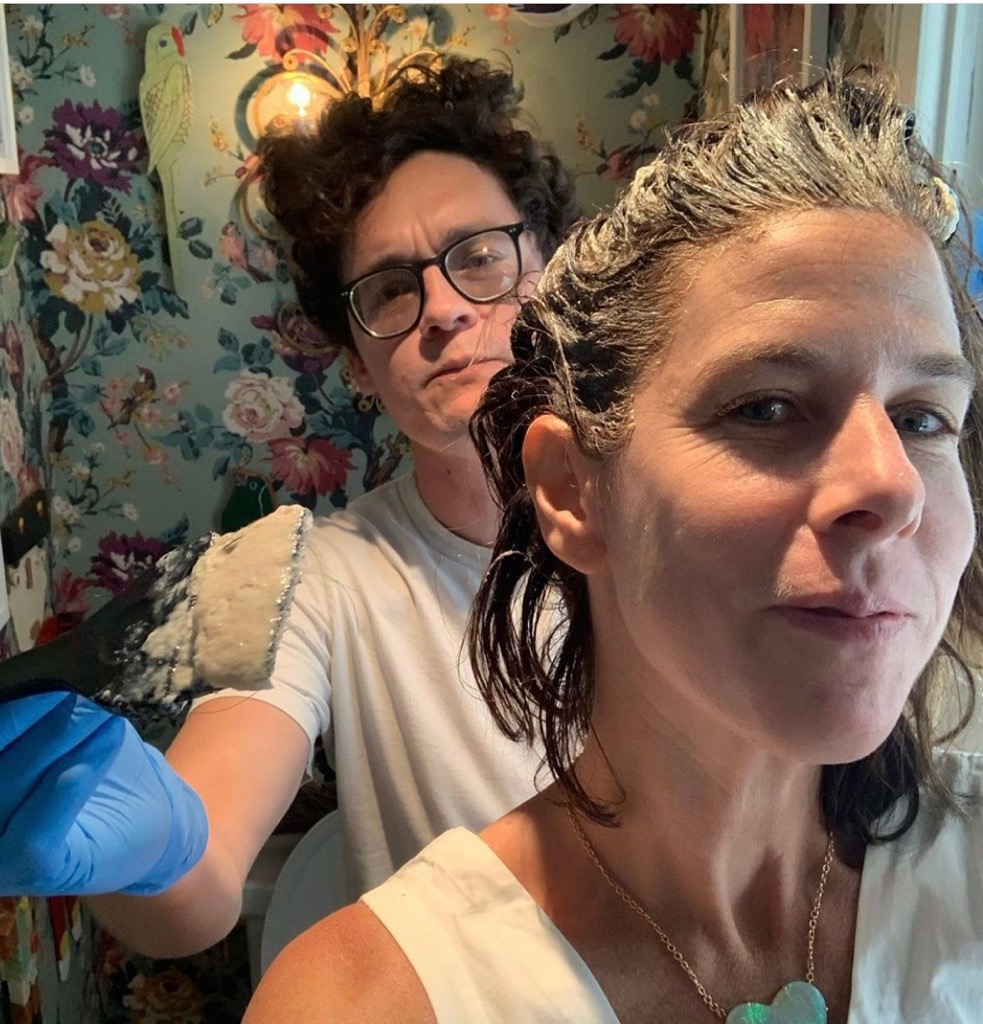 Irene Neuwirth shared a photo via Instagram of her at home dye job conducted by her boyfriend, director of the Lego Movie, Phil Lord. 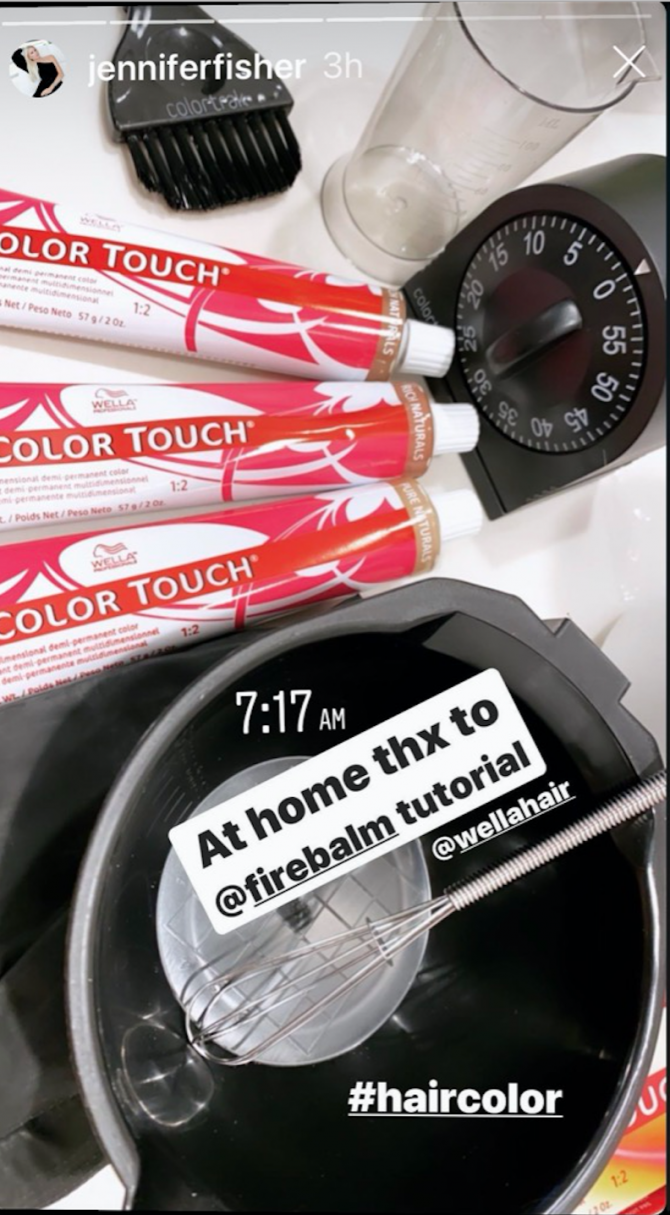 Jennifer Fisher shared the materials for her at home dye job with her followers. 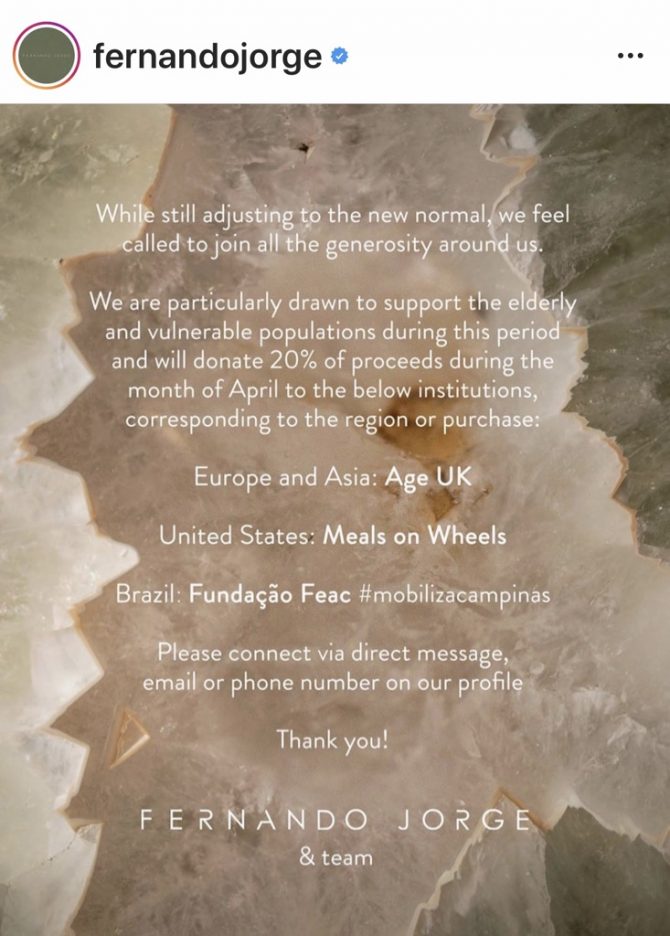 Fernando Jorge announced on Instagram in the above post that he was donating 20% of the proceeds from his sales to various charities around the world. 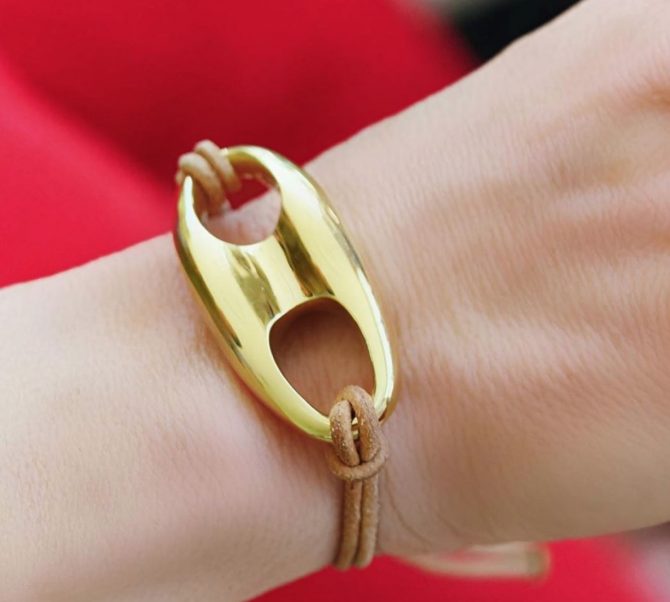 Jewelry designer Jenna Blake announced she was donating 100% of the proceeds of the sale of 10 of her anchor bracelets to the Frontline Responders Fund benefiting Flexport.org, a non-profit organization that transports medical supplies and PPE to those who need it most. 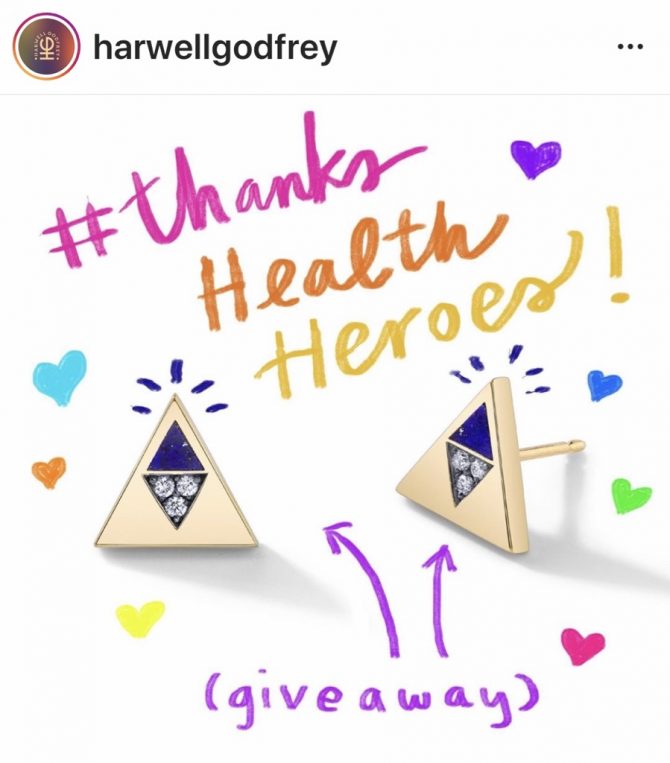 Harwell Godfrey showed her appreciation for the medical community by conducting a giveaway directed to healthcare providers.  Following is her caption for the post above:

In honor of my mom—who was not only a single mom, but a nurse as well—I’d like to do something to thank the fearless folks who are risking their lives on the frontline. Whether it’s someone fighting COVID-19 or a doctor still seeing normal patients among the madness, tag a member of the medical community here for a chance to receive the pair of 18k Gold, Lapis and Diamond earrings pictured above. I chose triangles because they are fundamental to the way we build our environments, both physical and virtual: Triangles are special because they are exceptionally strong. I’ll keep this going though Sunday, April 5th and pick one name at random on Monday April 6. 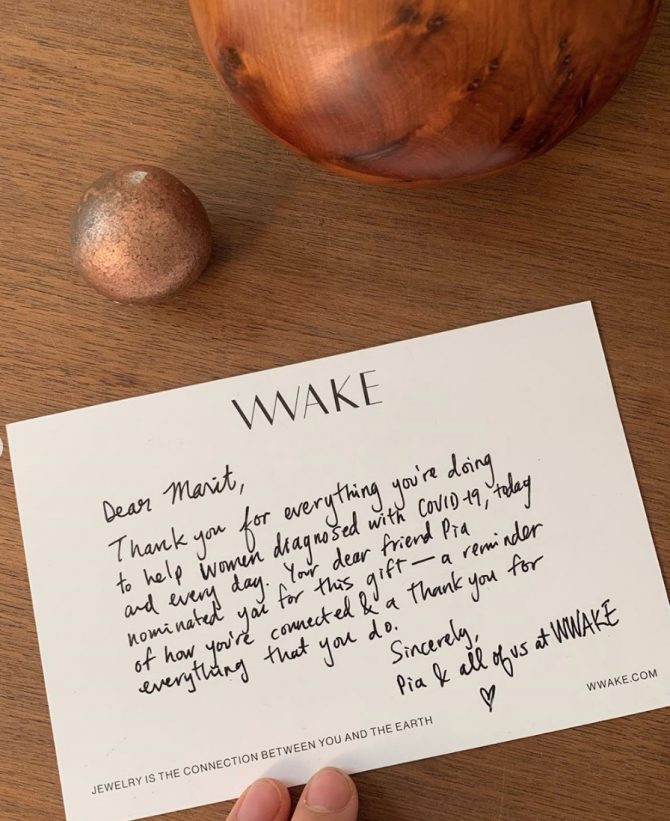 Wwake is also gifting jewels to healthcare workers as a gesture of thanks. This note was written to Marit, an OBGYN resident in the Bronx, helping to care for pregnant people and new mothers amidst this crisis, while being a mother herself. In the carousel of images explaining why she was chosen to receive the jewel a friend who submitted Marit’s name for the jewel wrote,

I have been scrambling to find masks for my dear friend Marit who is an OBGYN resident at Montefiore Hospital in the Bronx. She told me this week they have NO supplies and each day tons of Covid-positive PREGNANT stream into the hospital each day. The doctors only have one N95 that they have to try to clean and reuse each day. Marit herself has a 1 year old son that she comes home to take care of after working all day to take care of scared and terribly sick underprivileged pregnant mothers each day. My heart breaks for her and they need masks! Thank you for your campaign.

Fantasy Jewelry Shopping During A Pandemic

Jewelry to Shop Now For No Kid Hungry Charity