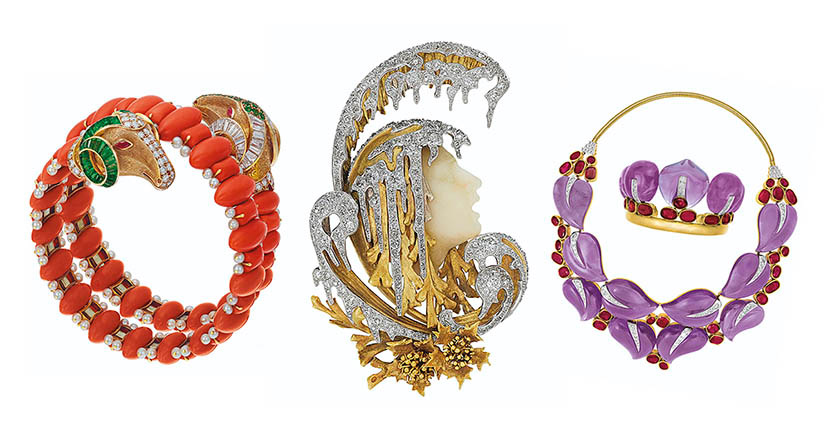 I spent over an hour reviewing the 28 jewels of Judith-Ann Corrente that are being sold at Christie’s in New York on December 11, 2019. They are not jewels with big stones that usually garner all the attention at auction previews. Ms. Corrente’s jewels are about design and ideas. Many are masterpieces.

The collection spans the great styles of 20th century with an emphasis on Art Nouveau and Art Deco work. Several are by the most daring independent names in jewelry including Belperron, Fouquet, Lalique and Vever. The most gem intensive jewels in the collection are a diamond Art Deco sautoir by Van Cleef & Arpels and an Art Deco brooch by Chaumet.

Judith-Ann Corrente posing with her husband, Willem Kooyker, at an event for the Metropolitan Opera. She is wearing her Chaumet Art Deco brooch and emerald earrings. Photo via Pinterest

Generally when you see jewels of this quality, they are housed in museums, big jeweler’s archives or are in a collection of someone who is preserving the designs as works of art for posterity. Judith-Ann Corrente wears her jewels. In the catalogue there are several photos of the statuesque beauty in the designs. Unfortunately, those images were not available for editorial purposes. But a Google image search reveals a small handful of shots of Ms. Corrente wearing several pieces in the collection being sold.

So who is Judith-Ann Corrente? The biography written by Christie’s reveals she is a woman of style and substance. Following is an excerpt. 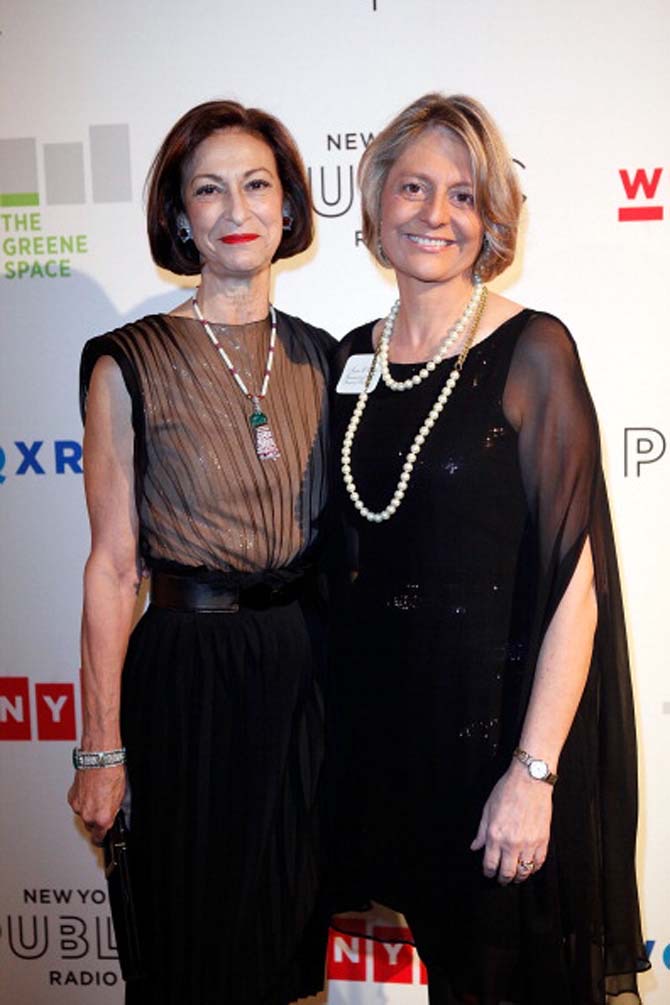 Judith-Ann Corrente has been elected to the boards of several independent schools as well as the National Association of Independent Schools, where she developed a life-long dedication to inclusive governance and equity and justice initiatives. Ms. Corrente served as Board President of the Oliver Scholars Program, a college access program for Hispanic and African American children from underserved communities in New York City for six years before becoming a life trustee. 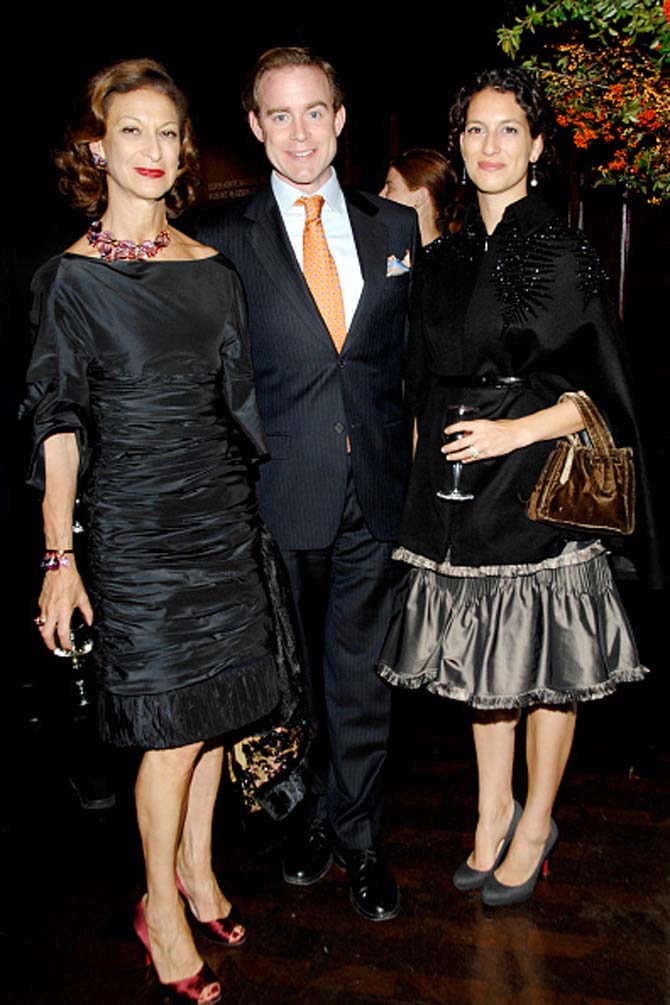 With philanthropy as a cornerstone of her life, Ms. Corrente has incorporated her great passion for the arts into her efforts. She served four terms as the President and Chief Executive Officer of the Metropolitan Opera Board of Directors from 2015-2019. She remains a Managing Director and a member of the executive committee as well as Capital Campaign Co-Chair.

Details on several of Ms. Corrente’s jewels are following. Notably, her Belperron amethyst demi suite once belonged to Dorothy Paley. She also has pieces that were originally in the collections of Babe Paley and Lillian S. Timken. These three women are among the most significant jewelry collectors in history. With this presentation of a segment of Ms. Corrente’s collection, it’s clear she is solidly in the ranks of the greatest jewelry collectors in the world. 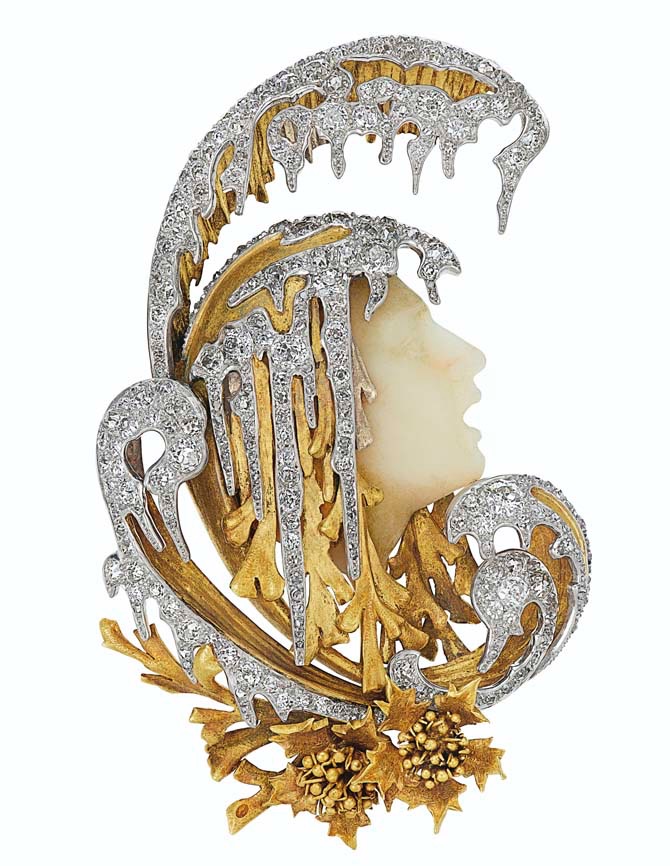 This Gabriel Falguiès pendant appears in Diamonds: A Century of Spectacular Jewels, a book I co-authored with Penny Proddow. It depicts a hard-stone carving of Orpheus singing as he floats down a river to the sea, encircled by a cresting wave of gold and diamonds. 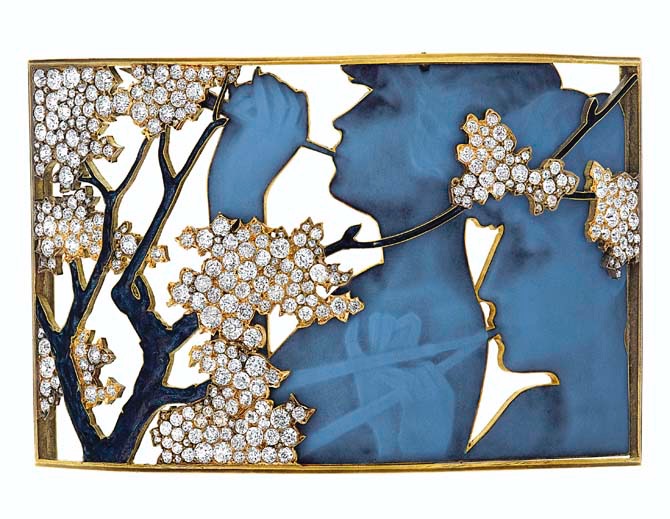 This Lalique has been exhibited in any number of retrospectives on the Art Nouveau master jeweler. It has also been published in numerous publications including Diamonds: A Century of Spectacular Jewels, a book I co-authored with Penny Proddow. The dog collar plaque shows two revelers playing their pipes in diamond woods. The design reveals the Japanese influence on Lalique’s jewelry; it has no perspective point, the composition is flat and the subjects are cropped on all sides. 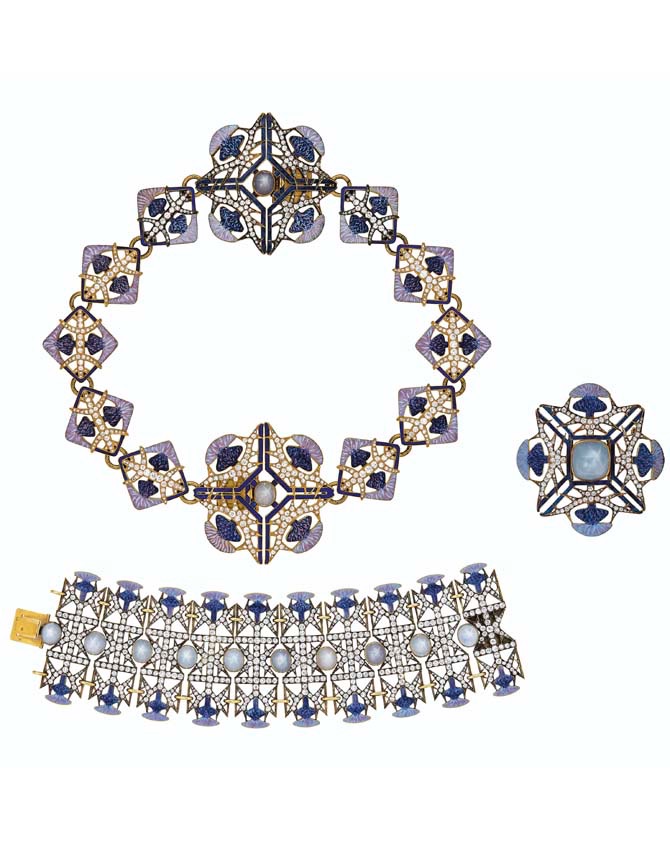 This rare Lalique suite been exhibited in any number of retrospectives about the designer and published in numerous books. 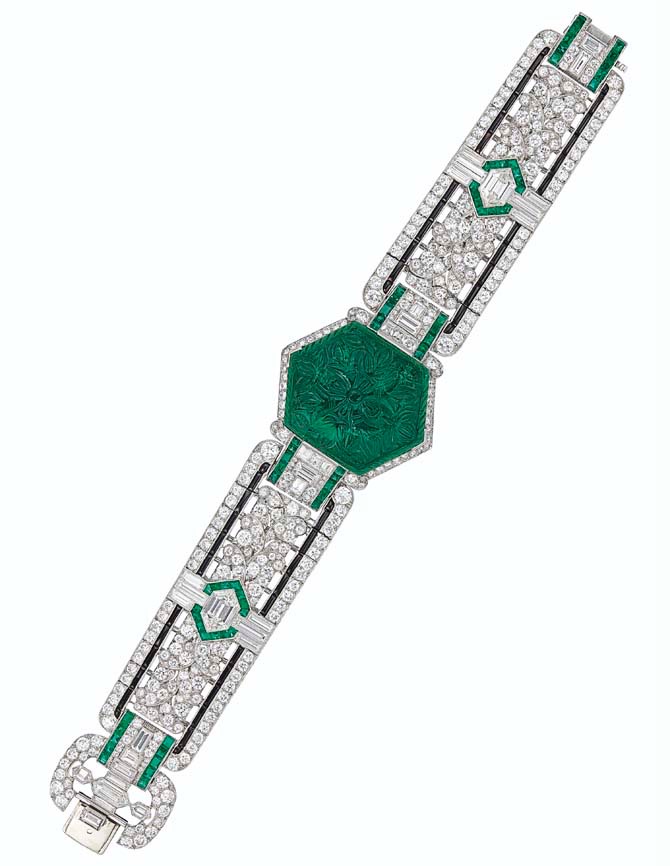 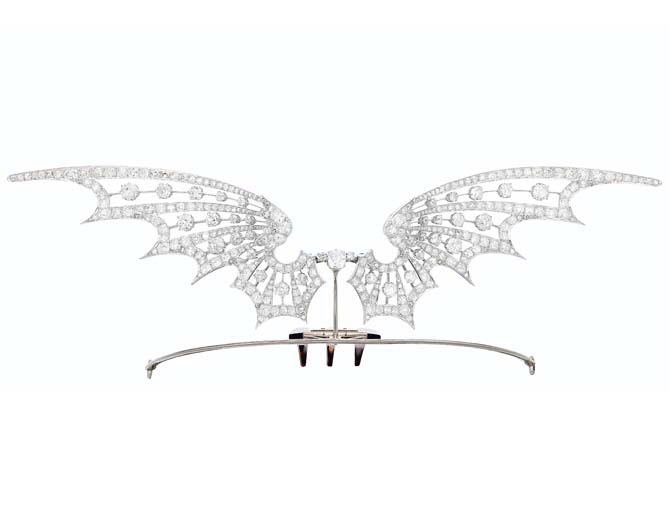 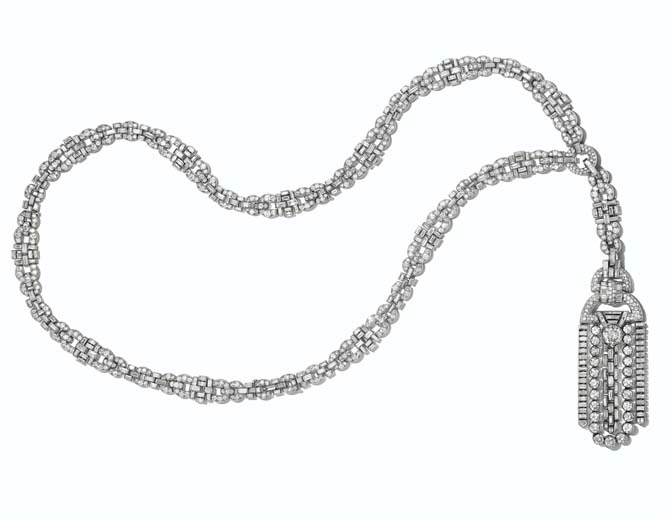 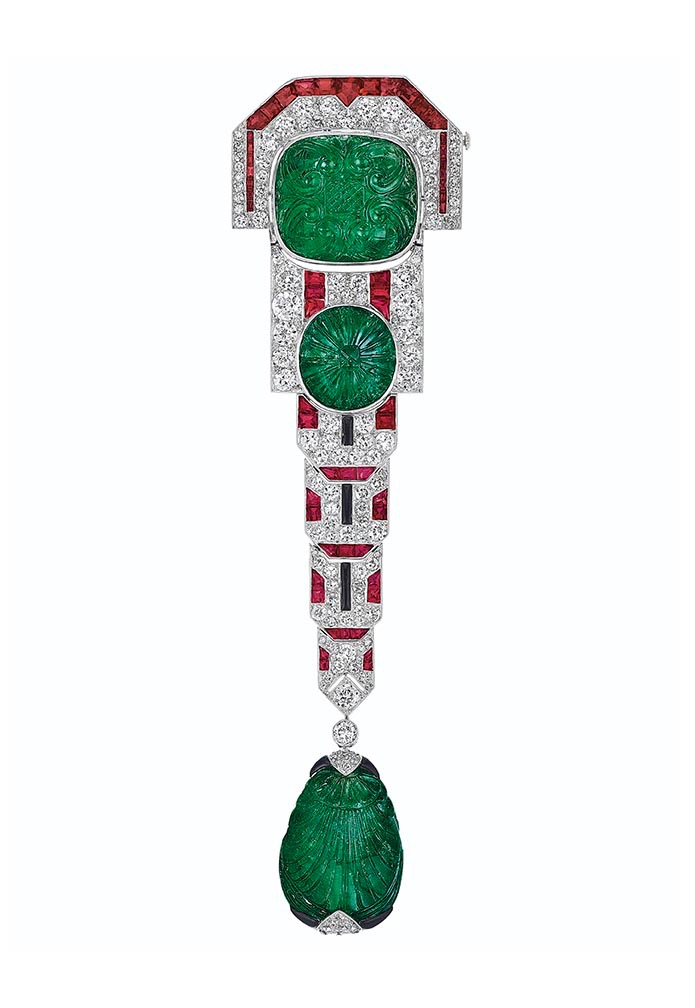 This brooch was originally in the collection of Lillian S. Timken. 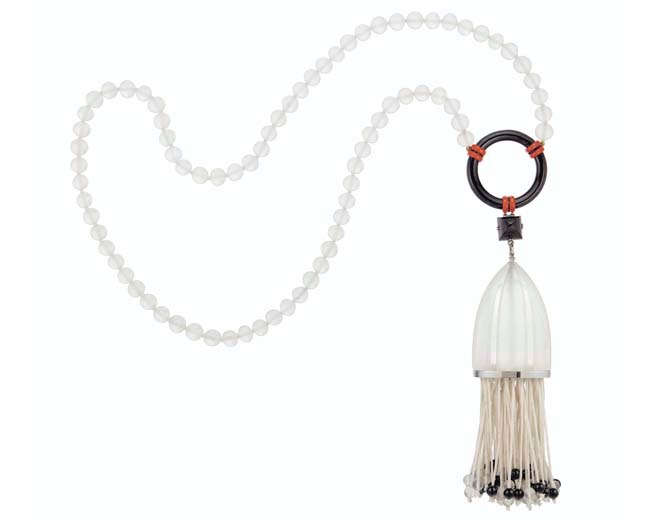 This Art Deco jewel by Georges Fouquet is similar in style if not the same piece Penny Proddow and I published in our book Bejeweled: Great Designers, Celebrity Style. During the era, Fouquet played with several motifs that were popular among the big names in jewelry like the ubiquitous seed pearl tassel necklace. Fouquet took the accessory and did it his way, with frosted rock crystal beads for the necklace, a piece of black onyx with red lacquer bands for a suspension ring, and a bunch of nylon strings with crystal and onyx beads dangling under a carved crystal dome.

This set was originally in the collection of Dorothy Paley.

It was published in the book Jewelry By Suzanne Belperron. 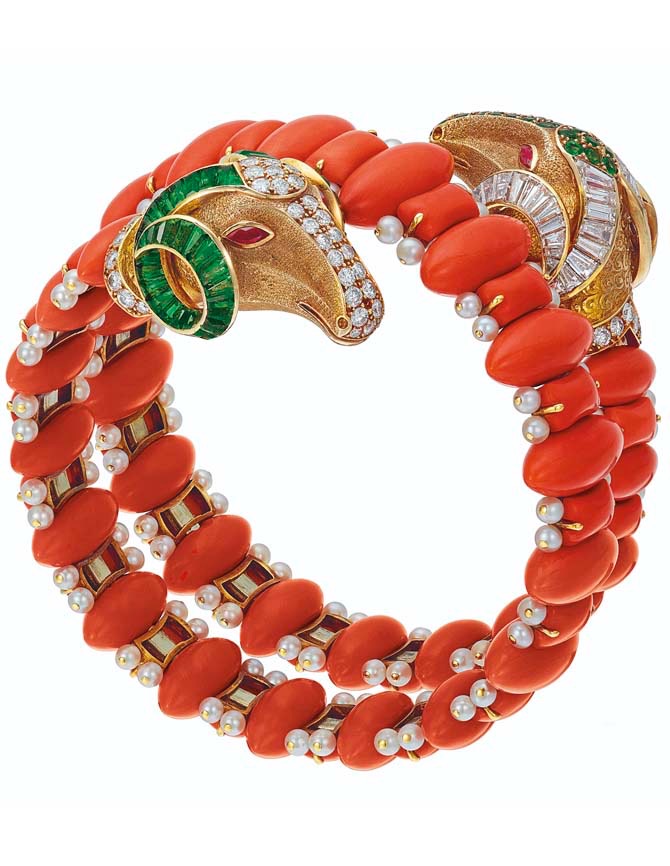 This bracelet was originally in the collection of Babe Paley. 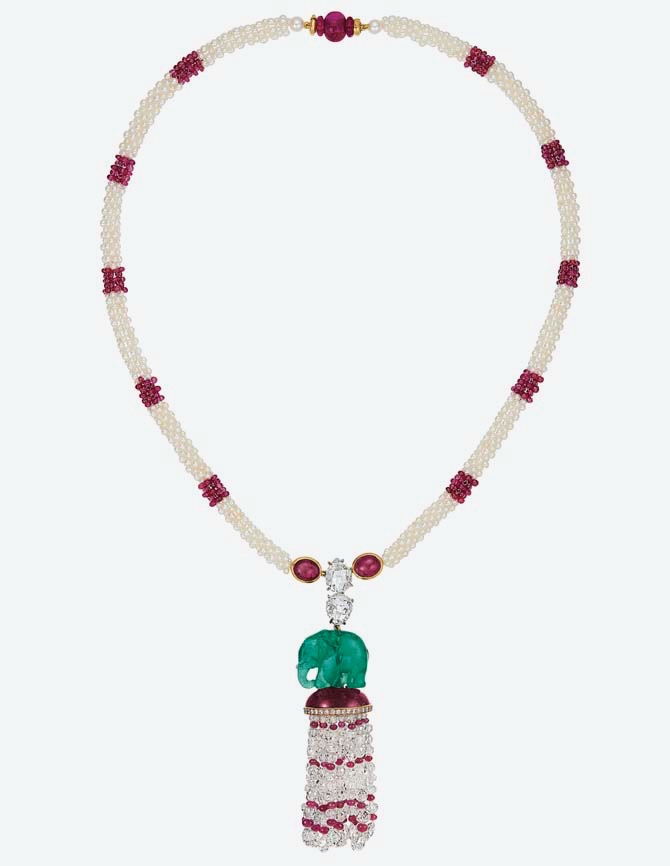 This emerald elephant necklace was published in American Jewelry: Glamour and Tradition by Penny Proddow. The pearl and ruby beads were wove by Hilda Janssens of R. Esmerian, Inc. The metal parts of the pieces were manufactured by Carvin French.

Bonham Carter Wears Her Own Jewelry in ‘The Crown’