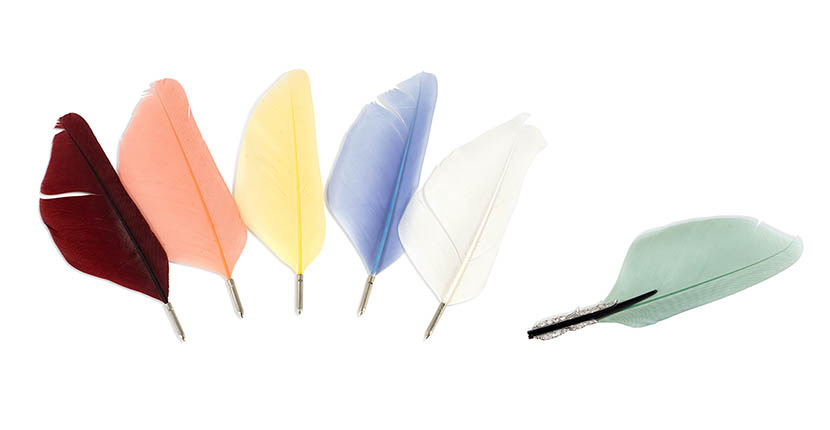 We can’t know what inspired a jeweler to create a particular piece in the past unless they left behind notes. So when none exist, we are left to rely on our own imagination to wonder what sparked a creation. Unlike designers of functional works of art—furniture, lighting, fabrics—a jeweler is more like a painter or sculptor, predominately creating for beauty’s sake because while many of us, me included, often feel that we “need” a certain object, the truth is we never actually “need” it. We admire it. We want it. We might even crave it.

The first time I saw this brooch in Kentshire’s boutique at Bergdorf Goodman I was fascinated by its originality because the Art Deco diamond, platinum 18K gold and black enamel brooch comes with interchangeable different colored feathers.

In all the years I’d spent studying and admiring jewelry in stores, antique shops, and auction houses, I’d never seen anything like it. And I couldn’t help wondering what might have inspired the jeweler at Boucheron who thought up this fanciful bibelot.

The brooch dates to 1925, a little over six years after the official end of World War I. The effects of what had been called the Great War were still being felt. France had suffered more physical damage than any other country.  Almost a million buildings —8% of all structures— destroyed.  Two and a half million hectares of farmland, 2,000 kilometers of canals, 2,000 bridges, 62,000 kilometers of road and 5,000 kilometers were also destroyed. And then there was the human toll. France suffered the greatest loss there as well. Eight million men had been called up to fight. More than 1.4 million of them had died and 4.3 million were injured.

In the midst of all the tragedy, the war had brought about a positive change. Women’s emancipation had come of age. With all the able-bodied men called up, women were forced to take on the responsibilities men had once held. And take them on they did—with bravery and fortitude.

Suddenly there were women bus drivers, gardeners, construction and factory workers, concierges, street sweepers and mechanics. Women learned how to live on their own. How to provide for their families. While their fathers, sons, brothers and husbands were off fighting, women fought as well—fought to survive and help their loved ones survive. In the process, women became free in a way they never had before.

Since the dawn of time watching birds fly has lifted our spirits. Egyptians believed birds were emblematic of sky gods and goddesses. As we have watched birds soar up into a limitless sky we have been inspired to spread our own wings and transcend the limits of our own boundaries. For millennium the feathers of those birds have been symbols of flight and freedom.

When I first looked at the Boucheron pin in Kentshire’s glass vitrine, I lusted after it because of how truly lovely, fanciful and original it was.  But now that I’ve looked back in time and understand more about the era when that now unknown Boucheron jeweler designed it, I dream of owning it because of what I’ve come to be believe it symbolizes—freedom, something that so many of us are still fighting for in so many ways, every single day.

Lust: The Against Evil Eye By Lorraine Schwartz