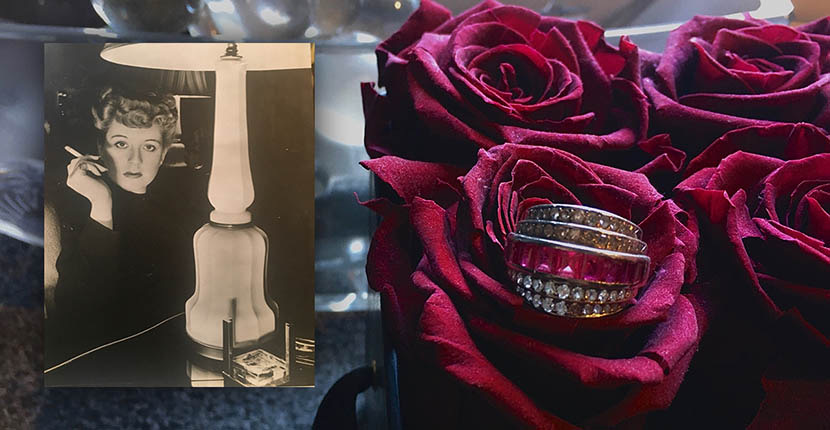 Usually it’s someone else’s jewelry I lust after. But this time the piece belonged to someone in my own family.  Or at least it had, originally.

I grew up seeing this ring on my grandmother’s pinkie.  I wonder how old I was when it first winked at me. How often did I reach out and try to capture the red/pink glint of the rubies?

My grandmother was the epitome of glamour. She was always coiffed. Disciplined. Intelligent. Creative. Independent.  And she was as cold as the diamonds in this ring and the cruelest person I’ve ever personally known.

My grandmother owned a millinery shop in New York in the 1930s. She met Picasso. Studied painting with Thomas Hart Benton and Raphael Soyer. Had a one woman show on Madison Avenue in the 1960s. She had her dresses made by a dressmaker and had a Swedish masseuse come to her for weekly massages. She hired Edgar Tafel, a disciple of Frank Lloyd Wright, to design her duplex on east 65th street in New York City. She had a butler.

She also lost custody of my 18 month old mother when my grandfather caught her in flagrante delicto with her lover at two in the afternoon while my mother napped in her crib.

My grandfather got custody. In 1930. When fathers never got custody except in the most extreme circumstances.

My mother once told me how, through her childhood, on Sunday’s she would get all dressed up on and sit on the stoop of the house in Brooklyn where she lived with her father and grandmother and aunts and uncles. There she’d wait for her mother to come and collect her for the day. But it was a rare Sunday my grandmother showed up.

Once my mother was an adult, accomplished and beautiful, my grandmother loved to show her off. She used to show off my sister and I as well. We were cute and clever. But care about us? No, it was all show. When I was twelve she told me she only pretended to love me because that’s what grandmothers were supposed to do.

And so I rebelled. I was the one in the family who didn’t play along. And she punished it by disowning me. 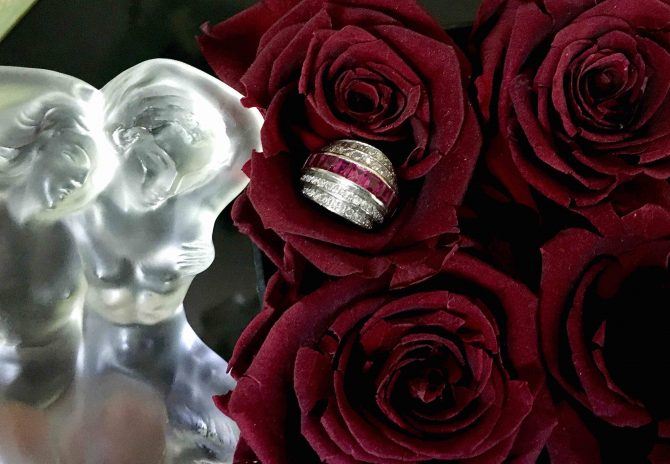 The ring that once belonged to the author’s grandmother. Photo M.J. Rose

My grandmother died shortly after her 106th birthday. Never having lost her mind, her memory or her nasty disposition. She left beautiful artwork, gorgeous jewelry and a nice amount of money — none of it to me.

I didn’t care. The one thing I would have wanted from her — her affection— her love — had been denied to me.

Then three years ago, I saw a ring that looked just like the one my grandmother had often worn, for sale on 1st Dibs. After doing some research, I learned it was in fact the same ring. The cousin she’d left it to had sold it to the jeweler who’d put it online.

Every few months I’d return to the site to see if the ring was still up on 1stdibs and toy with the idea of buying it.

Why did I this object that had belonged to someone so mean to me?

Well, there was the ring itself.

While it is unmarked, it is bears several similarities to pieces created by one of my favorite designers, Suzanne Belperron. One expert I consulted shared a Boivin sketch done during Belperron’s years there that shares many design elements with my grandmother’s ring. There are also several rings featured in the Belperron book written by Sylvie Raulet and Olivier Baroin, that echo the lines of my grandmother’s ring, especially on the sides and back.

The more I studied the ring and researched comparisons, the more I lusted after it. Yet, I remained torn. How would I feel wearing something that belonged to someone who had caused me and mother and my sister and everyone else in our family so much pain?

This March I was telling a friend about it and she asked me a question that helped me make up my mind.

“How will you feel if you walk away from it and someone else buys it?”

I began negotiating. After a round of back and forths, the jeweler and I settled on a price and we arranged shipping

After years of procrastination, the ring arrived, delivered by UPS on May 21. As I signed for it, I looked down at something about delivery date struck me. It took a moment and then, I realized May 21st was the very date of my grandmother’s birthday. She would have been 115 years old.

The ancient Burmese prized the ruby as the stone of soldiers. They believed it bestowed invulnerability. In addition to the stone’s protective powers, it reputedly helped control evil thoughts, dispel anger, and resolve disputes.

Strangely enough, since I’ve been wearing the ring, I’ve noticed my anger towards my grandmother has been dissipating.

It’s been a decade since my grandmother’s death. Long enough to let her rest in peace. Now, when the stones wink at me, I don’t think of what she didn’t give me but am thankful for what I inherited from her. My love of art, of beauty, of well-designed clothes. My stubbornness. My creativity. And of course, our passion for jewelry.