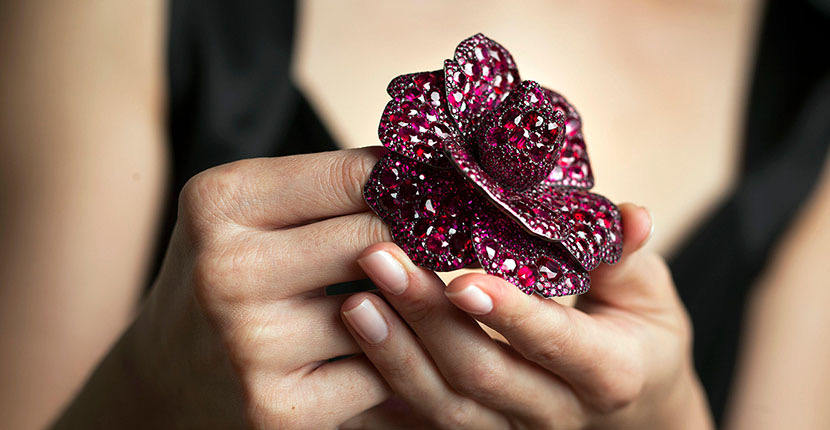 A ruby camellia brooch by JAR from the Lily Safra collection during an auction preview at Christie's in Geneva May 10, 2012. Photo Alamy

Lust: The Secret Language of Flowers in Jewelry

An occasional column about one author's obsession with dream inspiring jewelry

For years I yearned to speak a secret language. Now I yearn to wear one.

When I was a little girl, my father used to tell me stories chock full of make-believe words. The heroine of these tales was a little girl named Abakazoo, who lived in a crooked house surrounded by fields of wildflowers.

All of the flowers had strange names, and each one meant something different.

Lemrows were a symbol of love. Scoubles were friendship. Talantis were for sisters to give each other to pledge loyalty. (This one was especially important since I have a sister five years younger who I wasn’t always kind to.) There were faleance flowers. Vidance, whitler, and starlette flowers, too.

Abakazoo’s job was to pick the flowers and arrange bouquets for the townspeople who stopped by to purchase them. Her parents paid her for her efforts in kisses and lollipops.

There are no flowers called lemrows or scoubles. And while Abakazoo was not a real child, she was my doppelganger. In each of those bedtime escapades, she somehow did the exact opposite of whatever bad thing I’d done that day.

And there were plenty of those. I was a serious trouble maker. 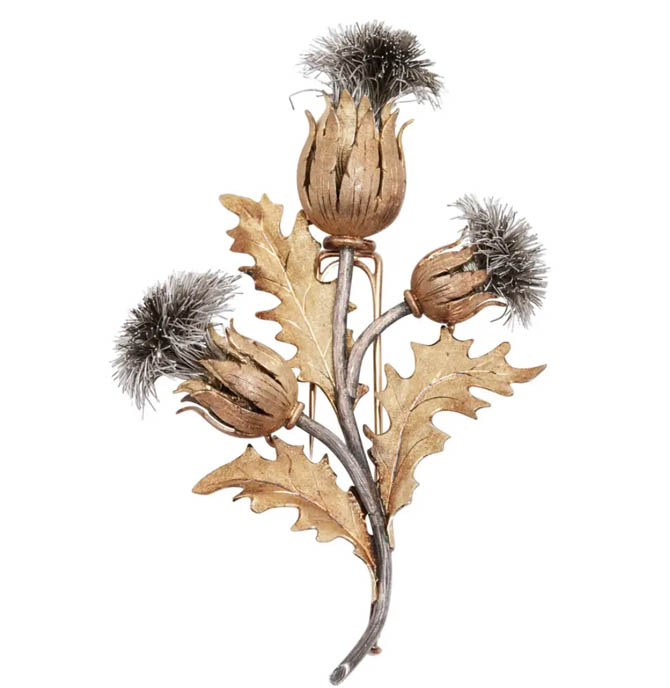 One morning, at 5 A.M., I stole a spool of white thread from my mother’s sewing box and wrapped it around the legs of every piece of furniture in the living room. The woven web was only about six inches off the floor. Low and white, it was invisible. When my mother tried to walk through the room later that day, she tripped and nearly fell into the cocktail table.

That night Abakazoo saved her mother from a terrible fall that would have injured her quite seriously.

My dad is now 100 years old and in great shape both in mind, body, and spirit. We hadn’t talked about Abakazoo stories for a long time, but I called him when I decided to write this piece and asked him how he’d come up with them.

He laughed, remembering, and recounted how the inspiration for Abakazoo had come on a trip he’d taken to Europe in the 1950s. He was in the toy business, and when he was abroad used to visit antique toy stores looking for ideas.

On one such excursion, in Paris on Rue du Faubourg Saint-Honoré, my father saw a 19th-century doll who held a bouquet in one hand and a small dictionary regarding the language of flowers in the other. The doll was too compilated to recreate for the American market—unlike the simpler Raggedy Ann and Andy, who’d he’d brought back from obscurity. But he’d been enchanted by her and the idea that flowers had a language of their own. 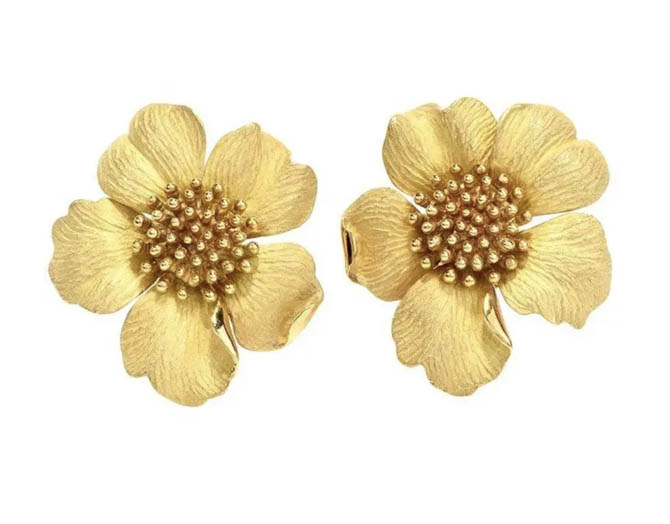 There are many arcane and hidden languages in history. One of the most romantic is the secret language of flowers. Going back to ancient Egypt and China, to the bible’s Song of Songs and Shakespeare’s plays and sonnets, we find emblematic meanings to flowers.

This method of cryptic communication is called floriography.

We know the vocabulary was introduced to England by Mary Wortley Montagu in 1717, and to Sweden by Aubry de La Mottraye in 1727. One of the most important books, Dictionnaire du langage des fleurs, was written by Joseph Hammer-Purgstall in 1809.

The popularity of floriography flourished during the 19th century. When it was not proper to openly speak of one’s emotions, messages could be conveyed through gifts of flowers. Talking bouquets also called nosegays or tussie-mussies, spoke volumes. 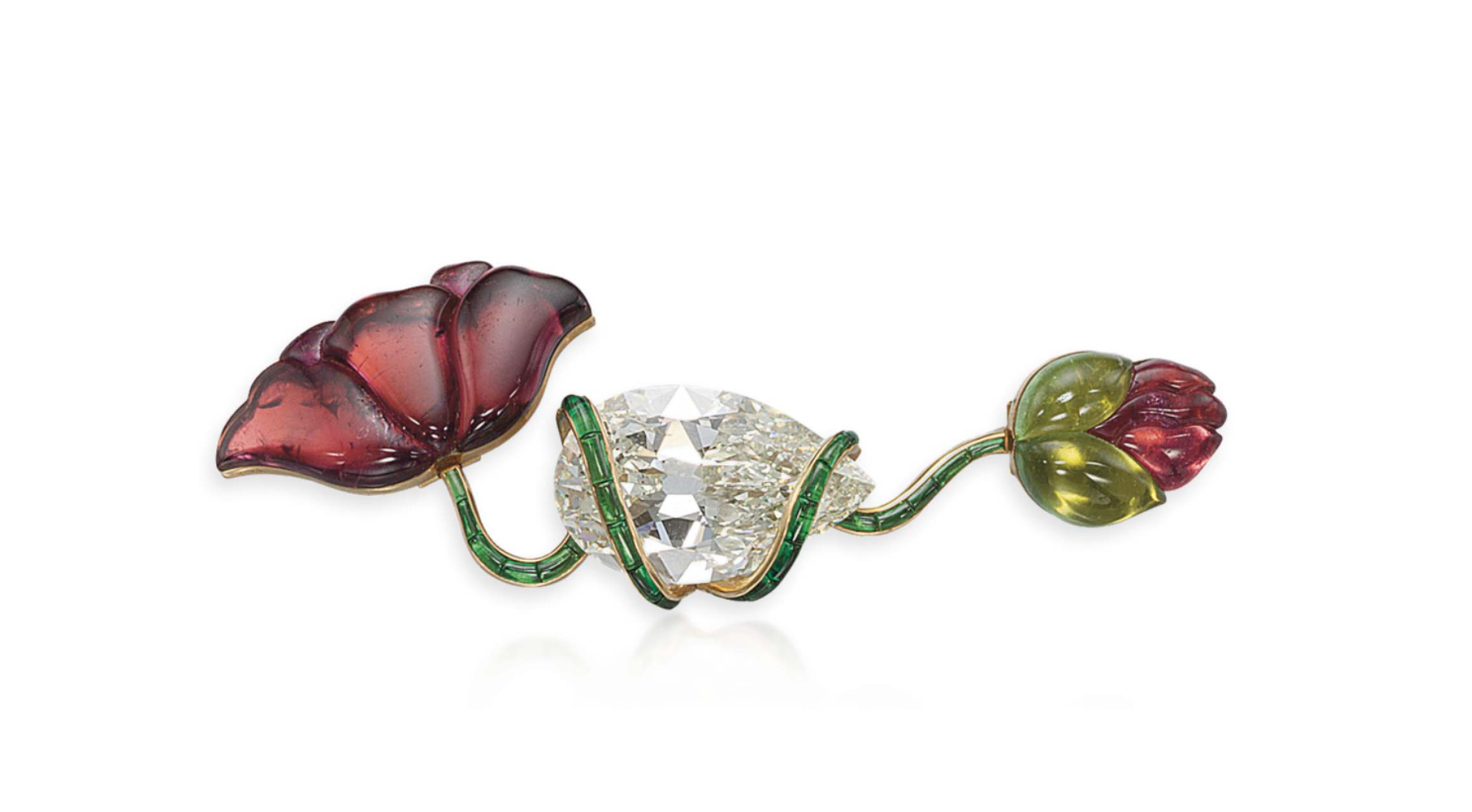 Poppy brooch by JAR composed of tourmaline and diamond from the collection of Lily Safra. Photo Christie’s

The jewelry industry was hardly immune to floriography. Rather than a talking bouquet that withered and died, an Art Deco tutti-frutti bejeweled version was a forever memento. A nosegay that promised friendship or a tussie-mussie that whispered of loyalty lasted only a few days. But a necklace or brooch with the same messages were timeless.

Looking up flowers in Elizabeth Wirt’s Flora’s Dictionary or Dorothea Dix’s The Garland of Flora, (both published in 1829) or the more current Flowerpeadia by Cleralyn Darcy you can discover how to use jewelry to deliver very exact messages.

If you want to invite someone to play, slip-on Cartier’s hyacinth ring. If you’re suffering from loving in vain, clip-on JAR’s morning glory earrings. An errant spouse might gift you with Tiffany’s Dogwood earrings to say he regrets what he has done. A Buccellati thistle brooch will encourage a friend to take positive action and find her inner strength. Putting on an Oscar Heyman pansy brooch can be the impetus to open your heart.

A dark pink rose tells someone you agree with them. A yellow rose says I am falling love with you and a white rose, like this Russian diamond one, promises that I am telling you the truth. 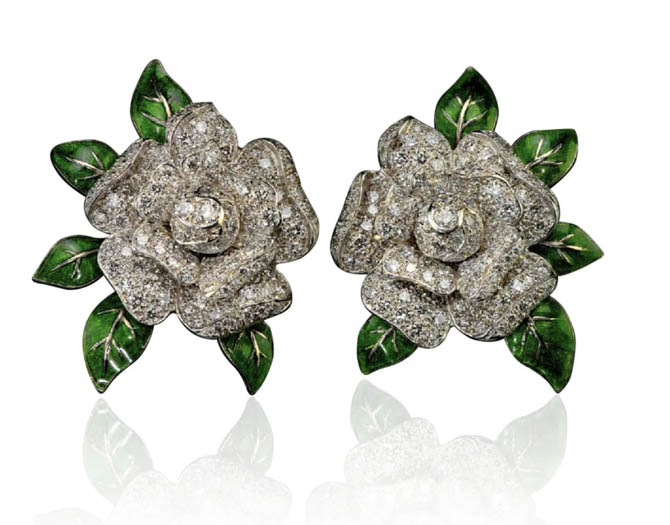 A Fouquet orchid is a reminder that someone believes in you — or you believe in yourself.  A secret love might declare themselves with Oscar Heyman’s gardenia. A rock crystal vase of Lily of the valley means be happy. JAR’s poppy brooch offers perhaps one of the most powerful messages; I would die for you.

For my birthday when I was ten years old, my father gave me an antique turquoise ring. He told when he’d seen it in the shop; it had reminded him of the Faleance flowers that Abakazoo picked in the field. It was only when writing this story that I discovered that the flowers in the ring are Myosotis, more commonly called Forget Me Not.

I don’t think that could translate into anything more perfect.