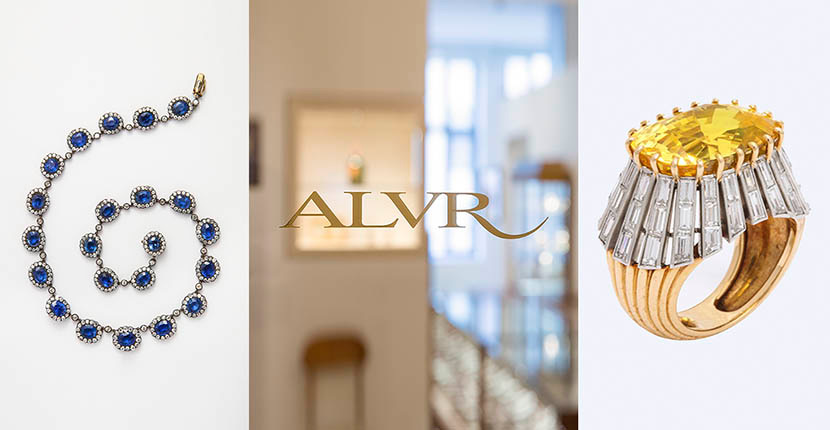 A look back at the firm’s history, current activities and future plans

Editor’s Note: A La Vielle Russie was founded in Kiev in 1851 and has experienced many world crises over the years as it relocated to Paris and finally New York City in 1941. The New York office was opened by the late Alexander Schaffer. Under the direction of brothers, Paul and Peter L. Schaffer, and Paul’s son, Mark Schaffer, the firm continues the tradition of dealing in fine art and antiques at 745 Fifth Avenue. Peter Schaffer has remained in New York City during the pandemic. He shared his unique perspective coming from a company with such a long history and also his personal day-to-day activities as the PAUSE order remains in effect in New York.

While I know it is easy to get swept up in the negativity and fear, I also know that this too shall pass. I come from a longline of optimists who have lived through some of the most difficult times in history.

When the Soviet Union dissolved in 1991, we were able to do some extensive research into the family business. We were very interested to see we had two shops in Kiev both in hotels dating back to 1851. The family left Russia in 1921, as communism solidified and moved West (Kiev being west of Moscow) and private businesses were forced to leave. The family then moved to Paris and opened up the new shop on rue du Faubourg Saint-Honoré where they stayed until right before the Nazi Invasion. However, we were fortunate to have the shop stay open and be run by an Armenian relative.

A memory I will carry with me forever is when my brother and I were on our way to summer camp in Switzerland in 1948 when we stopped in the Port of Le Havre which had been unbelievably smashed, it was devastating. When we went into the shop and into the basement we found a German helmet – no head attached – in the coal bin. It was really quite an experience to see the war so closely at such a young age.

From Paris, my father arranged to have the family brought to New York and joined the gallery here, first in a shared space on 55th Street and then in Rockefeller Center in 1933, as one of the first tenants. My father is credited with bringing Faberge to this country. Most of the collections both public and private today were built by us. Malcom Forbes commented that over 80% of the Forbes collection came from us. Alongside our collections of Faberge we have always had extraordinary collections of rare jewelry. Including some of the pieces from the Russian, Spanish and French crown jewels. 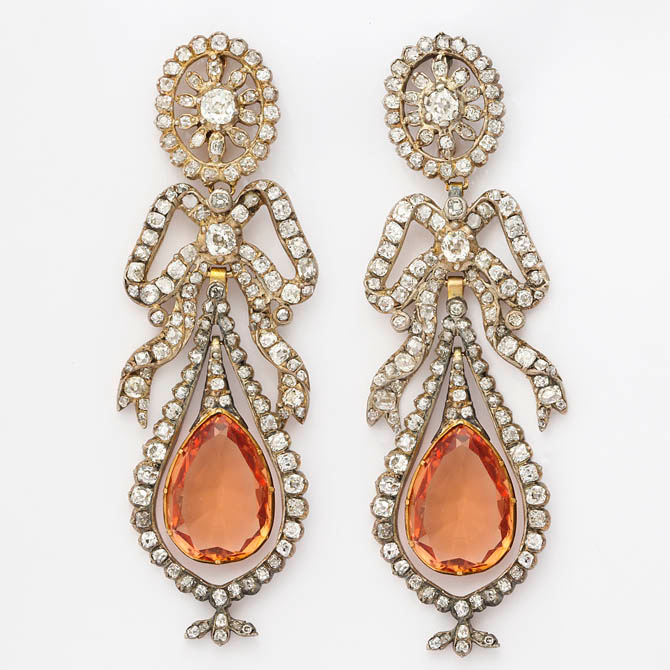 Victorian Imperial Topaz and diamond earrings from the collection of A La Vieille Russie. Photo courtesy

My father always said, there were three things to make a good business quality, price, and quantity. These principles are what he built the business on and what we are guided by to this day. In many ways, we are on a stroll through history, which is why we now have some of the most amazing pieces from the late 20th century as well.

We were once described in the Village Voice as the keeper of the largest collection of pre-signed jewelry. They had seen a few pieces in our shop and later seen the exact same piece in other shops signed by very well-known designers. This always delighted us because we never really cared what the name was as long as the pieces were great.

In our time we have gotten to know some extraordinary people including Millicent Rogers, Audrey Hepburn, Jacqueline Kennedy Onassis, Gloria Vanderbilt, Frank Sinatra, Karl Lagerfeld and Marilyn Monroe. It’s so special to have the opportunity to get to know our clients as real people, not just their public persona. One time we had a member of the British Royal family walk in by himself and ask if he could sneak out the back door.

I am often asked what my favorite pieces are and while usually my response is “the last one that sold,” we did acquire the original Verdura Lion’s Paw shell from the collection of Millicent Rogers and I have to admit that is a pretty special piece. 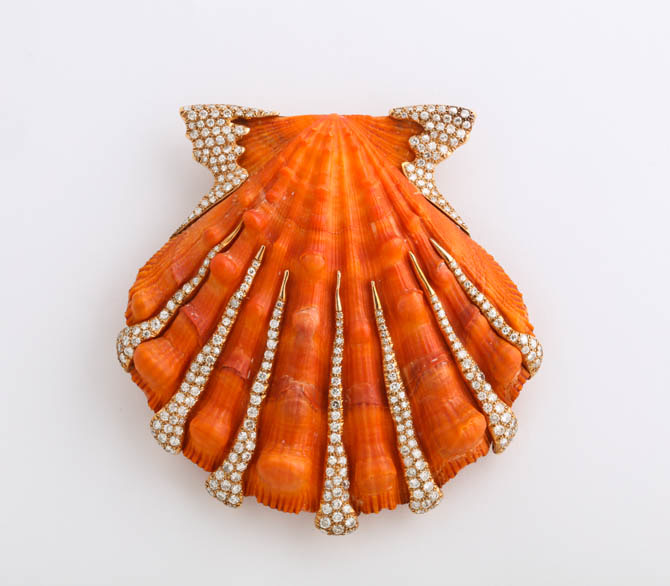 The Verdura Lion’s Paw Shell brooch set with diamonds and gold formerly in the collection of Millicent Rogers at A La Vieille Russie. Photo courtesy

The pandemic in many ways began for us during the TEFAF art fair. When it closed early due to fears of the spread of the virus, I was worried about how this would affect sales and our relationship with clients who we only connect with in Maastricht. A good portion of my weekdays now are spent checking in with clients across the globe, some we missed in Maastricht. We are lucky to have so many loyal customers and are pleased to be connected with new ones especially during this time.

At A La Vieille Russie we like to have team meetings once a week for daily and future planning as well as individual touch bases daily. Currently we are brainstorming if we will do something special when we can safely reopen. As a result of one of our team calls, Adam Patrick, of the gallery, conceptualized a new show for the Fall centering on earrings which will be very exciting. 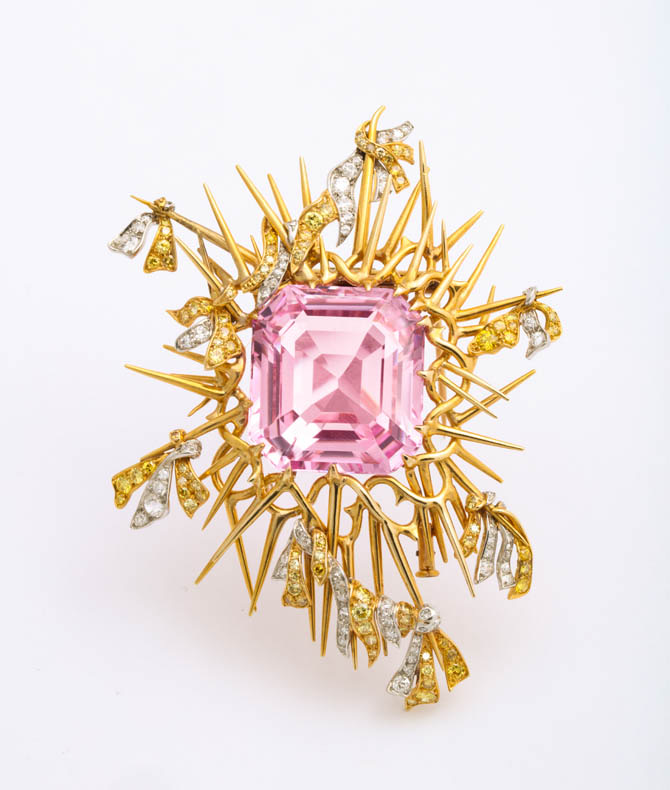 Schlumberger Crown of Thorns brooch formerly in the collection of Millicent Rogers at A La Vieille Russie. Photo courtesy

I usually walk to the office once a week to check on mail, pick up magazines, pay bills, and organize shipments to clients. Shipping is actually one of our biggest concerns right now, but we are making do. When I do step out, I am often surprised at the number of people out and how they are really making a conscious effort to keep a safe distance from those around them. I’ve also definitely noticed more cars on the roads. I think people are driving to work rather than taking public transportation, probably because they know they can park. I even took my car out for the first time in a while just the other day. Although I was just doing it to keep the battery up – and to be sure I still remembered how to drive.

When I am off the clock, I am spending quite a bit of time reading magazines, like Smithsonian, National Geographic, and Science, and watching episodes of The Life Collection from the BBC with Sir David Attenborough. I have always loved learning about space exploration, science and nature. During this time, I am putting to use all that I have learned and I am playing gardener to my collection of cacti.

Somehow the days get filled between my daily exercise and midday power nap—never more than 10 minutes—and my new hobbies, doing laundry and vacuuming. Before this pandemic I went to the acupuncture once a week, so now I take a Zoom class 3-4 times a week. I do have to say, a day that stands out is my Zoom birthday party complete with a special cake and flowers delivery. I think it is important to remain involved in things you love; I am an active member of The Huntington (in Pasadena) and The Wounded Warriors and have kept up all during this time.