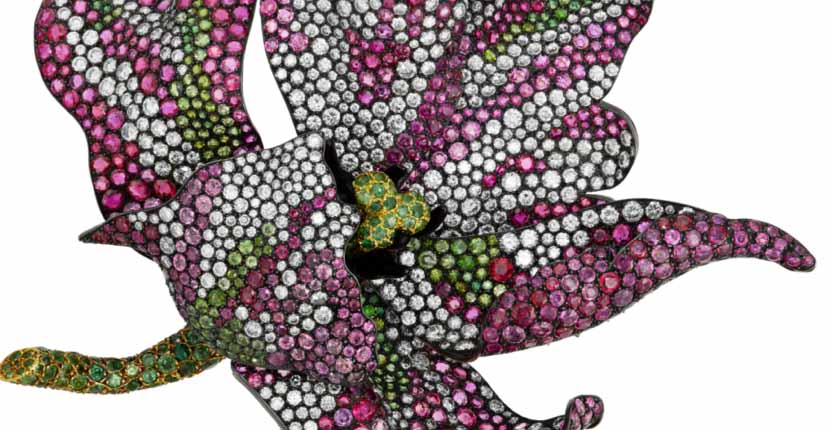 See All 12 Of Ann Getty’s Jewels by JAR

May 5, 2022—If you want to be a snob about jewels by JAR, it’s really very simple to do. And now is the time to learn how because Ann Getty’s collection of 12 jewels by JAR are being sold in Christie’s New York Magnificent Jewelry auction on June 8 and everyone is buzzing about them.

What am I suggesting about being a snob!? I know, it is out of character for this jewelry journalist. In fact, I have spent my career trying to demystify High Jewelry and illuminate the finer points of the art and craft for everyone to enjoy.

But the American designer Joel Arthur Rosenthal, otherwise known as JAR, who has lived and worked in Paris since 1977 sets the tone for his collection. And his position is high snobbery.

How does he do it? First of all, his production is limited and most pieces are one-of-a-kind. According to the jeweler, he only makes about 70 items a year. Allegedly, he only sells the jewels to people he wants to be seen wearing them.

I always find that last bit hard to swallow. I don’t know any well-heeled client who has ever been turned away. (If you have, by all means send me a word about it.) I know he strikes fear in his clients about, well, everything. But I also hear lovely stories and urban legends.

Reliable sources tell me, JAR sells costume jewels in the basement of his little shop at 7 Place Vendôme that has such discreet signage you have to search to find it. I have also heard stories about kindness to people who showed interest and didn’t exactly turn up looking like they might be shopping for big time baubles.

Shrouding his work in secrecy is another technique Rosenthal uses to add to the mystery and desire of the collection. This is the part that really irritates me. The designer doesn’t like to give interviews. He prefers for the work to speak for itself. In many ways it does and in many ways it leaves people fascinated by process—like yours truly—wanting a lot more information and specific sources of inspiration.

The most informative stories about JAR came out in 2013 when he became the first living jewelry designer, and one of the few jewelers ever in history, to have a retrospective exhibition at the Metropolitan Museum of Art in New York.

The fashion journalist Vanessa Friedman, who was writing for The Financial Times when the exhibit took place, wrote the best piece on JAR that penetrated to more of what drives and inspires him. In the story, Joel said something along the lines of while he was growing up in New York he spent all his free time at the Metropolitan Museum of Art and the American Museum of Natural History in the Gems & Minerals Hall.

When I read Vanessa’s article again while I was curating the Beautiful Creatures exhibition at the aforementioned Museum of Natural History in the Gems & Minerals Hall which featured three JAR jewels, the lightbulb went off over my head. Actually, it was more like a lightning storm.

The gems in JAR jewels, when he established his style by the late-1980s, were unlike the conventional High Jewelry on the market at the time featuring rubies, emeralds, diamonds and sapphires. Joel dipped into the entire paintbox of gems. The same array of colors seen in the displays at the American Museum of Natural History. JAR jewels stood out as something so special and different because the designs had a realism and natural quality that extended to the gems.

It’s a shame Joel chooses not to elaborate on his work more, because he invented a new vocabulary for jewelry and inspired generations of designers to be wildly creative and take risks with materials in High Jewelry. Of course, Joel draws heavily on shapes and silhouettes of 18th and 19th century designs as well as Indian Mughal styles and there might be a bit of Verdura in there too. But overall, he is an absolute American original.

So, you want to know how to be a snob about JAR jewels?

Most experts are of the opinion that his early work, the jewels made during the late 80s and through the 1990s are the best of the best of his illustrious career. They mark a time when he really stood alone as the Prince of Pavé with his artistic vision of jewelry.

If you really want to show off say, “I prefer the JAR jewels covered in the book JAR Paris, Volume I. Things are different in Volume II.”

Luckily for all us jewelry lovers who like to see it, and collectors who want to buy it, the glory days are when Ann Getty acquired her 12 pieces of JAR jewelry you see in this post that are going on the auction block at Christie’s in New York on June 8.

Mrs. Getty, majored in anthropology and biology, became a publisher and was on the board of many art institutions including the Metropolitan Museum of Art. Several of her jewels had very personal meaning to her as well as being beautiful designs.

According to Christie’s: The Tulip brooch is a nod to Mrs. Getty’s Dutch heritage. The Zebra brooch evokes her numerous anthropological digs across Africa. The Fleur-de-Lys brooch is a testament to her respect for craftsman and artisans. There are many flora-inspired pieces that allude to her love of botany and her mother’s gardens.

Ann Getty’s granddaughter Ivy, told my friend Lynn Yaeger of Vogue, “After I was born, my grandmother got everything that was green. I think this one [the multi-gem and diamond leaf brooch] had to do with me—it reminded her of ivy leaves.”

In the Christie’s notes for the sale of the collection there are a few words about Ann Getty from Joel Arthur Rosenthal: “From the very beginning, this lady, you, dear Ann, imagined the future of my imagination, seeing and picking the cherries that became your collection…” That is his entire statement.

I am sure these words are heartfelt. It would just be so wonderful to know a bit more.