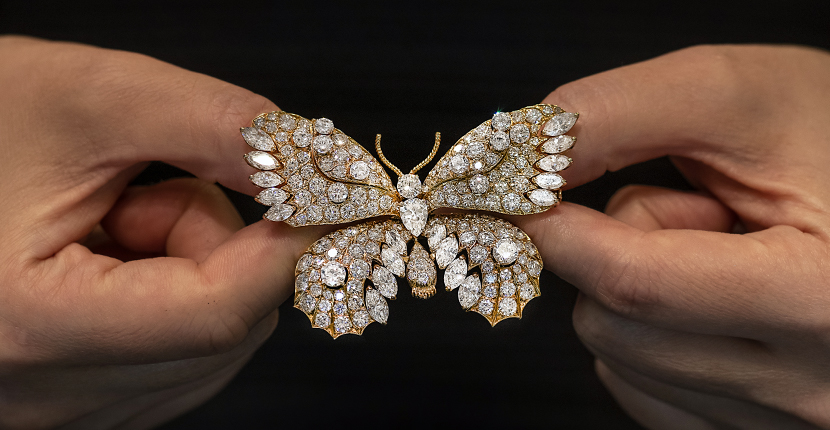 Swooning Over Jewelry at The Winter Show

April 8, 2022—I had a very noisy time at The Winter Show this week, literally sighing and gasping out loud several times. Open until April 10, the Winter Show fills five floors of what used to be Barney’s New York flagship on Madison Avenue and 60th Street. At the location, there are a few wires dangling from the ceiling and ripped up walls in certain parts as well as signage for Fred’s restaurant and mannequins some dealers put to use. None of it distracted from what was in the jewelry displays that sparkled plenty.

I gave my first audible exclamation at Kensthire over a truly magical jabot. The French black opal, diamond, and emerald morning glory posies, wrapped sapphire stems in platinum. Its symmetry, something many Art Deco pieces share, is what makes it so astonishing. According to the scientist Alan Lightman, “Symmetry represents order, and we crave order in this strange universe we find ourselves in… [It] helps us make sense of the world around us”.

While at Kentshire, don’t miss this Retro OMG brooch attributed to Paul Flato. But honestly could this 1940s bejeweled hand wearing an amethyst and ruby ring and bracelet be anyone but Flato with all the panache and style that he imbued in his designs?

Also, at Kentshire is an extraordinary antique gold and faience Egyptian revival Masonic tour necklace with enamel snakes, the faience scarabs, fish pendants and other symbols evoking the cult of Isis, with engraved diamond-shaped plaques detailing places visited on the tour along with the dates. The centerpiece detaches and may be worn as a brooch.

Another truly jaw dropping and exceptional Egyptian revival necklace is at A La Vieille Russie. The jewel made around 1870 has faience and hardstone strung on gold wire.

According to the experts at the esteemed establishment the design takes inspiration from “Egyptian ‘wesekh’ style necklaces, a term meaning ‘broad one.’” The silhouette of the jewel is the same as ancient floral collars. Interestingly, the piece was retailed by A La Vieille Russie around 1950, proving yet again that the jewelry world pioneered the idea of a circular economy.

Another show stopper at ALVR is a lapis lazuli and turquoise enamel cocktail ring.

Made around 1920 the piece has French import marks but the experts believe it is possibly Austrian and one look at the jewel makes it easy to see why they think so.

On display at the Didier booth are amazing jewelry works of art from artists Salvador Dalí, Georges Braque and more. There’s a case of jaw dropping necklaces and earrings by Louise Nevelson.

But it was a small Alberto Giacometti brooch made of bronze—with its grace and style—that was the stand out for me. The jewel was part of a series originally commissioned by fashion designer Elsa Schiaparelli in the 1930s.

At Simon Teakle I was captivated (again!) by Art Deco. In this case it was a diamond and platinum Mauboussin watch.

It may be a little hard to see in the fabulous photo but there is a black onyx ‘tree of life’ working its way through the 8-carat diamond bracelet with its teeny tiny center watch.

We also made a discovery at Simon Teakle. Their 1960s Bulgari butterfly with over 20 carats of diamonds appears to be the one featured in a 1964 photograph of Nicoletta Rangoni by Joseph Leombruno, which happens to also appear in Marion Fasel’s Beautiful Creatures.

I’ve always thought jewelers are similar to sculptors—just on a different scale—and these earrings of Eros riding a dove, at Véronique Bamps Monaco, are a perfect example.

Made by Giacinto Melillo circa 1870 they are Archeological Revival earrings inspired by examples created in the 3rd century BC currently in the Metropolitan Museum of Art. Melillo was Neapolitan. At the age of 16 he worked as director of Castellani’s workshop and took it over at the age of 25. As these earrings attest, he was a master in granulation and filigree.

When you walk into the aluminum foiled walled booth of S.J. Shrubsole (1st prize for creative decorating) a rare 1980s, gargantuan two-color gold link necklace by Paloma Picasso for Tiffany immediately grabbed my attention. It seriously gives being chained a whole new meaning. And if I wore it, I know it would make others ooh and aah the way I did throughout the Winter Show.