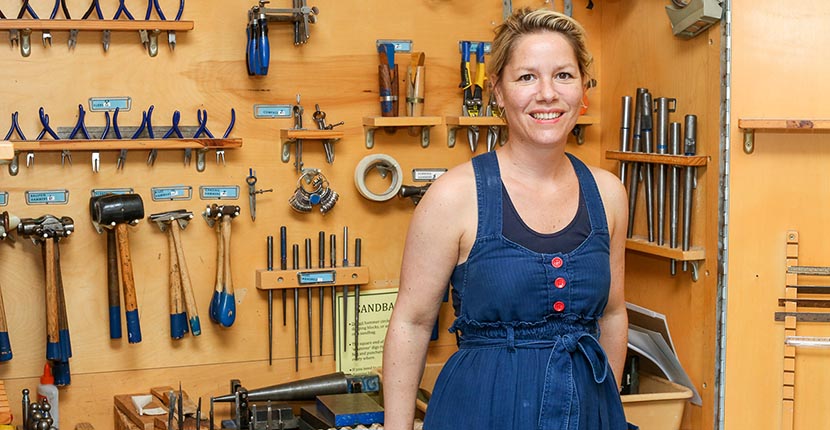 Ineke Heerkens, the 92Y Jewelry Artist in Residence, poses in one of the studios at the Jewelry Center. Photo Rod Morata: Michael Priest Photography

The Jeweler in Residence at the 92nd Street Y

The 92nd Street Y is one of New York City’s great cultural institutions. It is well-known for its conversations with celebrated authors, actors and activists. Music and dance events can be seen at the Y’s incredible performing arts center. Classes in any number of creative arenas are taught in the expansive hands-on studios and workshops.

Like everything at the Y, The Jewelry Center, is something really special. It’s the largest program of its kind in the United States offering 60 jewelry making classes a week in areas such as enameling, goldsmithing and silversmithing. Technique, however, is not all that’s taught. The brilliant Director of the department, Jonathan Wahl, has imaginatively expanded the program beyond the workbench to include conversations on any number of jewelry topics including history, collecting and the New York manufacturing scene. He also conceived the Jewelry Artist in Residence program that is in its second year now.

Jonathan was inspired to create the unique Residency Program by a couple of things. “As an artist myself I love the idea of a residency in a city and how it can stimulate work,” he explains. “I was also thinking of the International Jewelry Fair in Munich where jewelers who trained in art schools get together and dive into ideas of aesthetics in a way we don’t in New York. I wanted to bring someone into the Jewelry Center that was along these lines to add another facet to the conversation here.”

The Amsterdam based jeweler Ineke Heerkens was chosen for the Y International Jewelry Residency program from any number of candidates by a jury including Jonathan, yours truly, Kathy Chazen, 92Y Board and Jewelry Center committee member, Ulysses Grant Dietz, Chief Curator and Curator of Decorative Arts, Newark Museum and Barbara Paris Gifford, Assistant Curator, Museum of Arts and Design. She will be in residence at the Y from August 22 to September 23, 2018. Her time will culminate with two full day workshops.

Find out more about Ineke and her ceramic and fiber jewelry in our interview below. 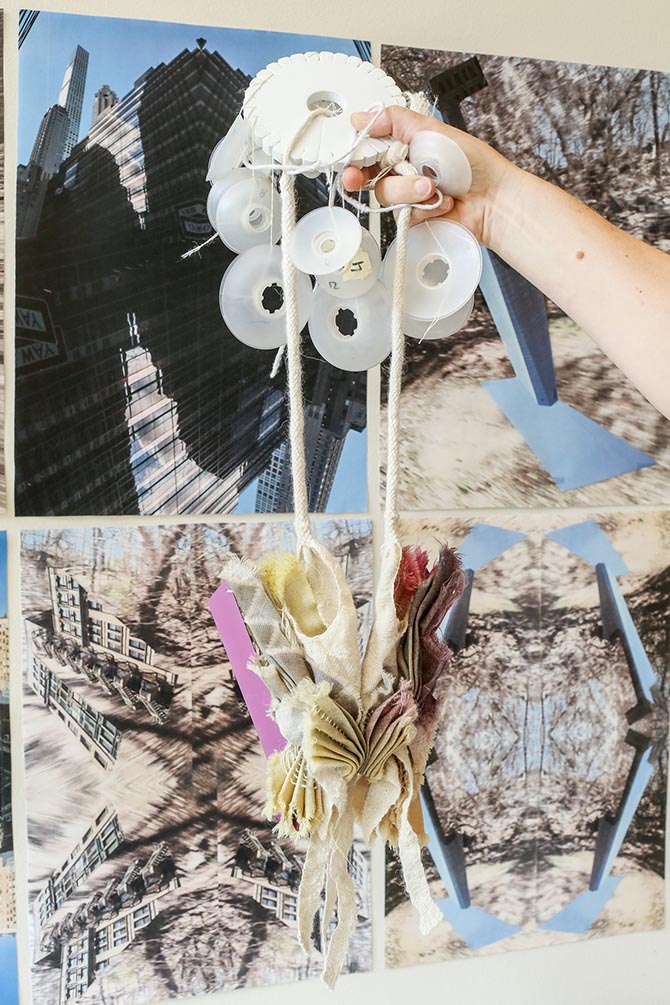 What inspired you to become a jeweler and work in the way you do?

In high school I learned about textiles which was quite unusual in Holland. You usually have painting or drawings, but my hometown had quite a lot of textile factories. I went to Gerrit Rietveld Academie in Amsterdam, an arts school where I thought I was going to do textiles, but then I discovered the jewelry department.

The jewelry department at the school, has been around since at least the 60s, when there was this whole movement to be rebellious and to see the preciousness in worthless material. The idea is that you can give a certain kind of value to the materials that you find or create.

I also liked jewelry because it is a kind of communication piece to the outside world on your body. Jewelry, if you wear it, people see it and ask you about it. I enjoyed those ideas.

Why did you want to pursue the artist in residence program at the 92nd Street Y?

I wanted to feel the energy from the city. I was here for the first time when I was 10 years old and I think that is part of the magic of the city for me. I think it was the first big trip I made with my parents.

I remember seeing Mondrian’s Broadway Boogie Woogie at the Museum of Modern Art. I went to go see it again first thing when I arrived on this trip. There is this story that he was out dancing every night with Peggy Guggenheim when he made the painting. I found it very interesting when I was 10 and I still do. He said what you do in your daily life, dancing is the same as how you paint your paintings. The same rhythms or the same patterns that you do over and over again.  His work is abstraction but you still see the square blocks and the lights. This translation is very important to understand art in general and Dutch design is still influenced by this way of thinking. 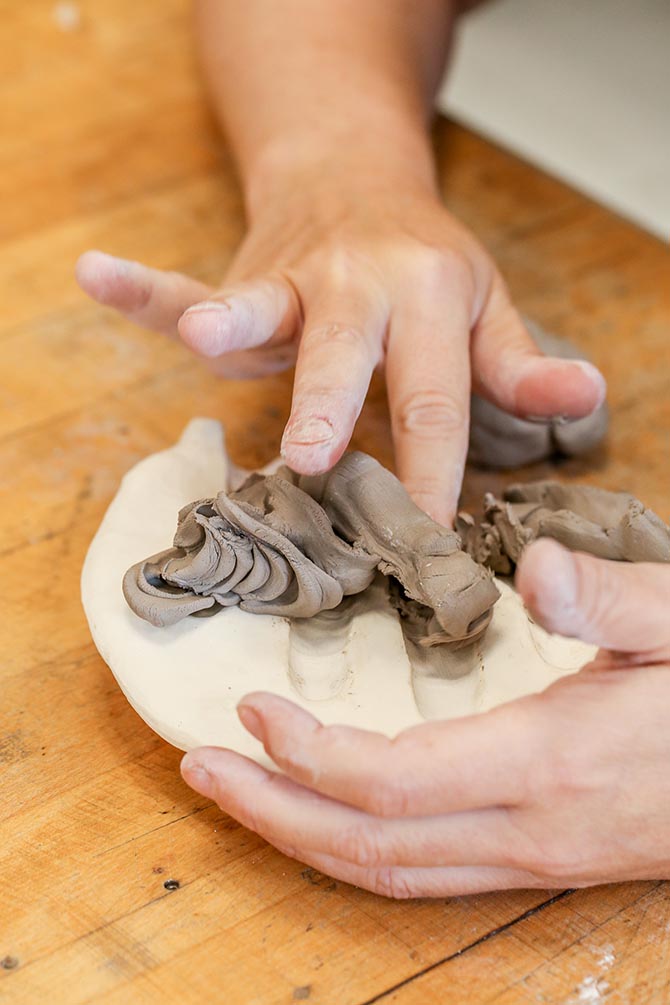 Can you describe your aesthetic and process?

My aesthetic is organic. There is a lot of movement in it. The feeling of movement. I think it is important to find the best color to it.  The color takes over where I am. It is interesting for me to be here where the color will change. I see a lot of blue. It is also very tactile. You can see the shape of my fingers in a few necklaces. It’s a representation that reflects the tactility.

The process begins when I take photos and make collages and work from that. Images I have already assembled here include photos I took on a moving train on the way to visit a friend in the Hudson Valley. I have blended them with architecture images in the city, which can be quite static. Now I look at them and I don’t know if I will be inspired by the shadows of the buildings or the shapes of the clouds. I search for the resistance.

It is hard to control ceramics. It can break in the kiln. I can’t tell beforehand what is happening. It is a growing necklace. There is a lot of push and pull and break.  It’s sort of like the energy of the city.

In your proposal you talked about collaborating with the ceramics and dance centers at the Y. How do you see these ideas being executed now that you are here?

I was already in the ceramics department for practical reasons. Tomorrow, I meet with an interpretive modern dancer. I will ask her to investigate an expression of how you experience the city and making a daily movement, maybe bigger than normal, and I will see what comes out of this. It will be a lot of try outs because it will be my first experience. I really don’t know what will happen, but that is the most exciting part. Maybe in the end I will only use photos to make an image out of it. Maybe I will work with her and make a body ornament. I don’t know if it will be a performance or just an image. I have to figure it out. 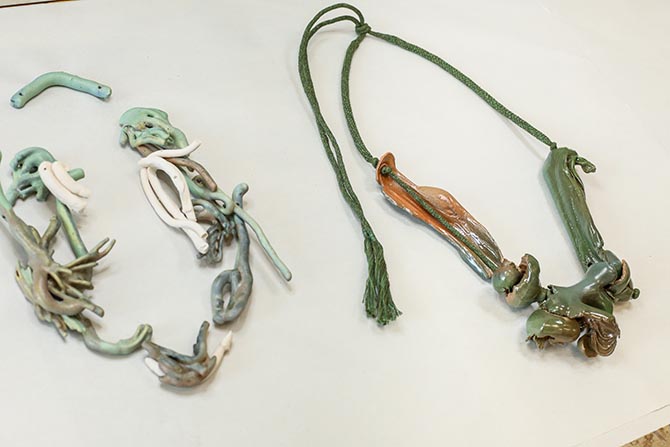 When you work do you listen to music?

I listen to dance music. Officially on Spotify, it is “Neo Soul Funk and Hip Hop.”

With tracks like that maybe you will end up with Hip Hop on Lexington sort of like a new rendition of Broadway Boogie Woogie?

Yes, sort of. I’m looking forward to assembling my beads into a New York necklace, as Mondrian did with his art.

At 92Y—Treasure Hunting: Lynn Yaeger in Conversation with Marion Fasel

Adventures in Emeralds With Judy Geib

Philip Crangi Goes Back To The Bench