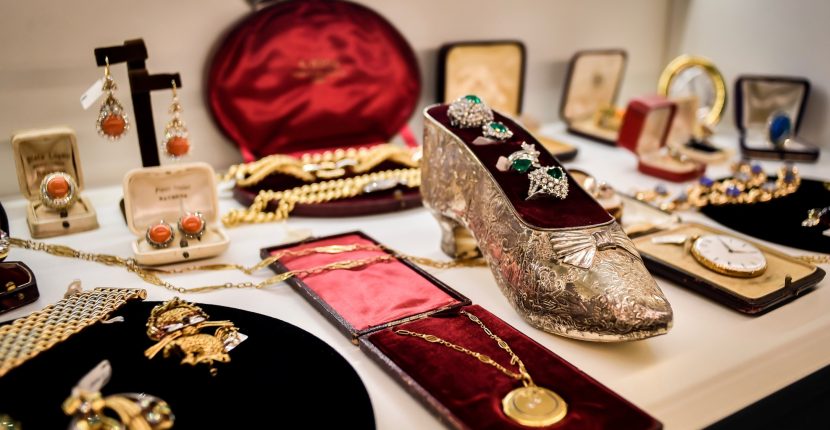 I love a trade show. But, despite my enthusiasm, I inevitably succumb to jewelry fatigue — it’s an occupational hazard. Seeing so many pieces from so many designers in such a short amount of time, it all starts to blur into one never-ending stream of sparkle. Fabulous as that may sound, it’s not ideal for appreciating the fine details. I could feel myself slipping into a gem-induced daze at the most recent edition of Vicenzaoro, the semiannual trade show that is Europe’s biggest platform for all things jewelry. With 1,500 exhibitors, there’s enough bling to send even the hardiest jewelry lover reeling. In an attempt to give my eyes a rest, I wandered out of the main hall and stumbled into VO Vintage — a new addition to Vicenzaoro featuring 30 estate jewelry and watch dealers, mainly from Italy. Let’s just say my fatigue was very quickly cured. 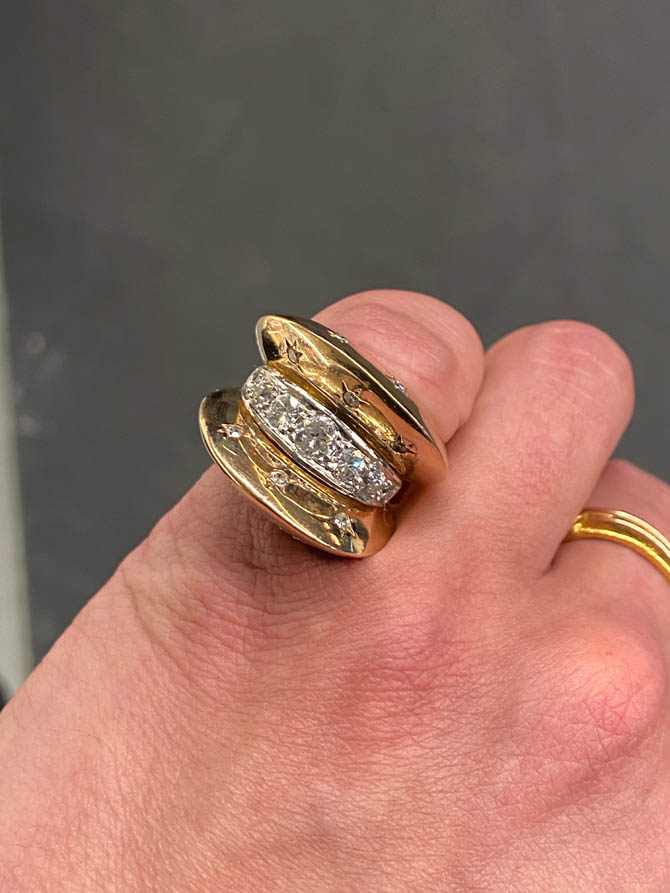 It was a small affair — understandable given that this was the first go round — but it was brimming with treasures. While the hallowed ateliers of Paris’ Place Vendôme are regularly touted as jewelry’s mecca, it’s worth remembering that Italy has a goldsmithing tradition tracing back to the 7th century B.C. Great jewels, and great craftsmanship, are as much a part of la dolce vita as mozzarella or Maserati. Just as much as Italians pride themselves on quality, they are dedicated to doing things their own way: not too fussy, not too regimented, not too quick (which explains why this story is coming to you a month after the fact). But all of that is what makes VO Vintage such a charming new addition to the trade show circuit. 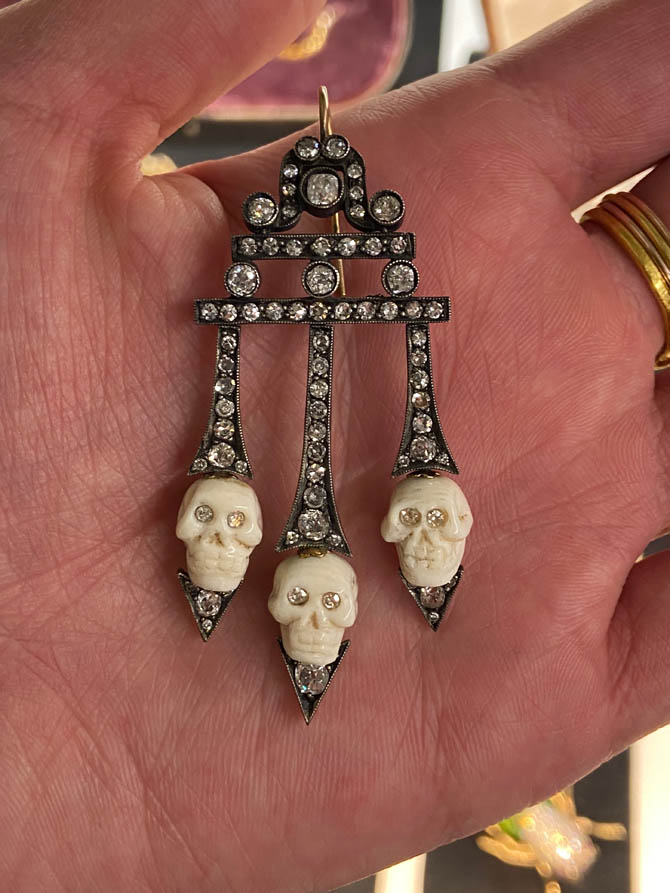 One of a pair of antique earrings in silvered 18kt gold with old-mine-cut diamonds and six carved skulls from Il Mercante. Photo Kareem Rashed

Where so much of estate jewelry in the US revolves around the house, the signature, the provenance, the stone, I got the sense that the Italians care more about beauty and craft than pedigree. I’ve been conditioned to ask “Is it signed?” but after a few quizzical responses, I quickly realized that was not the question to be asking at VO Vintage. This was a show that celebrated the joy of jewelry, pure and simple. Many of the pieces that first caught my eye had no notable name or history: a pair of girandoles suspending little carved skulls with diamond eyes, a 1940’s heart-shaped pendant studded with 8 carats of antique diamonds, a 1970’s black enamel gyspy ring crowned with citrines. While they may not be museum-worthy, these are pieces with style in spades. Their design feels totally right for right now — prime examples of how to wear estate jewelry today. 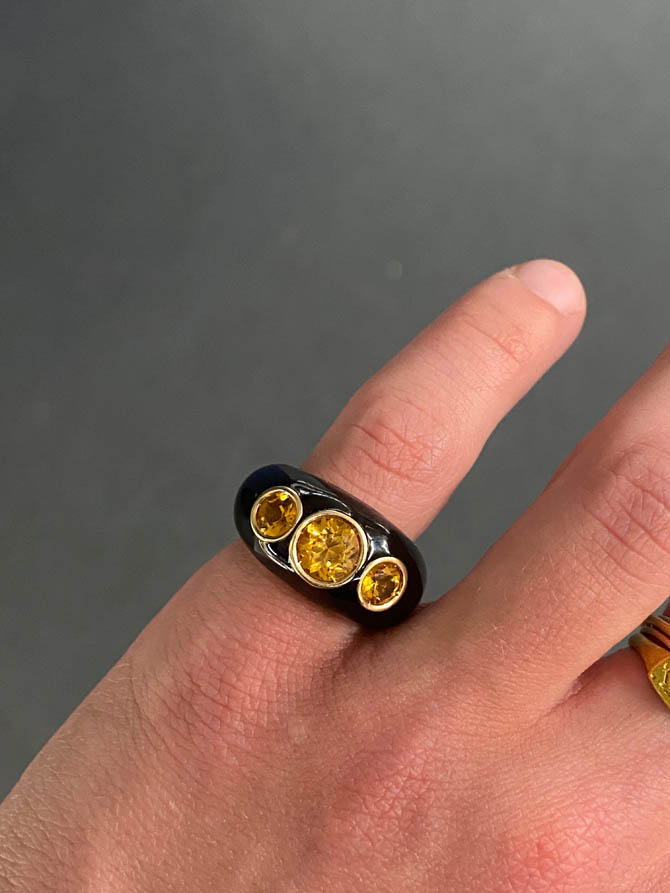 But that’s not to say there weren’t marquee pieces. One of the standout exhibitors was Vecchi Gioielli from Rome, a second generation family-run firm that’s been around some 40 years. Their booth included a 19th century pair of intricate enamel and gold bracelets from the collection of the Italian royal family. Cremona-based Barbara Bassi had an impressive selection of gold and silver compacts hand-engraved by Mario Buccellati himself. There was Bvlgari and Pomellato aplenty. But the most unique finds were the unknown, which made the pricing all the more enticing…a shopper’s delight. 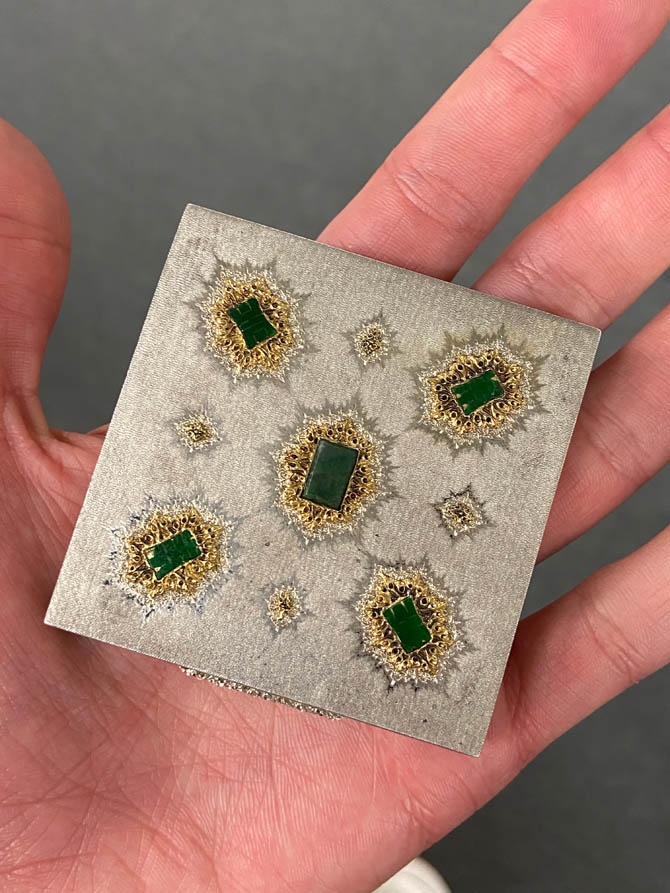 “Especially when it comes to vintage and luxury pieces, U.S. buyers continue to be the most present in the market,” says Francesco Pontillo of F&F Jewellery in Torre del Greco. “Buyers from the U.S. have always been great collectors of Italian jewels. If you think of their visits to Italy during the 19th century, they would buy micromosaics as a sort of souvenir — like modern day selfies! Now, Italians have to go to the US to find these kinds of pieces.”

Based on what I saw, though, there are still plenty of gems to be found in Il Bel Paese. With the next edition of VO Vintage slated for September, you may want to consider planning a grand tour of your own. 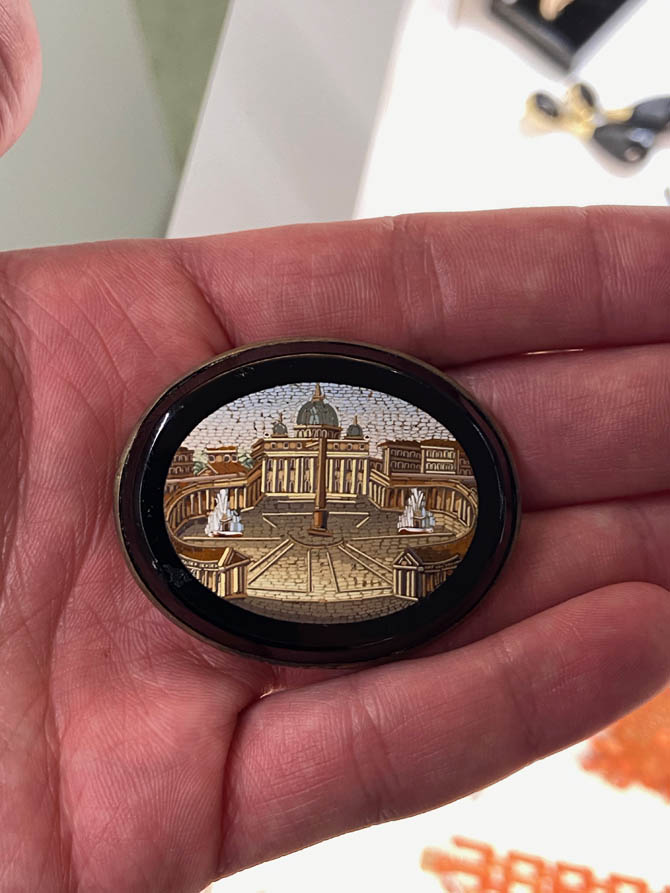 The Hot #NeckMess Owes A Lot To The Sopranos