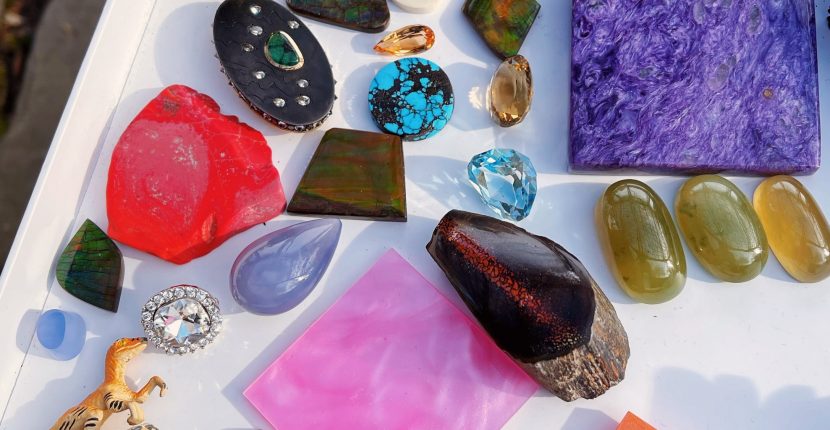 A Jewelry Rendezvous with Joseph Ramsay 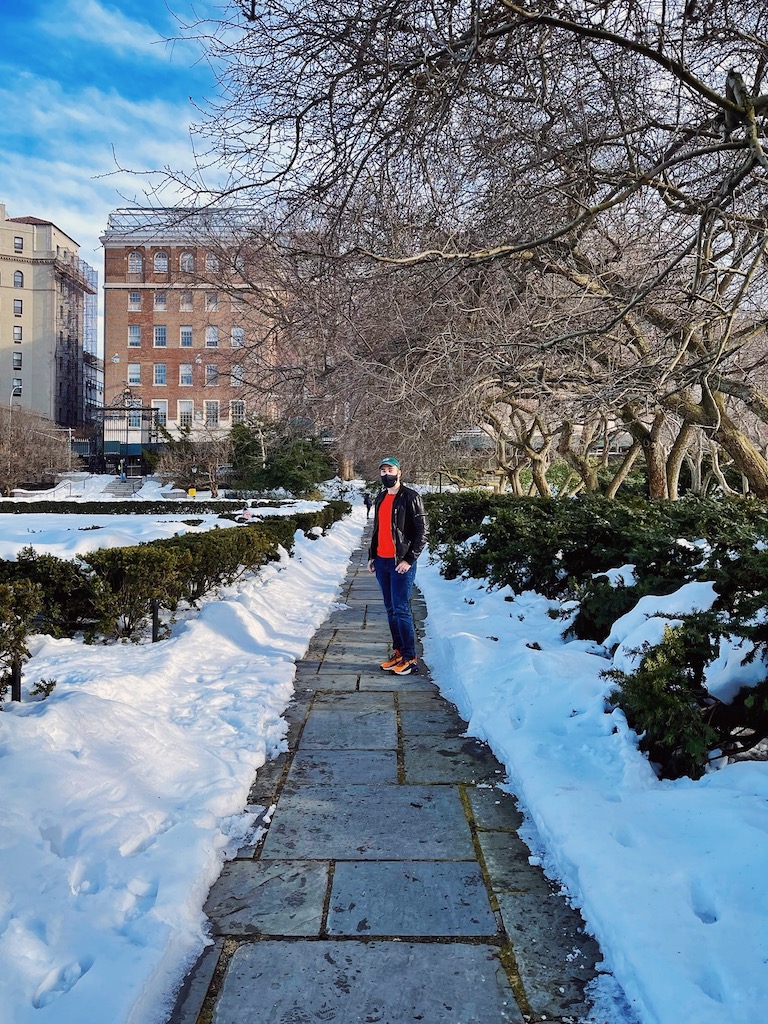 On a recent winter stroll through Central Park, I paused for a moment’s reverie at one of my favorite semi-hidden enclaves, the Conservatory Garden. It was a crisp and bitingly cold afternoon, but awash with bright February sunlight. I strolled along the geometric yew hedges, and eventually settled under the yawning mouth of the wrought iron pergola with scraggly wisteria branches intertwined throughout, surveying the Italianate garden spread below me. I sat and waited patiently, and pondered the nature of secrets within the jewelry community. Afterall, there are quite a few shadowy figures in the world of jewelry.

There are jewelers that are known famously by their initials, and only meet for interviews in diners once every decade, and there are jewelers that refuse social media and photography, hide away in hotel suites for private viewings, and refuse clients that beg to buy their jewels. And then there are jewelers like Joseph Ramsay, (on Instagram @jwramsay where he takes orders via DM) an upstart who plays by the adopted rules of secrecy, but also wants to break free, on his own terms.

The ongoing global pandemic had seen to it that no meetings could take place indoors, unmasked, so it felt especially like espionage to meet up with an extremely private jeweler outdoors on a seemingly random park bench, both of us masked and bundled up against the cold and the virus. Joseph is 24-years old, a tall and slender figure, and I could spot him striding through the garden with a bag in either hand from the moment he passed through the Vanderbilt Gate, just off Fifth Avenue. 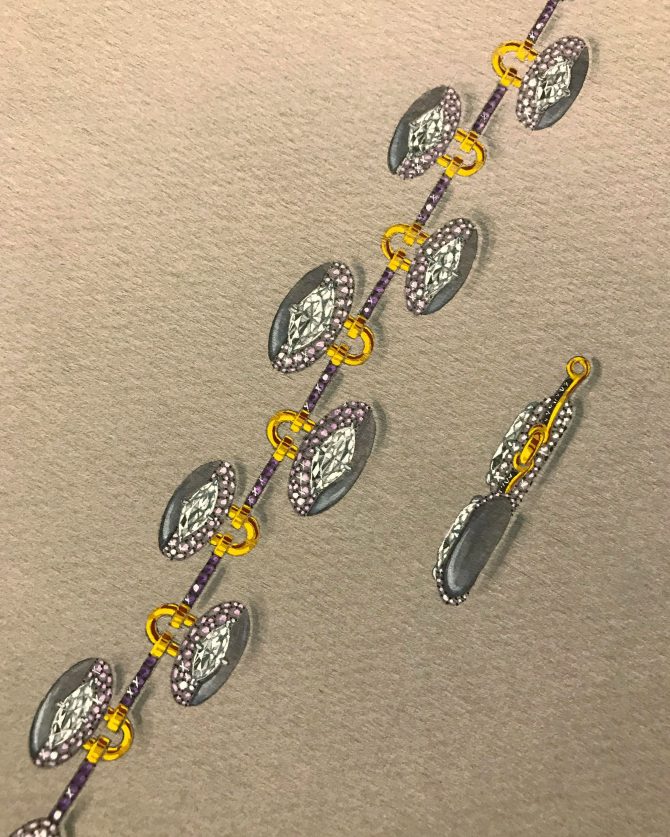 I have known Joseph for a few years and have found him to be one of the most impressive and well-versed figures in the jewelry. He is a native New Yorker, having grown up on Long Island, and attended FIT in the metalworking program. We first met during his three-year stint at Nicholas Varney, where he ultimately became creative director. Now, he’s branched off on his own, to create his own brand and mark on the industry.

You may have heard of his work before now, due to his collaboration with Sotheby’s Diamonds in 2019. His pieces were boundary pushing in that they did not follow the formula of white diamonds on black silk cord. He brought color and new materials like shiny black jet used like smokey little clouds on one’s earlobe, and paired a blue diamond with cool matte chalcedony. His padlock bracelet is my favorite piece from this collaboration, undulating around one’s wrist with purples and yellows. 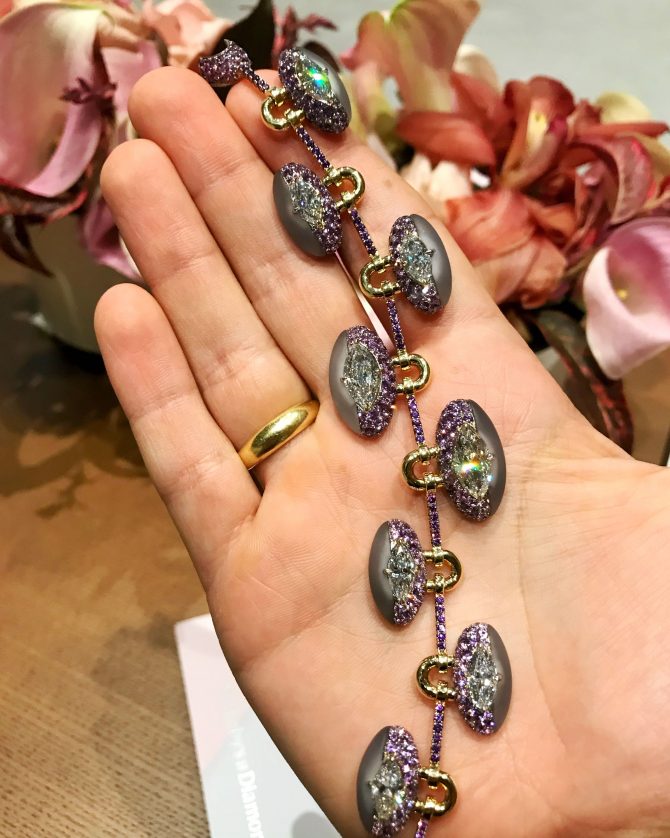 Today, Joseph sits next to me on the bench, and begins pulling out portfolios of work he’s dreamed up. The paintings of his jewels are exquisitely done, every glimmer of a gemstone or difference of material can be felt in the hand-painted gouache. There are no guardrails to his designs, some are pieces he just wanted to work through and get out onto a page, soon to be forgotten, and some are perfectly conceived, ready to be executed.

He is continuously looking at work that has come before him, and iterating on their core ideas in his own way. Any artist worth their salt should have a compendium of context stored away in their labyrinthine brain. He has created pieces that are in conversation with or communing with jewels from the past. “We didn’t grow up in a vacuum learning how to design or look at or study jewelry. All this is built upon the people that came before us.” 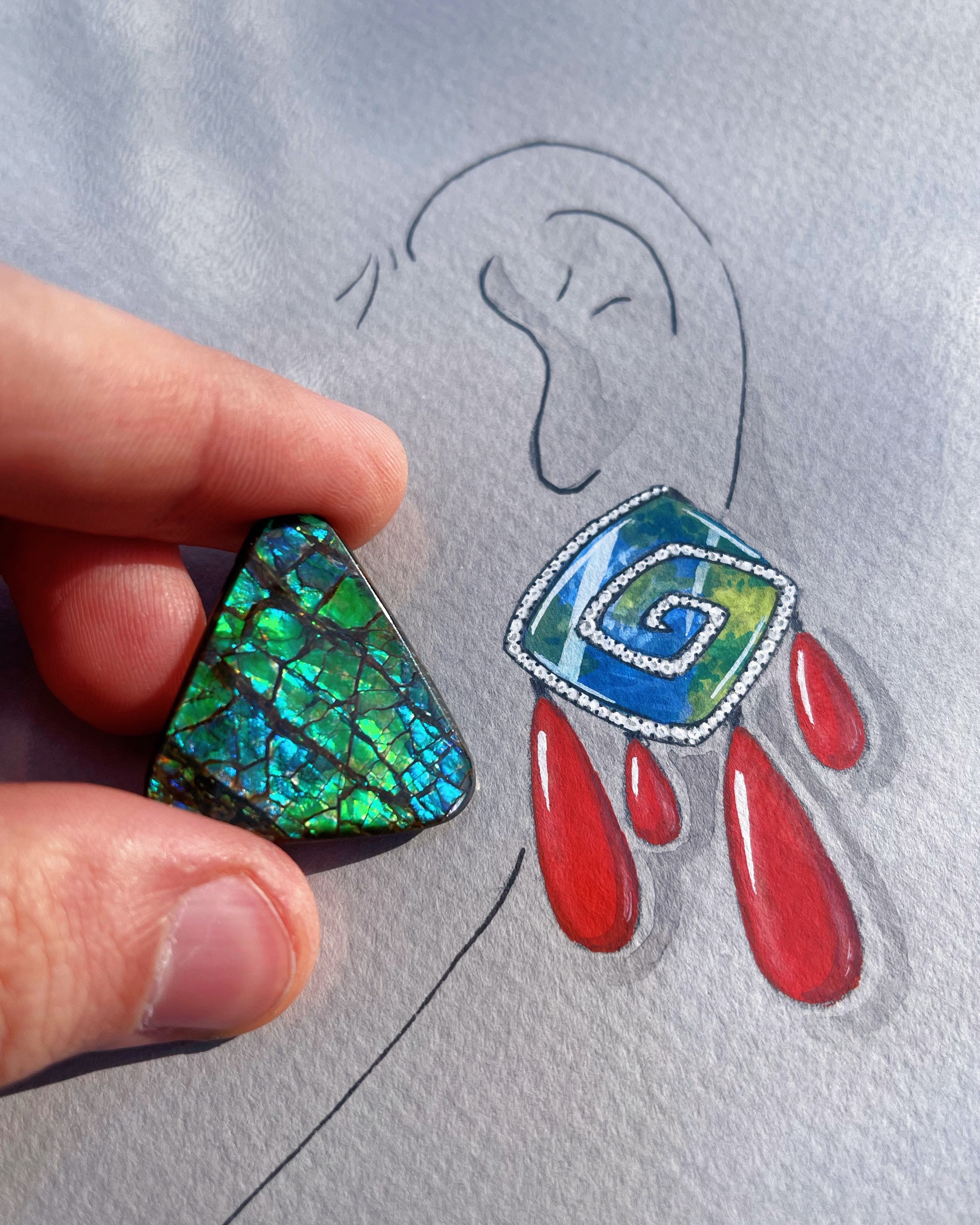 However, his other references are an endless amalgamation of anything and everything from childhood toys to the most infinitesimally precise species of bird from the deepest jungles of New Guinea. He says, “I think that level of specificity makes a better thing than me thinking in my head ‘what does a bird look like?’ and drawing a cartoon bird. When there are these things out there that are so beautiful, but have been tailor-made by nature to be either the most attractive or the most alarming.”

Poison dart frogs are a particular interest: “The way they look is bright for the sake of warning. The pattern is especially attractive to the human eye.” Joseph has a fascination with animals that put on a show, a display, or performative ritual meant to attract attention of some sort. Mating rituals, warning signals, and intricate patterns of contrasting colors are all fair game in his imagination. “Because jewelry is a performance. We’re taking these natural things and we’re hoping they’re attractive enough to bring attention, jealousy, envy, camaraderie.” 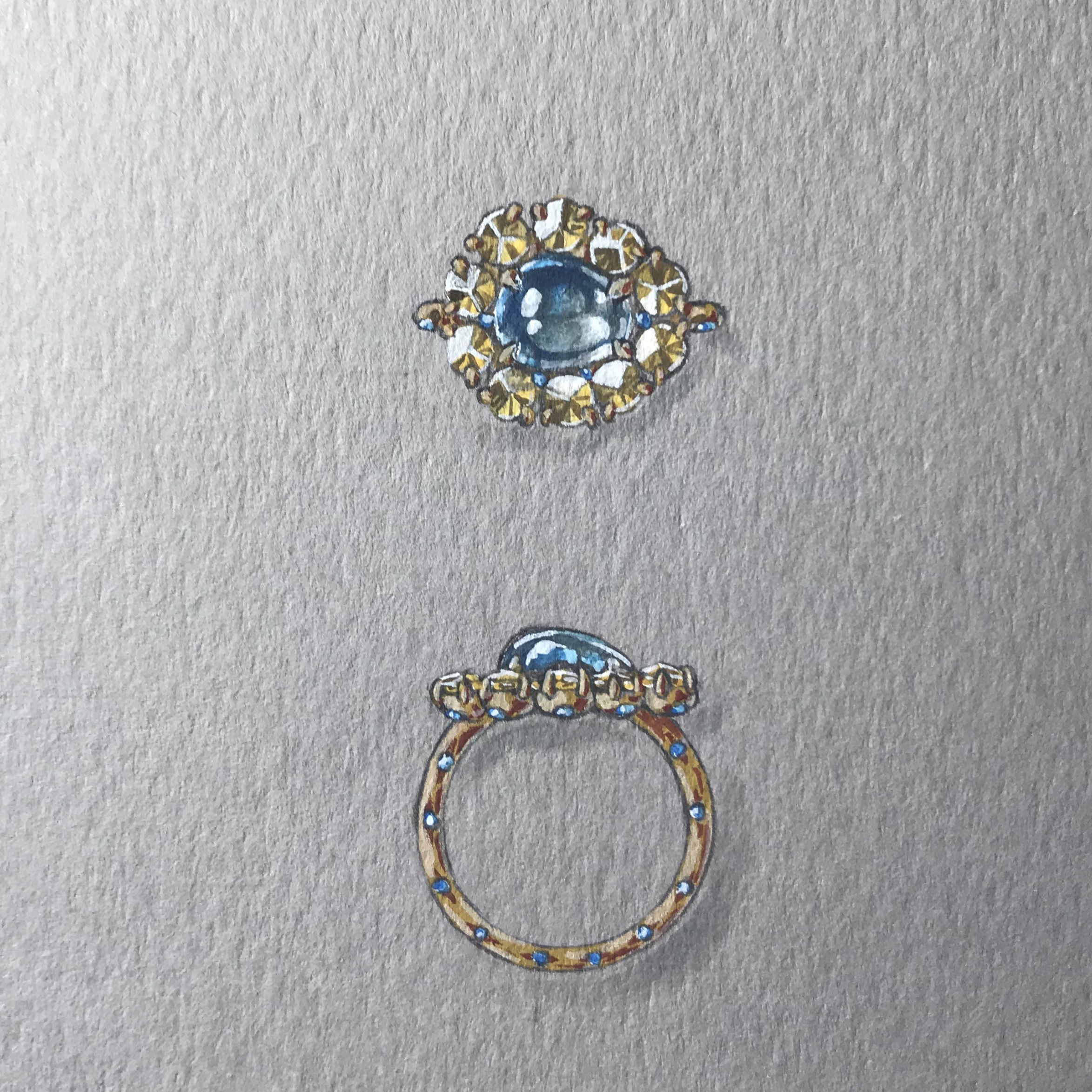 Joseph Ramsay gouache for a ring inspired by an Epimachus bird

Some of the other animal references are so abstracted, one might not even recognize them once they’ve been synthesized into a jewel. I had to be told which end was the head of the ghost pipefish he had rendered perfectly as a brooch. There were also brown sicklebill birds, ibises, cuttlefish, whip scorpions, parotia birds, and even bioluminescent nocturnal bacteria. Joseph muses, “I do a lot of dripping, creeping, fungal, bacterial pavé.”

My brain melts as I flip through the portfolios. I compliment when I can think of something constructive to say, but otherwise I stay silent, in awe. A tray appears, and it’s rustling with collected material. In 2019, I traveled to Switzerland to cover the second iteration of Gem Geneve, and I was pleasantly surprised to run into Joseph prowling the gem dealer’s booths over the course of my few days there. We bonded as we studied huge stones, cat’s eye sapphires, and other phenomenological gems beyond belief. 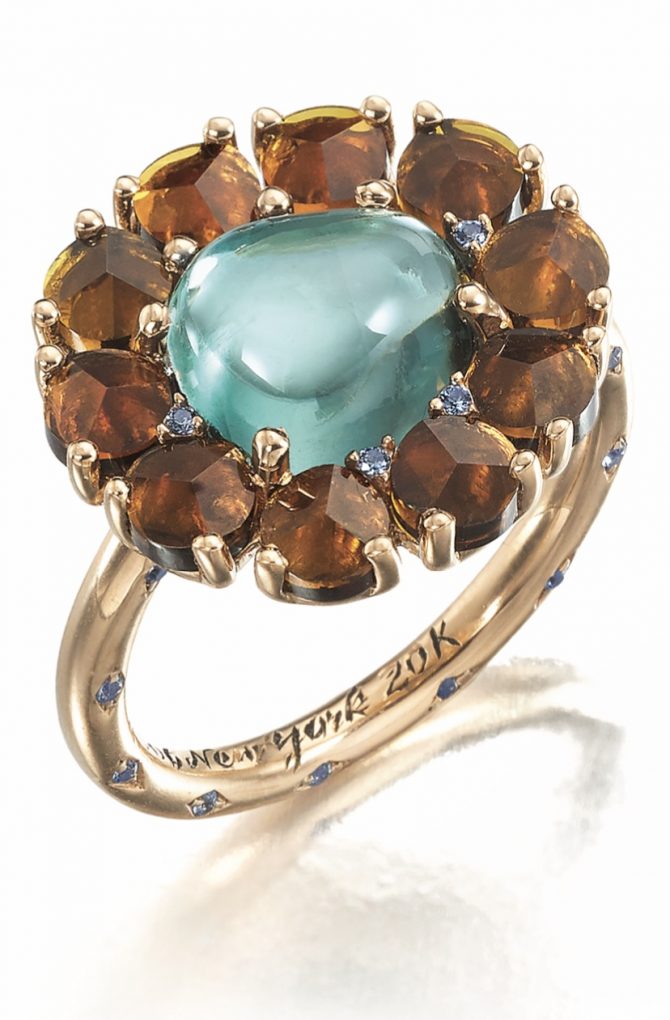 Joseph Ramsay ring inspired by an Epimachus bird. It is set with a spinel, Mali garnets and sapphires in 20K red gold. Photo courtesy

Everything Joseph has on his tray, he has a plan for. He has brown garnets from Mali with three facets on the crown, table-cut spinels, several rainbow slabs of ammolite, a button of coral, a pebble from the catacombs in Paris, a prized fluorescent pink spinel, and slag glass from the process of gold smelting that was a gorgeous flat crimson, like melted lipstick. We spoke about how old glass is in jewelry, from ancient beads to modern enamel, and he pondered, “What’s the next glass we can do something with?” He’s currently coaxing one of his jewelers to carve the material for him, and once it’s done, it will be just as desirable as any hardstone.

One gemstone that caught my eye was a watery blue topaz, cut by Jean-Noel Soni, also known as Top Notch Faceting on Instagram, and a close friend of Joseph’s. The stone is the size of a plump blueberry, but looks more like a crystal shard plucked from the famous Icelandic Diamond Beach. I can’t wait to see what concoction Joseph comes up with. 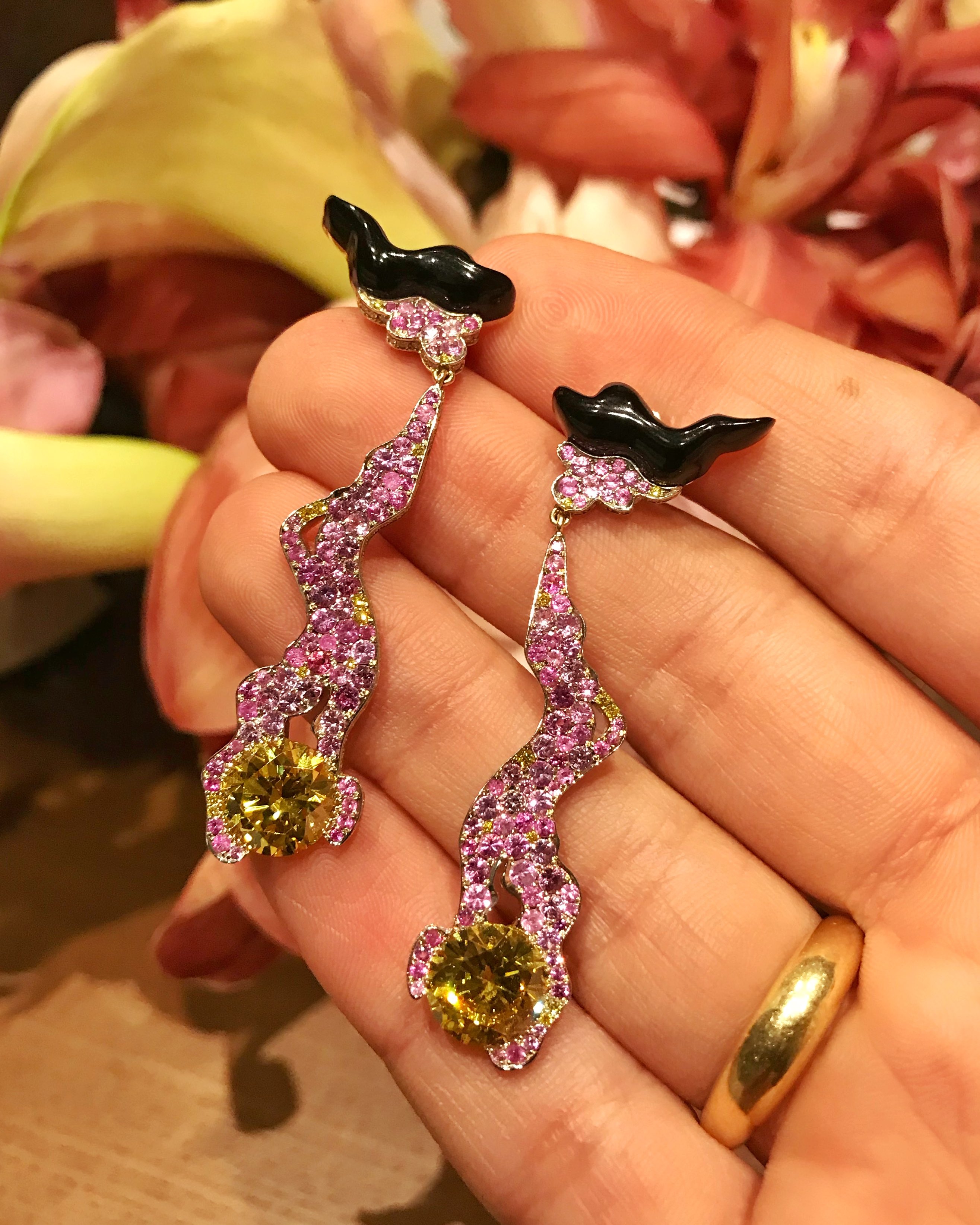 In the interest of revealing secrets, what do I want people to ultimately know about Joseph Ramsay? He’s beyond immersed in jewelry history, and he knows the context of every jewel I’ve ever shown him. That old Biblical verse of who begat who, he can do exactly that with any pair of earrings or bracelet, and its original point of reference. He detests being dismissed for his youth, patronized, and the hierarchies that can sometimes tend to withhold rather than share within this world. I would categorize him as someone who wants to innovate and subvert, all the while raising the bar of just what a jewel can be and do.

Joseph is a force to be reckoned with, and as with all rising stars, I always say the time is now to invest in someone’s work when they are at the beginning of their long career, unfurling stupendously in front of them. After looking at all Joseph had brought to share with me, we parted ways after our wintry afternoon rendezvous, and I was abuzz with excitement for what is to come for him. Now, hopefully you have discovered even more about the enigmatic and wonderful Joseph Ramsay, and I promise you won’t be able to look away.

Jewelry Gene, Jewels in the Blood Stream - Part I