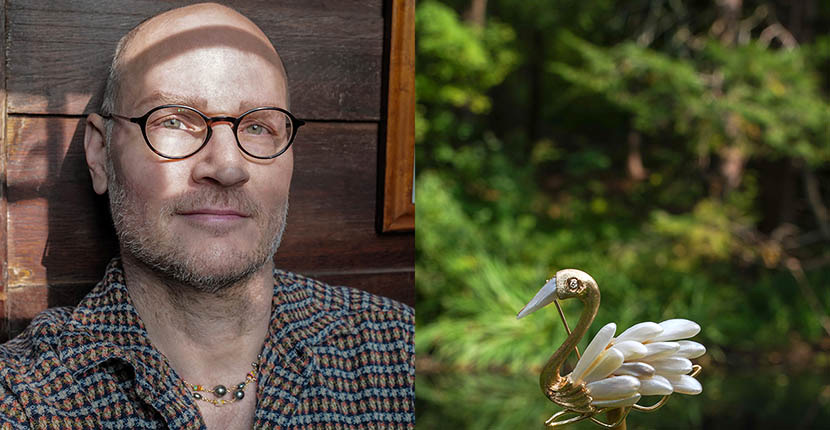 Yes, that Augusten Burroughs is a vintage dealer

I spend what sometimes seems like an inordinate amount of time—especially since Covid—on treasure hunts. Not crawling through tunnels or climbing into abandoned caves. But online, searching out arcane and curious pieces of jewelry or gemstones. I’m not necessarily looking to buy but to satisfy a craving, to be inspired, or just to spend awhile marveling at a designer’s creativity or the majesty of nature’s gems.

I’ve been working on a new novel since July and have subsequently found myself obsessed with amethyst. Knowing the stone’s meanings, I’m not surprised.

In one of my late night journeys, I stumbled on an Arts & Crafts amethyst bead necklace from The Blue Paisley Fox, on 1stDibs.com.

I marked the page and revisited the beads quite a few times over the next week. My husband had noticed and bought them for me as a surprise. After he completed the transaction, my husband wrote the dealer, thanking him complimenting him on the collection—especially the opals. He mentioned a ring on my wish list just in case the Blue Paisley Fox happened on it; an Art Nouveau peacock feather with an opal eye.

My husband got back this note.

Thanks, I’m so happy you like my collection. I’m actually an author but have been collecting jewelry since I was a child and I’m the first—and only— private collector ever approved to sell on 1stdibs. When you say you would like an Art Nouveau feather ring with an opal, do you mean an actual feather or do you mean a figurative feather?

Not surprisingly, my husband recognized the dealer’s name. After all Burroughs is a #1 bestselling memoirist, perhaps best known for Running with Scissors, which was also made into a movie.

My husband wrote back.

The one she saw was a gold feather ring with the opal as the peacock’s eye. And interestingly my wife is an author as well, though not as well-known as you are. Her name is M.J. Rose. Once I give her the beads I’ll tell her whose shop she found.

He received this response.

Bury the lead, why don’t cha! I know exactly who your wife is. As does basically every author on the planet. She took her machete and carved out the path for self-publishing and ebooks WAY before they were a thing. I know exactly the ring you’re looking for because I think I still have it. I just have to locate it and then I can send you pictures. 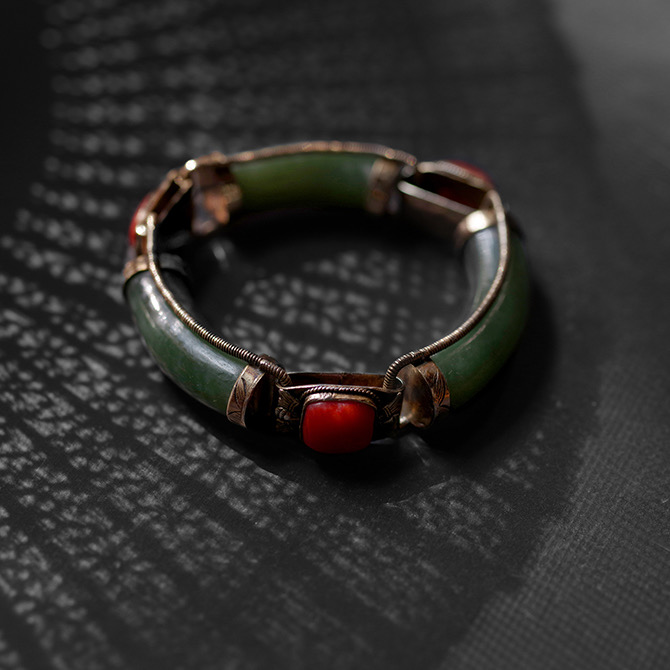 Antique Jade and Coral Link Bracelet, circa 1900 or Earlier from Blue Paisley Fox on 1stdibs. Photo by Augusten Burroughs

After my husband gave me the gift, he told me who the dealer was and showed me their email exchange. I was surprised and flattered that Augusten Burroughs knew who I was. After all he’s a rock star writer. I’d read his memoirs and admired him for years and knew quite a bit about his passion for jewelry. I just hadn’t realized he owned that online shop.

Curious about the opals my husband had noted in his emails, I returned to 1stDibs and studied Burroughs’s offerings. I hadn’t done that before. I’d simply stumbled on the beads in a search. I’ve spent a lot of time on the site over the last three years and was fascinated—Burroughs’s store wasn’t like any others I’d visited.

Of the more than 200 pieces there are almost no name brands and very few signed pieces. There is no theme I could at first discern and yet… there was something ineffable that tied everything together.

I wrote to Burroughs, told him how much I loved the beads and thanked him for the kind words about my career. In a few back and forth emails we found out had a few curious things in common. We’d both worked in advertising. And with many of the same people. We both have witches in our ancestry and have written about it; Burroughs in his memoir Toil and Trouble and me in my Daughters of La Lune novels. And we’re both jewelry obsessed with Suzanne Belperron being both his and my favorite designer of all time.

I suggested I interview him and Burroughs agreed. And it was on the phone when I asked him about the theme of his shop that I realized what we really had in common and why I was so taken by his collection.

Burroughs is a treasure hunter. 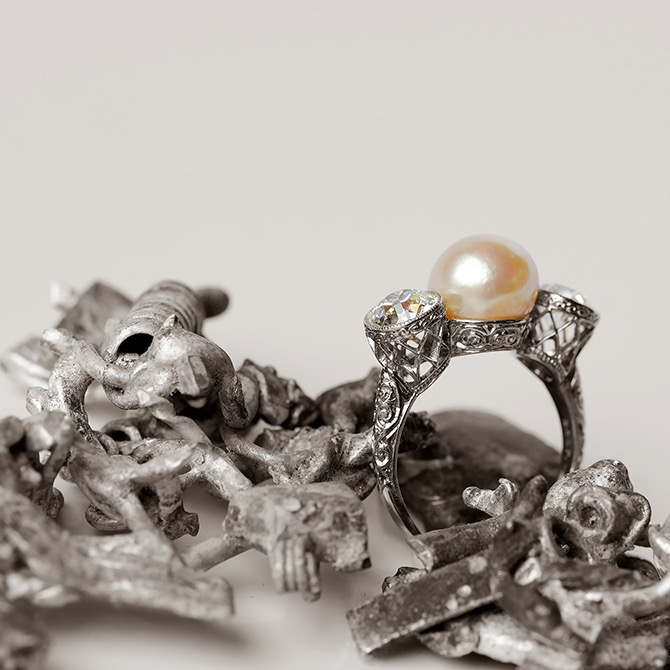 “I’m a collector because when I see something beautiful, I have to own it. And I have a store because I can’t bear the idea of these beautiful things not being worn.”

I asked him what it is that attracts him to an item.

“Sometimes there’s an irrational attraction to a particular piece that I wouldn’t ordinarily notice. My eye is drawn to it and I get the oddest sense. Usually it’s a feeling of melancholy, of missing something that I don’t know.”

Burroughs said he buys what he loves. “There’s something about the piece that is really unique or difficult to find. I tend not to buy a lot of famous pieces, but one-off creations. I’m drawn to things you have to look at twice. There’s one ring that at first glance looks like an abalone shell set in silver. Nothing that unusual. But if you look again, you’ll see it’s an abalone pearl. Most people don’t even realize abalone makes pearls and how difficult they are to find. Especially when you get it into your head you have to have one.” 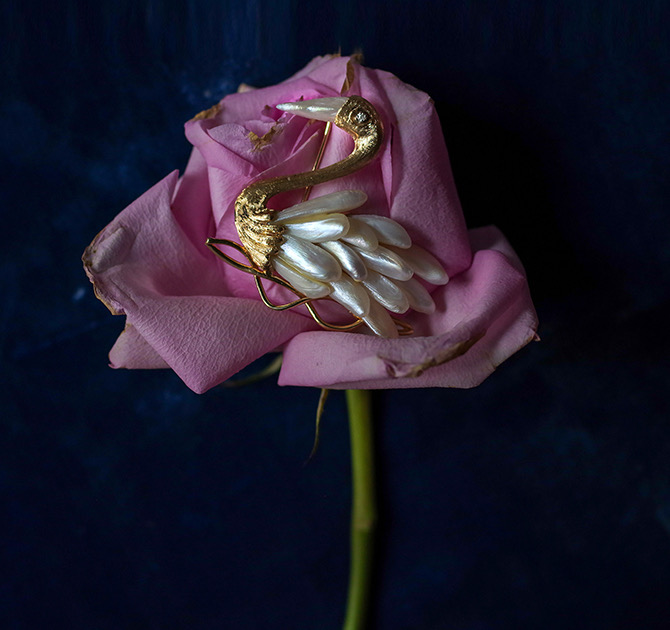 Like many collectors, Burroughs can’t stop buying but what, I asked, was the impetus to make him start selling?

“I’ve taken some extraordinarily beautiful things out of circulation. And one day, all of a sudden, it didn’t feel right. These beautiful things weren’t made for some obsessed writer to own and lock up.  So, I became a dealer on 1stDibs.com.”

“It’s definitely a passion. Sometimes I lose money on a sale. Sometimes I break even. Sometimes I make something. When you are an author you stand in a bookstore and sign books, meeting each person for only seconds. You never know them. But with the shop, I am selling to people who are like me. Something is going on in their life and they are up at 1am in the morning looking at jewelry. They write me and I get to know them. People tell me things. I love it when jewelry lands right with the perfect person. I’m totally honest with them too, which often can mean I tell a customer a piece wouldn’t be right for them. But when I do that, more often than not—they buy it anyway,” he laughs.

Of course, given his talent, the way Burroughs writes about each jewel and gem in his collection is very special. Every description is entertaining and provocative. Unlike any other store on 1stdibs.com there’s real poetry here.

Here is what Burroughs writes the antique jade and coral link bracelet in the photo above.

The jade a dense, deep sage green and feels so smooth—but not machined beneath the fingers. The human touch is sensitive enough to detect what the eye cannot: the slight irregularities of the polish. No electric tools and diamond paste was used to form these beautiful jade links: instead, a foot-powered treddle together with bamboo and garnet dust would have been deployed. It took an enormous amount of time to achieve a polish this fine. Nephrite is a very tough stone. In fact, in ancient China, chains were carved from nephrite and these used for horses to pull carts. It is the toughest gemstone.

This is what he’s penned about a natural pearl and diamond ring by Black Starr and Frost in the photo above.

Have you ever seen a thing that was so beautiful you caught yourself holding your breath? I did that the first time I saw this ring. And I suspect this is the origin of the cliché, breathtaking. When you’re confronted with something that is, in some way, in possession of a profound beauty, you can forget to breathe.

One of my favorites is in his write up of a beautiful natural wing pearl brooch in the shape of a swan.

I love “Old money” jewelry. This isn’t a flashy brooch: the diamond is tiny, there are no rubies anywhere and there’s no big Cartier logo. In fact, there’s not a single hallmark anywhere. But these fourteen pearls? They’re very special because they’re very rare and valuable. More so today even than when the piece was created. River pearls of this quality—with no signs of wear, no abrasion, no damage—are rarely encountered. 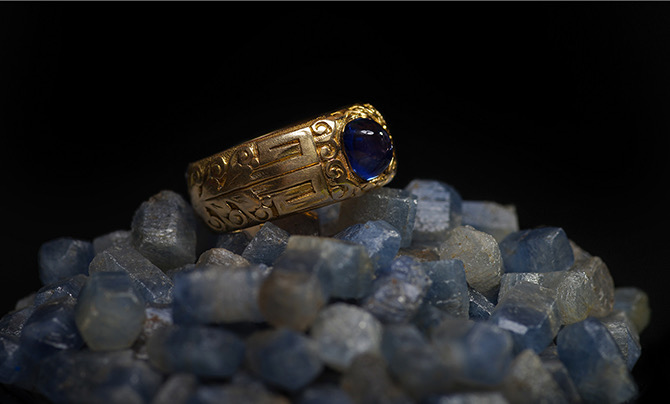 Burroughs’s advertising background hasn’t gone to waste. He knows just what to say about a piece to make it utterly irresistible and tempting. He knows when to describe a stone and when to tell a story. Like the one he told me about a Tiffany & Co 1897 Kashmir Sapphire 18K ring inscribed “M.G.D to T.G.D. Xmas ’97.

“There’s something special about Christmas in 1897. A gentleman named Dr. Philip O’Hanlon was asked by his daughter if Santa Clause was real. He suggested Virginia write to the editors of The New York Sun and ask them. ‘I am 8 years old,’ she wrote. ‘Some of my little friends say there is no Santa Claus… Please tell me the truth: is there a Santa Clause?’ The newspaper’s reply is famous. ‘Yes, Virginia, there is a Santa Clause’. Their response became the most famous editorial ever published in the English language defining the Christmas of 1897, making the spirit of Santa real for so many people. Was the Tiffany ring bought for M.G.D. after the editorial ran?” Burroughs asks.  “Maybe. It was an iconic Christmas. And this is an iconic ring.”

I asked Burroughs about the name of his store.

“I felt that The Blue Paisley Fox was a good visual metaphor for the kind of jewelry I am most interested in: the cunningly elusive jewel you feel like you may never find… that seemingly impossible-to-find treasure,” he said.

And it is the perfect name because spending time at The Blue Paisley Fox, is to go on a treasure hunt with a delightful guide who is always searching for one thing — and that’s the theme of his store — beauty.  And even if you’re just e-window shopping, you’ll be the beneficiary of that, enjoy yourself enormously and probably learn something about a rare and unusual gem in the process.