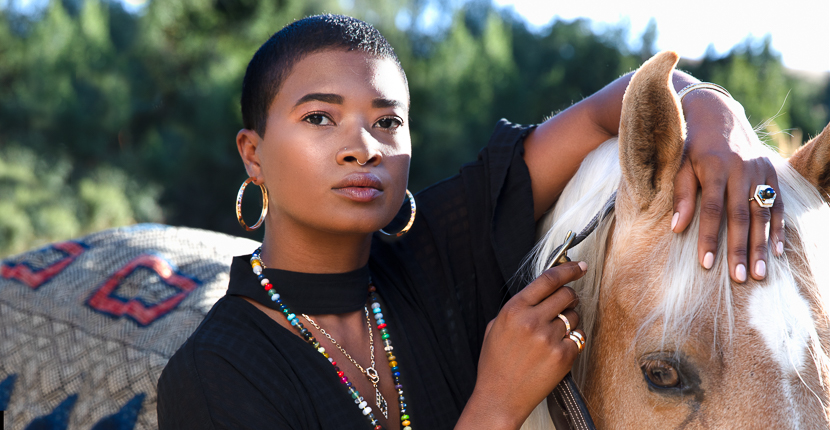 Get to Know Harwell Godfrey

I enjoy scrolling through a lot of jewelry on Instagram, seeing what designers are up to and spotting new collections. My scrolling stops and screen grabbing commences when a designer debuts something dazzling or begins to tell their story in a new personal way. In the last couple of months Harwell Godfrey has become one of my favorite accounts of emerging talents.

My new obsession with the two-year-old label began when the designer, Lauren Harwell Godfrey, introduced her stunning Valley of the Moon Collection on March 1. Her starting point for the pieces were the silhouette of 19th century crescent pendants. Lauren totally reinterpreted the look in two tone mother-of-pearl inlay accented with diamonds.

She explained in the Insta post that the moons were “inspired by my son Miles who was born right after the super moon in November 2016, and our home in Sonoma, which is also referred to as “Valley of the Moon” after a Jack London novel that was set there.” 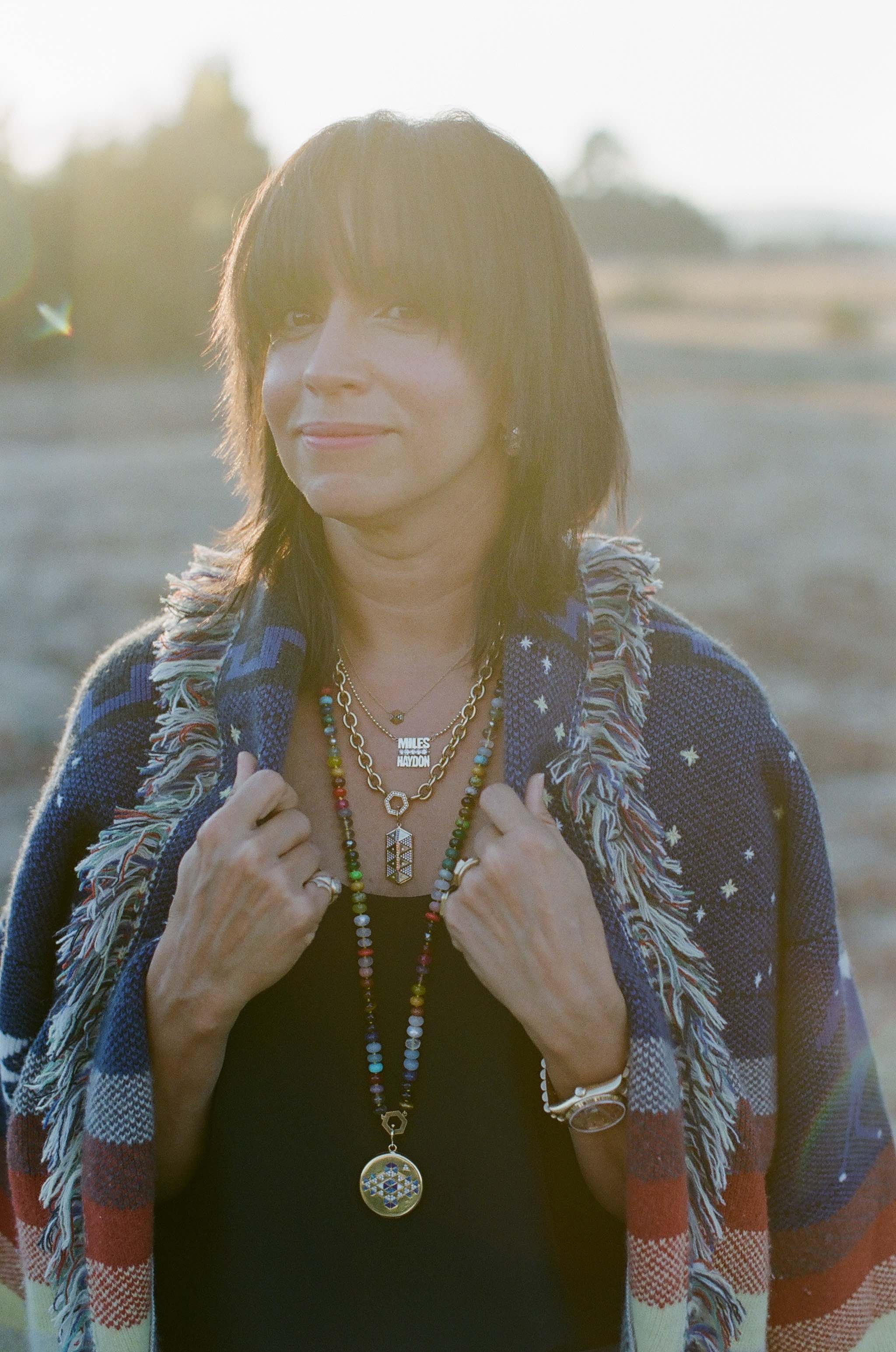 When Covid-19 began to hit crisis levels in America around mid-March, Lauren continued to hold my attention as she generously and creatively supported various causes. On March 15, she announced a portion of proceeds from her sales were going to No Kid Hungry. On April 1 she gave away a pair of gold, diamond and lapis studs to a “health care hero” in honor of her mother who was a nurse. Near the end of April, Lauren, who worked in the culinary arts for a period, posted a stunning design of a malachite, gold and diamond heart pendant and announced that proceeds would benefit World Central Kitchen (WCK) the non-profit organization started by chef José Andrés that is reliably situated at the front lines of disaster relief efforts around the world.

All of this activity, in a time when it required some serious creativity to generate relevant jewelry news, put Harwell Godfrey on my short list of emerging talent to watch. When I told the 45-year old designer how I had been loving her Instagram, she said the selfies she puts on it every once in a while are there because it is part of her “wish and mission to be a role model for black jewelry designers.” She realized when she started in the field there was so little representation, she wanted to show how it is possible to be a part of the fine jewelry world.

Lauren shared more of her story with me during our phone conversation. Read a condensed and edited version of our talk below. 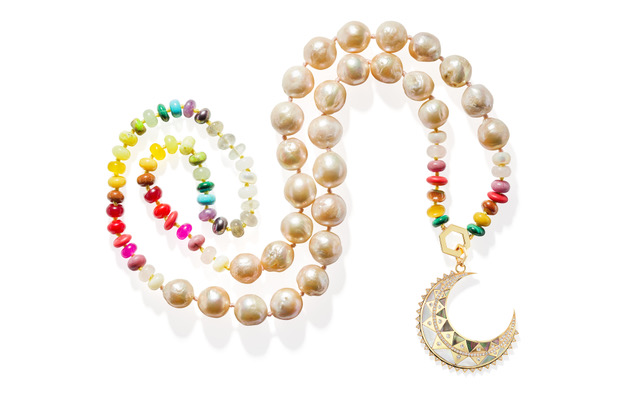 It was an almost accidental business. After a hitting a creative wall in advertising, I went to culinary school and thought I would be a food stylist and even had a blog about food. During that time, I started making funky leather and crystal jewels to wear. I pretty quickly realized jewelry was my passion and the right creative outlet for me. At that point I talked to my friend Randi Molofsky and her business partner Meghan Flynn Petropoulos at For Future Reference. They helped me to develop the brand and learn the ropes of the fine jewelry world.

A lot of the beautiful details in your work are inspired by ancient textiles and ethnic patterns. Tell me a little bit about that.

From my background in advertising, I knew it was important to have a brand voice and identity people would recognize immediately. When I started working on the jewelry collection, I thought what can I bring to the table and what is different?

I collect textiles. Many are from Africa and feature geometric shapes. As a woman of color, I wanted to highlight this work in my own way. I thought it would translate well and be a unique pattern applied to jewelry. I think the moon is a fun example, because you wouldn’t think of that motif as having a geometric pattern. It’s unexpected and interesting. 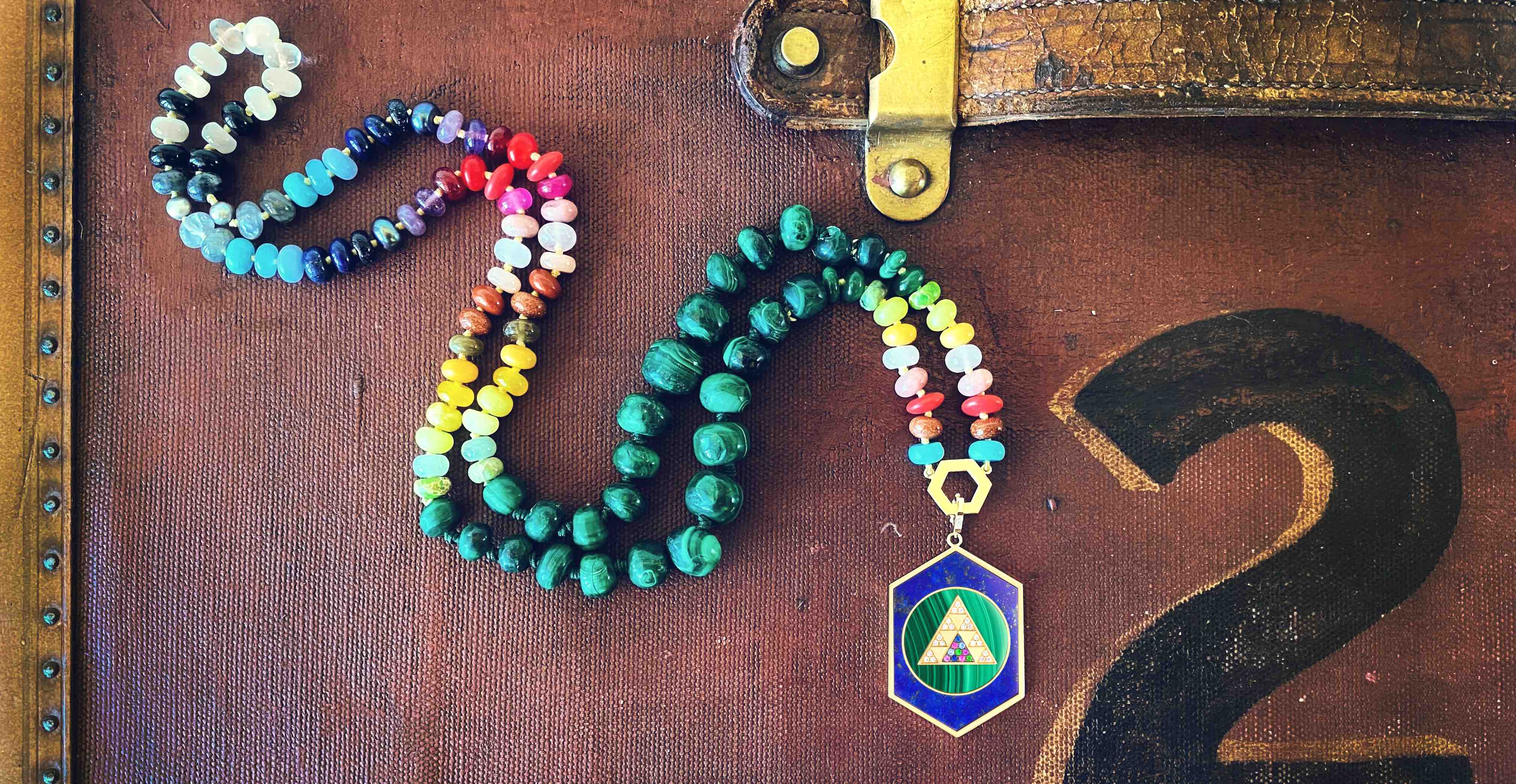 Harwell Godfrey Hexed Pyramid Medallion on a Rainbow Necklace with malachite among other gems. Photo courtesy

Another detail that I adore about your collection is the bold scale.

From the beginning, the pieces were always big. I am actually producing some that will be smaller in scale, but the original large scale probably comes from the fact that as a former art director, I worked on a lot of photo shoots and always liked bold shapes and colors. It translates well into the jewelry.

The idea of gems being healing is certainly a hot topic right now and something that is key in your collection. What is your take on the subject?

Energy is important to me and I do believe things from the earth have powers. A lot of the stones have great positive energy from their colors. I also think it is fascinating that we have ascribed emotions to stones historically—many are forms of protection.

Malachite is considered a guardian stone for travelers. Turquoise is a healing stone. Diamonds are amplifiers of the stones around them. I like to double up on the positivity by setting gems in a triangle which represents positive forward motion

I adore your Rainbow Bead Foundation necklace. It’s so eye-catching and beautiful.

I got the idea for that when Randi from For Future Reference was wearing a necklace of African trade beads with lots of color. Each of the strands for the Rainbow Beads are one-of-a-kind because, I do them individually. I think there is something special about that. You can’t predict the pattern you are going to get. It is uniquely yours. 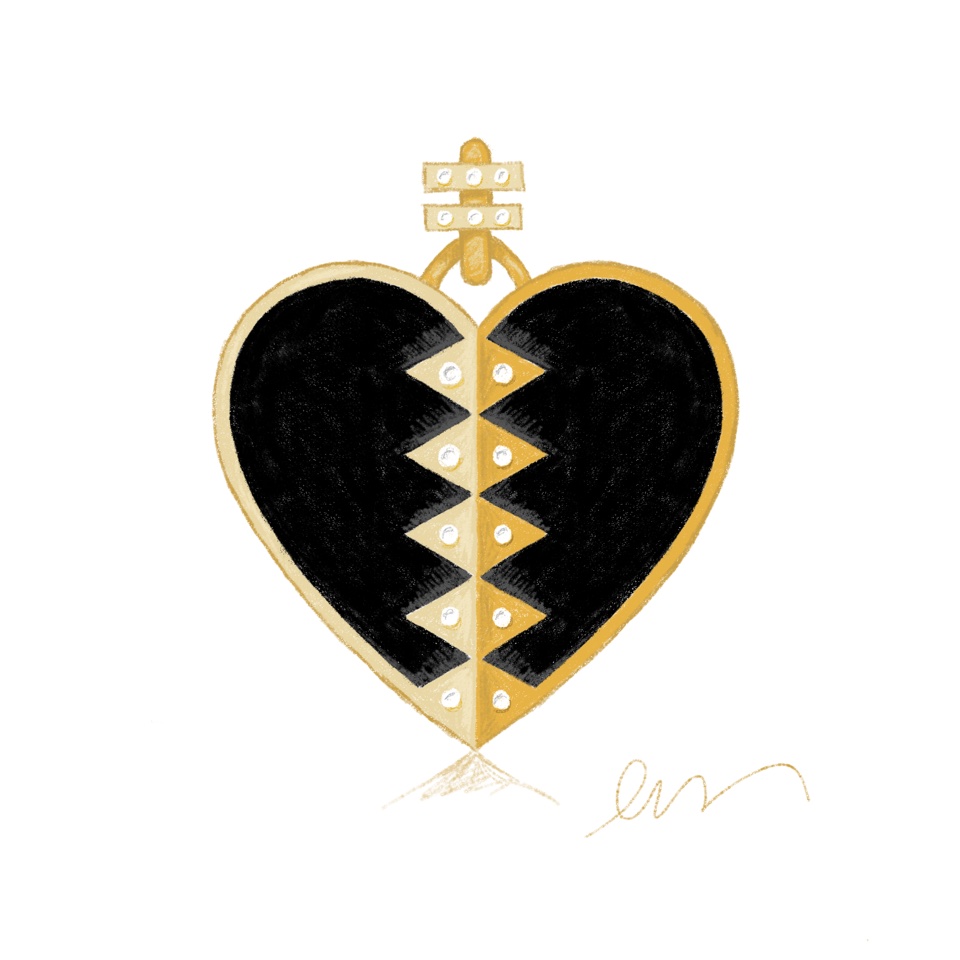 I have always loved malachite, but you don’t see it too often in contemporary designs. You have almost made it a signature stone in your collection. What attracted you to the gem?

Now, you have added another heart to the series with 100% of the proceeds benefiting the NAACP. Could you elaborate on the design and details?

When George Floyd and Ahmaud Arbery died and all these terrible things were happening, I wanted to do something to help. I thought the heart design I originally conceived for World Central Kitchen, was saying all the right things. When I put my signature triangles down the center, I realized it made the heart look like a broken heart that had been put back together. The bail has the two bars symbolizing equality. I switched the stone to black onyx, honoring black lives. Black onyx is also a stone of protection strength. The back is engraved “We are one” because I believe in people coming together and supporting each. 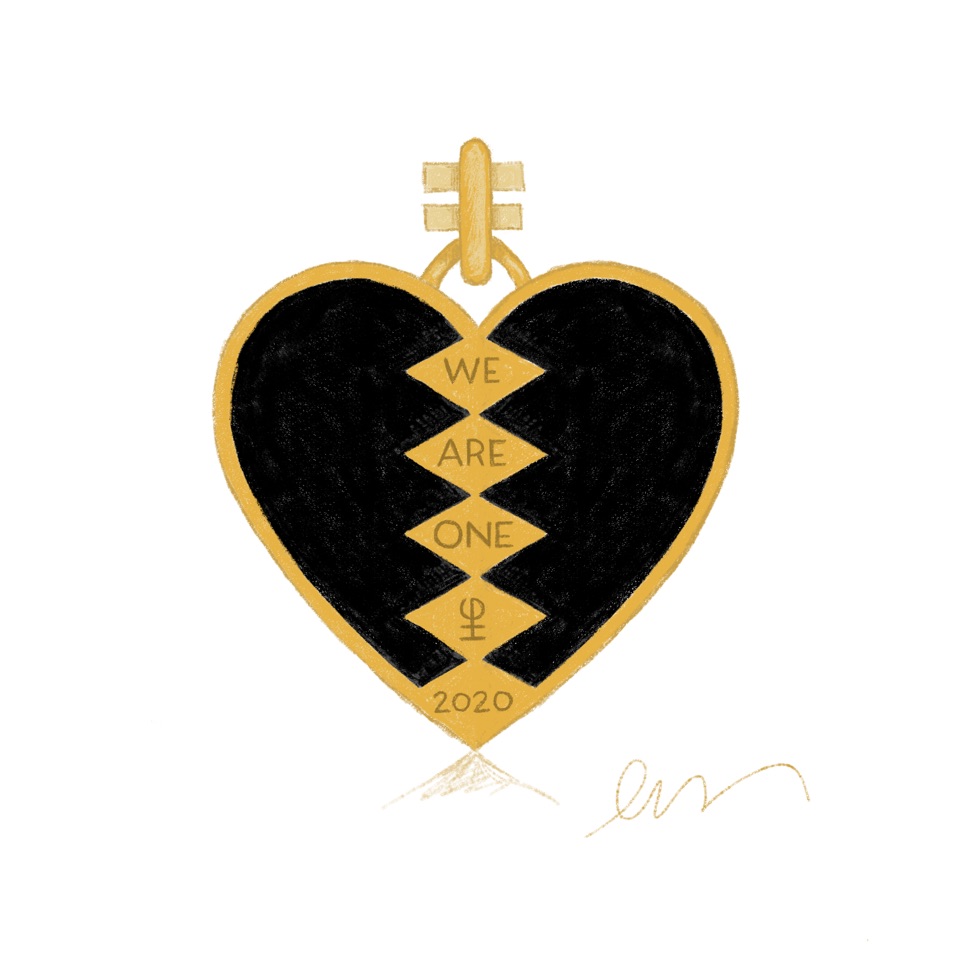 A rendering of the back of Harwell Godfrey’s Black Onyx Heart pendant to benefit NAACP. Photo courtesy

The Jewelry Trends at the NAACP Image Awards