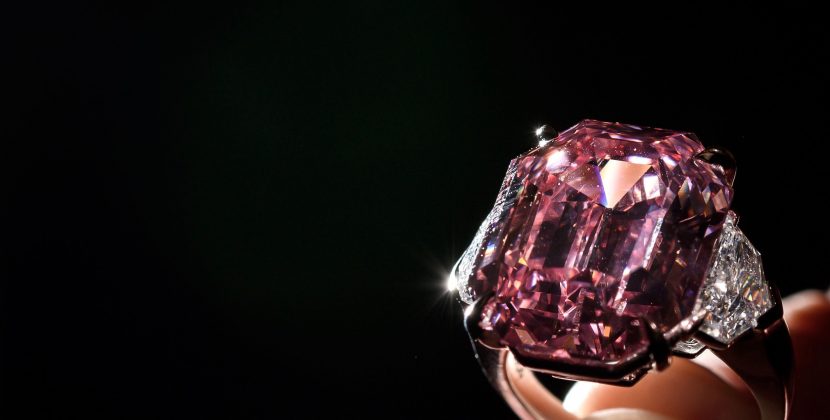 The 18.96-carat Winston Pink Legacy diamond set in a diamond and platinum ring that was purchased at Christie's in Geneva for $50-million. Photo Getty

The jeweler paid a record $50-million for the sensational stone

The Pink Legacy, the marquee gem in Christie’s Magnificent Jewels auction on November 13, 2018, was bought by Harry Winston. The New York based jeweler owned by the Swatch Group set a world record price for the 18.96-carat fancy vivid pink gem, purchasing it for 50,375,000 Swiss Francs, about the equivalent to $50-million. Immediately after the sale, Harry Winston’s CEO Nayla Hayek, daughter of the late Swatch founder Nicolas Hayek, renamed the stone The Winston Pink Legacy.

The extraordinary gem once owned by the Oppenheimers, the family behind the DeBeers diamond company, inspired gem specialists to all kinds of superlatives. Shortly after the sale the legendary auctioneer and chairman of the Christie’s luxury group, François Curiel, told reporters, “This stone for me is the Leonardo Da Vinci of diamonds, I don’t think there is anything better.” Rahul Kadakia, Christie’s International Head of Jewelry who conducted the sale in Geneva said, “The saturation, the intensity of this stone is as good as it gets in a colored diamond.” 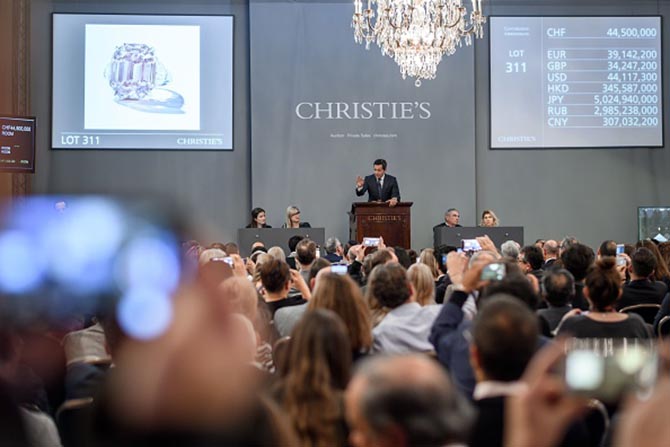 Gemologically speaking, the Fancy Vivid Pink color, VS1 clarity, type IIa Harry Winston Pink Legacy is special for a few main reasons. Most gems of the same color quality are only around 1-carat. The color in the Legacy shows no signs of a secondary color such as purple, orange, brown or grey. The even distribution of color and balanced saturation put it into the rarefied Fancy Vivid grading category from the Gemological Institute of America (GIA). Tom Moses, Executive Vice President GIA, described the pink as “the rarest of all gemstones.” According to Christie’s, “In the salesroom, Fancy Vivid Pink diamonds over 10 carats are virtually unheard of —in over 250 years of auction history at Christie’s, only four such stones have ever appeared for sale.”

Since the Swatch Group acquired Harry Winston in 2013, it has been on something of a buying spree for incredible gems that would have made the founder of the firm proud. In 2017, Winston bought the 18.04-carat Rockefeller Emerald at Christie’s in New York for the world record price of $5.5-million. In 2013, Winston set a world auction record for a colorless diamond sold at auction when it purchased a pear-shaped, D color, flawless diamond of 101.73 carats for more than $26.7 million. The gem is now known as the Winston’s Legacy. 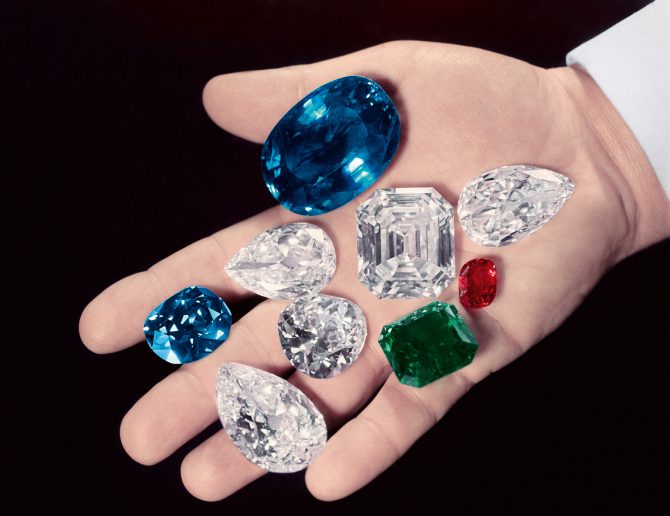 Mr. Harry Winston holding some of his famous gems for a 1952 article in Life magazine. The gems in his hand include, the Sapphire of Catherine the Great (next to thumb), the Hope Diamond (between index & middle), the Royal Spanish Emerald (green), the Idol’s Eye (left of emerald), the Jonker Diamond (C, square cut), the Star of the East diamond (tear shaped, bottom), a large ruby and a pair of 50-carat matched pear shaped diamonds. Photo Bernard Hoffman/The LIFE Picture Collection/Getty Images

The incredible gems Mr. Harry Winston assembled around 1952 were collectively known as The Court of Jewels. He toured the gems throughout the United States, Europe and Cuba for ten years. The exhibit was almost always booked for benefits and civic functions. Some of the pieces were sold to people as famous as the gems themselves for example the Duke of Windsor picked up the 31.26-carat Mclean diamond for the Duchess of Windsor. Other diamonds including the Hope were eventually donated to the Smithsonian in Washington, D.C. While the new owners of Harry Winston have yet to reveal what their plans are for all these stones, I somehow suspect putting them on exhibit for all to enjoy might part of the way they continue to honor Mr. Winston’s legacy.