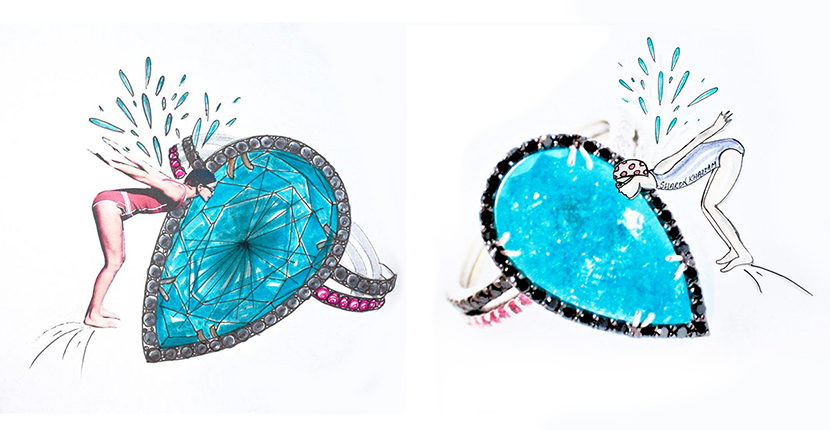 In a break-the-feed kind of Instagram post, designer Sharon Khazzam showed her love of Paraíba tourmalines.  The classically trained designer, who painstakingly draws each of her jewels, created a whimsical rendering of herself diving into a photograph of one of her rings set with a large pear-shape Paraíba tourmaline (above right).  The designer who also happens to be a triathlete followed the post with the concept in reverse.  It had a shrunken down photograph of Sharon diving into her drawing of the same Paraíba tourmaline ring (above left).  “I wanted to express the way I feel when I look at Paraíbas” explains Sharon.  “I dive into the color.” 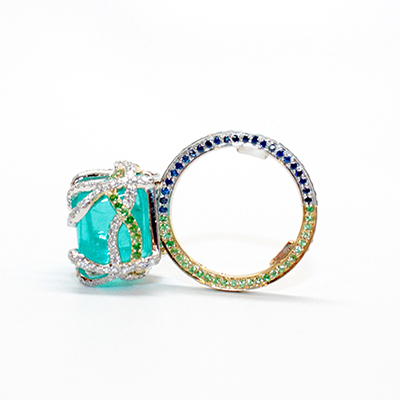 A modern gem phenomenon, Paraíba tourmalines were discovered in 1989 in a northeastern state of Brazil named Paraíba.  The gem comes in a range of colors from greenish blues to violet hues depending on the amount of copper or manganese in the stone.  The most coveted blue is often compared to the color of Windex.  In simple gemological terms the electric neon effect is the result of how light hits the inclusions.  Some Paraíbas have so much copper, the almost pure metal inclusions are highlighted on the interior, resulting in a high voltage glow.  “It’s the most delicious stone,” says Sharon. “The color plus brilliance equals fabulous.”

Sharon, who debuted her collection at Barneys in 2001, is known for her jewels with a kaleidoscopic mix of gems.  A close look at the inventory of stones in her designs often reveals little Paraíbas.  The designer has also made the gem the center stone of showpieces. 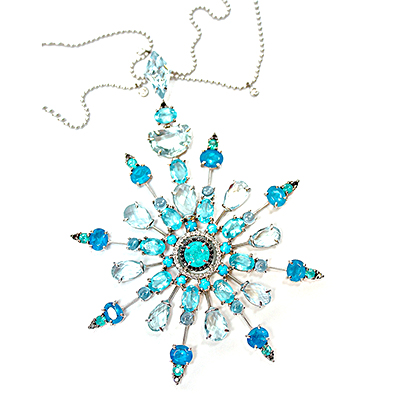 The Paraíba Cube Ring is one of Sharon’s most jaw dropping jewels.  “The gem cutters thought the stone was too perfect to facet,” explains Sharon. “Because it’s such a delicate stone, I wrapped it in diamonds and white gold.  I wanted to at once show it and protect it with elegant armor.”  Sharon highlighted the glamorous encasement with blue sapphires and tsavorites that extend down and wrap around the band of the ring.

Sharon’s multicolored Blue Snowflake Veronica Pendant evokes the magic of winter as well as the shimmering turquoise-domed cities and mosaics of the Silk Road.  The center Paraíba is surrounded by rays of blue-hued gemstones—apatite, turquoise, aquamarine, topaz—that resemble drops of frozen water falling from the sky. 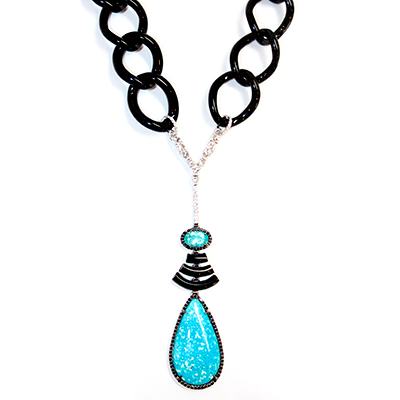 The majority of the Paraíbas Sharon has worked with over the years came from the mine in Brazil but the gem source is nearly depleted.  A few Paraíbas in her collection now come from the mine in Mozambique.  The Africa Paraíbas have the same chemical composition as the Brazil stones.  While Sharon says the first wave of material she saw from Mozambique was not the color quality she had enjoyed from Brazil as they dug deeper in the mine the output has begun to look closer to the same high quality.

No matter the source, great Paraíba tourmalines command high prices due to their scarcity and growing demand.  Prices of the finest stones, between 3 to 5-carats in size, can reach over $10,000 per carat.  Sharon estimates the prices have gone up between 15% to 20% in recent years.  Yet she continues to use them in her jewels regularly.

“Sharon is someone who takes chances,” says senior style editor at the Robb Report Jill Newman who travels the world to visit the best bespoke jewelry designers. “I know few other designers who would be bold enough to pair something that is as bright as Paraíba with other stones.”

The chic editor took a chance on Sharon when she decided to revamp her traditional engagement ring.  Sharon encircled the center white diamond with a mélange of cabochon Paraíbas.  “I am always stopped by people who notice it and say, ‘that ring is fabulous,’” says Jill.  That kind of recognition is the real life equivalent of breaking an Instagram feed.

Adventures in Emeralds with Judy Geib