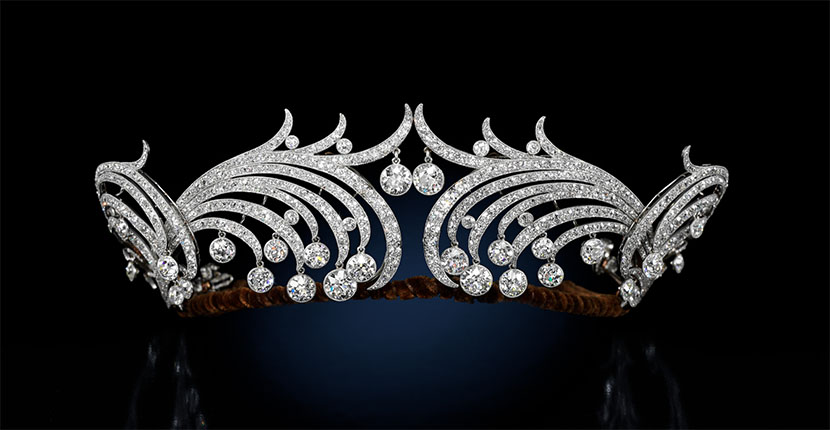 A platinum and diamond Cartier tiara made in 1904 and featured in Sotheby’s exhibition of royal and aristocratic tiaras staged in celebration of Queen Elizabeth II's Jubilee. Photo Sotheby's

June 1, 2022—The centerpiece of Queen Elizabeth II’s Platinum Jubilee Season, celebrating her 70 years as monarch, takes place this long holiday weekend in London. Trooping the Color, an official event honoring the Queen’s birthday with a parade to Buckingham Palace followed by the Royal Family’s appearance on the balcony, is the main activity among the festivities.

So why, you might be wondering, is Elizabeth’s 70th anniversary as queen called the Platinum Jubilee?

The short answer is because platinum is the rarest metal and it is a rare achievement. In fact, it is unprecedented. Elizabeth II has held the title of monarch longer than any other king or queen of Great Britain. In second place is Queen Elizabeth’s great-great grandmother Queen Victoria who reigned for 64-years.

The tradition of platinum symbolizing a 70th anniversary is believed to have begun during the 19th century. On the scale of gems and metals that mark anniversaries platinum ranks above silver (obviously) as well as gold, rubies and diamonds.

The earliest examples of platinum in the decorative arts have been found in the tombs of ancient Egyptians as well as the Incas.

Around 1590 Spanish explorers called the platinum they discovered “platina” which translates as “little silver.” Clearly, they didn’t quite know what they had found. A Swedish scientist named H.T. Scheffer corrected the situation in 1751. He proclaimed the metal was precious.

King Louis XIV jumps into the platinum story during the 1780s. The luxury-loving French monarch declared platinum was the “only metal fit for kings” after his jeweler, a talented goldsmith named Marc-Etienne Janety, created some platinum jewels and objects for him.

The only surviving item from the Sun King’s platinum collection is a sugar bowl made in 1786, which is on display at the Metropolitan Museum of Art in New York. According to the Met’s description, “Janety appears to have been the first European silversmith to work in platinum, newly available to silversmiths in the 1780s. It had recently been discovered that arsenic lowered the melting point of platinum, allowing it to be cast and then worked.”

In spite of the fact that Janety figured out how to work with platinum, it alluded other jewelers for generations. And the history continued to move along at a snail’s pace for two main reasons.

The first is platinum’s rarity. Platinum is about 30 times rarer than gold making it the rarest metal on earth. A frequently referenced scientific analogy says, if you took all the platinum in the world, melted it and filled it into an Olympic size swimming pool it would only come up to your ankles.

At the turn of the century platinum finally fully entered into jewelry. It happened because platinum deposits were discovered and the metal became more readily available. Simultaneously, a torch was developed that made it easier for jewelers to work with platinum. In no time platinum became the only metal used for important pieces of jewelry.

Platinum’s unique properties got the kinks out of jewelry. Unlike silver, which had been the primary mounting for diamonds until platinum came along, it does not oxidize and turn black. Consequently, it did not need gold backing to protect the skin from tarnish as silver once did.

Platinum is a hypoallergenic metal because the alloy is very pure. There is usually at least 90% platinum in a platinum jewel and it’s only mixed with metals that are in the platinum group of metals.

Platinum’s color, which has been variously described as silvery white or grayish white, creates an amazing mounting for gems. Diamonds shine their brightest in platinum.

In the early years of the twentieth century, jewelers’ enthusiasm for platinum could be seen in design flourishes. The metal is dense and ductile. It can be manipulated into millegrain details on a jewels edge or cut-out work anywhere on the surface. Platinum can be made into segments that are no thicker than a piece of aluminum foil.

During the 20th century, how jewelers worked with platinum on the bench shifted with changing styles. In the art deco era, for example, it was shaped into settings around geometric gems. In later years it was formed into lean lines for big diamond and gem-set jewels.

In the 21st century platinum’s role in jewelry has changed in some ways and not at all in others. It is still considered the ultimate metal for High Jewelry, the most important pieces.

Platinum has always remained the best choice for engagement rings because it is the most durable metal. It is far more resistant than gold to the wear and tear that comes along with sporting a jewel on your hand every day.

One somewhat new role for platinum is that it is considered an artistic choice for designers who are looking to make a statement in metal. There has also been an increasing shift from it being perceived only as a metal for eveningwear or engagement rings.

Now designers are working with it in their daytime jewels. It is a turn of events to celebrate along with Queen Elizabeth’s Platinum Jubilee.

Richard Burton Didn’t Propose to Elizabeth Taylor With A Ring