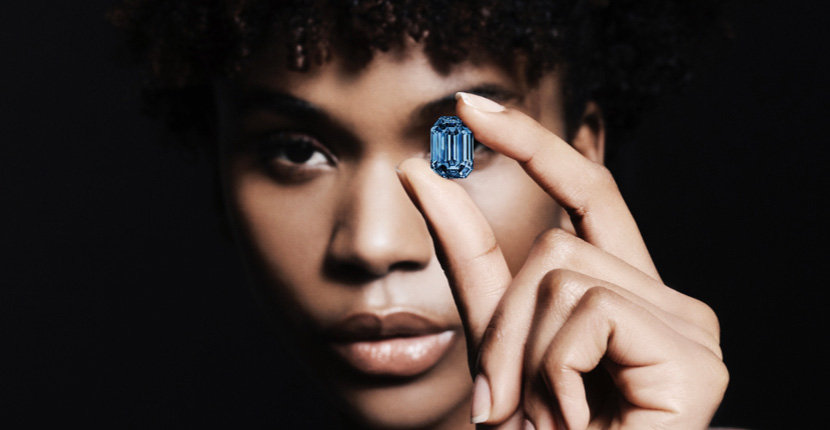 Why The De Beers Cullinan Blue Diamond Is Special

February 16, 2022—It’s a jaw dropping gem. Today Sotheby’s unveiled the De Beers Cullinan Blue Diamond, “one of the world’s great natural treasures.” The details on the diamond read something like a football player’s statistics. There is a lot of exceptional numbers, facts and comparisons.

It is the largest Fancy Vivid Blue ever to appear at auction weighing in at 15.10-carats. For those of you keeping score it edges out in size the 14.62-carat Oppenheimer Blue, graded in the same category and sold at Christie’s in 2016 for around $58-million.

Sotheby’s estimate for the De Beers Cullinan Blue Diamond is around $48-million. Based on recent history, it will most likely go for more.

The step-cut shape of the diamond is one of the details that make it so exceptional. The gem was cut by Diacore’s master diamond cutters working in concert with De Beers. The process took a year. According to the GIA Monograph, “achieving a Fancy Vivid color grade in a step cut or emerald cut adds to the rarity, since most other fancy shapes intensify the body color more efficiently in the face-up position than step cuts.”

In other words, the flat surface on the top of the gem and the long facets of the step cut don’t bounce a lot of light around. Being able to cut the gem in this way proves the intensity of the natural color.

The GIA (Gemological Institute of America) ranked the DeBeers Cullinan Blue perfect according to every criterion. Fancy Vivid Blue is the highest ranking for a colored diamond. No more than 1% of blue diamonds receive it. The gem is Internally Flawless. It was found to have an excellent polish and to be of Type IIb, a category which represents less than 0.5 % of all diamonds.

If you are wondering what makes a blue diamond blue, it’s a fabulous fluke of nature. Scientifically speaking, trace amounts of the rare element boron are within the diamond crystal lattice.

Another astonishing fact about the gem is that it was recently discovered. In 2021, it was unearthed at the Cullinan Mine in South Africa, one of the very few sources in the world for extremely rare blue diamonds.

Who buys blue diamonds today? Rock hounds with deep pockets. Hong Kong billionaire Joseph Lau purchased the 12.03-carat Blue Moon diamond in 2015 for his daughter Josephine who was seven at the time.

The De Beers Cullinan Blue will be sold at Sotheby’s in Hong Kong on April 27. How will it match up in history?

Following are the benchmarks that have happened in recent years and Sotheby’s notes on the sale of blue diamonds.

While a very small number of important blue diamonds were sold at auction over the last two decades, it was not until 2007 when the landmark Sotheby’s auction in Hong Kong sold a 6.04 carat, internally flawless emerald-cut Fancy Vivid Blue diamond for a record price of US$1,321,495 per carat, breaking the 20-year- old record held by the famous ‘Hancock Red’, and propelling all sizable Fancy Vivid Blue diamonds to new market levels of a minimum of US$1,000,000 per carat.

Since then, blue diamonds at auction have had an admirable auction track record. However, all previous prices were totally eclipsed first in 2014 by the Mellon Blue Diamond, renamed ‘The Zoe Diamond’ at Sotheby’s New York, which sold for US$32.6 million (US$3,348,205 per carat). In 2015, records shattered again when Sotheby’s Geneva sold ‘The Blue Moon of Josephine’, a 12.03 carat cushion-shaped Internally Flawless Fancy Vivid Blue diamond for US$48.5 million (US$4,028,941 per carat), which still holds the price- per-carat auction record for any diamond or gemstone.

Sotheby’s has realized four of the past five highest prices for Fancy Vivid Blue diamonds.

The Memory of Autumn Leaves

The Jewelry School That Changed Everything