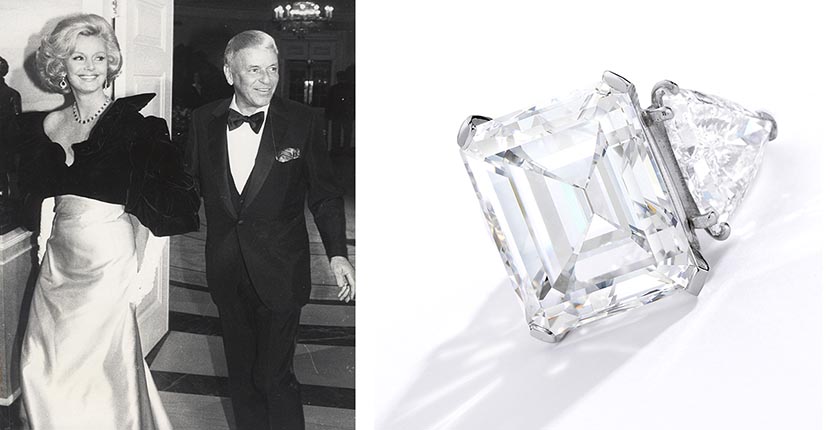 One of the great things about seeing a celebrity’s collection at an auction preview is hearing the personal stories attached to the pieces. When Sotheby’s Senior Specialist Carol Elkins took a selection of the December 4, 2018 sale Lady Blue Eyes: Property of Barbara and Frank Sinatra to Palm Springs, California—the oasis in the desert where the couple met and a place they called home—she found out what the Sinatras where like as neighbors. One acquaintance told Carol how Frank enjoyed reading the newspaper in the morning to see what was happening in his local community. If he came across an article where people were in need and there was a way he could help financially, he did. He usually did so anonymously. Naturally, Frank Sinatra’s generosity extended to his fourth wife Barbara who he gave several gorgeous and grand jewels over the course of their marriage including pieces from Van Cleef & Arpels, Bulgari, Marina B and David Webb as well as her sensational diamond engagement ring.

A statuesque blonde who was born in Missouri, Barbara Ann Blakeley moved to California with her family, married and divorced her first husband and eventually became a Las Vegas showgirl. In Sin City she met her second husband, Zeppo Marx of the Marx Brothers. Their home in Palm Springs was located next door to Frank Sinatra. When Barbara’s marriage with Zeppo ended, she began a relationship with the legendary crooner. 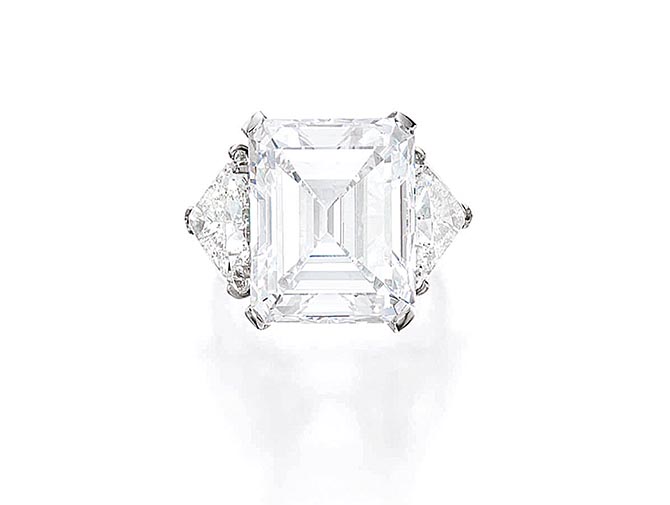 The author of Barbara Sinatra’s 2011 New York Times bestselling biography, Wendy Holden, says the 20-carat diamond ring in the Sotheby’s auction was given by Frank to Barbara at a pivotal point in their four tempestuous years of courtship. He tossed two huge diamonds on their bed and told her to pick one. “Once her chosen stone had been set he dropped it into her glass of champagne, but he still hadn’t proposed,” Wendy explained “Until she made him choose which finger to put it on.”

The original proposal story is all very Rat Pack cool and becomes even more Hollywood Golden Age glam with the details of the diamond in the engagement ring that carries an estimate at Sotheby’s of $1,000,000-$1,500,000. It is a 20.60-carat emerald cut flanked by two triangular shaped stones that act as a sort of architecture to lift the gem above the finger and make it fit comfortably. The center stone is accompanied by a GIA report stating that the diamond is D color, VVS1 clarity and a letter from the GIA stating that the diamond has been determined to be Type IIa. In other words, it’s the crème de la crème. 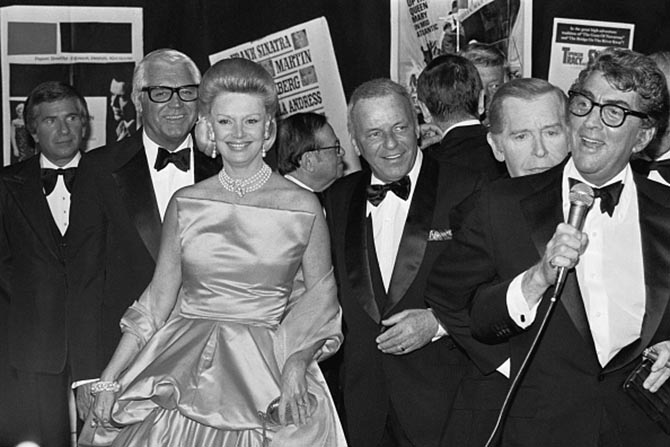 Singer Dean Martin (at right) announces the arrival of Frank Sinatra and his wife, Barbara, at a gala celebration at Ceasar’s Palace in Las Vegas to pay homage to the entertainer saluting his 40 years in show business and celebrating his 64th birthday. At left is Cary Grant and behind Martin is Milton Berle. Photo Getty

The couple were married in 1976 at Walter Annenberg’s lavish Sunnylands estate in Rancho Mirage. During the course of their life together Barbara was as charitably active as her husband. One of her primary causes was the Barbara Sinatra Center for Abused Children. “Coming face to face with those innocent little children who had been so mistreated tore my heart out,” Barbara told her biographer. “That’s when I knew I had to get more involved.” Every year she held a celebrity invitational golf tournament and black-tie dinner with marquee performers to raise money for the cause. A portion of the proceeds of Sotheby’s Lady Blue Eyes auction will benefit the Children’s Center.