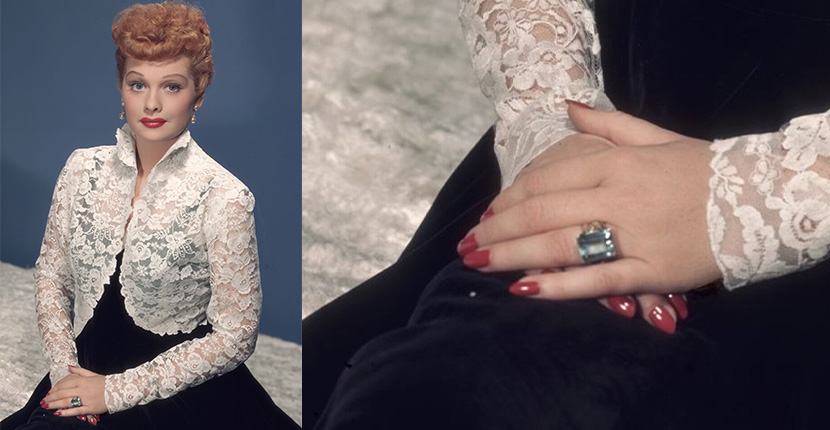 December 23, 2021—You learn a lot about the personal and professional lives of Lucille Ball and Desi Arnaz in Being the Ricardos starring Nicole Kidman and Javier Bardem. The trailblazing American comedian and Cuban bandleader were married and played Mr. and Mrs. Ricardo on TV in their wildly popular show I Love Lucy from 1951 to 1957. The series gave them a lot of power in Hollywood and made them the target of the tabloids.

Among all the revelations in the Aaron Sorkin film, which is available to stream on Amazon, I was fascinated by many topics but tops on the list (no surprise) was the large emerald-cut aquamarine engagement ring worn by Nicole Kidman. No details were shared about the ring in the movie. It was such a unique choice for an engagement ring, I knew it must be based on something Lucy really wore and it was.

The story Lucille Ball shared about her wedding rings in her autobiography Love, Lucy doesn’t exactly explain where the engagement ring came from but it does add a layer of detail. When the couple eloped in 1940, they decided to get married on a Saturday in Connecticut. In the rush to the alter, Desi bought Lucy a brass ring from Woolworth’s. Lucy felt sentimental about the jewel and kept it for years in her collection.

At some point later, Lucy acquired the emerald-shaped aquamarine ring. Style-wise it is akin to her statement making fiery red hair. A natural brunette the transition to ginger, apparently a suggestion from one of the studios, really lit up her style.

The size of the stone in Lucy’s engagement ring was pretty substantial and could have been upwards of 30 or more carats. Who made it or where it was purchased has never been revealed.

Legions of Lucy fans have theories about it. Some believe Desi bought the aqua to match Lucy’s blue eyes. Others think Lucy bought the jewel for herself. I suppose, at least part of the thinking being, that she would have had to be involved in the choice of such a unique engagement ring.

In the late 1930s and early 40s, giant semiprecious stones were available in abundant supply from mines in Brazil. Aquamarines, citrines and amethysts among other gems became the centerpiece of bold gold retro-style jewels with a modernist swoosh in the metal as well as cocktail rings.

Joan Crawford was among the many glamorous women who flaunted cocktail rings with semiprecious stones during the era. She had a few including a 75-carat amethyst cocktail ring from her favorite jeweler Raymond C. Yard.

Like many Hollywood actresses from the first half of the twentieth century, Lucy made her extravagant aquamarine ring a visual prop in publicity stills. For the 1941 production Look Who’s Laughing, the actress paired her engagement ring with costume jewels from Joseff of Hollywood. (The Joseff torque fringe necklace above is recreated in Being the Ricardos.)

If you are wondering what happened to Lucille Ball’s aquamarine engagement ring, apparently it was stolen along with other jewels from her hotel room in Chicago. It is not clear when the robbery happened. Photos of Lucy show her wearing the ring through at least the 1953 Emmys. Lucy and Desi divorced in 1960.

While Lucille Ball was not known for her jewelry, later in life she did add some wonderful pieces to her collection including a couple of items from Van Cleef & Arpels. One of her Van Cleef jewels, a Maltese Cross pendant made in 1972 and set with onyx, emeralds and diamonds was acquired by the Van Cleef & Arpels Heritage Collection. In 2015, the necklace was part of a mini-exhibition of historic Hollywood jewels at the Beverly Hills Van Cleef & Arpels boutique.

By the time Lucy was shopping at Van Cleef she had taken over Desilu Productions, becoming the first woman to run a major television studio. A couple of the shows her company produced included Mission Impossible and Star Trek.

Marlene Dietrich’s Emeralds On and Off Screen