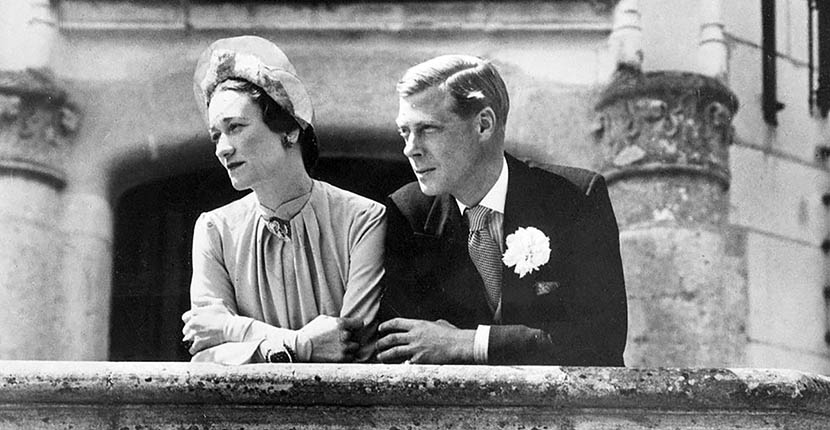 The Duke and Duchess of Windsor on their wedding day June 3, 1937 Photo Getty 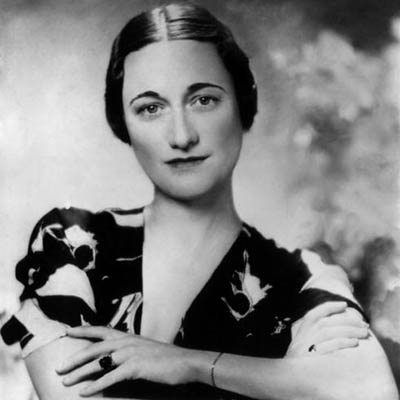 The Duchess of Windsor posing in her emerald engagement ring by Cartier on December 3, 1936, seven days before Edward VIII abdicated. Photo Getty

You are not supposed to wear an emerald for an engagement ring. Compared to a diamond, the stone is soft, can scratch easily and get beat up with everyday wear. But the Duke of Windsor didn’t care. He proposed to the American socialite Wallis Simpson with a beautiful emerald ring. In celebration of the couple’s wedding, 80-years ago this week, on June 3, 1937 to be exact, here is a look back at that rebellious jewel.

“We are ours now 27 X 36” was the message King Edward VIII had engraved on the interior of the classic platinum engagement ring set with a dazzling 19.77-carat rectangular emerald flanked by diamond baguettes. Jacques Cartier, who ran the London branch of the famous French firm told the English writer Marie Belloc Lowndes that the gem was one of two stones cut from an emerald as large as a bird’s egg that once belonged to a Grand Mogul.

Edward proposed with the ring made by Cartier on October 27,1936, a date that is the key to the inscription—27 the day, X the month, and 36 the year. The date was significant to the couple because it marked the beginning of Simpson’s divorce proceedings from Ernest Simpson. 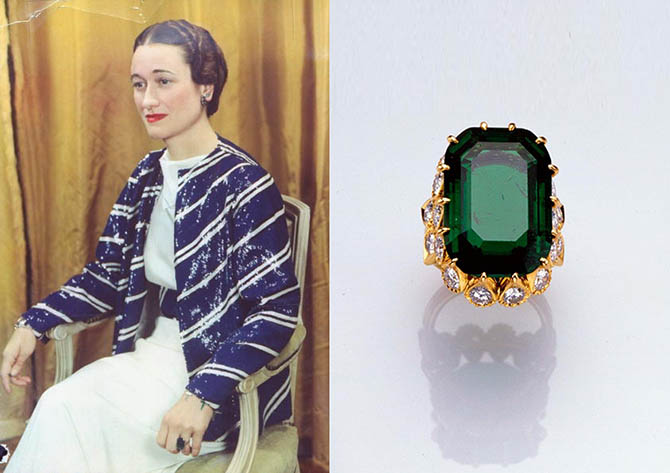 A rare color image of the Duchess of Windsor from the 1930s wearing her emerald engagement ring in the original platinum mounting. The ring on the right is the same emerald remounted by Cartier in a more elaborate design for the couple’s 20th wedding anniversary. Photo Time & Life Pictures 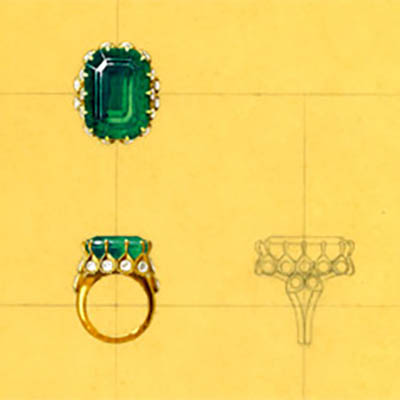 When the prime minister, the press and the public learned about the king’s desire to marry an American woman soon to be twice divorced, it became a national crisis. The pressure was so intense the king decided to abdicate. In his radio address to the nation on December 11, 1936, he said, “I have found it impossible to carry the heavy burden of responsibility and to discharge my duties as king as I would wish to do without the help and support of the woman I love.”

To celebrate their 20th anniversary, Wallis Simpson, who became the Duchess of Windsor when the couple married had Cartier remount the ring into an elaborate gold-and-platinum ring reflecting the lavish mid-century styles. Of course, she kept the original mounting her entire life.

Details Left Out of ‘The Crown’ On Elizabeth’s Engagement Ring, Wedding Jewelry