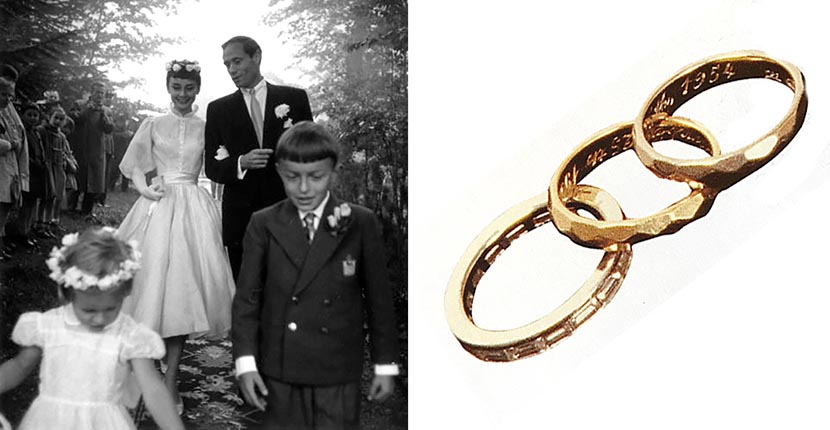 The style icon had very specific taste in her bridal jewelry

From the moment Audrey Hepburn burst on the American scene in 1953 with her first Hollywood movie Roman Holiday, she 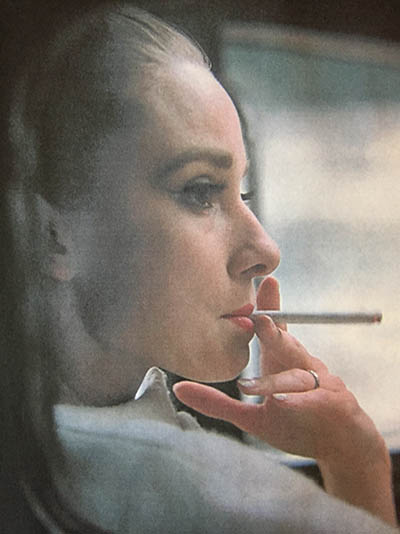 became a beloved star for her delightful performance. In fact, she won an Academy Award for the role. Hepburn went on to make a series of popular films including Sabrina (1954), Funny Face (1957), Breakfast at Tiffany’s (1961) and Charade (1963).

She also became famous for her classics-with-a-twist way of dressing that virtually seemed the same on-screen and off. Her ballerina flats, button down shirts, trench coats and Givenchy perfection have been perpetually inspirational. Arguably, Audrey’s style is as influential today as ever. There are countless publications, Instagram accounts and Pinterest pages devoted to her look and lifestyle. Any number of her quotes from interviews and movies have become memes.

Next month, I expect the steady simmer of interest in Audrey to be turned up to a full boil. A large selection of her personal effects are being sold by her family at Christie’s in London on September 27, 2017. There will also be an online portion of the sale, which usually means memorabilia within comparatively reasonable price ranges. It goes live on September 19 and ends on October 3. All of the pieces from the collection that her sons Luca Dotti and Sean Ferrer have decided to sell have not been released yet, but there is a preview of items on Christies.com. It includes Givenchy clothing, monogramed accessories, ballet slippers galore and even an annotated copy of her Breakfast at Tiffany’s script.

Items from the Personal Collection of Audrey Hepburn being sold at Christie’s in London on September 27, 2017: Ballet slippers, a Givenchy dress and a Burberry trench coat. Photo courtesy of Christie’s

While this sale marks the first time these pieces are being seen up close and offered to the public, her sons have shared parts of her personal collection in books and exhibitions in the past. In 2003, there was a small display of select items from her wardrobe including her wedding dresses and the engagement ring and wedding bands from Mel Ferrer.  The mini exhibit was done in conjunction with Sean Ferrer’s best-selling book Audrey Hepburn: An Elegant Spirit.

At the time Penny Proddow and I were writing With This Ring: The Ultimate Guide to Wedding Jewelry. When we asked Mr. Ferrer for an image of the rings, he graciously had the jewels photographed for the publication. (It is on the right at top.) We were thrilled to have the pieces in the book that perfectly reflected Audrey’s understated style. Her svelte and stunning engagement ring wasn’t a solitaire diamond. It was a slender platinum eternity band with channel set baguette-cut diamonds. Ferrer bought the ring from a well-respected European jeweler, Gübelin of Zurich. 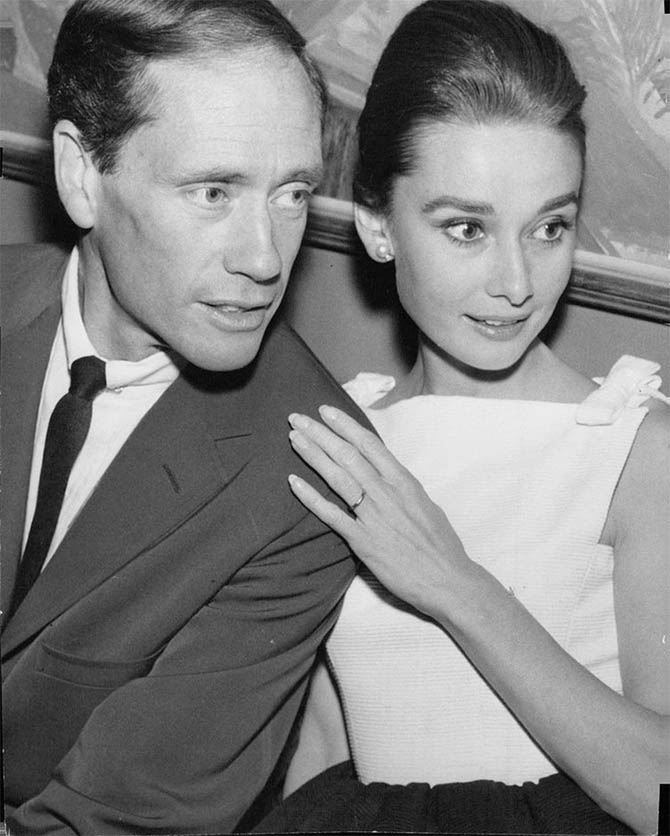 Mel Ferrer and Audrey Hepburn wearing one of her wedding bands in 1959. Photo @rareaudreyhepburn/Instagram

It has been reported by more than one of Hepburn’s biographers, including Barry Paris, that the star encouraged Ferrer to propose by making her feelings about him totally clear. For his thirty-seventh birthday on August 25, 1954, she gave him a platinum Rolex engraved with the title of a Noel Coward song, “Mad About The Boy.” Ferrer formally proposed shortly thereafter and the couple wasted no time getting married.

On September 25, 1954 at a small chapel a short walk from their villa in Burgenstock, Switzerland, Audrey Hepburn and Mel Ferrer tied the knot. The bride wore a Pierre Balmain white organdy dress and crown of white roses. During the ceremony Ferrer gave Hepburn two wedding bands. One was white gold and the other was pink gold. The bands, that were exactly the same style, were both decorated with a faceted pattern. Each of the rings was engraved with the date of the wedding. It is not known who made the jewels. 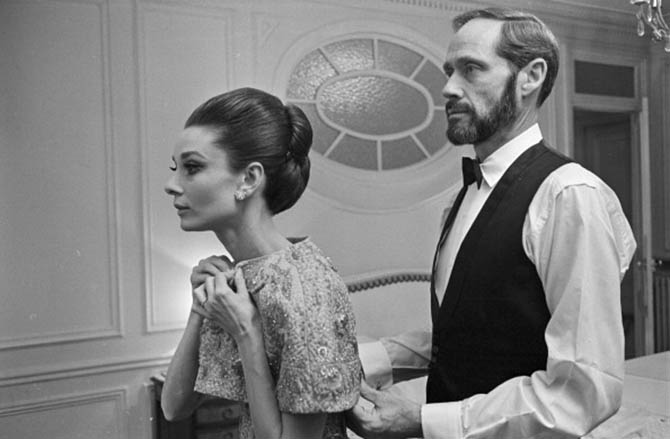 Mel Ferrer with Audrey Hepburn who is wearing one of her wedding bands. The couple is getting ready to attend the 1964 Paris premiere of Hepburn’s film ‘My Fair Lady.’ Photo Getty Images

Hepburn never, ever stacked the rings. That was not her look. It’s hard to know if she preferred the white or rose gold as so many photographs of her during her marriage to Ferrer that lasted until 1968 are not in color.  (The photo at top of Hepburn smoking in a taxi in Paris appears to be the white gold wedding band.) It seems she rarely wore the diamond eternity band.  If any of you Audrey experts out there have more detail do drop me a line.

What Tiffany Jewelry Did Audrey Hepburn Wear in Breakfast at Tiffany’s?