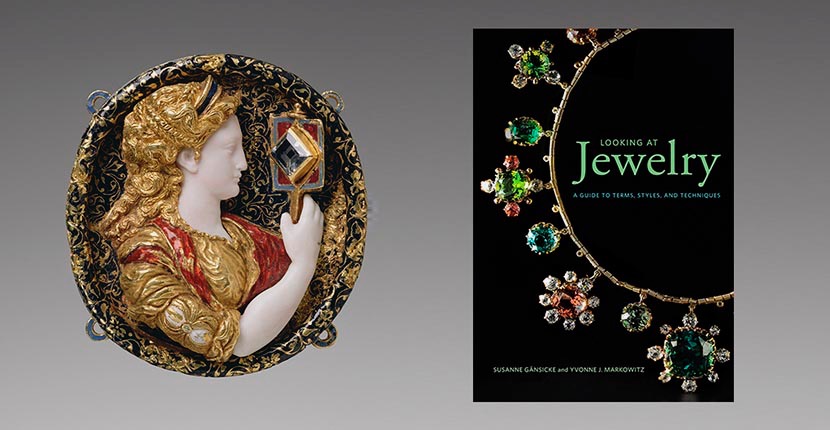 Hat Badge Representing Prudence made in France around 1550–1560 and the cover of 'Looking at Jewelry: A Guide to Terms, Styles, and Techniques.' Photo courtesy and Getty

A New Book Covers Jewelry Terms from A to Z

‘Looking At Jewelry’ is a guide to terms, styles, and techniques

Jewelry terminology can be confusing. Any number of words are misnomers. It’s remarkable emerald-cut was chosen to describe a rectangular shaped diamond and stranger still that the name stuck. Lots of jewelry jargon is French with no English alternative. Bijoux, minaudiére, sautoir and en tremblant are just some examples.

In my lifetime, there are styles that have gone from being called one thing to another. Cartier’s Tutti-Frutti used to be referred to as Fruit Salad. Van Cleef & Arpels trademarked the term Mystery Setting for the technique the firm popularized that was once called Invisible Setting. So much of jewelry history is oral history, it has not only resulted in confusion about things from the past, but contemporary terms that spring up in popular culture have also been misconstrued.

If you want to learn more about the jewelry lexicon, the Google does not always come through with an accurate definition. Up until now, the only book I had on my shelf for straight up jewelry definitions is a dogeared copy of The Illustrated Dictionary of Jewelry written by Harold Newman. The first edition of the publication came out in 1981. It can still be had for a few bucks and I highly recommend it. The book may not have the answers to everything, but it’s a nice starting place.

Now there is a new book that tackles the subject, Looking at Jewelry: A Guide to Terms, Styles and Techniques by Susanne Gänsicke and Yvonne J. Markowitz. It is a small volume of around 130-pages that covers jewelry terms from A to Z. Obviously, it is not comprehensive but it’s a nice addition to a library.

The authors kick the book off with a great concise Introduction on the place of jewelry and those who made it in various cultures throughout history. Honestly, the essay left me wanting a lot more. My favorite part was when they reviewed the importance of goldsmiths. They explained how “gold was as abundant as dust” in ancient Egypt. And how goldsmiths were such important members of society during the 15th and 16th centuries—think Benvenuto Cellini—they were depicted in portraiture. 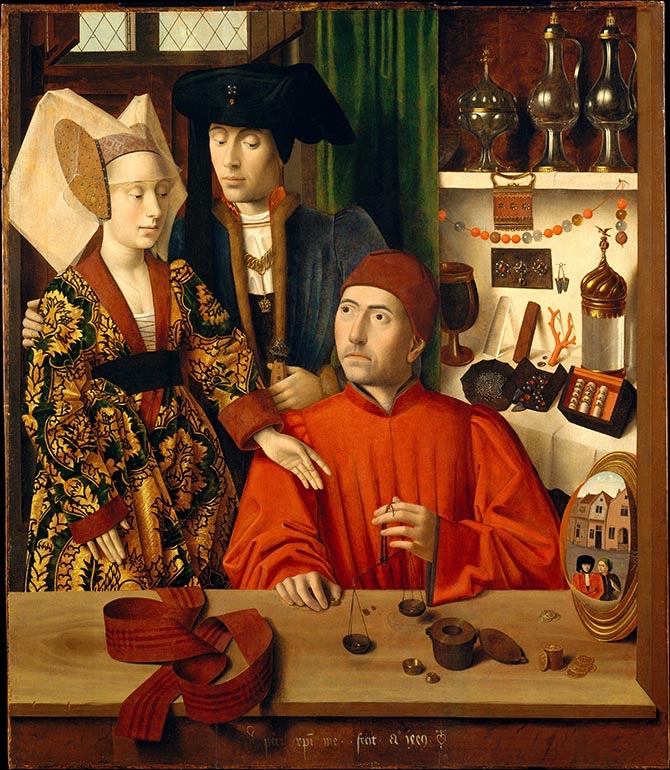 From ‘Looking At Jewelry,’ ‘A Goldsmith in His Shop’ painted by Petrus Christus in 1449. Photo Metropolitan Museum of Art

The dictionary part of the book, which forms the vast majority of the publication, is strongest in definitions for terminology relating to antiques, gems and general terms. There are words for styles of jewels like Acrostic. Simple terms such as rings and earrings are defined then broken down into various styles. Types of headgear ranging from crown, bandeau, circlet and diadem are perfectly reviewed.

Where the book is not as strong is in terms for modern jewelry such as Bling-Bling. They credit the origins of the style to the fancy French jeweler Cartier. It actually started in the 1990s with jewelers from the hoods of the hip hop performers. The authors fail to mention that the term, Bling-Bling, is universally credited to a rapper named BG and that by around 2011 was considered dead. 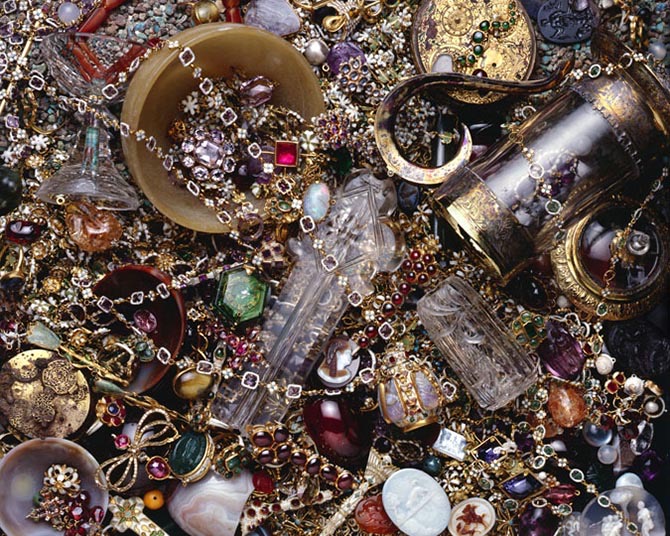 From ‘Looking at Jewelry,’ The Cheapside Hoard a collection of jewels from the late 16th and early 17th centuries. Photo Museum of London

The backstory on the tennis bracelet is also mixed up in Looking At Jewelry. Like so many journalists recently, they said the tennis bracelet term came into vogue in 1987 when Chris Everett had to stop play at the U.S. Open because she dropped her diamond line bracelet. I wrote a story, “The True Story of Chris Everett’s Tennis Bracelet,” on The Adventurine in 2017 in an attempt to clear up that piece of misinformation. In short, the bracelet was dropped when Everett was playing in 1978 and the facts were confirmed by the tennis champion.

As I said, jewelry terminology is confusing. Looking At Jewelry does get it right in the antique arena and it is a worthy addition to any jewelry library.

Italians Made The Best Patriotic Jewelry