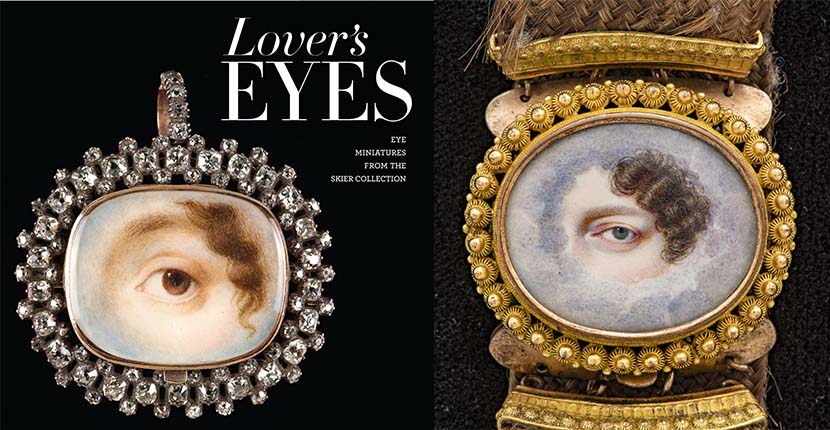 November 30, 2021—There is nothing miniature in the pleasure of Lover’s Eyes, Eye Miniatures from the Skier Collection by Elle Shushan (Author), Stephen Lloyd (Contributor) and Graham Boettcher (Contributor). This charming, beautiful and informative book of Lover’s Eye jewelry and object d’art is illustrated with over 135 stunning images. There’s a romanticism and poignancy to the story of why this type of jewelry came to be and how its popularity has surged and receded over the last two centuries.

From the beginning, hand-painted portraits of a single eye set in jewelry were a way to keep a loved one close or memorialize a deceased loved one. This book looks at the creation and appeal of these extraordinary bijoux and puts them in context of Georgian and Victorian portrait miniatures.

Images of Dr. and Mrs. David A. Skier’s collection—the most complete of its kind—illustrate several essays covering varied topics. Included is the history of the pieces, forgeries and fakes, the persistence of the eye image in art as well as an essay on the small masterpieces created by the artist Richard Cosway.

As we learn from the introduction, these special adornments began with a forbidden romance.

“When the Prince of Wales, later crowned King George IV of England laid eyes on the twice widowed commoner Maria Fitzherbert at the opera in 1784, it was love at first sight. British law forbade the Prince to marry Maria because she was Catholic. History tells us that George and Maria were wed in secret and that they exchanged miniatures depicting each other’s eyes, painted in watercolor on ivory and set into jewels, as tokens of their love for one another. Because each miniature represented only a single eye, the anonymity of the lovers was preserved.”

Thus began a fad of having your lover’s eye immortalized. The first infatuation ran from 1790 to 1820. Over the last two centuries, it’s had several resurgences. As the book details, a second burst occurred at the turn of the 19th century. Using headlines and clips from newspaper and magazine articles from the period, we learn more about the public’s interest in owning small brooches, rings, bracelets and objects decorated with the portraits.

Pearls surrounding the eyes symbolize tears. Coral is intended to give the wearer strength. Having a locket of woven hair placed behind the portrait, or putting a frame of golden daisies around the portrait gives us insight and an education in how the language of gemstones and flowers was used to decorate the pieces.

The authors introduce us to the early and late artists who specialized in the art of painting these miniatures, including two female artists who came to America in the early 1900s.

The South African British born Mary Helen Carlisle was interviewed in 1909 by Brooklyn Magazine.  When the reporter asked her to reveal some clients, she refused saying: “No… I can’t tell you the names of the New York women for whom I have painted eye miniatures as they had done them in secret. You see they were probably not intended for their husbands.”

But secret lovers weren’t the only reason for the tokens of affection. Surveillance was as well. In Graham C. Boettcher’s essay, “Love Never Dies,” he explains it was often husbands and male lovers, going back to the early 18th century, who had their eyes painted for their wives and lovers to wear, a way he says of watching out for them. And for letting other suitors know their women were taken.

Lover’s Eyes, is a welcome addition to any jewelry lover’s library, a much-needed treatise and examination of often overlooked but very special treasures.

The New Edition of ‘Understanding Jewellery’