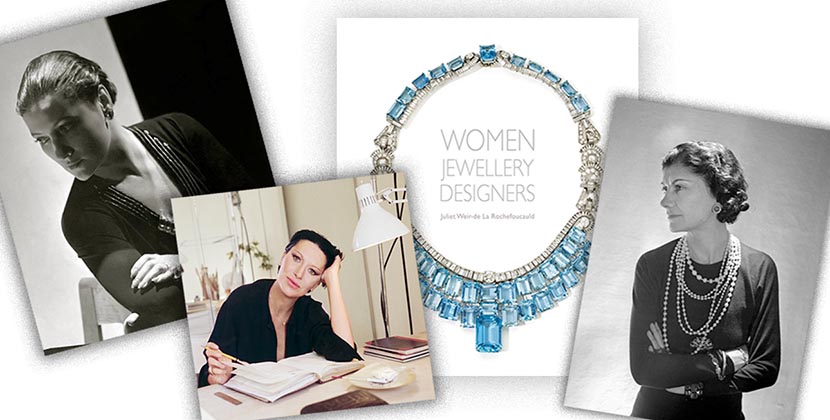 In this era of female empowerment, a new book that champions the important women jewelry designers is refreshing and timely. Women Jewellery Designers by Juliet Weir-de la Rouchefoucauld is about 50 impactful women who have left an indelible mark. The type of jewelry covered in the book ranges from High Jewelry to art pieces. There is nothing particularly that distinguishes the jewels as being designed by women, besides perhaps the fact that many are modular, created with an attention to detail for a comfortable fit. What unites the women profiled is a shared passion for jewelry and superb craftsmanship, as well as the challenge of pursuing their careers in a male dominated industry. 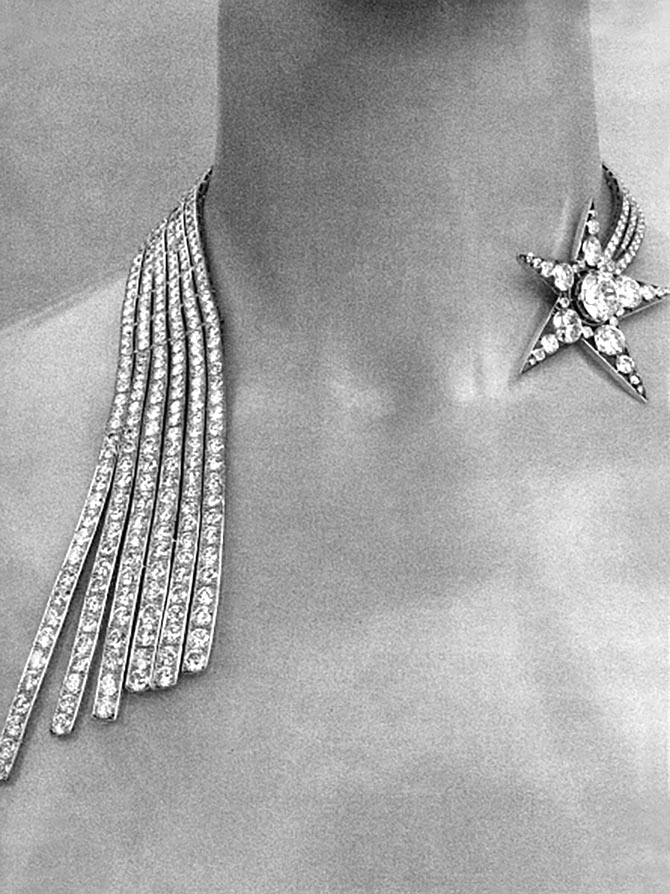 The first section of the book, “Between the Wars: The Awakening,” covers several super talents who have been more or less been forgotten over the years including Alma Pihl, Juliette Moutard and Olga Tritt. There are also some of the most well-known female designers ever to conceive a jewel.

One fascinating story involves Coco Chanel. When the International Diamond Corporation chose the fashion designer to create an exclusive collection of diamond jewelry to renew interest in diamonds during the Depression, her nomination caused an enormous backlash from the male-driven jewelry industry.  They seriously doubted that a dressmaker knew anything about diamonds. An amusing Appendix titled “The Chanel Affair” includes correspondence among the Place Vendôme jewelers voicing their pedantic frustrations. 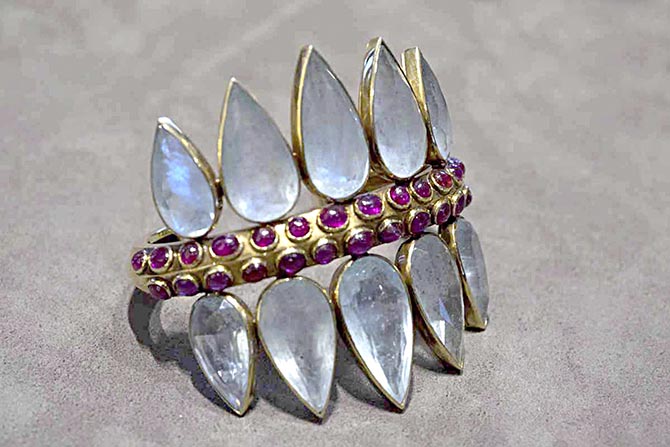 Suzanne Belperron is also in the section “Between The Wars.” A confident and determined woman who broke the rules of 1920s design to create bold and daring work that incorporated unconventional materials. She began her career working for the French house René Boivin. Driven by her conviction, she eventually left the relative comforts of the house of Boivin to design for gemstone dealer Bernard Herz where she was given more artistic freedom. When trouble came during World War II and the Nazi’s Gestapo unit arrested the Jewish Herz and deported him to a concentration camp, Belperron saved the company by registering it with her name as Herz-Belperron. She continued to work there for the next 30 years. Belperron’s designs, Weir-de la Rouchefoucauld, notes “are as contemporary today as they were all those years ago, when she conjured them up in the 1920s and ’30s.” 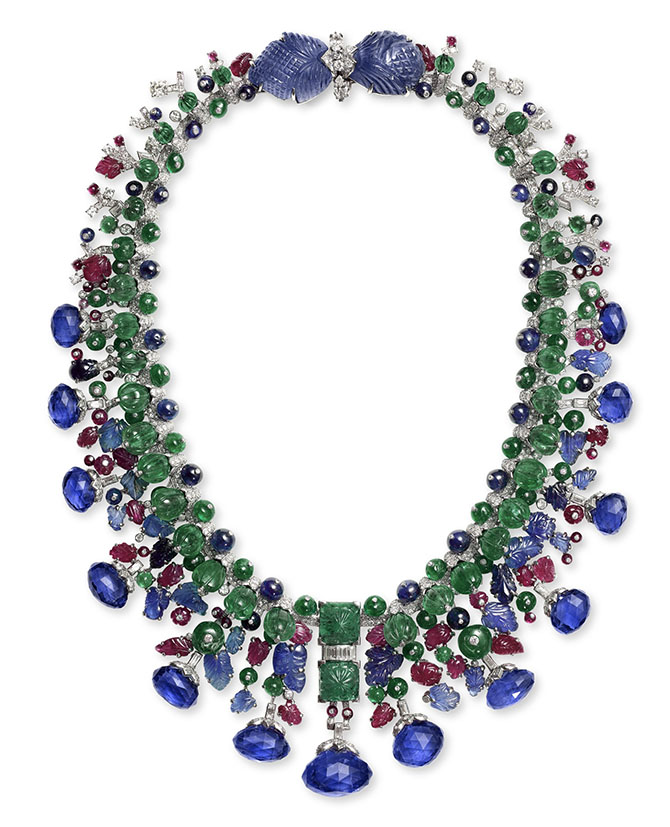 Jeanne Toussaint is a legendary name in jewelry thanks to her magnificent contributions to Cartier. She conceived many iconic designs that were fashionable in a way even amazing Cartier jewels weren’t. They were more relaxed and instantly recognizable. Another interesting Appendix in the book contains a 1933 letter from Louis Cartier to his son, telling him he had chosen Toussaint as Creative Director for Cartier haute joaillerie, despite the fact that she lacked proper training, had no experience as a jeweler, and was up against celebrated male designer Charles Jacqueau for the position. 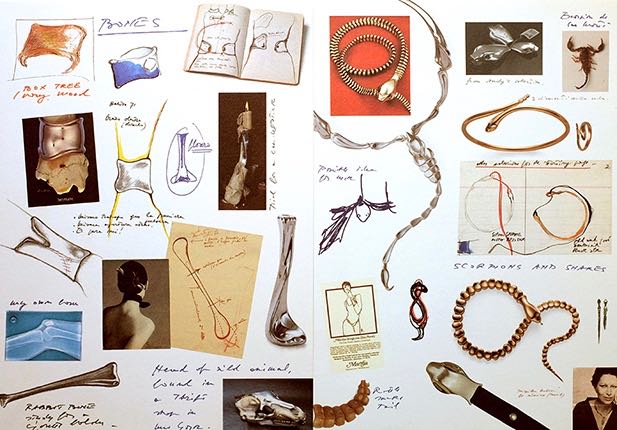 Pages from ‘Fifteen of My Fifty With Tiffany’ by Elsa Peretti

“Jewellery is no longer the male dominated domain of yesteryear, women are to be found in every aspect of jewellery design and manufacture,” is how Weir-de la Rouchefoucauld decribes the status of women in “Post-war to 1980s: Full Steam Ahead—The Search for the Perfect Design.” Standouts from this section include Elsa Peretti, Marina B and Paloma Picasso: each of these women introduced simplicity and form to what has become classic and iconic jewelry.

The designer behind Marina B, Marina Bulgari, left her family’s company where her three Bulgari brothers were at the helm, so she could launch her own line and establish complete creative freedom. She even introduced her own signature gemstone cuts, a first among women jewelers. Paloma Picasso was savvy about becoming the face of her own brand at a time when that had never really been done. Her strong features and undeniable resemblance to all the women in her father’s art helped launched her tremendously successful line for Tiffany & Co. Peretti, who also designs for Tiffany, is so important to the company’s bottom line that in 2012 when she was thinking of leaving and taking all her designs, the public company was obliged to inform the New York Stock Exchange. 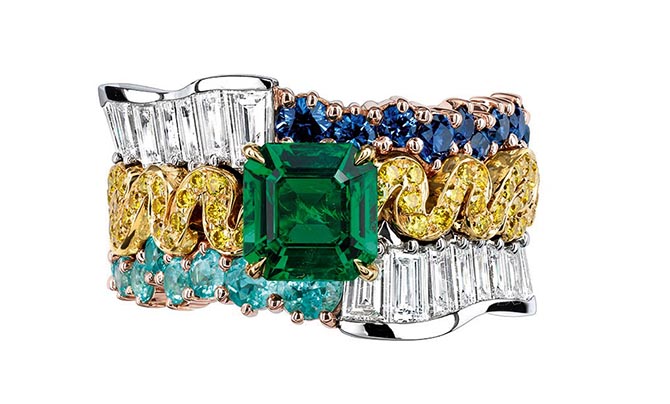 The last section of the book, “What’s Happening Now in the Field of Jewellery Design,” covers a myriad of women. Not only do they face the challenge of being ethically and ecologically aware of every stage of the jewelry making process—mining the gold, sourcing and producing the gemstones, marketing the collections in a socially responsible and conscious manner—they must also navigate the vast and complex world of social media to tell their stories. “Creativity never closes shop and it is an exhausting round of production, social media and shows—it is not for the faint of heart and the result is a group of passionate, creative and savvy women, who are pushing the boundaries just to be seen and heard above a sea of other brands,” says Weir-de la Rouchefoucaul.  Victoire de Castellane, Delfina Delettrez, and Michelle Ong are a few of the remarkable contemporary jewelers in the section.

The book concludes with a few details about the woman featured in the book, including a photo of each, suggested reading and website addresses.  The women de La Rochefoucauld chose to profile are all fascinating: whether their story is poetic, intellectual, figurative or conceptual, each woman is worth getting to know.

A Peek at the Belperron Boutique