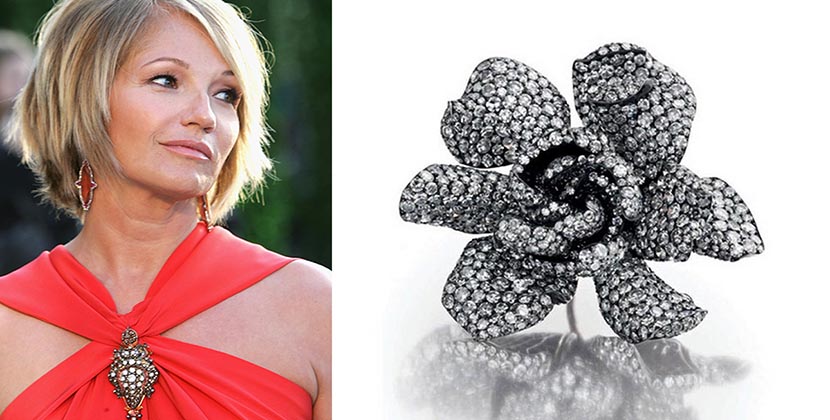 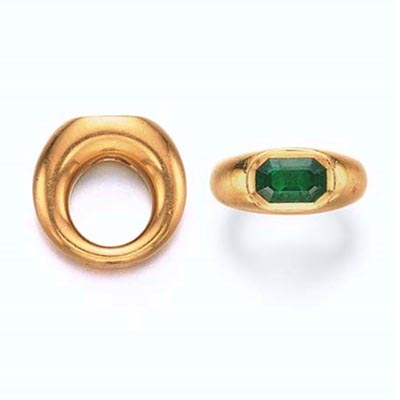 Side and front views of the octagonal-cut 3.92-carat emerald and gold ring by JAR from Ellen Barkin’s collection. Photo Christie’s

December 2017—Some jewels can bring back a flood of memories in an instant. As soon as the Christie’s Specialist Jean Kim told me the gold and emerald JAR ring, I was looking over in the December 6, 2017 Magnificent Jewels sale was originally part of Ellen Barkin’s collection, well it gave me major flashbacks.

In 2006 New York was buzzing about how Barkin’s husband, Revlon executive Ronald Perelman, surprised her with divorce papers after six years of marriage. To add personal insult to emotional injury, the billionaire had guards monitor her exodus from their townhouse on East 63rd Street for all the neighbors and press to see.

Well, it didn’t take long for the actress to get revenge. She packed up her world class collection of around 100 jewels, all gifts from the mogul, and took them to Christie’s to sell at auction. Then she proceeded to give interviews to the press. While what she could talk about was apparently limited due to her $20-million-dollar prenuptial agreement, the actress who was 52 at the time, still managed to say a lot in her signature direct and spicy way. In a profile for the New York Times, Barkin described herself in the marriage as “an accessory, being accessorized, the perfect one—age-appropriate, the mother of two children, successful in her own right.’’ She added about the jewels, “These are just not memories I want to wear out every day.” 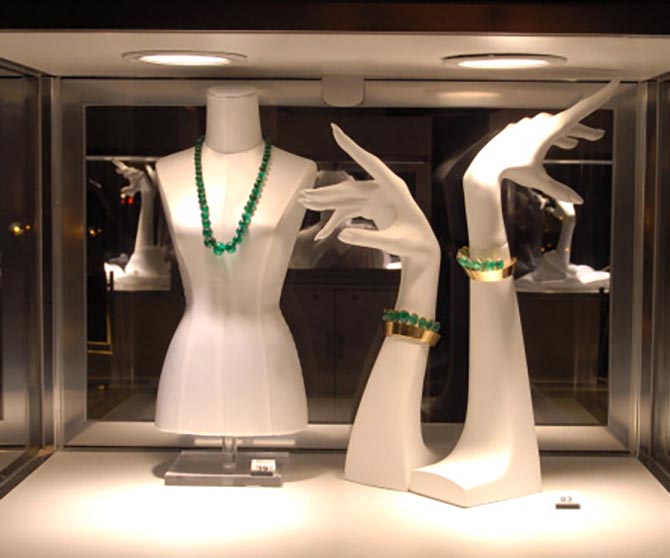 Display of Ellen Barkin’s emerald necklace and Belperron coronet cuffs from the collection of the Duchess of Windsor at Christie’s in 2006. Photo by Marko Georgiev/WireImage

Barkin may have lost interest in the collection, but it was totally captivating for jewelry lovers and looky-loos. Vintage pieces with provenances as good as it gets were in the assortment. There were two items from Duchess of Windsor’s jewelry box, an art deco diamond ruby and enamel bag and the highly influential emerald and gold cornet cuffs by Belperron. She also had an emerald necklace that had once belonged to Doris Duke. Vintage pieces without a provenance were equally impressive from the antique diamond earrings to an art deco ruby and diamond bracelet from Bulgari and a breathtaking diamond, gold and emerald cuff by Van Cleef & Arpels. 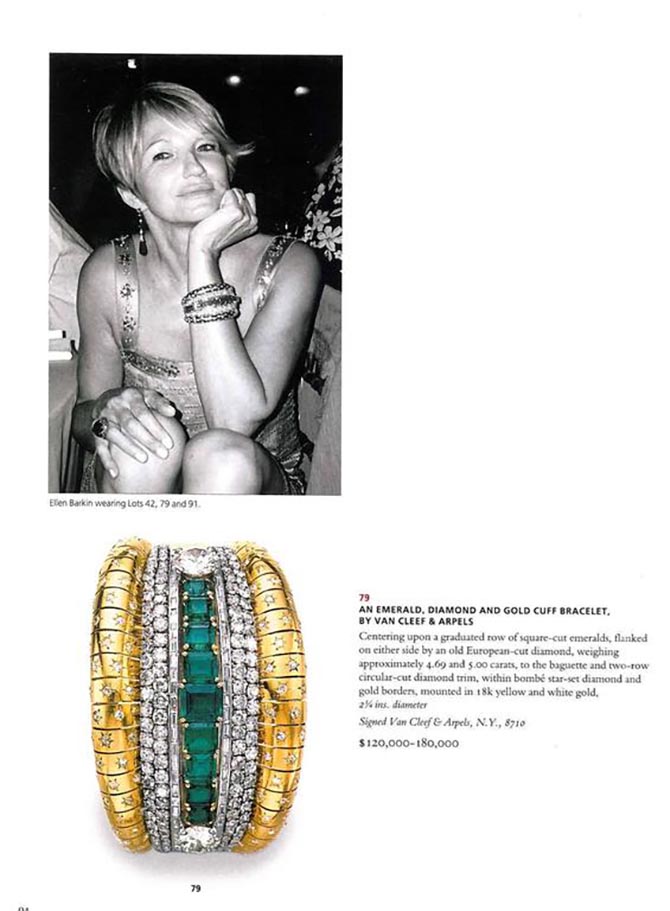 A page from the Christie’s Ellen Barkin October 10, 2006 catalogue showing the actress wearing her emerald, diamond and gold cuff bracelet by Van Cleef & Arpels and the jewel. Photo via 1st Dibs listing of the catalogue

Among the treasures, the most excitement surrounded Barkin’s array of jewels by JAR. According to the legend about the American designer Joel Arthur Rosenthal, who lives and works in Paris, he only makes around 80 jewels a year. The actress had 17 JAR jewels, an astounding number. A few of the most eye-popping were the thread rings, designs with pavé-set galleries that looped around big stones. Barkin’s largest thread rings had an oval cut 22.76-carat diamond and a 31.85 carat cushion-shaped fancy deep orangey-brown “apricot” diamond ring. 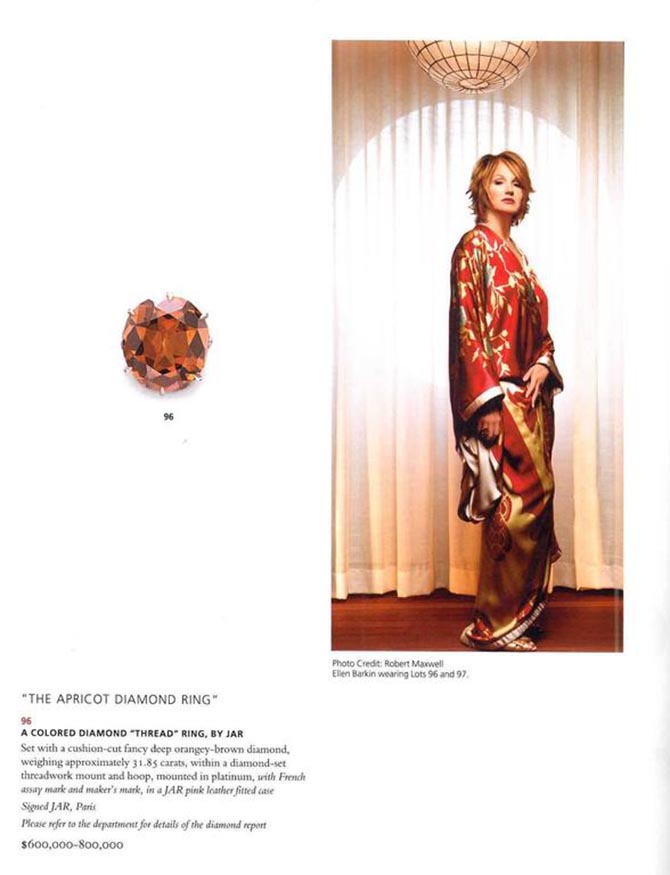 A page from the Christie’s Ellen Barkin October 10, 2006 catalogue showing the actress wearing her ‘Apricot’ diamond thread ring by JAR and the jewel. Photo via 1st Dibs listing of the catalogue

Barkin said her favorite piece among all the jewels was her topaz, ruby and diamond earrings by JAR that she wore to the Vanity Fair Oscar party in 2005 as well as on many other occasions.  One of the most popular designs among the press and public was her diamond Gardenia JAR ring. 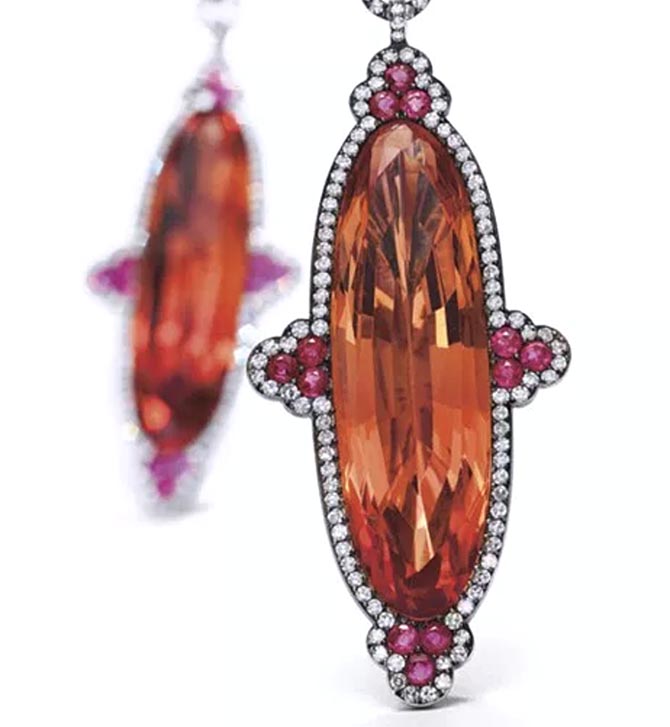 When the jewels were sold on October 10, 2006, three pieces broke the $1 million threshold.  Two were by JAR: the 22.76-carat thread ring and a pair of diamond bangles. The other seven figure jewel was a 30.8-carat diamond ring. Including commissions the sale of Barkin’s collection added up to $20,369,200. “Their love is cold, but the ice was plenty hot,” was how The New York Post opened the story reviewing the big numbers of the sale. 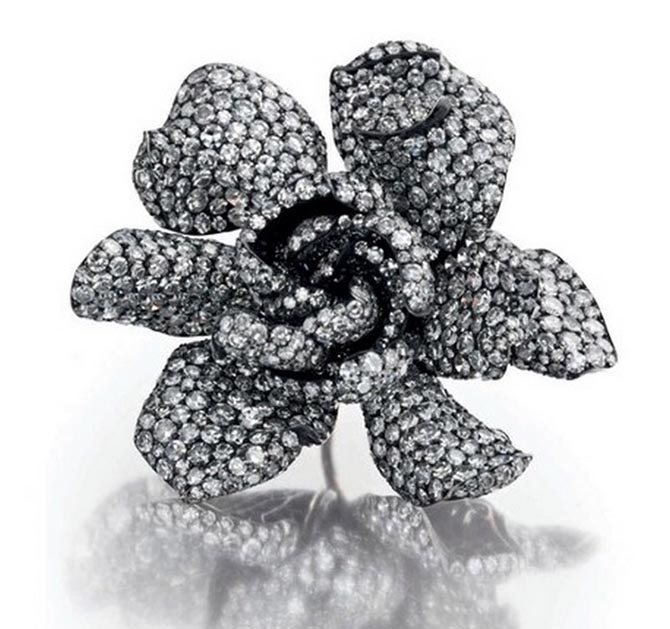 As the years have passed, the legend of the Barkin jewels has only grown. In 2008 the Sex and The City movie included a scene inspired by the auction. Samantha (Kim Cattrall) invites all the girls to join her at Christie’s when she bids on a flower ring from the sale of a divorcée who was (yes) thrown out her townhouse by her ex-husband. While all the jewels can be viewed online, the rare print catalogue showing pictures of Barkin in her pieces has become a collector’s item. It will set you back anywhere from $473 to $575 for a pristine copy available on 1st Dibs.

Very few of the pieces from the sale have been resold publicly in the last eleven years which is remarkable, because the market for JAR jewels at auction is as hot as can be. He is the one contemporary jewelry designer who sells for higher prices at auction than at retail. I think few buyers from the original Barkin sale have cashed in because the jewels were incredibly wearable. They were not objects just to be admired. Barkin’s JAR jewels were easy to wear designs that went out on the town and probably still do. Actress and jewelry collector Jennifer Tilley has been spotted wearing the JAR shoulder dusters she picked up at the sale. Find out more about Barkin’s style and her collection in this Christie’s promotional video.  The memories will flood back. 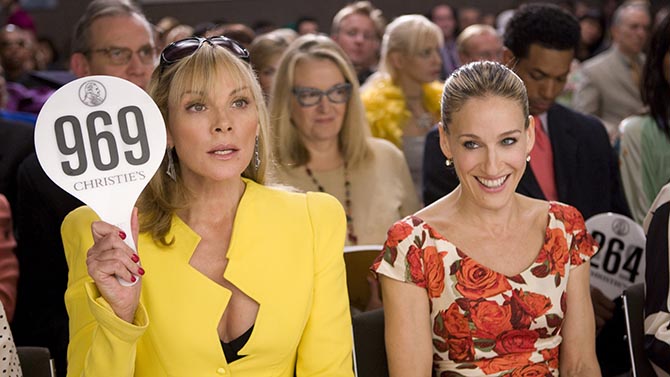 Sarah Jessica Parker with Kim Cattrall who is bidding on a flower ring from a divorcee’s collection at Christie’s in the ‘Sex and the City’ movie. Photo New Line Cinema/Warner Bros. Pictures