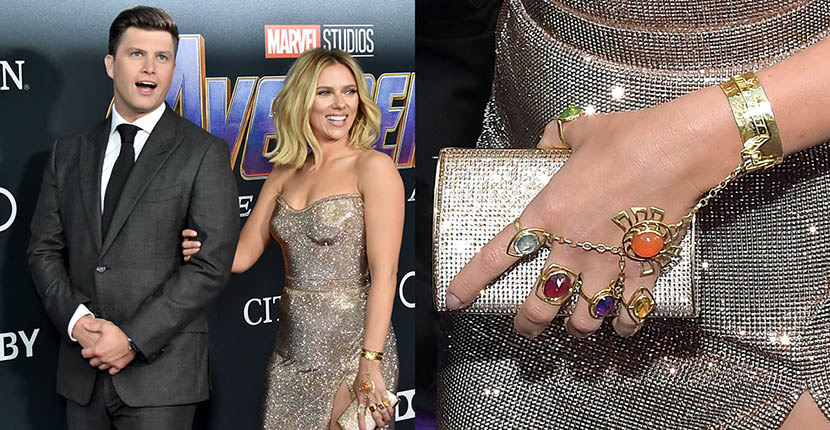 Colin Jost wanted to give Scarlett Johansson something really special to celebrate Avengers: Endgame. The SNL star envisioned a jewel inspired by the Thanos Gauntlet set with the Infinity Stones from the Marvel films and he knew just where to get it. He went to Scarlett’s good friend, jewelry designer Sonia Boyajian, and commissioned the piece three months in advance of the world premiere. (If you need a refresher or introduction on the significance of the gems check out Everything You Need to Know About Marvel’s Infinity Stones Before You See The Avengers: Endgame.)

“Colin, being a comedian, when he asked me to make something inspired by the Thanos glove, it was almost like being on a SNL sketch,” remembers Sonia. “He was very funny.” But the Los Angeles based designer got down to the serious business of creating the piece for the Black Widow right away. She showed Colin several sketches for approval of a design the actress could wear in different ways.

“Scarlett is a true jewelry lover,” explains Sonia who has been friends with the actress for around 15-years. “She enjoys seeing jewelry and is very knowledgeable. Sometimes she even comes with me downtown when I am running errands in the jewelry district to check things out.” 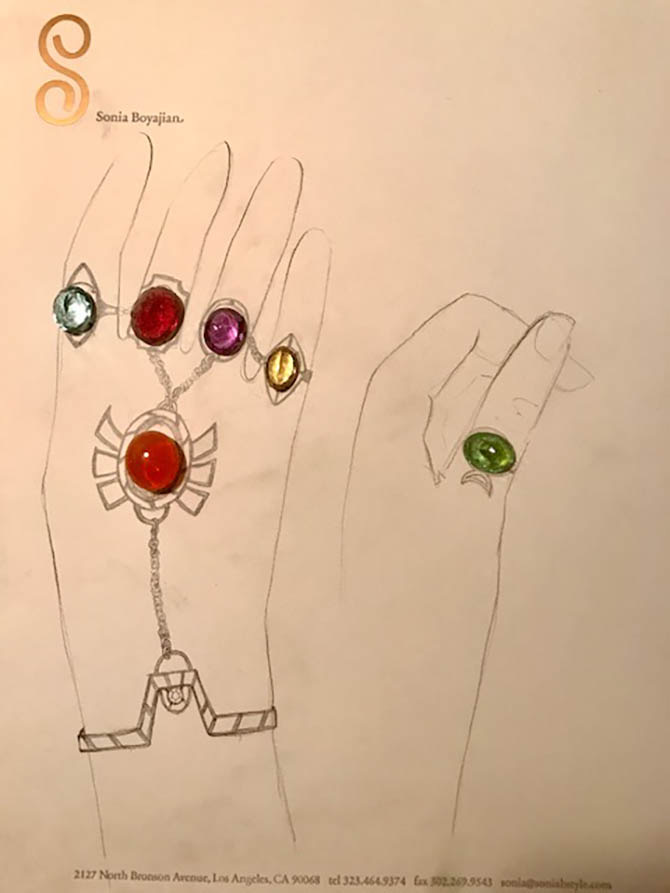 For the special jewel, the designer followed the lines of the Infinity Gauntlet and the placement of the stones by making five 18k gold rings and a bracelet that anchored the gem on her hand with chains. “The centerpiece on her hand can be detached and worn as a pendant,” explains Sonia.  The gems in the rings are aquamarine, pink and green tourmalines, amethyst and a citrine. The center gem is a Mexican Fire Opal. Sonia set the stones upside down so the base of the gems would give a rough appearance like the ones in the Infinity Gauntlet.

When the jewel was complete, Sonia told Colin if she is going to wear it on the red carpet we need to do a fitting. So they presented it to Scarlett together in Sonia’s studio. “She was totally stunned and it was totally unexpected.,” remembers Sonia. “She put it on went in the light, took pictures, really loved it.”

When Brie Larson aka Captain Marvel also turned up at the Avengers: Endgame premiere in a specially commissioned jewel inspired by the Thanos Glove and Infinity Stones, it was a complete surprise to Sonia. “I was actually happy to know that I wasn’t the only person making the Glove of Thanos,” says Sonia.