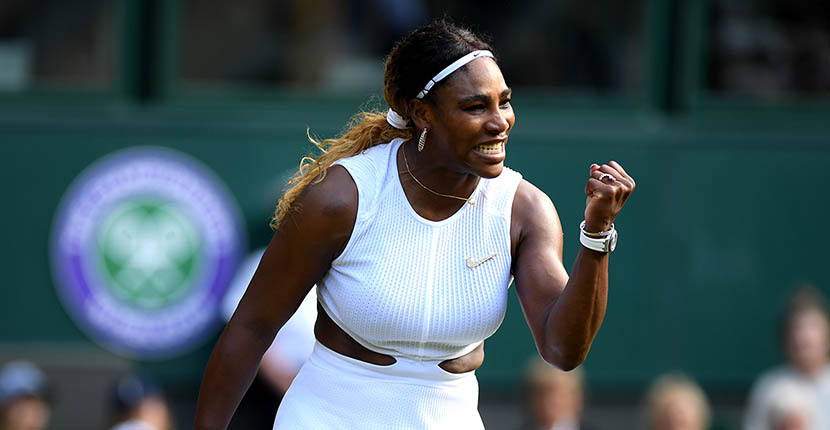 Serena Williams playing at Wimbledon in her Nike ensemble accented with a Broosh, diamond jewels and her Audemars Piguet Royal Oak. Photo Getty

Serena Williams is known for the fashion statements she makes on the court. There was the controversial catsuit at last year’s Roland Garros championships in Paris that was super sleek and in fact designed for therapeutic compression to fight against a possible blood clot. At the 2018 US Open, the tennis superstar went ultra girlie and played in the sweltering heat wearing a black tutu designed by Virgil Abloh for Nike x Off White. She returned to Virgil again at this year’s Roland Garros in a ensemble printed with the words in French and English for “Mother,” “Goddess,” “Queen” and “Champion.”

Among all the star’s recent eye-catching looks, however, none have been quite as well accessorized as her outfit for this year’s Wimbledon. Serena stepped on the court on July 2, 2019, to play her first round against the Italian qualifier Giulia Gatto-Monticone in a white knitted dress with cutouts at the waist and the Nike Swoosh embellished with 34 Swarovski crystals. 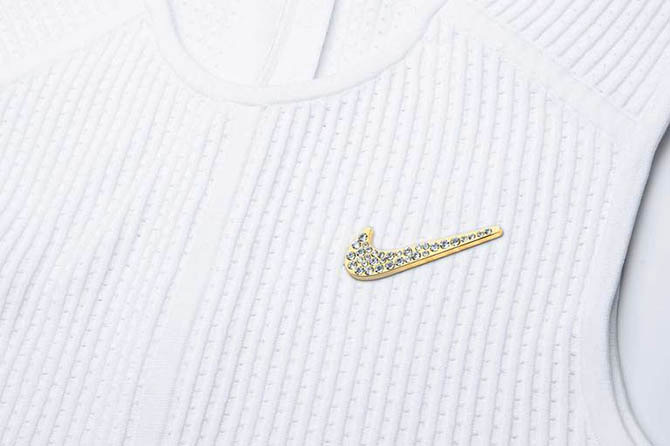 The number of faux gems represented Serena’s age the last time she won the Wimbledon championship in 2016. It was dubbed Broosh by the marketing team at Nike. A word that combines Brooch and Swoosh. “I also wanted her to feel like it was something her grandmother could have worn, but of course give it a modern spin and make it just right for Serena,” says Abby Swancutt, Global Design Director for Nike Court.

What went largely overlooked by the audience focusing on Nike’s famous logo was the rest of the jewelry Serena put on for the match. I have long been fascinated by athlete’s ability to play in big jewels. I personally can’t focus on a long story sitting at my computer in much more than studs and a bracelet. Serena managed the treasures with ease. For starters, she had on big lacey diamond and gold hoops. 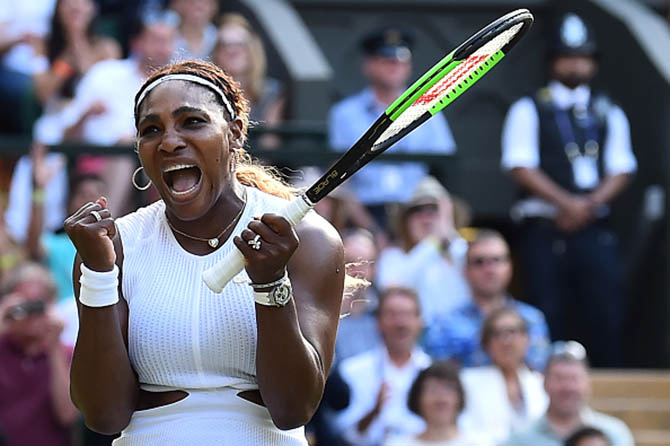 Serena Williams celebrating a point at Wimbledon in an image that shows all the jewelry she sported for the event. Photo Getty

Serena’s well-document love of jewelry with heart motifs was shown off in a major way. She wore a large diamond heart-shaped pendant choker necklace. It was hard to get a really good look at it because of all the action, but the single stone or multiple gems in the jewel looked to be pretty substantial.

On her wrist she sported a massive Audemars Piguet Royal Oak Offshore Self Winding Chronograph on a white rubber strap. An ambassador of the watch brand, she had on a similar timepiece for her recently launched Wheaties cereal box cover. She paired the timepiece with a bangle bracelet that appeared to be studded with emeralds. 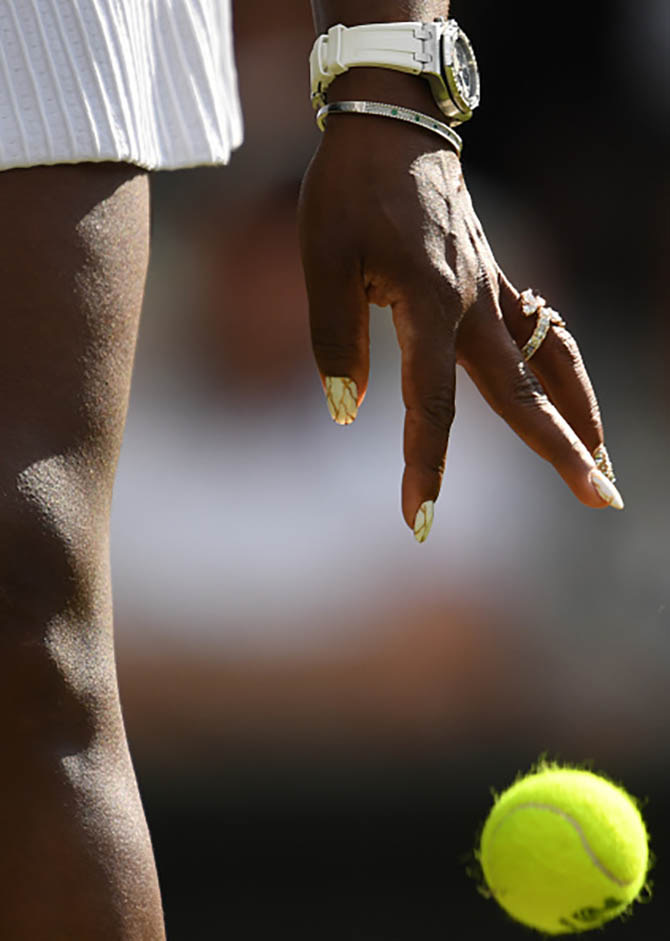 Detail of Serena Williams’s left had showing her Audemars Piguet Royal Oak, a bracelet and her wedding band. Photo Getty

On Serena’s right hand there was a wide diamond band. On the third finger of her left-hand she had on her giant wedding band that sparkled plenty. The V-shape jewel set with large diamonds was most likely custom made to nestle her massive oval-shaped diamond engagement ring from her husband Reddit founder Alexis Ohanian. Serena finished off the look on her hands with a manicure that included elaborate gold crackle overlay and rhinestone studded nail. 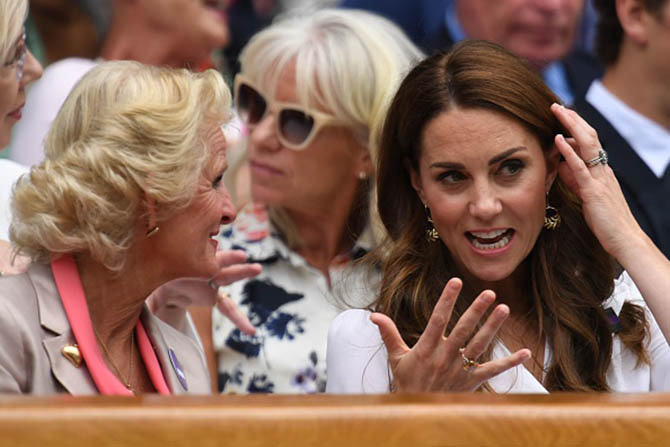 Add it all up and it was a lot of jewelry. By comparison, Serena was wearing more jewelry than Kate Middleton wore in the Royal Box on the same day at Wimbledon. According to the experts at What Kate Wore, the Duchess of Cambridge sported dainty gold circular earrings with a fern motif by Catherine Zoraida and a citrine cocktail ring as well as her engagement ring. Nice, but not really the level of the Queen of the Court.