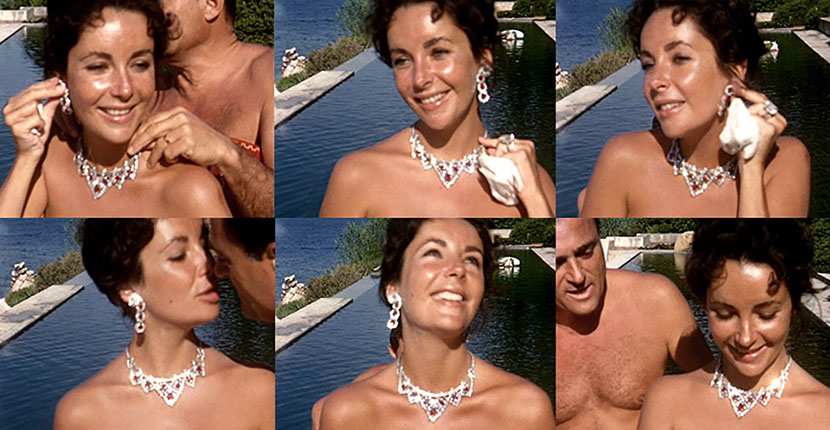 Elizabeth Taylor greeted every jewelry gift—large and small—with enormous enthusiasm. I have heard anecdotes from people who presented her with pieces on the smaller side about her pure joy. The actress’s friend, author Dominick Dunne, marveled in a story for Vanity Fair at the way she received a sweet jewel he had given her.

When it came to larger gifts, Taylor wrote about her reaction to some pieces in her 2011 autobiography My Love Affair With Jewelry. After she opened a Christmas present from Richard Burton in 1968 and found the 8.25-carat Puertas Ruby, diamond and platinum ring by Van Cleef & Arpels, she said, “I screamed, which probably echoed over the mountains, and I couldn’t stop screaming. I knew I was staring at the most exquisite ruby anyone had ever seen.” 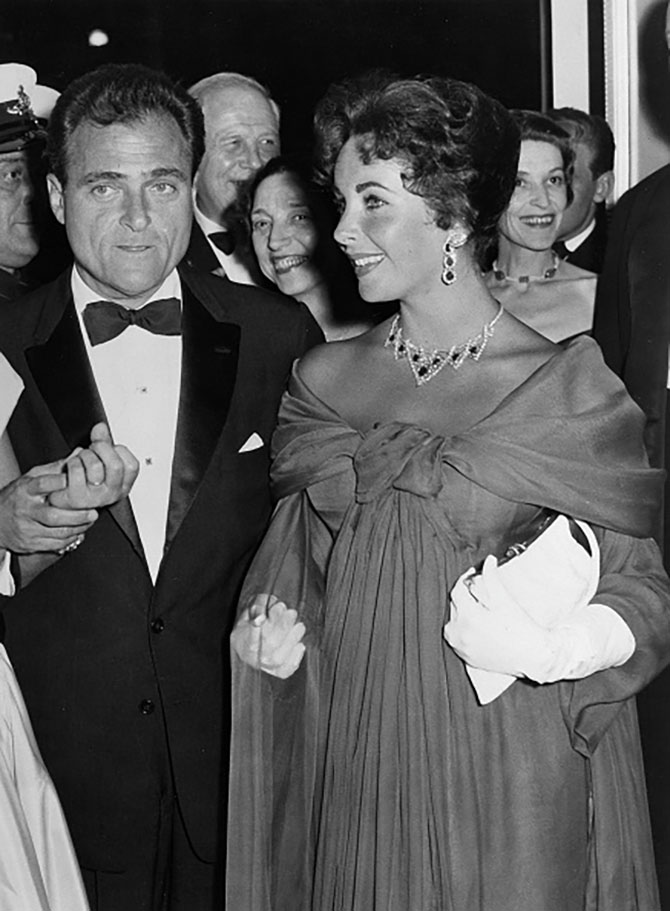 Mike Todd with Elizabeth Taylor who is pregnant and wearing a Dior gown and the Cartier ruby and diamond earrings and necklace at a premiere of ‘Around the World in 80 Days.’ Photo by Ullstein Bild via Getty Images

The outspoken actress told New York Times columnist Alex Kuczynski in an interview about her book, when Burton gave her jewelry, “I would get so excited, I would jump on top of him and practically make love to him in Bulgari.”

Among all the many joyful experiences Elizabeth Taylor had receiving jewelry only one was recorded on film. A friend had a camera rolling for about 20-seconds of silent footage when Mike Todd presented her with a ruby and diamond necklace, earrings and bracelet from Cartier while they were on vacation in August, 1957 at the Villa Fiorentina located at the tip of Saint Jean Cap Ferrat in the Cote d’Azur.  (Film stills of the short movie are above. The clip is below and, yes that is Eddie Fisher in the pool.)

Since Taylor was pregnant with Liza Todd, the couple’s only child, when she received the jewels, some have hypothesized that the pieces might have been an early push present. It’s more likely the jewels were simply tokens of affection. Taylor’s radiance at the moment she put on the rubies in the little snippet of film instantly added a layer of movie star magic to the mid-century designs.  Over time the jewels have become emblems of the couple’s short intense love story.

Elizabeth Taylor’s Cartier Burma ruby and diamond, platinum and gold, earrings and bracelet to be sold at Christie’s in Geneva on May 18, 2017 Photo courtesy

It was the third marriage for each of them and it was a true romance accented with extraordinary jewelry. The flamboyant 47-year old movie producer first presented his 24 year-old bride with an incredible 29.5-carat diamond and platinum engagement ring, she referred to as her “ice skating rink.”  He gave her a vintage diamond tiara to wear to the Oscars in 1957.  She also put on the piece for the Cannes Film Festival the same year. Todd had the costume chandelier earrings he bought for her in Paris remade in diamonds and platinum back in the States. There were the rubies from Cartier among several other things. 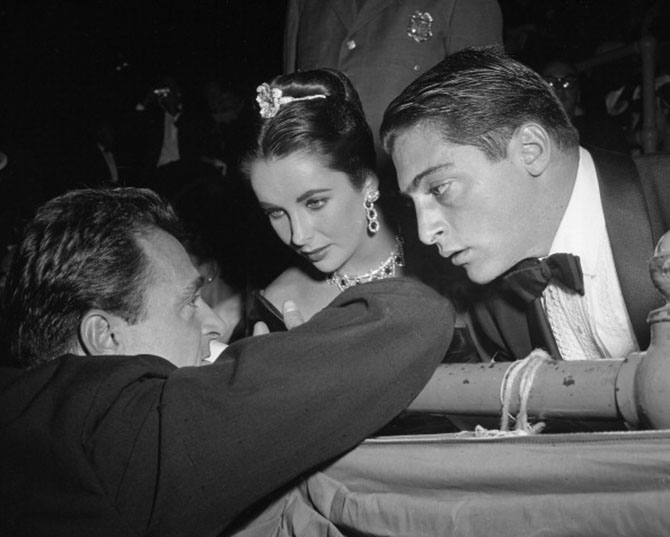 At a premiere for ‘Around the World in 80 Days’ at Madison Square Garden in New York, Mike Todd chats with his son from a previous marriage, Mike Jr. and Elizabeth Taylor who is wearing the Cartier ruby and diamond earrings and necklace as well as a diamond flower brooch in her hair. Photo Hal Mathewson via Getty Images

It would be an unbelievable amount of jewelry, except there are lots of pictures of Taylor wearing it with Todd during the couple’s whirlwind promotions of his Oscar winning film Around the World in 80 Days and other events.  When you consider the fact the couple was only married for thirteen months the number of important jewels Todd gave Taylor is truly astonishing. Todd was killed in a plane crash on March 22, 1958. 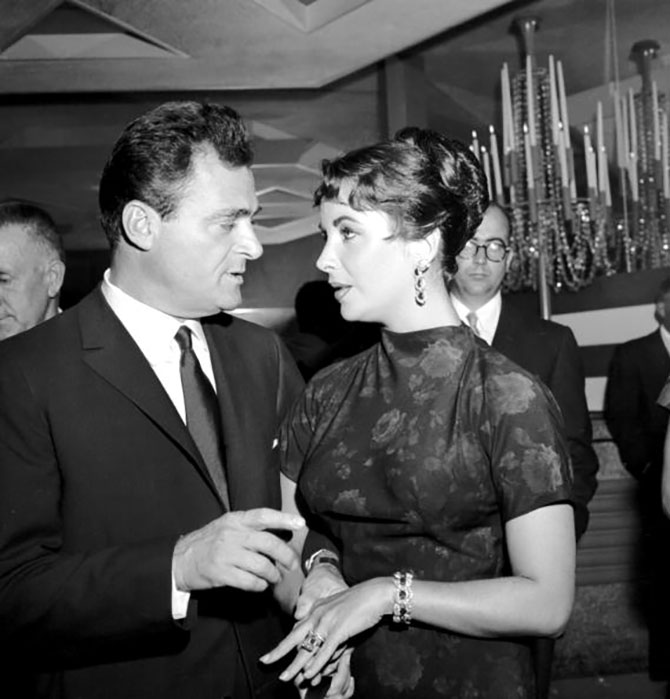 At a 1957 party in Los Angeles, Mike Todd chats with Elizabeth Taylor who is wearing the Cartier ruby and diamond earrings and bracelet. Her 29.5-carat diamond engagement ring is shining on her finger. Photo by Michael Ochs Archives/Getty Images

When the ruby jewels were sold individually at Elizabeth Taylor’s Christie’s estate auction in 2011, the enthusiastic bidding proved the pieces were considered among the most iconic and important in the collection. The Cartier Collection walked away with the necklace for $3,778,500. The earrings and bracelet sold to a private buyer for $782,500 and $842,500 respectively.

Now the earrings and bracelet are on the market again.  The demi suite is being sold at Christie’s in Geneva on May 17.  The estimate for the earrings is around $300,000 – $500,00 and the bracelet is $400,000 – $600,000.  While I suspect the Cartier Collection might be in on the bidding for the historic jewels, there may also be a few romantics who want to make a woman wildly happy with an extravagant gift.

Why the Taylor-Burton Diamond is Known As the Cartier Diamond