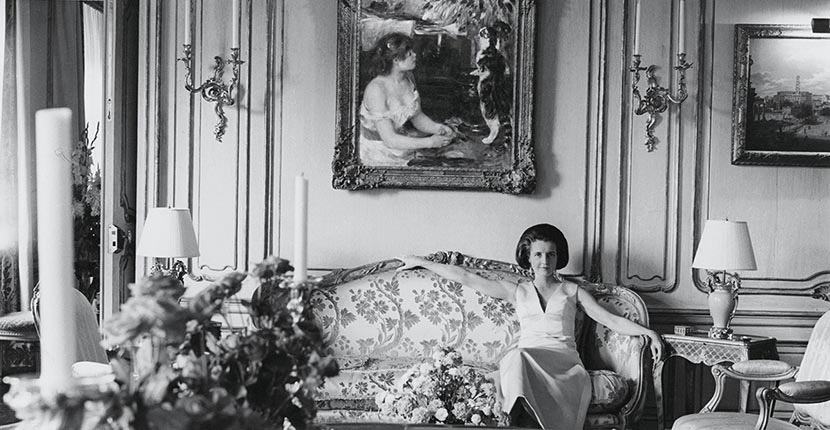 Jayne Wrightsman wearing a satin gown by Givenchy sitting on a Louis XV sofa under Renoir's Girl with Cat in a 1966 image taken by Cecil Beaton for Vogue at her New York apartment. Photo by Cecil Beaton/Condé Nast via Getty Images

A Look at Jayne Wrightsman’s Jewelry

The celebrated art collector had a jewel box filled with treasures

The life of Jayne Wrightsman, who died on Sunday, April 20, 2019 at age 99, was celebrated in obituaries filled with superlatives about the masterpieces she and her oil tycoon husband, Charles B. Wrightsman, donated to museums around the world.  The New York Times story said, “While she was not well known to the public — a status she preferred — Mrs. Wrightsman was arguably the most important patron in the modern history of the Met, and was a great patron of the British Museum, the Louvre and the Hermitage in St. Petersburg, Russia, as well.”

The Wrightsmans were also famous for their homes and the 18th and 19th century furniture collection they accumulated and donated to the Met. It filled 13 period rooms at the museum. Mrs. Wrightsman’s knowledge about French décor was so comprehensive when her friend Jackie Kennedy was renovating the White House in 1961, she consulted with her frequently.

In jewelry circles, it was common knowledge that Mrs. Wrightsman had a spectacular collection of treasures. What exactly she had, of course, was not known. The doyenne was rarely photographed and her jewelry was not seen by the public. She posed twice during the 1950s for Vogue portraits shot by famed lensman Horst P. Horst, but the images were really more about her spectacular couture and amazing homes. She was snapped in Palm Beach with Jackie Kennedy wearing a brooch that looks like her diamond and platinum corsage ornament (seen below). When Cecil Beaton shot her for the fashion magazine in 1963, he did manage to get Mrs. Wrightsman’s gigantic marquise-diamond engagement ring and a pair of pendant earrings in the picture. In 1989 when Mrs. Wrightsman was attending Carolyne Roehm’s fashion show, she was photographed in a gold necklace with five giant emerald beads by the celebrated paparazzi Ron Galella who knew all the socialites. 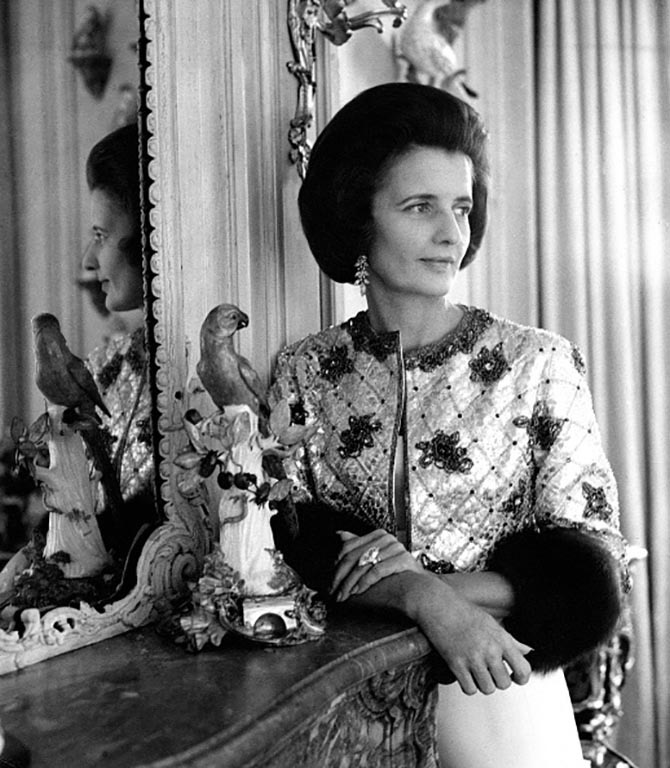 In 2012, a lot of the mysteries surrounding Mrs. Wrightsman jewelry were solved when she sold 63 pieces from her collection at Sotheby’s in New York. The emerald bead necklace was revealed to be by Bulgari. While for Mrs. Wrightsman the stunner was a daytime jewel she tossed on for a fashion show, it was museum quality and the Bulgari Archive Collection bought it for a cool $566,500. It’s worth nothing the high estimate on the piece was $75,000. Other treasures included a stunning bow brooch that once belonged to the Duchess of Kent. She also had a handful of Verdura. There were a few jewels by JAR and lots of breathtaking vintage pieces. 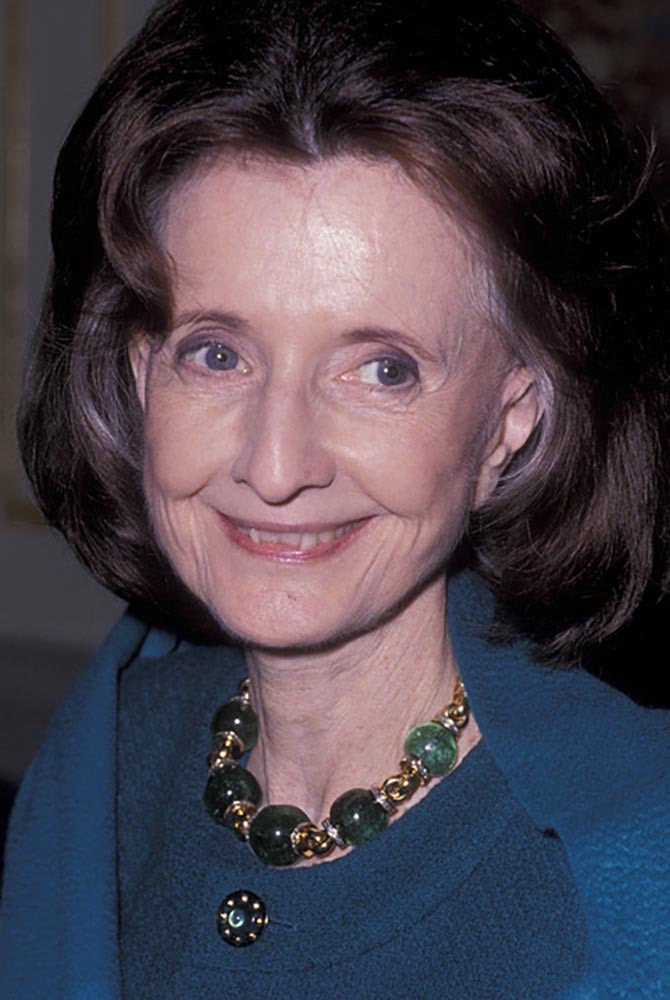 Mrs. Wrightsman’s jewels sold at Sotheby’s were all incredibly elegant and beautifully chosen and look as wearable for her as the Bulgari emeralds. She didn’t accumulate, say tiaras, to wear at home during her dinners like some American socialites during the mid-20th century. She had brooches like the women of her generation, but not too many. Instead her collection is filled with necklaces, earrings and rings. The jewels reflect the kind of glamour that landed the doyenne on the International Best Dressed List Hall of Fame way back in 1965.

When the jewels went on the auction block at Sotheby’s during an evening sale on December 2, 2012, the collection sold for a total of $15,541,188. See highlights below.  While 63 is a large number, I suspect Mrs. Wrightsman had more jewelry in her collection. It is possible she bequeathed pieces to friends or family. It is also possible it could appear at Sotheby’s at some point in the future. 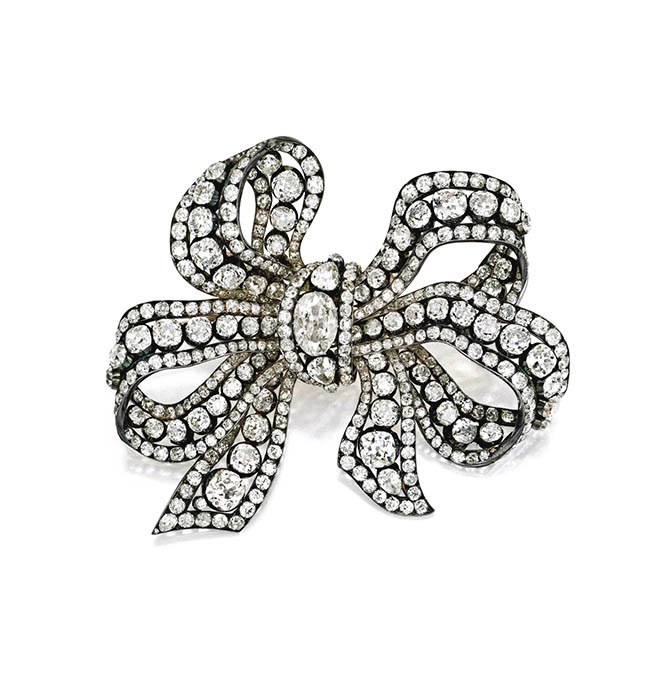 Jayne Wrightsman’s silver topped bow brooch made around 1850 that once belonged to Princess Marina the Duchess of Kent and originally came from a Russia Royal Family collection. Photo Sotheby’s

The headliner in Mrs. Wrightsman’s 2012 jewelry sale was her antique diamond bow brooch. Made around 1850 in a classic style of the period, the jewel is set with over 100-carats of diamond and originally belonged to Russian royals. The Grand Duchess Elena Vladimirovna was photographed wearing it around 1902. In 1934, the jewel was given to Princess Marina when she married Prince George, Duke of Kent and became known as the Duchess of Kent. The royal wore the piece in any number of photographs. Eventually her heirs sold the bow and it was acquired by Mrs. Wrightsman. In 2012 at Sotheby’s, the jewel was sold for $842,500 . 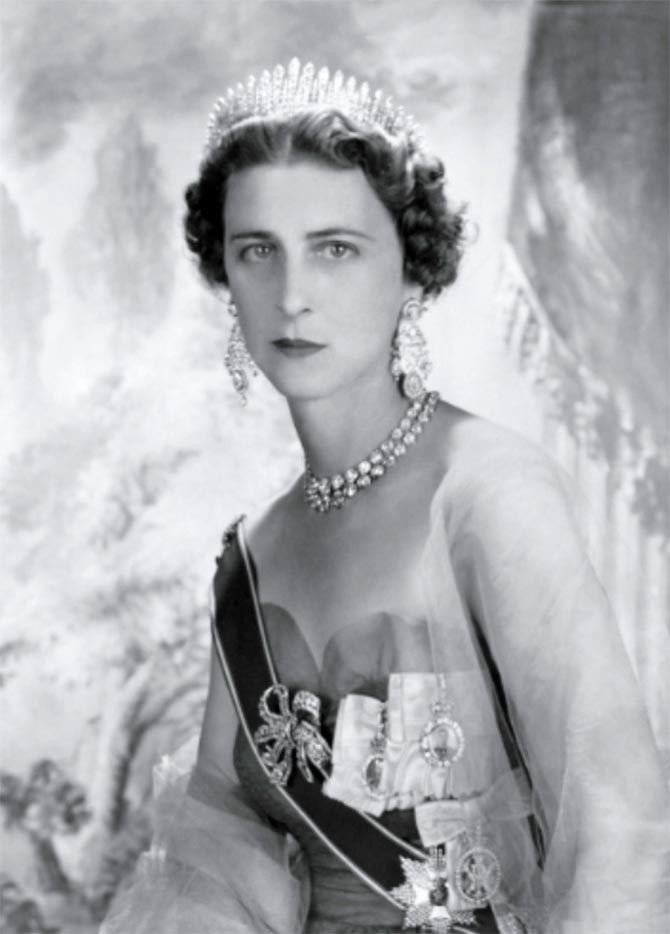 Princess Marina, the Duchess of Kent wearing her bow brooch. Photo via

Princess Marina, the Duchess of Kent wore the bow brooch acquired by Mrs. Wrightsman on any number of occasions throughout her life. She often paired it with her dazzling girandole earrings. 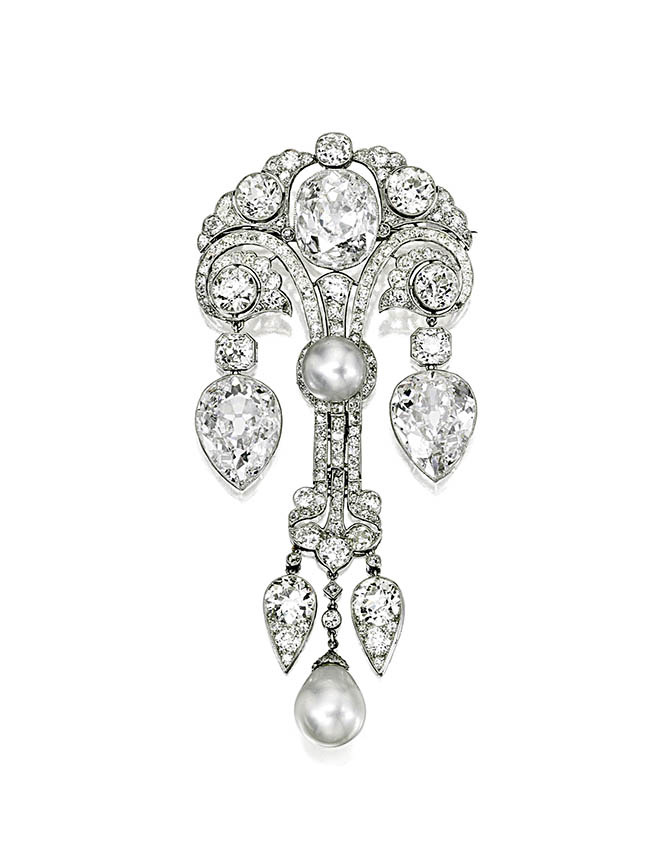 Jayne Wrightman’s Magnificent platinum, diamond and natural pearl brooch was made around 1910.

While the bow brooch had the most glamorous history of any piece in Mrs. Wrightsman’s collection her platinum, diamond and natural pearl brooch was the top selling lot at Sotheby’s. It went for $2,042,500. The auction house described the jewel as follows: “Of Oriental inspiration, centered by a button-shaped natural pearl measuring 10.79 by 10.63 mm, surmounted by a cushion-cut diamond weighing 8.67 carats and flanked by two pear-shaped diamond drops weighing 9.59 carats and 8.78 carats, completed by a natural pearl drop measuring 11.88 by 11.69 mm, accented throughout by numerous old European, old mine and rose-cut diamonds weighing approximately 19.50 carats, length approximately 4 inches.” Mrs. Wrightsman purchased the jewel from the Magnificent Jewellery auction at Christie’s in London on June 20, 1990. 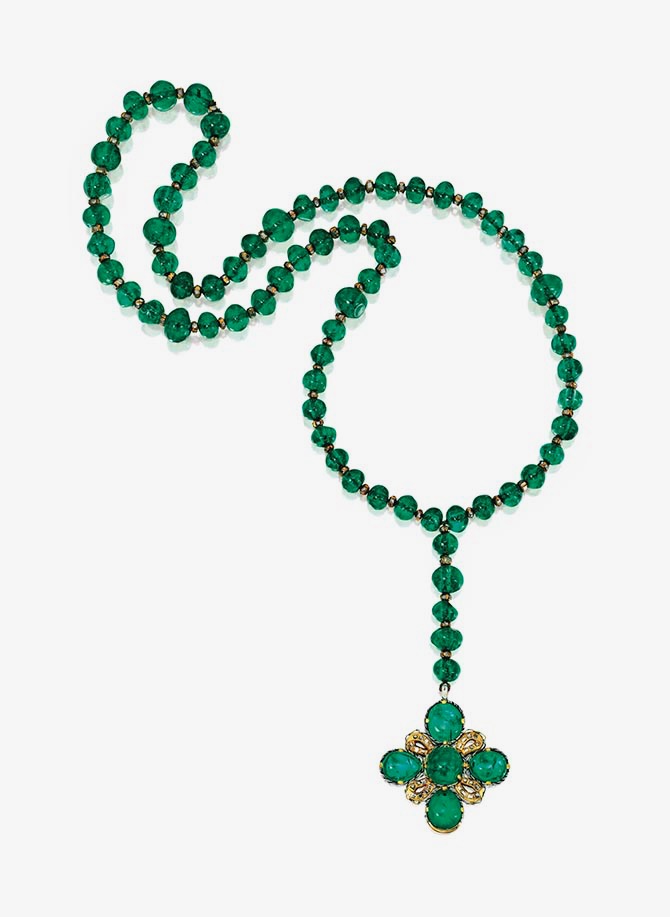 The rosary in Mrs. Wrightsman’s collection dates from the late 17th century and once belonged to the Saxon Royal Family. It is set with 70 Colombian emerald beads interspersed by gold rondelles set with table cut diamonds suspending a pendant set with five double-cabochon emeralds and numerous table-cut diamonds, within gold surrounds applied with black and white enamel. In its original form the 17-inch long necklace suspended an emerald pendant carved with the Annuncation. The jewel sold at Sotheby’s for $842,500. 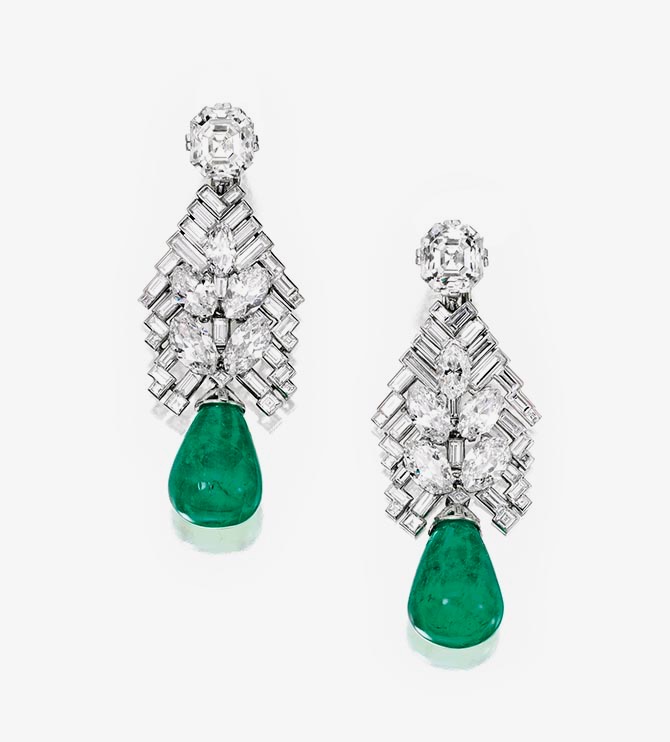 Jayne Wrightsman’s pendant earrings made by Cartier London around 1935 are packed with an array of baguette, square and marquise shaped diamonds weighing a total of 11.25-carats. The diamonds at the top of the jewel are one emerald-cut diamond weighing 4.78 carats and one cut-cornered rectangular step-cut diamond weighing 4.77 carats. The emeralds at the bottom of the jewel weigh a total of 50.30-carats. The earrings sold for $578,500 at Sotheby’s in 2012. 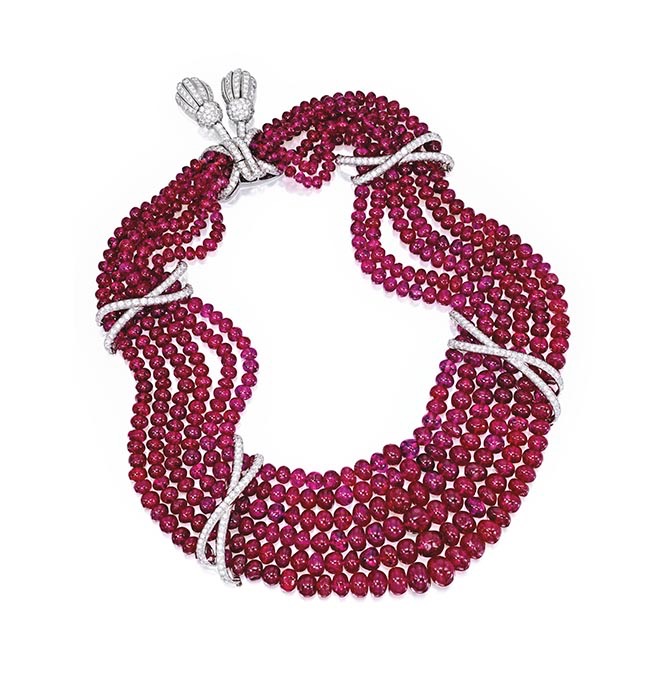 There were 12 pieces by Verdura in Mrs. Wrightman’s collection sold at Sotheby’s. Far and away, it was the largest amount from any single jeweler. Among the stunning array was the six-strand ruby necklace with X motifs and tassels as the clasp composed of diamonds and rubies. The piece sold for $206,500. 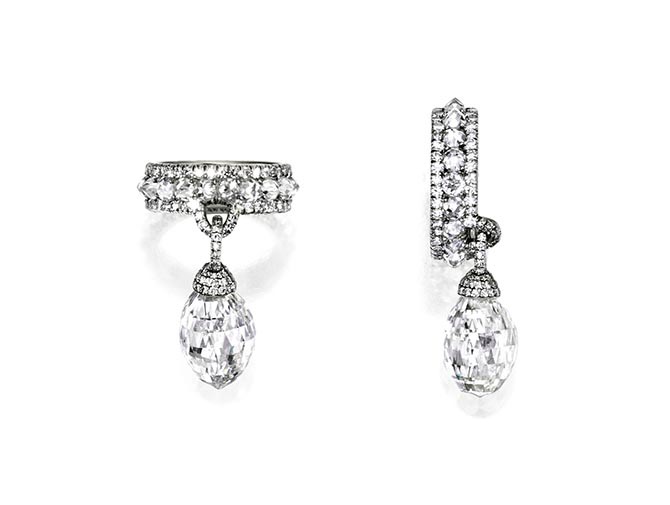 There were five pieces of jewelry by JAR in Mrs. Wrightman’s collection. She did not have a signature butterfly or any huge JAR jewels. Instead she chose pieces with movement and a dash of whimsy like the charm rings. The 10.28-carat briolette set on a blackened band of rose and single cut diamonds was a size 3-1/4. In other words it was a pinky ring. The piece sold for $566,500 at Sotheby’s. 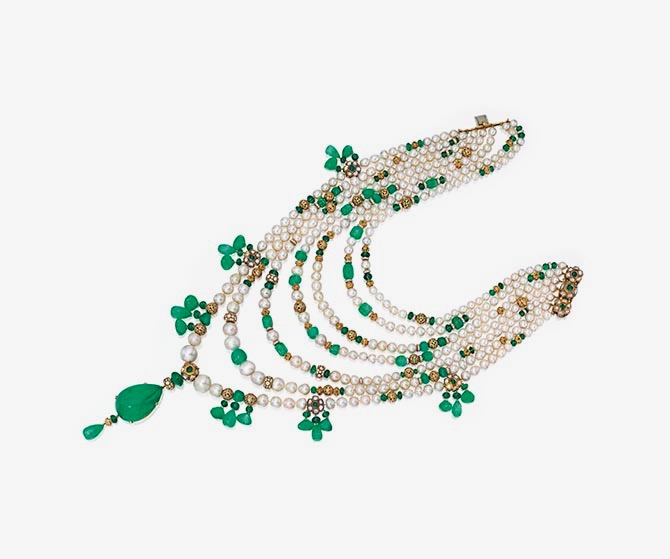 The biggest statement piece in Mrs. Wrightsman’s collection was a multi-strand natural pearl, emerald and diamond necklace. It is not known who made the piece. The design is inspired by traditional Indian jewels. There is a major cool factor with the jewel that really exemplifies Mrs. Wrightsman’s style. The necklace sold for $518,500 at Sotheby’s.