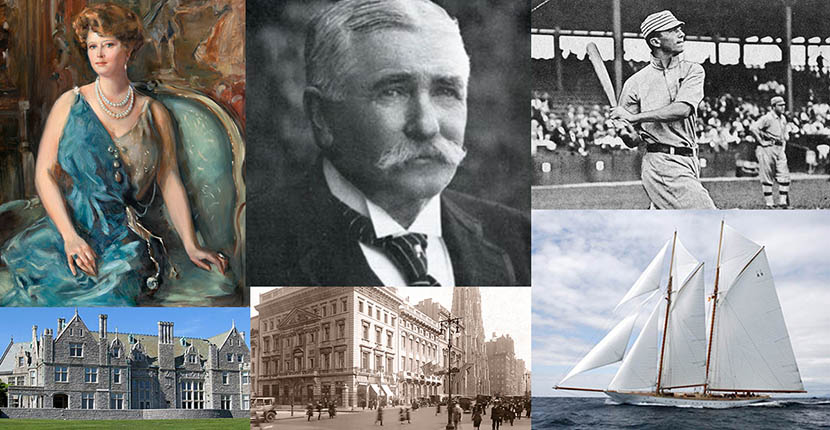 The Man Who Bartered His Mansion for Pearls

There have been a lot of legendary New York City real estate deals, but none quite like the transaction between Pierre Cartier and Morton Plant.  It all happened in 1917 when Plant put his Fifth Avenue home on the market.  At the same time, Pierre Cartier was on the hunt for a flagship in the Big Apple.  Once he saw the Plant home, the visionary jeweler could imagine just how it would be transformed into the House of Cartier.

Pierre Cartier suggested a barter when Plant’s beautiful young wife Maisie became enchanted with a double strand of natural pearls.  The jewel was around the same price—a million dollars—as the piece of real estate.  Plant loved making his wife happy and agreed to the swap.  At the heart of the story is a glorious romantic gift that truly begs the question—who was this man that traded his home for a jewel for his wife? 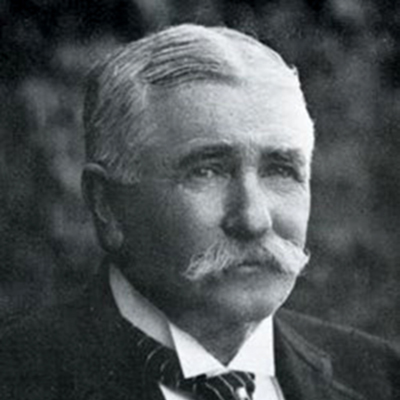 Morton Freeman Plant was born on August 18, 1852 in Branford, Connecticut.  He was the son of a railroad and shipping magnate.  During his lifetime, he displayed dazzling business acumen and more than doubled his significant inheritance.  Personally, Plant was known for grand gestures, high-spirited sportsmanship, astonishing luxuries and a deep sense of noblesse oblige.  In the context of his life story, the extraordinary real estate deal of pearls for a mansion is right in line with Plant’s enterprising, swashbuckling and endearing character.

Baseball was one of Plant’s many passions.  He co-owned a major league team based in Philadelphia and founded a minor league team named the Planters in Connecticut.  Despite the fact that it was the minors, athletes liked being on the team because Plant paid them better than the major leaguers.

One of Plant’s most well-known acts of philanthropy intertwined with his enthusiasm for baseball.  A great believer in the importance of education, Plant was on the founding board of Connecticut College in New London.  To quickly wrap up a long meeting that was going to make him late for a Planters game, he threw down a one million dollar unrestricted donation for the College.  The gift is still fondly remembered at the college as part of its establishment funds. 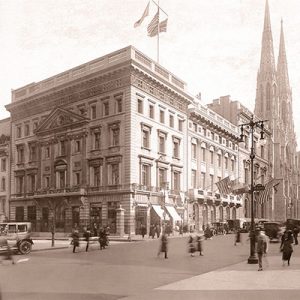 Morton Plant’s home on Fifth Avenue in New York City may have been situated on Millionaire’s Row of mansions, alongside the Vanderbilts and near the Astors, but he had no interest in being a part of the society scene.  Plant’s summer house was not in fashionable Newport.  It was in the rural area of Groton, Connecticut.  Yet, he built his country seat in a magnificent style.

Plant used the same English architect, Robert W. Gibson, who designed his Fifth Avenue mansion.  The magnificent home included 31-rooms, a few two-story high fireplaces, a grand staircase and imported Italian marble features.  European craftsmen carved the wood paneled walls.  A music room was imported in its entirety from an estate in Cornwall, England.  There were a couple of greenhouses that produced award winning specimens at botanical shows. 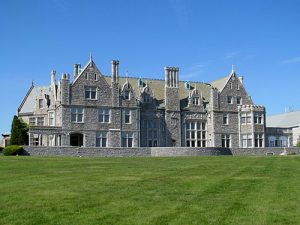 It has been estimated, Plant paid around $3-million for the 1903 construction of the house situated on a bluff with panoramic views overlooking Fisher Island and the Long Island Sound.  The money was well spent.  Branford House, named after Plant’s hometown, is still standing.  Today, it is the property of the University of Connecticut and used for special events.

Plant was a good neighbor in Connecticut.  Beyond providing the entertainment of the baseball team and generously contributing to Connecticut College, he donated funds to build roads in the area and financed the building of a local Chamber of Commerce.  There were also small acts of kindness.  Once when he drove by a church that needed a paint job, Plant stopped, left his card and told the administrator to send the bill for the work to his house. 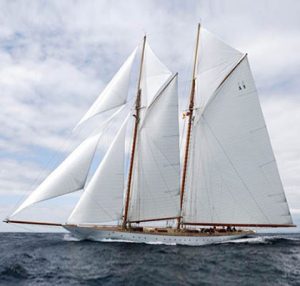 The modern recreation of Morton Plant’s schooner the Elena

Morton Plant is often referred to as the Commodore because he was an avid yachtsman.  His love for the sport began at the age of 13 with a cat-rigged sailboat.  Over his lifetime, he built up a fleet of steam yachts, power boats, sloops and schooners.  When the Commodore commissioned his most well-known boat, the Elena, he gave the famed designer Nathanael Herreshoff, a simple design brief.  In his bold way he said, “Build me a schooner that can win!”  The boat did win several prestigious races and became world famous.  In 2009, a recreation of the Elena was made using hundreds of Herreshoff’s drawings housed at the Massachusetts Institute of Technology (MIT).  Today, it sails as a charter.

Perhaps the most poignant part of Plant’s legacy can be found in Clearwater, Florida.  In 1916, Plant was vacationing in the area with his family at the Belleview Biltmore, a hotel established by his father as a luxurious destination stop on the Plant system of railroads.  During the trip, Plant’s young son was injured in a car accident.  Since there was no hospital in the vicinity, Plant had a team of doctors and a medical unit sent down on the train.  For months the physicians were set up in the makeshift hospital rail car parked next to the hotel to nurse his son back to health.

After the episode Plant pledged money to build a hospital in Clearwater.  The city came up with the remaining funds.  Today, the Morton Plant Hospital is a major facility and designated as one of Reuters top 100 Hospitals in the United States.  The century-old care center has remained non-for-profit since the day it opened its doors in 1916.

One year after Morton Plant traded his New York home for Cartier pearls and moved into an even larger spread at 1051 Fifth Avenue, he passed away at 66 years old due to complications from a pneumonia.  He has been remembered up and down the eastern seaboard in ways that align nicely with his passions in life.  It’s a certainty Morton Plant would be delighted his donations were meaningful to Connecticut College.  He would surely be happy to know Branford House was still standing.  Undoubtedly, he would be thrilled that his schooner Elena had been gloriously reconstructed and was sailing the seas.  Clearly, he would be overjoyed that the Morton Plant Hospital in Florida was doing such good works.  And there is no doubt Morton Plant would be pleased his Fifth Avenue home, the last remaining mansion on Millionaire’s Row in New York City, was being beautifully taken care of by Cartier.