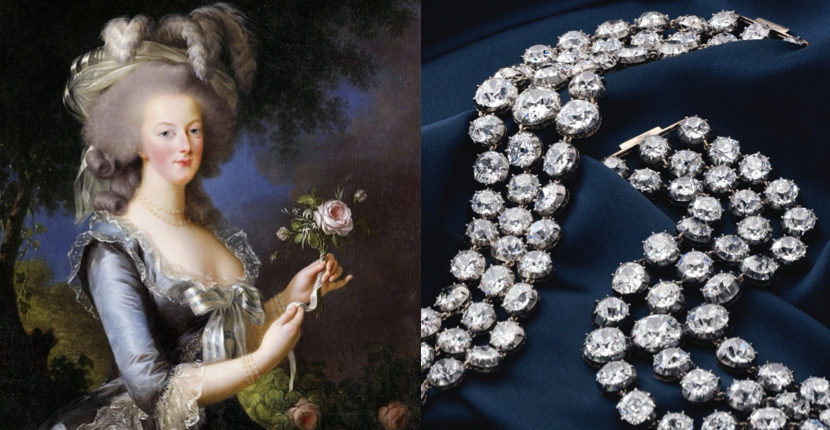 September 30, 2021—There is a montage in Sofia Coppola’s 2006 film Marie Antoinette where the French Queen’s ladies in waiting dress her every morning. It is one of many moments in the movie that illustrates how everything, down to assistance in putting on lingerie, was done for Marie Antoinette.

I always think of this scene when I read about how Marie Antoinette herself spent an entire evening in the Tuileries Palace packing some of her own jewelry, shortly before the Revolution. She wrapped it in cotton and placed it in a wooden chest with her own two hands. Clearly the jewels meant a lot to her. (If you are wondering how we know the Queen did the packing, one of her ladies-in-waiting named Madame Campan wrote about it.)

Antoinette had the chest sent to the former Austrian ambassador to France, Count Mercy-Argenteau in March 1791. The Count had been a trusted friend and liaison between Marie Antoinette and her mother Empress Maria Theresa of Austria. You may recall in the Marie Antoinette movie the ambassador delivers the disapproving notes from Antoinette’s mother about her spending habits and behavior which send her into spirals of despair.

In real life, when Marie Antoinette’s only surviving child Marie-Thérèse de France, known as Madame Royale, was released from prison, the Count gave her the chest of jewels. Madame Royale, who did not have children, bequeathed the treasures to three members of the family.

Much to the jewelry loving world’s amazement, several of Marie Antoinette’s jewels were kept in the family for over 200-years. In 2018 when a large natural pear-shape pearl pendant with a bow motif from the collection packed in the trunk appeared at Sotheby’s, it shattered the world record price for a pearl selling for $36,165,090.

Now a pair of Marie Antoinette’s diamond bracelets from the famous chest of jewels are being sold at Christie’s in Geneva on November 9.

Find out more about them below. The historical research outlined here was unearthed by the legendary French jewelry historian Vincent Meylan who worked for three years proving the details of the provenance. Vincent’s eagerly awaited book The Queen’s Jewels: The legend of Marie Antoinette’s Diamonds will be published in French and English in 2022.

What are the details of the jewels?

They were made by Boehmer and are set with 112 diamonds weighing around 140 to 150-carats. The individual diamonds range from around 1 to 4 carats each. The largest gems are in the center of the jewels.

The old-cut gems are set in silver with yellow gold accents. The color of the gems ranges from G to J and the clarity of them is SI.

While most jewels in this style and of this period are closed in the back, these are open allowing the light to shine through the gems.

Who was the jeweler Boehmer?

In the Christie’s catalogue Vincent describes Charles Auguste Boehmer as a “German jeweler of French protestant background who had recently moved to Paris.”

Vincent has gathered the evidence that proves the jeweler made things Antoinette found irresistible. She bought some Boehmer diamond girandole earrings which were so expensive she had to pay for them on a layaway plan.

The same was true of the diamond bracelets being sold at Christie’s. They were very expensive and paid for over the course of six years. Initially, Marie Antoinette gave a down payment. She also gave Boehmer some of her gems. And Louis XVI had to give her some money for the jewels.

What did Marie Antoinette’s mother, Empress Maria Theresa of Austria, think of the purchase of the bracelets?

She did not approve. In a letter she wrote, “The news from Paris tells me that you have just performed a purchase of bracelets for 250,000 livres and to that effect, you have unsettled your finances.”

What was the link between the jeweler Boehmer and the French Revolution?

Even though Antoinette had nothing to do with the situation, the public thought she did and they turned against her. Historians believe the Affair of the Necklace hastened the French Revolution.

The situation surrounding the necklace has also been depicted as a major cause of the French Revolution in several films including the 1938 Marie Antoinette with Norma Shearer in the title role the studio dubbed “Madame of Devil May Care.” In the 2001 film, The Affair of the Necklace, the jewel was central to the plot but the movie, which starred Hilary Swank as jewel thief Jeanne St. Remy de Valois, bombed.

In the 2006 Marie Antoinette the Affair of the Necklace is alluded to when Ambassador Mercy (Steve Coogan) warns the Queen (Kirsten Dunst) about the troubles of the nation and her perceived insensitivity. She replies “Well there must be something we can do. Tell the court jeweler to stop sending diamonds.”

What is the Christie’s estimate for Marie Antoinette’s diamond bracelets?

The estimate on the jewels is $2.2 to $4.3 million but no one will be surprised if they sell for much, much more.

A Look at the Sparkle in ‘Marie Antoinette’

When and Why The French Sold the Crown Jewels