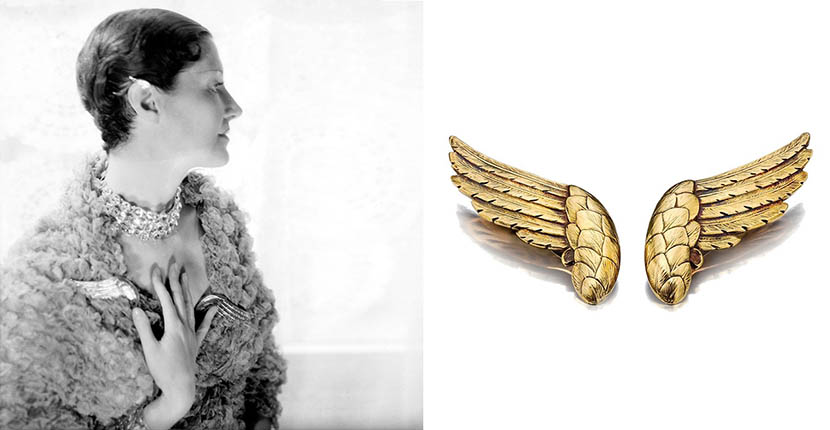 The brooches once belonged to style icon Daisy Fellowes

One of the most iconic jewels of all time, the Maltese Cross Cuffs, were designed by Duke Fulco di Verdura while he worked as the jewelry designer for Chanel during the 1930s.  Yet few other pieces the titled Italian created for the famous French fashion house during the almost eight years he worked there have ever surfaced publicly on the market.  When Chanel pieces do turn up that are believed to be designed by Verdura, it is difficult to identify them with absolute certainty since the jewels were only stamped “Chanel.”

Clues to the legendary collaboration appear in fashion magazines of the period.  A 1934 item in British Vogue said, “At the opening of the Ambassadeurs restaurant, the Princess Jean-Louise Faucigny Lucinge wore gold sandals matching her gold sequined Lelong dress.  She wears some of Chanel’s already famous jewelry, designed by the Duke di Verdura.  The bracelets of heavy gold are sunk with brilliant stones, reminding one of the Byzantine or Merovingian barbaric splendors.” 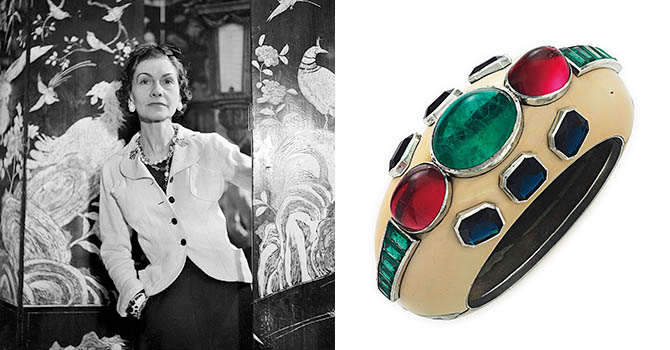 When a costume bracelet Verdura designed for Coco Chanel’s personal collection came up for auction at Christie’s-New York on June 9, 2016, there was a bidding war over the jewel.  The dramatic design composed of silver, enamel and a gigantic sugar-loaf shape simulated emerald and rubies sold for $100,000, almost triple the high estimate.  That’s $100,000 for a piece of costume jewelry. 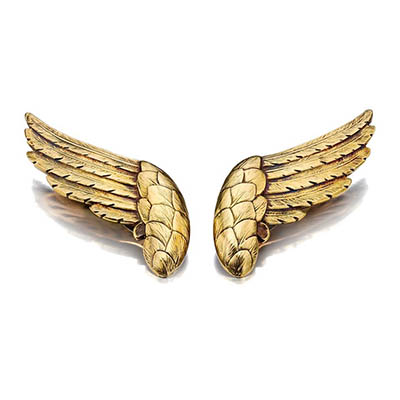 Now, another enchanting Chanel jewel designed by Verdura is being offered at  Siegelson, an estate jeweler well known for finding covetable twentieth century masterworks.  The Mercury Wing brooches were part of Verdura’s final collection for Chanel made in 1934.  Like the bracelets described in Vogue the same year, the brooches are bold examples of the jewelry designer’s aesthetic.  “Verdura was educated in fine art and history,” explains Lee Siegelson.  “He drew on mythological sources, but he recreated the themes in playful and oversized modern jewels.”

The large wing brooches measure 3-7/8 x 1-3/8 inches.  Like other designs Verdura and Chanel made together, there is a mix of materials.  These are gold and silver-gilt with French assay marks.  A current certificate of authenticity from Verdura accompanies the wings stating that they believe the clips were made from a design by Verdura for the House of Chanel.  The jewels were published in Vogue on May 1, 1934 on a model who wore them clipped together at the top of a blouse with a Chanel gold pheasant-feather cap. 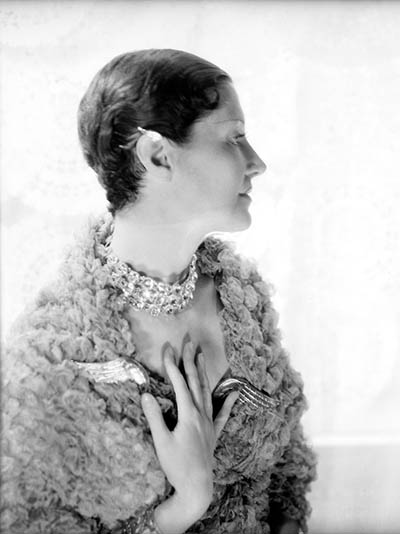 Shortly after the Mercury Wing brooches debuted, they were purchased by Daisy Fellowes, a style icon of the twentieth century with one of the most exceptional collections of jewelry ever assembled.  “She had nearly limitless wealth from the Singer sewing fortune of her grandfather that gave her the ability to purchase whatever she wished,” explains Siegelson.  “Her jewels come up infrequently at auction and when they do, they are sought after for their beauty and also for their sense of personality and wit, much like Fellowes herself.”  The socialite’s most celebrated jewels include a spectacular tutti-frutti Cartier necklace and a legendary pair of diamond and emerald Manchette bracelets by Van Cleef & Arpels inspired by Mughal Indian designs.

Fellowes clearly had a passion for winged jewels.  In addition to the Verdura for Chanel set, she owned a pair of stunning diamond and sapphire pigeon wing brooches that were created for her by Boivin in 1936 and sold at Sotheby’s in 1991.  The similar silhouette of the Boivin jewels to the Chanel Mercury wing clips has lead journalists, historians and jewelry experts to misidentified the wings in an iconic Cecil Beaton photo of Fellowes.  Siegelson’s acquisition and research of the wings corrects the attribution for the first time in decades.

The way Fellowes wore the wings on a fluffy feather jacket, like the coats that are so popular today, is a demonstration of her visionary style.  Another astonishingly modern element in the image, beyond her shortly cropped hair and pencil thin eyebrows, is the wing ear cuff clipped to the top of her ear.  The ear piece was also a part of the collection of Verdura for Chanel jewels.  The biggest jewel in the image is the wide choker set with cabochons that is believed to be by Boivin.

The brilliance of Verdura’s Maltese Cross cuffs for Chanel were a major clue that their collaboration was ingenious.  The jewel that appeared at Christie’s in June confirmed the drama of their work.  Now, these Mercury Wing brooches show a lyrical side to the duo’s style.  We can only hope more pieces appear on the market to fill in the holes in the history of their imaginative creations.

The Verdura for Chanel Mercury Wing Clips will be on display at the TEFAF fair in New York at Siegelson from October 22-26, 2016.