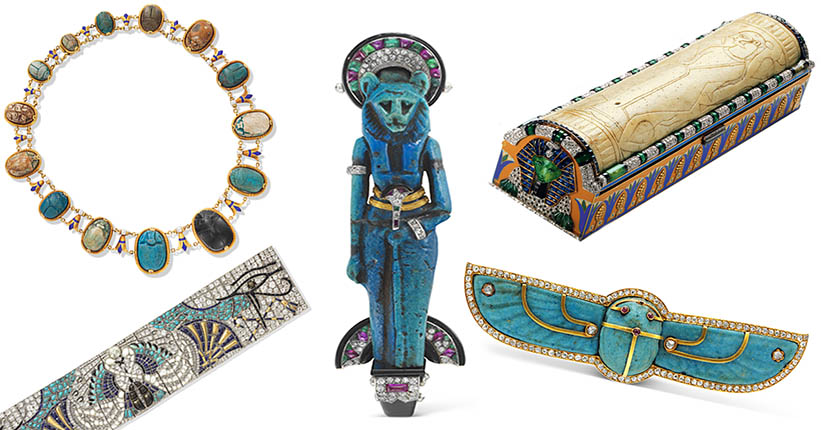 An array of Egyptian revival jewels from FD Gallery. The box in the upper right is from the Cartier Archives. Photo FD Gallery and Cartier

It always begins the same way. A long procession down a dark and stifling tunnel; flickering torchlight; a crack in the stone, and the hiss of ancient, stale air being sucked out of a sealed tomb. The treasure inside glitters and gleams excitedly in the dancing flames of the torch. Pray for no curses.

The archaeologist inside all of us is always entranced by the buried loot of the ancients. It’s one of the reasons Egyptian Revival jewelry is so enticing. Luckily for jewelry connoisseurs out there, there have been multiple swells in the span of history that have laid way to an aesthetic resurgence and intense interest in all things Egyptian during the last two hundred years. 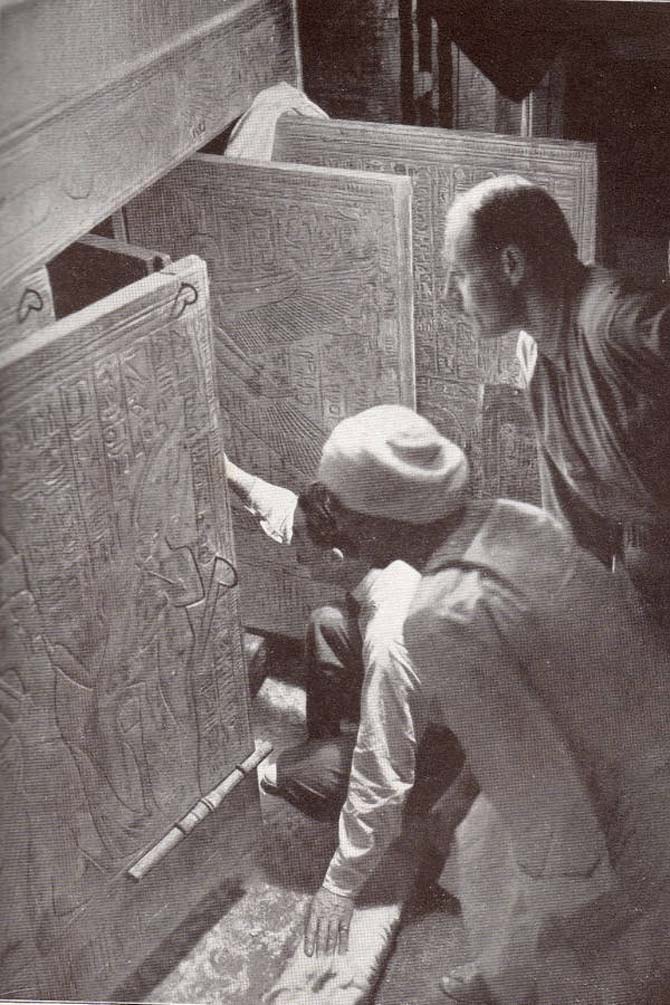 Just a few of the many sticking points in the 19th century timeline of Egyptomania include the opening of the Suez Canal in 1869, displays at World’s Fairs and the moment when Cleopatra’s Needle was erected in Central Park in 1881. The most famous 20th century Egyptian discovery occurred in 1922 when Howard Carter and his team unearthed the tomb of King Tutankhamen. It inspired Tiffany, Cartier, and Van Cleef & Arpels among others to make Egyptian style designs. 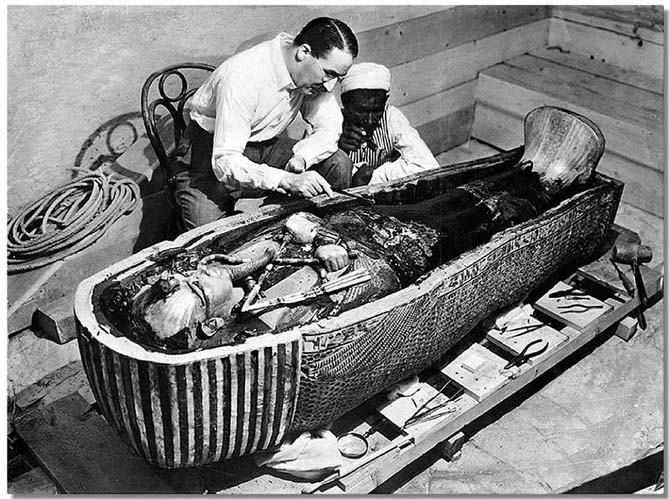 FD Gallery is a trove of all sorts of beautiful objects and jewels, but when the collector has a discerning taste for pharaohs and sphinxes, it is the place to come. Fiona Druckenmiller started the gallery in 2010 after a long career on Wall Street, and has assembled a team of experts beyond belief. Housed within an elegant and newly remodeled townhouse on East 80th Street, the boutique could not be more luxurious and special. Fernando Bustillo, her managing partner and right hand man, spoke to me about the taste for Egyptian Revival jewelry in 2020, and elucidated many of the nuances of just how this specific aesthetic taste fits into life today

How do you contextualize Egyptian Revival to collectors today? Is there any coaxing that needs to happen?

We tell the story. So many of the jewels in our collection have rich past lives and are accompanied by colorful stories that should be shared, but few can rival a link to the mystery and imagery of pharaonic Egypt. A boy king, a lost tomb, soaring monuments and the wonders of a forgotten age—it is such a seductive story!

Do you prefer 19th century Egyptian Revival to 20th century? Can you briefly explain the difference?

Napoleon’s Egyptian campaign in 1798 ignited the West’s fascination with motifs we have all come to associate with Egyptian Revival—sphinxes, pyramids, palmettes, papyrus leaves. This curiosity was further stimulated by the excitement surrounding the completion of the Suez Canal in 1869, after 10 years of construction, arousing a real revival of the Egyptian style, with jewelers specifically incorporating artifacts that were thousands of years old, faience in the shapes of falcons and scarabs, set into jewels framed by vermilion enamel and lapis lazuli. Delicate, beautiful, sedate pieces, imbued with a patina of history, but I tend to prefer what came after 1922, when the West was convulsed by Egyptian exoticism. 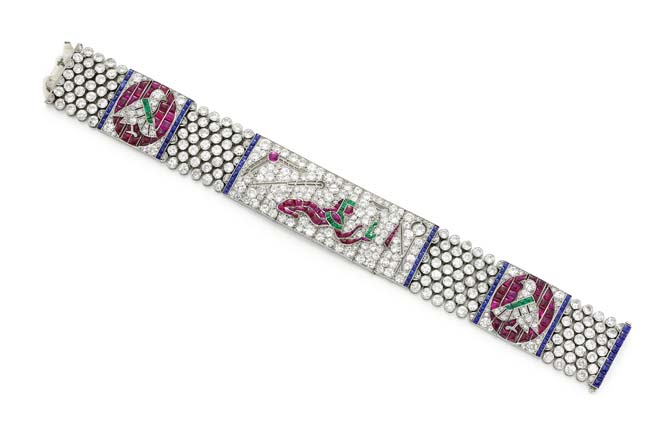 Do you have certain collectors on speed dial when you get in a great new piece?

Even better, recently I was tasked by one collector to find “an extraordinary Egyptian Revival Bracelet” which he wanted to present to his wife to commemorate their upcoming travels to Egypt. Challenge accepted! Though it still took me 10 months of my own sort of excavating before I unearthed the most beautiful 1925 bracelet by Lacloche Frères—a wide diamond strap centering on a winged scarab flanked by cranes and papyrus, a crook and flail, and decorated with the eye of Horus. It is the quintessential Egyptian Revival bracelet, a stunner!

The Lacloche bracelet I cited above checks every single box, it is exceptional. The ornamentation is inspired by the usual repertoire of motifs derived from religious symbolism of the ancient Egyptians: composite deities, cosmic bodies, symbols of royal power, winged scarabs, nods to the afterlife. The colors bring a lively touch to these scenes, especially the combinations of turquoise, dark blue sapphire and bright yellow gold, which together reflect the tumultuous entry Egyptian influences made into the jewelry cosmos. 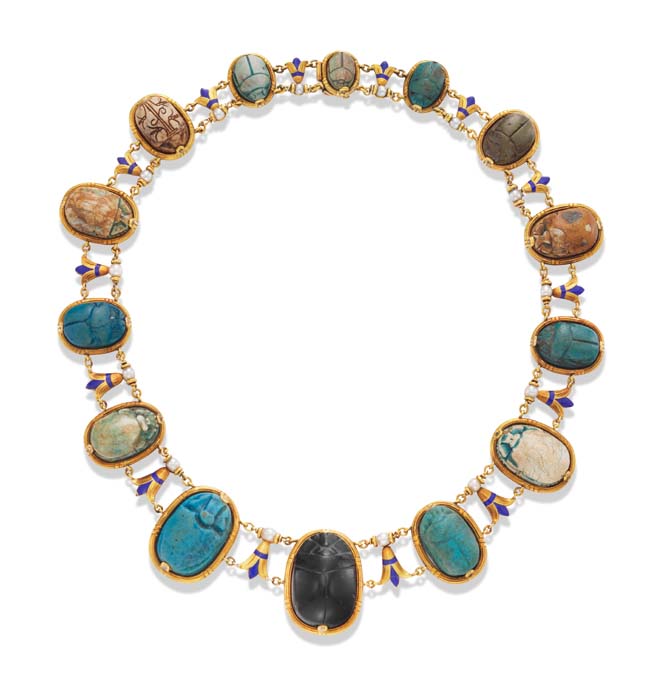 Any Egyptian Revival pieces you’ve had with amazing provenance? Is it possible to research the exact history of some of the original scarabs or faience that were used?

No provenance of note unfortunately. As for their history, it has been challenging to trace the origins of some of these ancient amulets, but we have learned so much from the antiquities dealers when we participate in the TEFAF art fairs. We had a scarab necklace at the Spring show here in New York earlier this year, and a neighboring dealer admired it and dated the scarabs to the Middle Kingdom and Ptolemaic periods, something we otherwise would have never known, as we bought it knowing only that it was beautiful. Surprisingly he also shared that the scarabs alone were worth much more than what we were asking for the necklace. We are still learning about the antiquities end of this, it can sometimes feel like a new language. 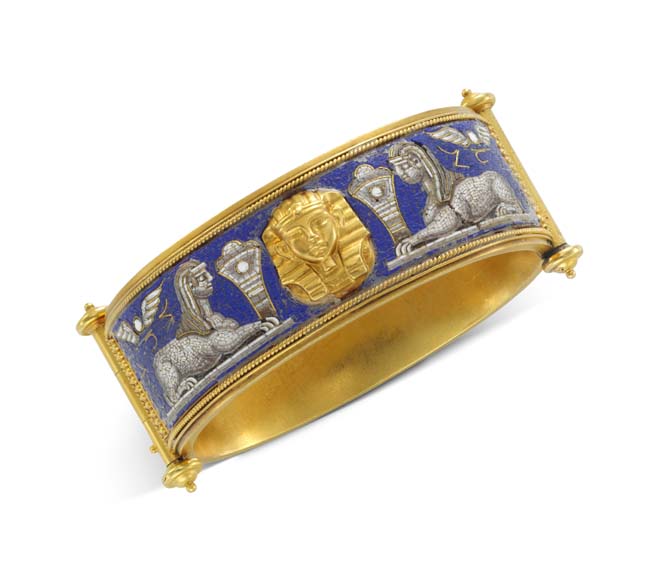 How long has Egyptian themed jewelry been a focus at FD?

Since our very first day. Our owner Fiona Druckenmiller, has always had a fascination with all things Egyptian Revival, and had wonderful examples already in her personal collection when we opened FD. One is a wide bangle, dating to about 1870, micromosaic and gold, depicting a gold pharaonic mask shouldered by a sphinx on each side on a lapis colored background, with the reverse set with alternating scarabs and ibises. It was this bracelet that first fueled her enthusiasm for Egyptian Revival, so her directive from inception has been to find more!

What’s your favorite piece you’ve had in the shop?

We owned a very simple brooch a few years ago, designed as a large winged scarab, the blue glazed faience set in a frame of gold and rose-cut diamonds. [Seen in the photo at the top of the interview.] In the imaginary world of the ancient Egyptians, the winged scarab represented the sun god Khepri and symbolized resurrection and immortality. Scarabs were worn as a talisman to protect humans from evil spirits, and these winged scarabs were placed on the chests of the dead, over their hearts and always face upwards, to serve as protection during the afterlife. The brooch was heavy, which narrowed the pool of buyers, so we had the pleasure of owning it for a while. 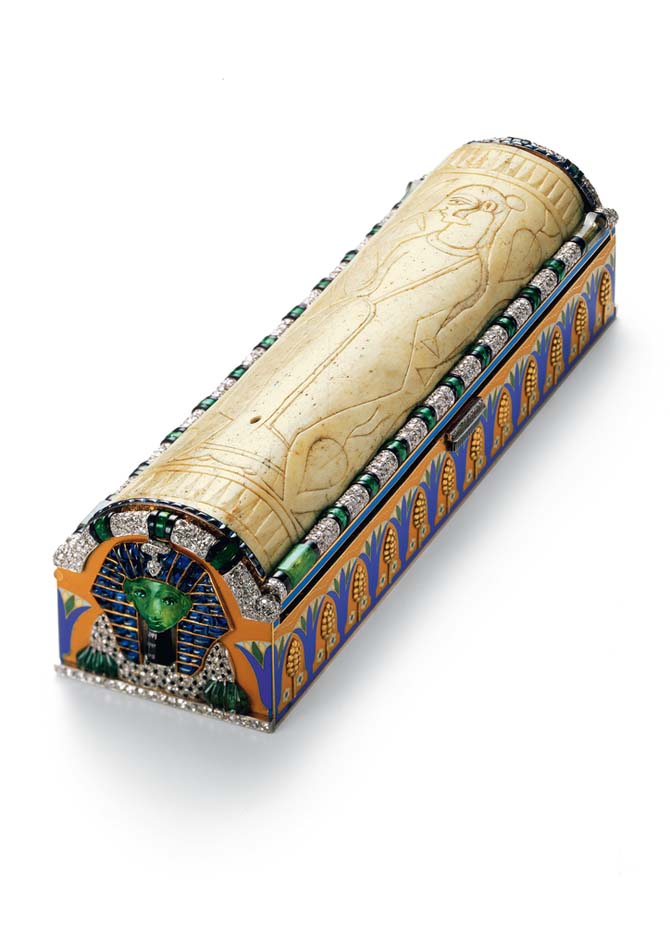 What is on your hidden treasure map, the piece you MUST find?

The piece I desire the most is a 1925 vanity case by Cartier in the shape of an Egyptian sarcophagus. The convex cover is a solid piece of antique bone, the sides of the case are decorated with a pattern of lotus flowers, and each terminal end is adorned with the jeweled Pharaonic face of an almost Disney-like looking sphinx, carved from a single piece of emerald, his yellow and blue headdress is striped in bands of gold and sapphires and recalls the funeral mask of Tutankhamen. It is a principal masterpiece among Cartier’s Egyptian creations. I want it but it’s part of Cartier’s Archives. Second on my wish list is the Boucheron Gold Falcon Crown commissioned by King Fuad I of Egypt in 1928 for his wife Queen Nazli — but that one is lost!