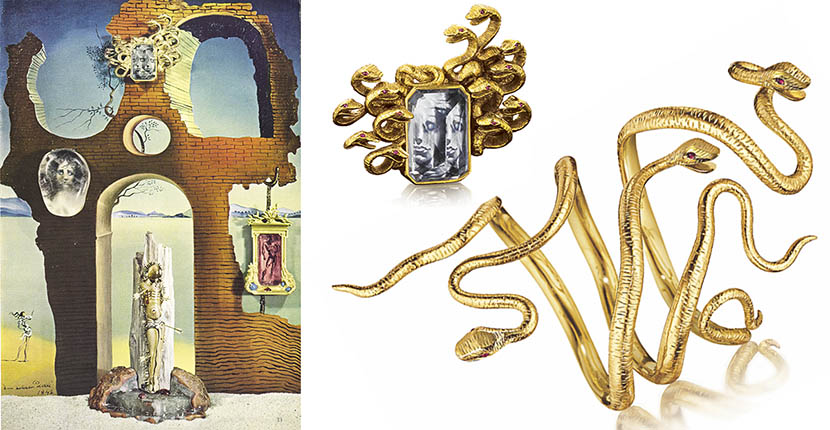 Dali painting with jewels from his collaboration with Verdura for a 1941 article in Vogue and vintage Verdura-Dali Medusa brooch and new Sidewinder bracelet Photo Salvador Dali/Vogue, July 1941/Conde Nast; Jewels Courtesy of Verdura 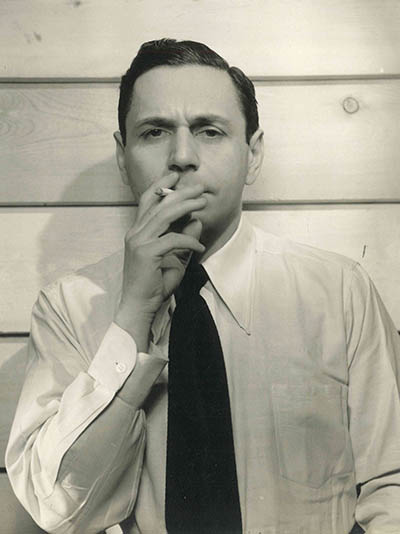 “Fulco and I have tried to discover whether it was the jewel that was for painting or painting for the jewel,” artist Salvador Dalí told Vogue in July, 1941 about his collaboration with designer Duke Fulco di Verdura.  He went on to add, “We are sure, however, that they were born for each other; it’s a love marriage.”

The artist and the jewelry designer’s historic collaboration on five pieces with a surreal spin is being celebrated by Verdura with a new capsule collection that riffs on their work, but more on that later.  First, a look back at the moment when the surrealist met the titled Italian.

By the time, Verdura opened the doors to his jewelry business in New York on September 3, 1939—the day World War II was declared by Britian—he was already a celebrated designer.  He had worked for Coco Chanel for several years where he created her iconic Maltese Cross Cuffs and the soaring Mercury Wing Brooches.  Then he became famous in America as one of jeweler Paul Flato’s talented group of designers.  Shortly, after he started his own business, Verdura provided the jewelry for Katharine Hepburn to wear in the 1940 classic Philadelphia Story.

Beyond his professional achievements, the duke was a beloved member of Café Society from his days in Paris and that is how he wound up meeting Salvador Dalí.  Patron of the arts, Caresse Crosby who is considered “the literary godmother of the Lost Generation” invited Verdura to visit her plantation in Virginia, where she was hosting the artist and his wife Gala, to talk about a jewelry collaboration. 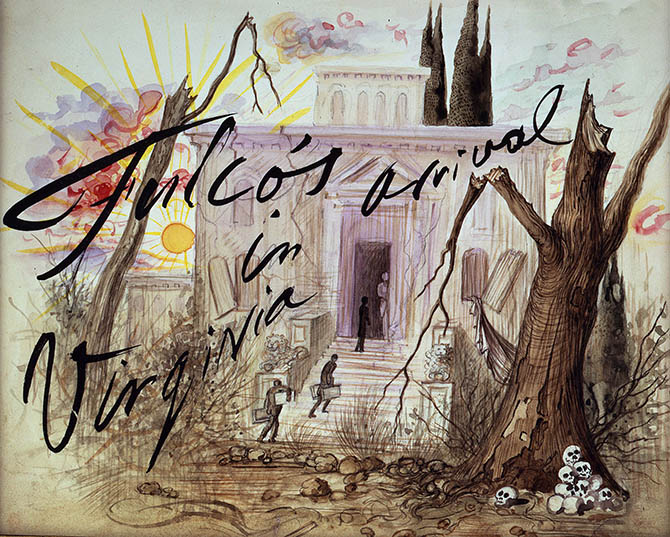 Verdura wrote about his surreal encounter with Dalí at the socialite’s rickety old Virginia manor for the May 1941 issue of Harper’s Bazaar:  “Back in the sitting room. It was deathly cold.  Everyone had on an overcoat.  I had removed mine when I first came in and by now was too numb to ask for it.”  He went on to add, “Dalí kept saying: ‘it is the atelier of Picasso.’  This I have never seen; but I am told it is of the same squalor with no ashtray emptied since the Blue period.” 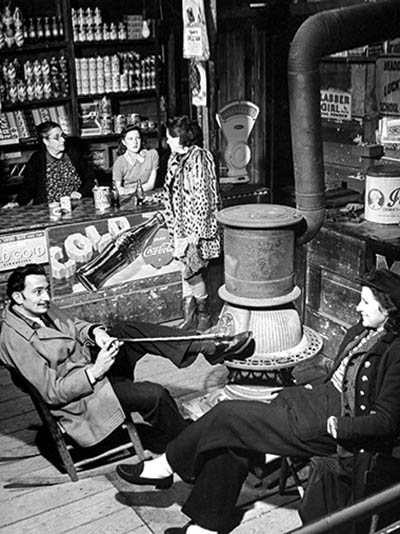 Dalí and Gala in front of a pot belly stove at grocery store in Virginia. Caresse Crosby is at the counter. Photo by Eric Schaal/Pix Inc./The LIFE Images Collection/Getty Images

The tale’s happy ending reveals the encounter was an elaborate joke.  Dalí had spent days setting the scene.  Verdura loved the farce thoroughly and immediately agreed to collaborate on some jewels.  The collection centered around their shared interests in mythology and the renaissance, themes surrounding love, loss and faith, relevant amidst the atrocities of the war.

A couple of the jewels that illustrated the Bazaar story, featured Dalí drawings set within a Verdura jewel.  The Apollo and Daphne brooch had a gold Palladian door with a turquoise and ruby-studded pediment and a Dalí drawing of the Greek god.  A Medusa brooch (in the photo above) featured a Dalí drawing of the Gorgon set under a morganite surrounded by wildly sculptural green-gold snakes.  A painting by Fulco, depicting his arrival at the house, was also in Bazaar story. 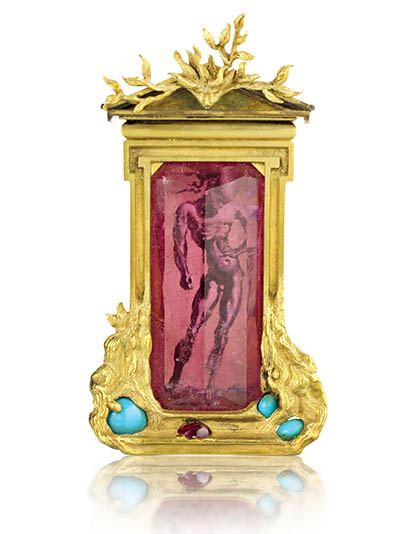 The collection of jewels by Dalí and Verdura debuted at the Julien Levy Gallery in New York with an exhibition of the artist’s paintings.  Next, they were displayed at the Museum of Modern Art in New York from November 1941 through January 1942 in conjunction with an exhibition on Dalí and Miró.  Afterwards, they went on a tour to at least eight museums around the country including the Cleveland Museum of Art, The California Legion of Honor and the Detroit Institute of Arts.

When the art tour ended, Standard Oil heiress Millicent Rogers bought three of the five pieces.  Her friend the Russian couturier Valentina picked up the oversized Dogwood brooch composed of pink tourmalines and yellow sapphires.  Her jewel was included in a painting Dali did for a story about the collection in the October 1943 issue of Vogue. 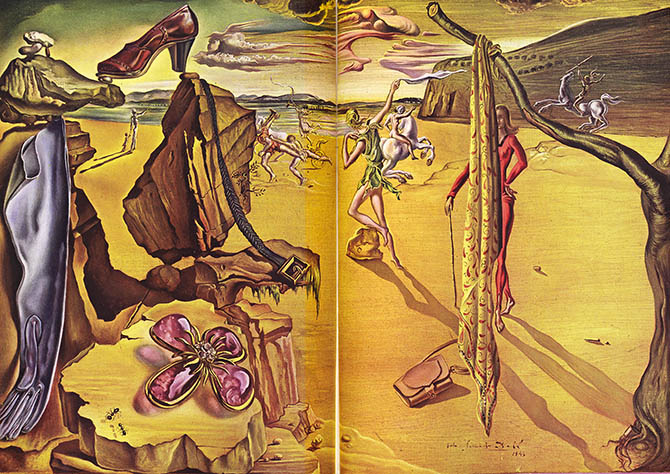 When Verdura celebrated its 75th Anniversary in 2014 with a magnificent exhibition, The Power of Style, the company’s Chairman and CEO, Ward Landrigan and President Nico Landrigan secured several pieces from the collaboration for the display.  In so doing they began to delve deeper into the background of the designs.  “Of course, we had always known about the collaboration, but we didn’t know the extent to which it was on display in museums,” explains Ward.  “Once we realized it had some historical legs we began to look at it in a more serious way.”

The research uncovered the series of shows and influence the twosome had on each other.  “The drawing that illustrated Verdura’s story for Harper’s Bazaar in May, 1941 ignited his foray into the area of miniature paintings,” says Ward.  “He went on to stage several exhibitions of them with Dali’s gallerist, Julien Levy.  Surreal elements can also be seen in some of his jewels of the period.”  As for Dali, he went on to create lots of jewelry on his own.  Many pieces are on display at the Dalí Theatre Museum in Spain and in the publication about the works housed there Dalí: Jewels Joyas. 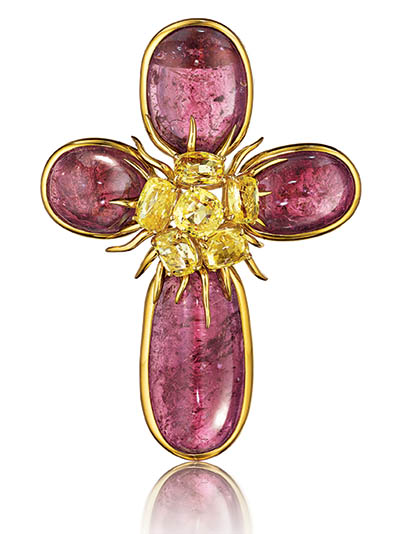 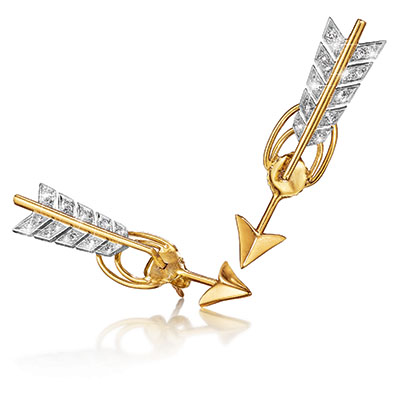 “After the 75th Anniversary, Nico got interested in doing a collection based on the Verdura Dali things,” says Ward.  “He made some great playful pieces and revived a few archival designs that have the same spirit.”

The Out of This World, From the Celestial to the Surreal collection features several sexy variations on the Medusa brooch in gold snake bracelets, earrings and rings.   A Dogwood pendant-brooch is in the mix.  And there are some remarkably modern arrow earrings that you might think were a new creation but in fact they are a vintage Verdura design.  It is a great reinterpretation of the eternal themes of mythology, the renaissance, love and faith.