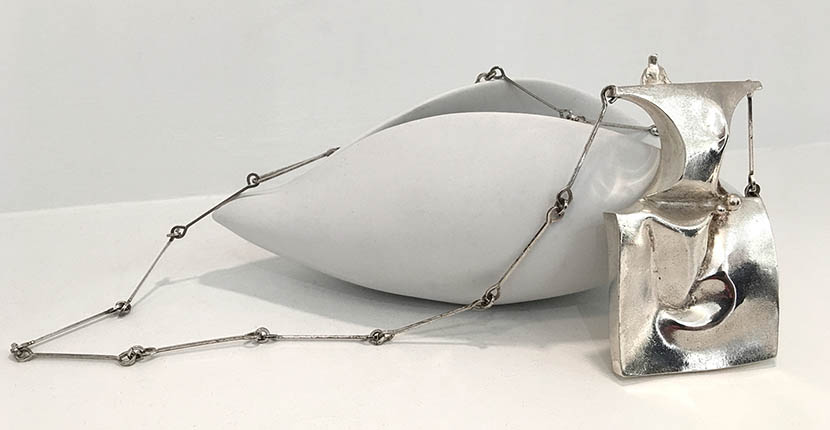 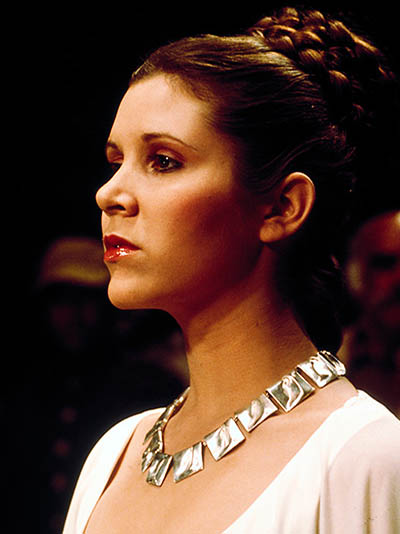 *This article was originally published on December 14, 2016 in advance of the release of Rogue One. It is being highlighted again in honor of the release of Star Wars: The Rise of Skywalker. Read about the jewelry in Rouge One here.

While there is no sign of jewelry in the trailer for the eagerly awaited installment in the Star Wars series, Rogue One, I am holding out hope there may be some sparkle on Felicity Jones in the production.  After all, a legacy of good accessories dates back to the first 1977 film.

In the final scene when Princess Leia presents Han Solo and Luke Skywalker with the Medals of Bravery, she is majestically bejeweled in the silver Planetoid Valleys necklace and Darina’s cuff bracelet by Finnish designer Björn Weckström. While almost everything in the sci-fi movie was custom made for the production, the jewelry was bought off the rack, so to speak.

“It came from Björn’s Space Silver collection,” explained Scandinavian vintage jewelry expert Beatrice Nordlings during a visit to the Nordlings pop-up shop on the Lower East Side of Manhattan. “When Stars Wars was near the end of the production on location in London, George Lucas himself sought out the jewelry designer to commission a necklace for Carrie Fisher to wear in the final scene.”

While it might seem amazing that the writer and director of the epic had time to track down a jewel, the story makes sense once you see the jewels and learn about Weckström’s sources of inspiration. “He was interested in Buddhism and Greek mythology as well as the cosmos, similar to George Lucas,” explains Beatrice. “All of these factors played into the artistry of the Space Silver collection when he launched it in 1969 at his studio in Helsinki.” The collection debuted the year Apollo 11 landed on the moon, eight years before Star Wars debuted in theaters. 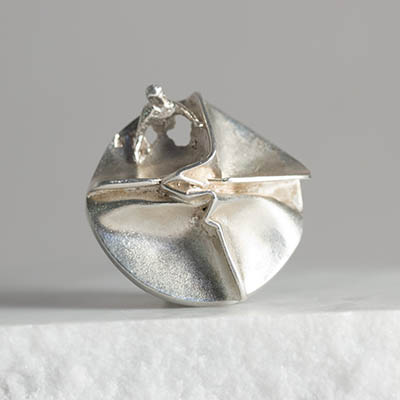 It’s possible Lucas read some of the press coverage of the jewelry or simply saw the designs at a London boutique that carried the collection. One look at the vintage pieces from Weckström’s Space Silver collection on display at Nordlings shows the sci-fi mastermind and jewelry designer not only shared similar interests, there is a shared aesthetic. The undulating silver on the Icarus necklace above reminds me of the sand dunes on Luke Skywalker’s home planet Tatooine. The figure that is in a couple of the jewels is reminiscent of a robed Jedi knight.

While Lucas was familiar with Weckström’s work, the award winning jewelry designer had no idea who the director was when his office contacted him to request a special creation for the leading lady of Star Wars. Nevertheless, he agreed to create a special commission piece. When the filming schedule was rushed, unfortunately he could not finish it in time. Weckström referred the Lucas team to one of the London stores that carried the collection of around 50 designs.

Weckström did not know what, if anything, the film crew ended up buying. The designer only found out after a friend had seen the movie and told him the Planetoid Valleys necklace and Darina’s cuff bracelet were worn by Carrie Fisher in the film. “The jewelry is really outstanding,” says Beatrice.  “It’s wonderful that it appears in such a beloved movie.”

Björn Weckström jewels from the Space Silver collection can be seen at Nordlings pop-up shop in New York City located at 160 Orchard Street until December 24, 2016.  They are also online at nordlingsantik.se

There Is Lots of Jewelry In ‘The Last Jedi’