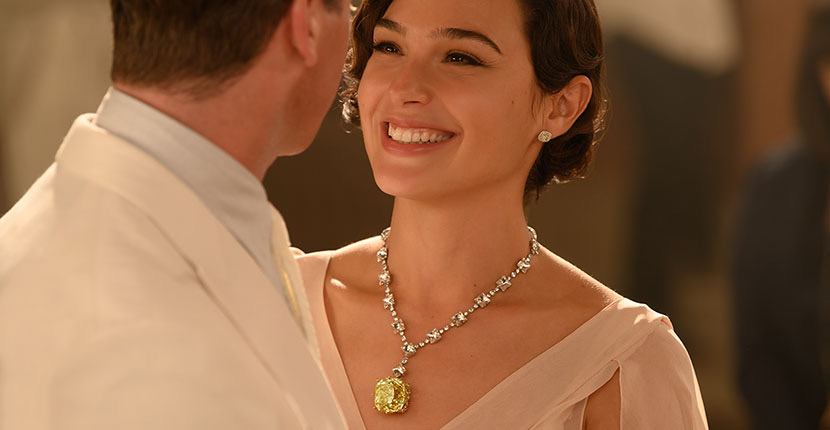 Armie Hammer as Simon Doyle and Gal Gadot as Linnet Ridgeway wearing a recreation of the Tiffany Diamond Necklace in Death on the Nile. Photo by Rob Youngson. © 2020 Twentieth Century Fox Film Corporation. All Rights Reserved.

A Plot Twist with The Tiffany Diamond

When Lady Gaga wore the 128.54-carat Tiffany Diamond to the Oscars and after-parties in 2019, it was just about all anyone I knew in the jewelry world could talk about the next day. I have to confess, we all wondered about the security detail. How did they manage it?

Yet there wasn’t a noticeable presence of security surrounding Gaga. “Guards must have been everywhere, seated in the audience, backstage, everywhere!” one friend of mine said. “They must have been dressed for the red carpet and less obvious than Secret Service.”

My friends and I don’t usually ponder security specifics, but the Tiffany Diamond is the type of one-of-a-kind wonder that looks like it would be the target of talented thieves. It is the kind of jewelry that appears in movie plots.

Clearly, we weren’t the only people to have this thought. 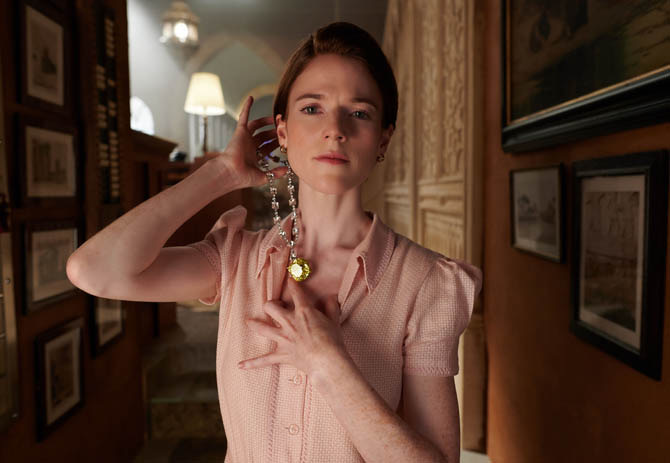 Rose Leslie as Louise Bourget holding up the recreation of the Tiffany Diamond necklace in ‘Death on the Nile.’ Photo 20th Century Fox

A recreation of the Tiffany Diamond necklace Gaga wore is featured in Death on the Nile, Kenneth Branagh’s remake of the 1937 Agatha Christie novel.

The book was first made into a movie in 1978. It starred Maggie Smith, Angela Lansbury, Bette Davis, Mia Farrow and Peter Ustinov as the detective Hercule Poirot. I vividly remember watching it as a child. The glamour and intrigue left an indelible impression.

The main plot of the movie is murder not a jewelry heist, but clearly the new production made the most of the jewel and intrigue a piece like that inspires.

The Tiffany Diamond necklace is a wedding gift given by Simon Doyle played by Armie Hammer to his bride Linnet Ridgeway Doyle played by Gal Gadot. She is so enchanted with the piece she wears it during their honeymoon cruise down the Nile where everyone is dress to the nines. It’s her travel jewelry. 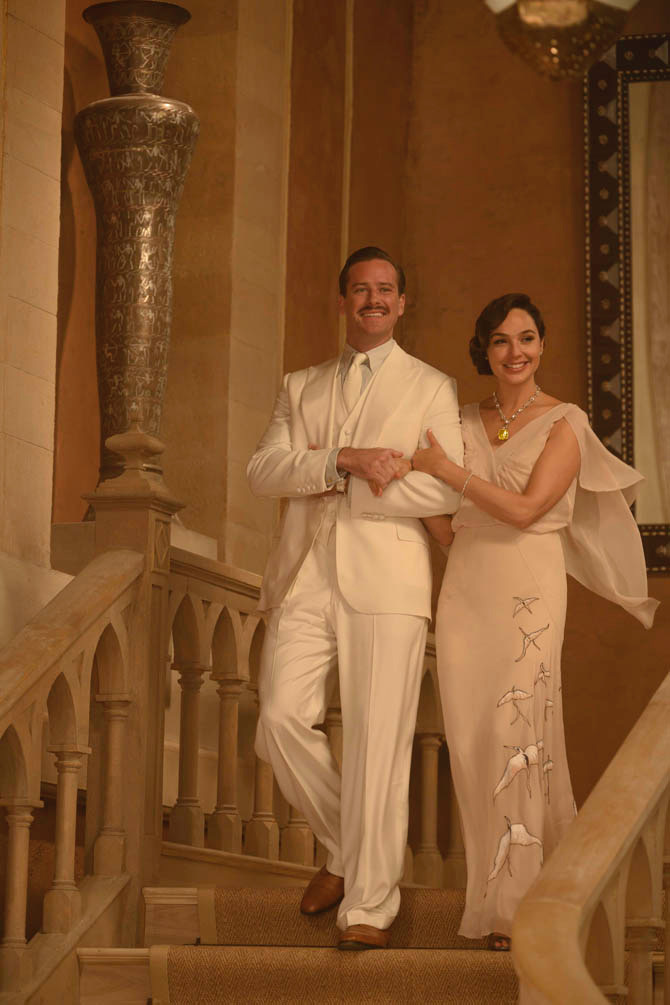 The movie takes place during the late Art Deco period in the 1930s. The style of the necklace matches this moment in time despite the fact that it was conceived in 2012. The diamond was set in the 100-carat diamond necklace to celebrate Tiffany’s 175th anniversary. There is a clean geometric pattern to the jewel that echoes Jazz Age styles.

But the 128.54-carat diamond dates from before that period.

Discovered in 1877 in South Africa, the 287.42-carat rough stone was purchased by Tiffany’s founder Charles Lewis Tiffany for $18,000. He sent his chief gemologist George Frederic Kunz to Paris with the diamond to oversee the cutting which took a year. The gem was fashioned into a cushion-shape brilliant weighing 128.54-carats with 82 facets.

In a truly grand decision and visionary move in a period when only royalty owned big stones, Charles Lewis Tiffany named the yellow diamond after himself. Then he decided not to sell his gem, but to share it with the public, putting the diamond on display in his store for all to enjoy. It was a contributing factor to the press nicknaming Mr. Tiffany, “the King of Diamonds.” (Find out more about the history of the gem here.) 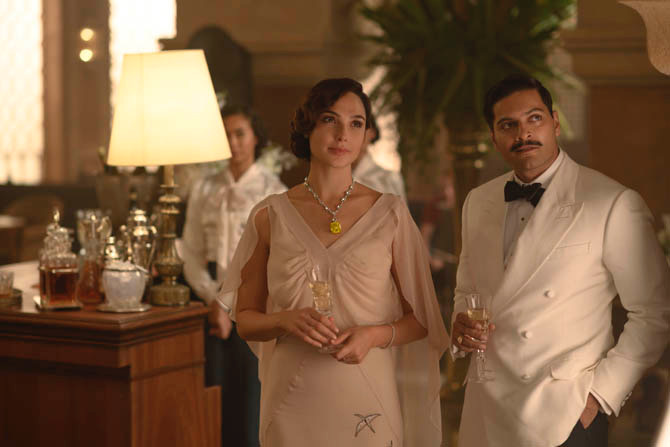 Gal Gadot as Linnet Ridgeway wearing the recreation of the Tiffany Diamond in a scene in ‘Death on the Nile’ with Ali Fazal as Andrew Katchadourian. Photo 20th Century Fox

For the location shoots of Death on the Nile clearly even Tiffany’s supreme security team felt they couldn’t cover the insurance required. So a recreation was made.

If you are wondering has the Tiffany Diamond ever appeared in a movie? The answer is yes.

In Breakfast at Tiffany’s the gem was set in Schlumberger’s Ribbon Rosette necklace and placed in a jewelry case at the Fifth Avenue flagship. When the stars of the film, Audrey Hepburn and George Peppard, enter the store, she off-handedly remarks that she “doesn’t give a hoot about jewelry except diamonds,” looks down into a display case and adds “like that!” The “that” she is referring to is the Tiffany Diamond. Hepburn did not wear the jewel in the film, but she did pose in the piece for publicity images.

Death on the Nile will be released in theatres beginning on December 18. Beyond the special Tiffany Diamond necklace lots of Tiffany diamond jewelry is worn by other characters in the production.

Get a glimpse of the glamour in the video below.

A recreation of the Tiffany Diamond stars in Death on the Nile.

Glamour Lives in ‘Murder on the Orient Express’