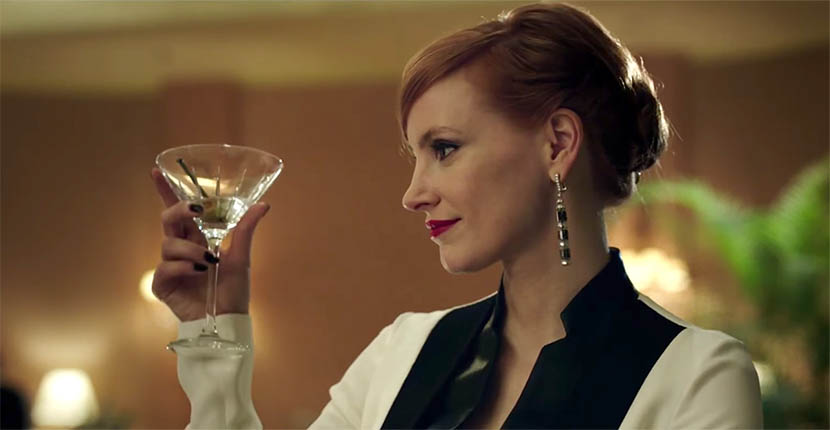 You may not think a Washington lobbyist is anything like James Bond.  No, me neither.  Yet, I thought of agent 007 during a formal dinner party scene of Miss Sloane, when Jessica Chastain, who plays the title role of the power broker, carries around a martini, the British spy’s signature cocktail, while sleekly dressed in a white and black tuxedo jumpsuit and dazzling earrings.  Lo and behold, she is referred to as Bond-like by other characters at least twice in the film after that moment.  Don’t get me wrong, this is not an action movie.  It’s a hard hitting drama.  But there is as much intrigue, double crossing and good versus evil characters, not to mention romps in the bedroom as a Bond film. 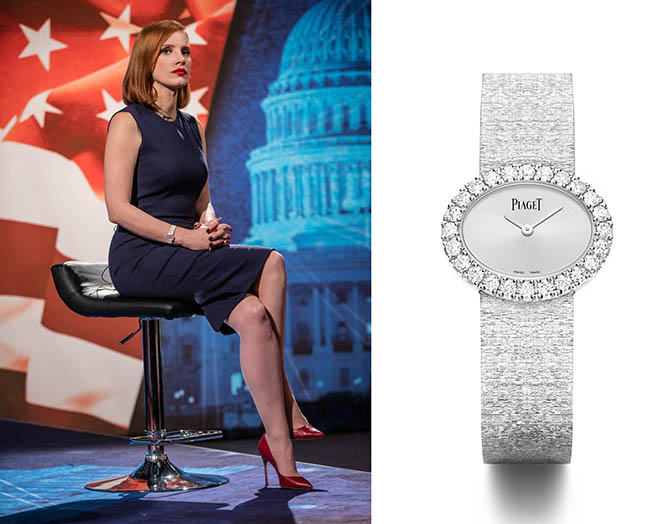 Chastain goes through all of it beautifully accessorized by Piaget.  A brand ambassador for the the Swiss jeweler, the Oscar nominated actress wears the jewelry as magnificently on-screen as she did at the AFI Fest red carpet for the movie.  The aforementioned earrings at the formal party (seen above) are from Piaget’s Couture Precieuse collection.  They are not frou-frou formal wear but as edgy as Miss Sloane herself.  The sharpness in the design is provided by 30 baguette-cut spinels.  The black stones are lit up with 80 brilliant-cut diamonds set in 18K white gold. 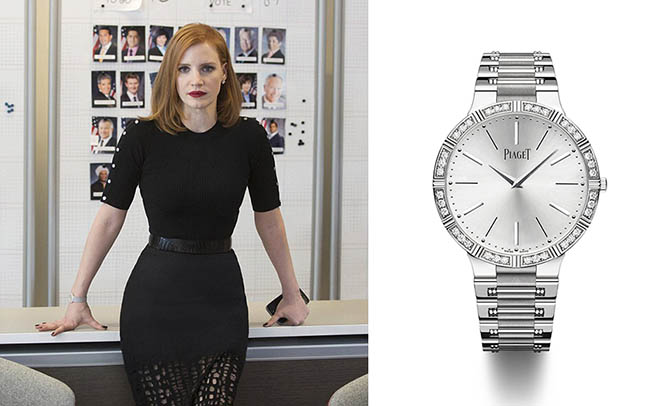 For her office attire, and Miss Sloane spends almost the entire film working, she always wears a pair of epic diamonds studs.  She pairs the sparklers with a diamond watch when she goes head-to-head with her enemy on a morning talk show.  The Piaget Dancer timepiece has an oval dial surrounded by 36 brilliant-cut diamonds on a textured white gold bracelet.

Her favorite watch in almost every other scene in the film is a Piaget Tradition timepiece.  It has a large 38-millimeter silver dial set with 24 brilliant-cut diamonds on the bezel and an 18K white gold decoration bracelet.  The deluxe daytime watch is such a favorite of Miss Sloane’s she even leaves it on during a love scene.  It’s a very Bond moment.