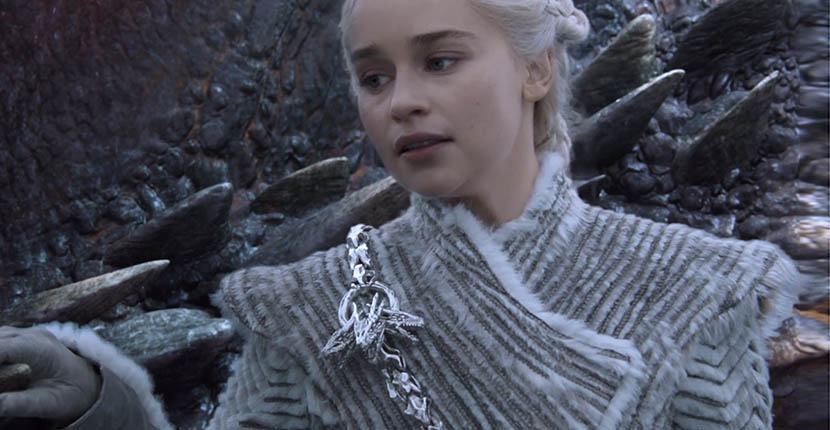 ‘Game of Throne’s’ Jewelry Is Fierce

Jewelry in the wildly popular HBO series, Game of Thrones, is quite symbolic, unfailingly captures the spirit of the character and it can even have secret powers. In Season 6, Carice van Houten’s Melisandre, the Red Priestess of R’hllor (Lord of Light), transformed into a shriveled old woman, as she took off her red choker. OMG! Then the red choker with magical powers turned her back into a beautiful young woman. 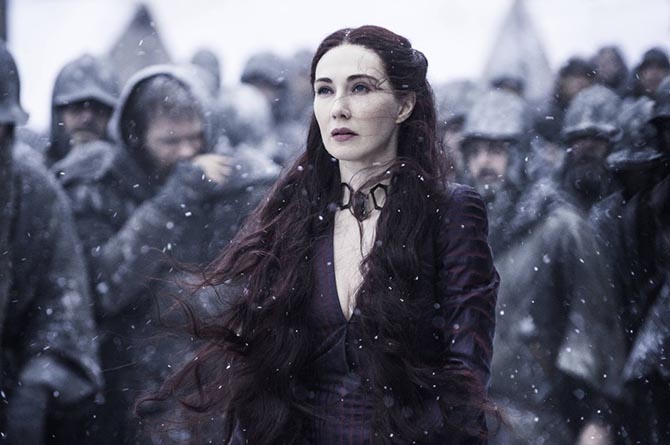 In ‘Game of Thrones’ Carice van Houten is the Red Priestess Melisandre who remains young and beautiful thanks to her magical red choker. Photo HBO

An eye-catching jewel in Season 5 was the neck sculpture worn by Emila Clarke’s Daenerys Targaryen, Mother of Dragons. The piece was hand-carved by London-based art jewelers Yunus Ascott and Eliza Higginbottom, otherwise known as Yunus & Eliza. 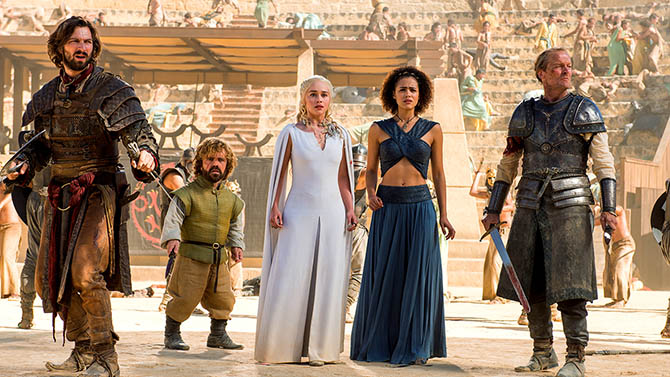 A scene from Season 5 of ‘Game of Thrones,’ cast members surround Emila Clarke’s Daenerys Targaryen, Mother of Dragons who is wearing a necklace carved by Yunus & Eliza Photo HBO

Costume designer Michele Clapton had reached out to Yunus & Eliza, whose aesthetic is very much in line with Game of Thrones, for the special jewel. “There’s a sort of edginess that I thought was really appropriate to Dany,” says Michele. “They seemed to understand what a strong and complicated character she was.” 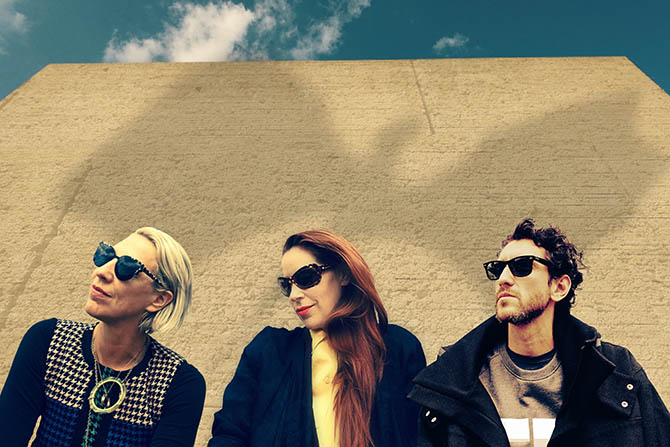 The huge global response to Daenerys Neck Sculpture inspired Michele to team up with Yunus & Eliza to create the MEY for Game of Thrones collection. The collaboration isn’t like the vast majority of merchandise generated from entertainment. There is supreme quality and authenticity to the collection that includes hero pieces from the HBO series and new jewels inspired by them. “We decided to design smaller pieces to sit alongside the ones that feature in Game of Thrones, to create entry points into the look,” explains Eliza who shared some specifics on MEY Designs inspired by Seasons 6 and 7, the Dragon Storm and Breaking Chains Collections. 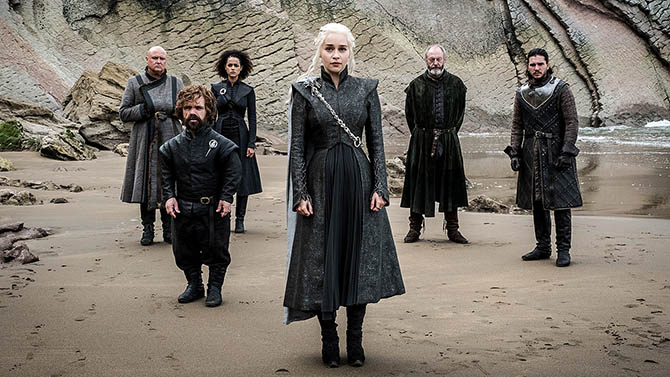 A still from ‘Game of Thrones’ Season 7 with members of the cast surrounding Emila Clarke’s Daenerys Targaryen who is wearing the Mother of Dragons chain. Photo HBO

Why did you blend an intrinsic edginess with rebellion for Daenerys Targaryen in Season 7?

Her jewelry portrays her feelings and intent. It is symbolic, both protecting and menacing. Yunus and Michele and I worked very closely to develop the pieces to work in perfect symbiosis with the character and costume. 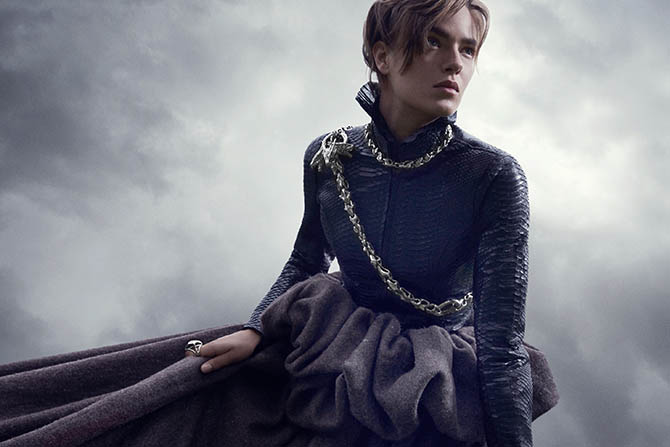 A model wearing jewels from the MEY Designs for Game of Thrones Collection including the Mother of Dragons chain and a Breaking Chains Necklace. Photo courtesy

The long body chain is totally badass. With a strong militaristic feel, the jewelry is different from the rest of the pieces that mirror Daenerys’ fragility and strength. Daenerys is out to reclaim the throne from Cersei Lannister, armed with her determination, the unsullied and her dragons. Is this why the chain has been accessorized in military mode?

Daenerys is now in full battle mode, she intends to claim what is hers. Her whole look embodies this, and the body chain across her chest signals this military intent and power. It still has a fragmented feel and, of course, her dragons are ever present. 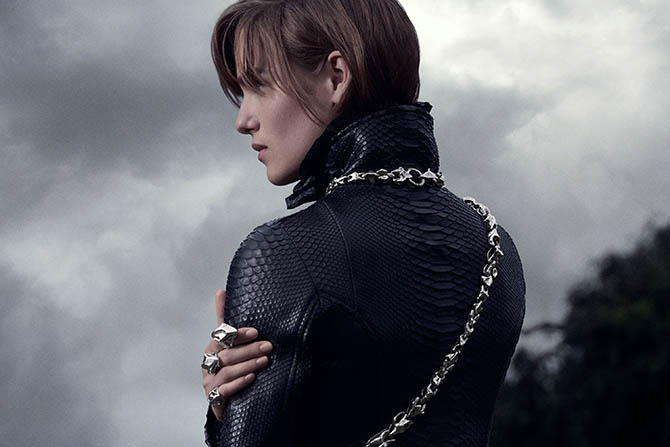 A model wearing jewels from the MEY Designs for Game of Thrones Collection including the Mother of Dragons chain and a Breaking Chains Necklace and Rings. Photo courtesy

The Breaking Chains collection for Season 7 revolves around the hero piece.  Could you tell me more about the design?

Worn by Daenerys Targaryen throughout the series, each link of the chain is a hand carved and fragmented link resembling the dragon spine, and at its heart, sits three dragon heads. Fans can buy an exact replica of the original.  We have used the exact same chain links to create a unisex collection of rebellious statement jewelry. The same three dragon heads are also worn by Daenerys in pin form, which we have reproduced as a scaled-down pendant. 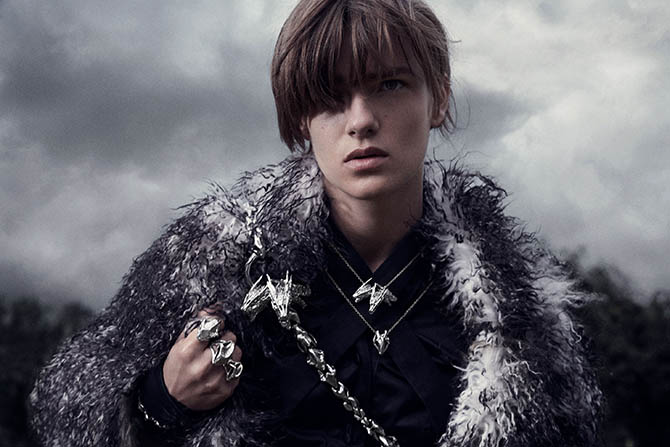 A model wearing jewels from the MEY Designs for Game of Thrones Collection including the Mother of Dragons chain and a Breaking Chains Necklace, Dragon Pendant and Rings. Photo courtesy

Have you designed pieces for other characters in this season? 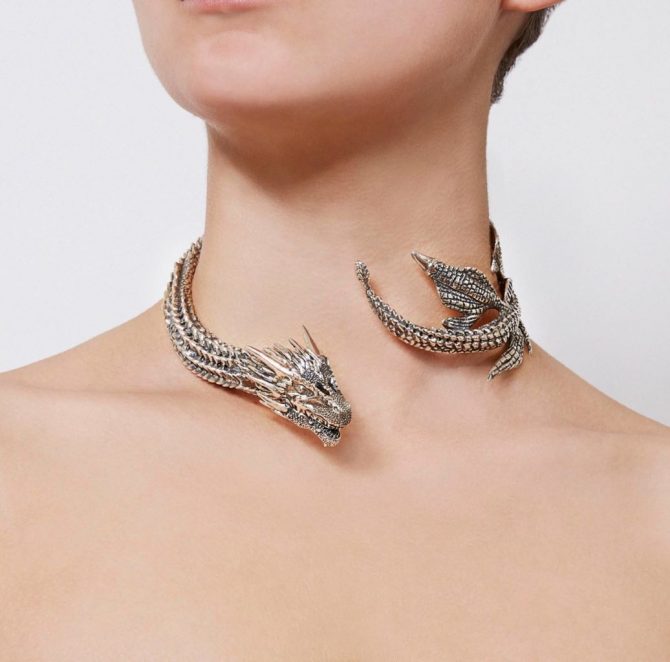 What is the best seller from the Dragon Storm collection inspired by Season 6? Which is the hero piece?

The Drogon neck sculpture features the dragon motif in a hand-carved open collier. Can you elaborate on the finishes as well as the techniques that you’ve employed to make the dragon’s mouth move?

The neck sculpture is hand-carved in wax. We modeled a complete whole and then started stripping back elements to create a more skeletal feel. We then cut it into sections for casting and reassembled it in metal. In the full version of the neck sculpture, the two wings come on and off, so it can be worn in the two styles the Khaleesi wears it.

The Power of Jyn’s Kyber Crystal in ‘Rogue One’