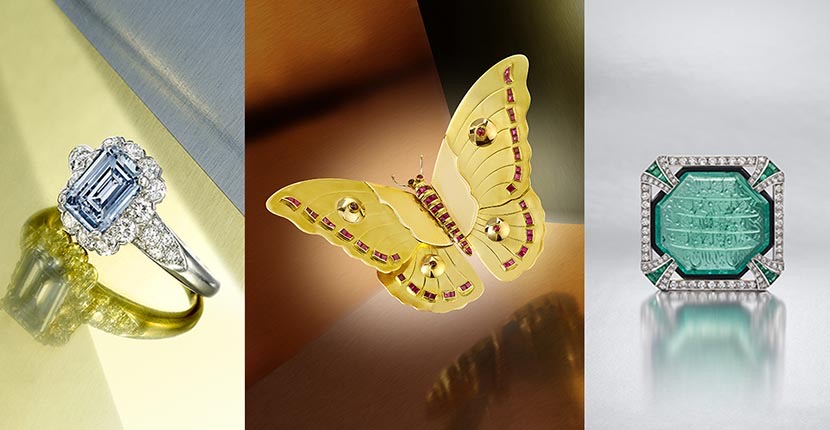 Bidding adieu to summer can be painful. But, for collectors, summer’s end has a silver lining: the fall auction season. That’s some bidding we can get excited about. Particularly this year, as Bonhams is mounting a double-header of blue-chip jewelry sales in London and New York on September 24th and 26th, respectively. We were treated to an advance preview of both and can attest that, with more than 300 lots of superlative jewels, these sales are not to be missed.

From important design to important stones, there’s an array of pieces to get hearts racing and paddles flying. On the signed jewelry front, Van Cleef & Arpels and Buccellati have especially impressive showings. There are also appearances by the highly-collectable likes of Lalique, L’Enfant, and Grima. In terms of gems, there are fancy colored diamonds, a staggering assortment of sapphires from Burma and Kashmir, and some remarkable emeralds from Graff. Read on to learn more about five of our favorites from each sale. 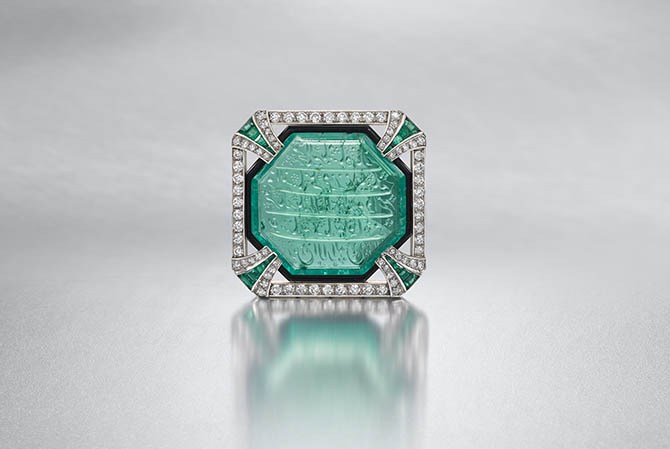 A truly remarkable emerald brooch belonging to the aristocratic beauty who inspired Sir Walter Scott’s famous narrative poem, The Lady of the Lake, is in Bonhams London sale. Lady Mary Hood was a British society doyenne of the early 19th century and, by all accounts, a fascinating character. During a period when she lived in India, the splendor of her travels, sometimes by palanquin (a covered litter with bearers), were likened—perhaps fancifully—to regal progresses and attracted the attentions of Indian royalty.

Mughal Emperor Akbar II gifted this engraved Colombian emerald to Lady Mary around 1813, while she lived in India. Many years later, one of her descendants commissioned the British society jeweler Hennell to set the emerald in a brooch. The Art Deco jewel made around 1925 is composed of diamonds, emeralds, black enamel and platinum.

The brass plaque on the reverse of the fitted case for the jewel says:

This emerald is engraved in Persian with the following words: cream of the pillars of the state, Queen and music of the age, Mary Frederica Elizabeth Hood, noblest of women, Princess, child of the Majesty of Mahommed Akbar, the Emperor, the Warrior. 1813

“This splendid jewel with an evocative and impeccable provenance has been passed down the female line of the family since Mary Hood’s death and is the first time it has been offered for sale on the open market,” explains Emily Barber, Bonhams UK Jewellery Director. “The brooch is a fitting tribute to the extraordinary life of Mary Hood and we are privileged to offer this for sale.” 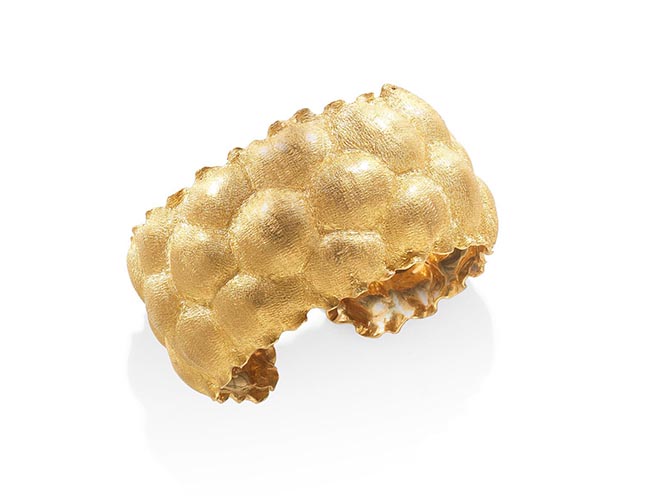 The London sale includes with a very special offering: twenty pieces from the Buccellati family’s private collection. Ranging from 1919 to the ‘60s, each piece was designed by Mario Buccellati, the firm’s founder. It’s incredible to see (or, better yet, wear) the origins of styles that have become Buccellati signatures. Our favorite, though, is a more idiosyncratic design: this cuff, inspired by the bugnato stonework of Florence’s Palazzo Strozzi, that displays Buccellati’s mastery of goldsmithing. 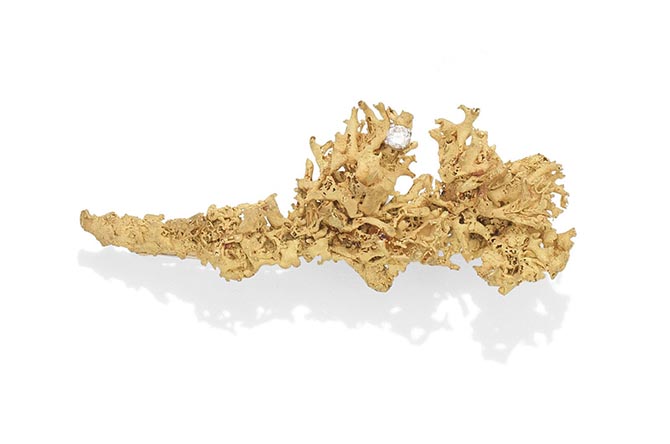 British designer Andrew Grima was a favorite of the royal family — Queen Elizabeth II still sports her pieces regularly — and Bonhams is regarded as the leading purveyor of his work, having sold the largest known Grima collection in 2017. This circa 1975 brooch, a delicate tuft of lichen in 18k gold topped with a diamond “dewdrop,” is particularly noteworthy for its resemblance to a brooch Grima made for Princess Margaret in 1967, cast from a piece of lichen she pocketed on a walk in Scotland.

This delicate and refined Belle Époque necklace was produced by the German firm Koch, who supplied the German royal family as well as monarchs throughout turn-of-the-century Europe. Many of their jewels were unsigned so examples like this are especially rare. Created circa 1910, the necklace features a luminous aquamarine briolette with a diamond-studded cap suspended from an intricately woven seed pearl chain. 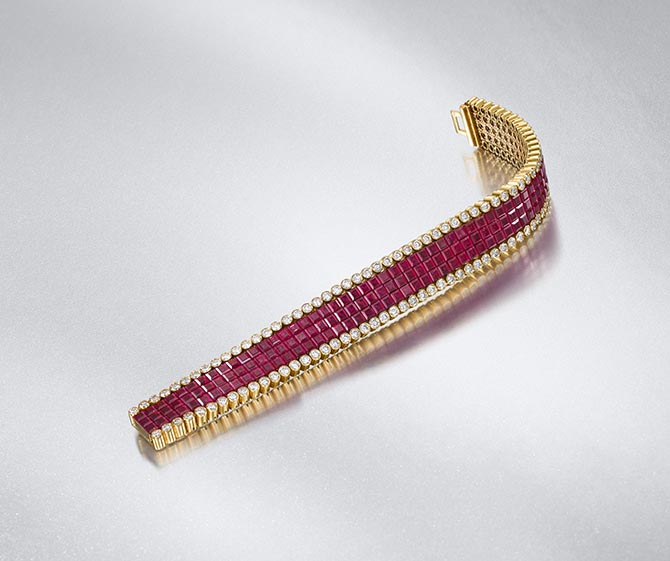 Several of the London sale’s highlights come from one private collection of Van Cleef & Arpels, including this iconic ruby and diamond bracelet. It is part of a suite, with each piece being sold separately, that employs Van Cleef’s signature mystery setting. With 177 perfectly-matched rubies and an impressively fluid setting, the bracelet feels like having the most fabulous piece of ribbon around your wrist. 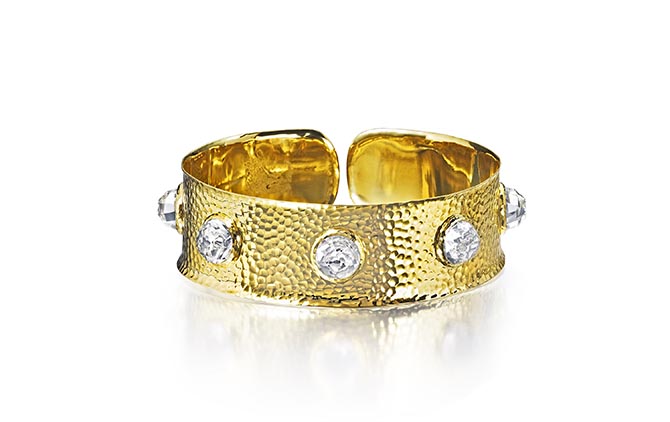 While certainly not the most valuable lot in the New York sale, this collar has style in spades. It’s quintessential David Webb: a bold, eye-catching form in rich, hammered 18k gold punctuated with faceted rock crystal “headlights”. It has a whiff of Dynasty-era extravagance yet would be perfectly chic atop a simple black cashmere turtleneck. 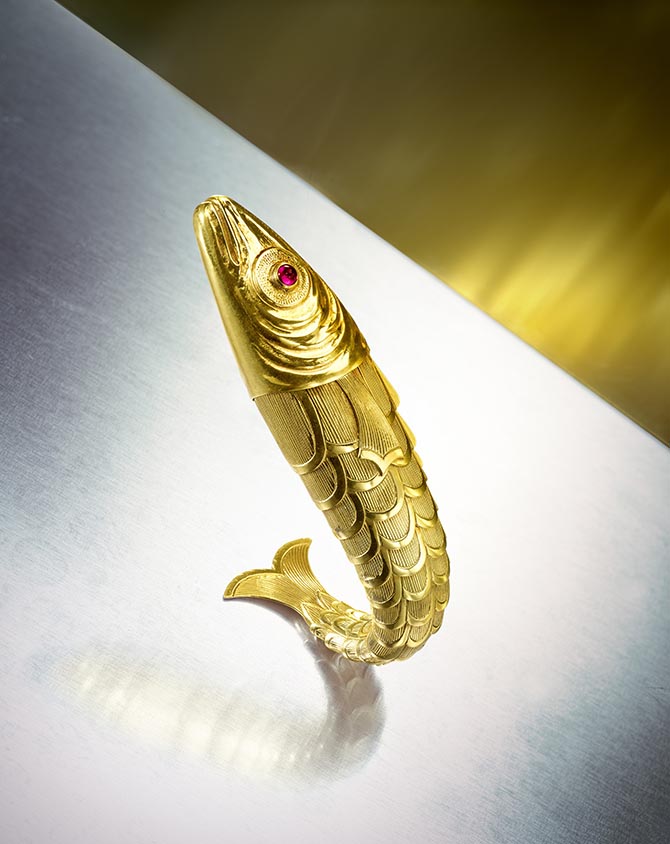 NEW YORK LOT 38 – A rare gold and gem-set lighter by JEAN SCHLUMBERGER, circa 1939

Prior to his relationship with Tiffany & Co., Jean Schlumberger shot to fame with his Poisson lighters: an articulated sardine with one sapphire and one ruby eye, whose head flips open to spark a flame. The design lit up the likes of Diana Vreeland and Kenneth Jay Lane, who donated his to the Met. This iteration was created around 1939 and comes from the collection of an anonymous seller who Brett O’Connor, Bonhams’ Senior International Jewelry Director, tells us is “a great New York socialite.” 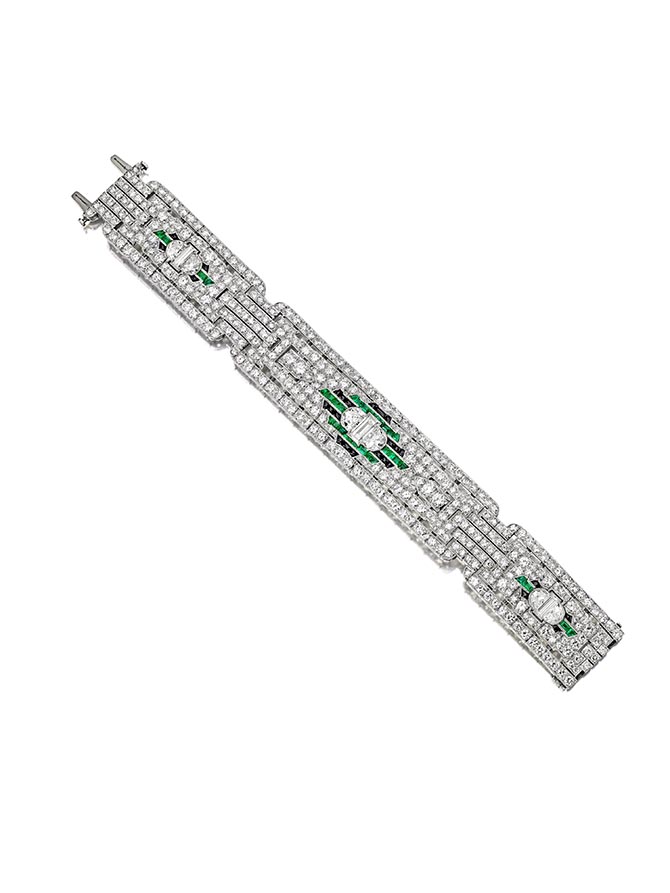 This dazzling bracelet is a fine example of designs from Art Deco’s later years, when color began creeping in. It has all the marks of classic Deco — a sleek, geometric pattern in monochromatic white diamonds and platinum — accented with calibré-cut, buff-top emeralds and onyx. A classic rendered par excellence. 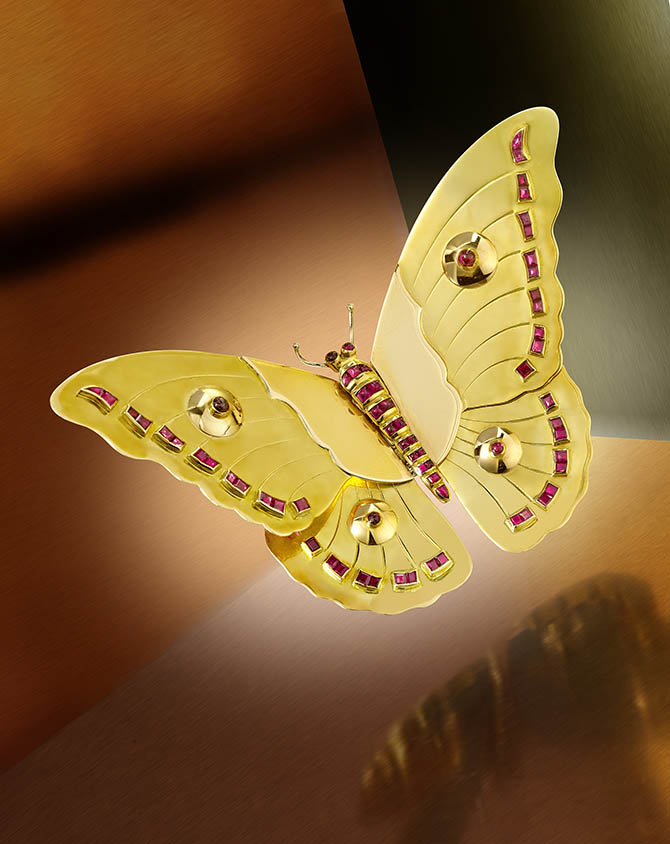 More than just a fanciful flourish, Van Cleef & Arpels began producing their signature butterflies in the years between World War I and World War II as a symbol of hope and freedom. Materials at the time were scarce, which led to designs like this articulated brooch from around 1940. “It’s very sort of somber,” O’Connor notes. “Platinum was a very strategic metal [at the time] and you didn’t want big, boisterous jewels.” The result, in polished and scored gold with rubies, feels strikingly fresh today. 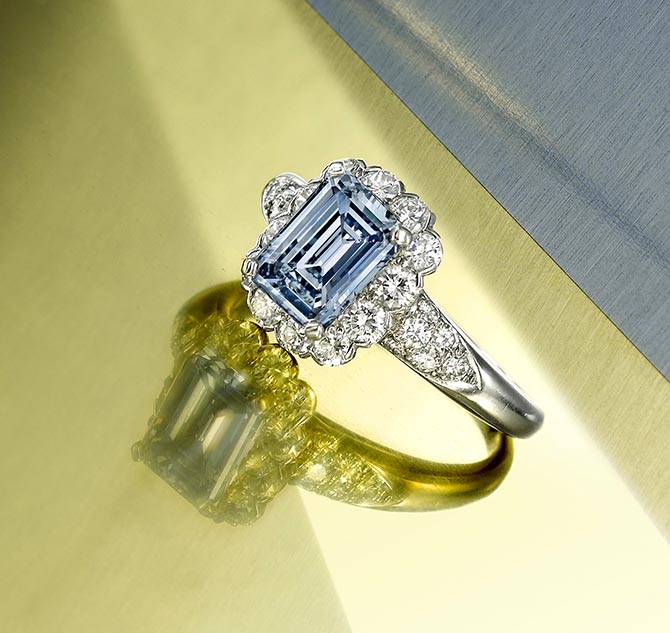 The top lot in the New York sale is another Van Cleef stunner centered around an exceptional blue diamond. Fancy colored diamonds are the most valuable gems in the world and blues are among the rarest of the rare. This one weighs in at 2.17 carats and boasts a grading of Fancy Intense Blue color and VVS2 clarity. The sky-blue hue is mesmerizing as it is but O’Connor notes that it could be re-cut to achieve an even more intense Vivid Blue. “It’s a beautiful, beautiful stone. I hope that doesn’t happen and it goes to an end user.”

From the Archives: Katherine Domyan’s Glamorous Jewels at Bonhams

From the Archives: A Stylish Collection of David Webb at Bonhams