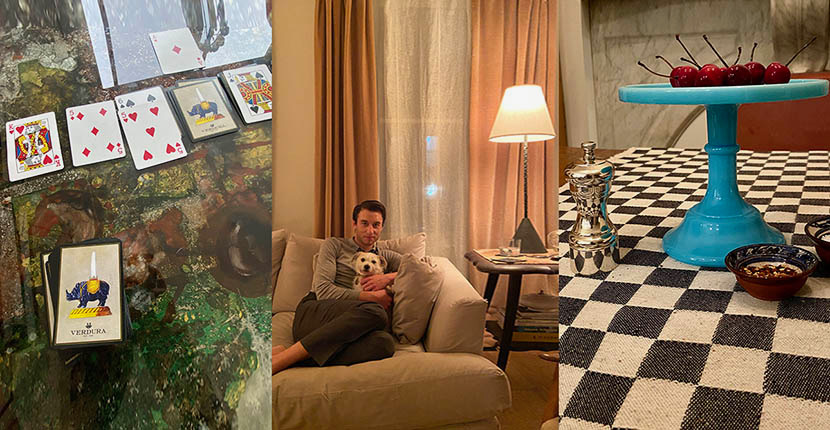 Adventurine contributor Kareem Rashed with his dog Bravo at home in Brooklyn, flanked by Verdura cards and the silver-plated pepper mill he picked up pre-lockdown. Photo Kareem Rashed

Our contributor and Robb Report Style Editor has been figuring out Zoom, playing cards and cooking

Working from home in Brooklyn over the past few years, my relationship with the city shifted. I got to see a different side of New York—a slower, quieter, neighborly city—that I’d largely missed in my previous ten years living here and running around town, perpetually ten minutes late to my next commitment. It’s a New York I’ve come to love as much as the New York of go-go energy. Ironically, I started a new job, rejoining the rat race and re-entering 9-to-5 office life, the week that NYC began shutting down. As it turned out, I only got two days in the office. I’m grateful to have had those two days, though—even grateful for those anxiety-riddled rush hour subway commutes when coronavirus was just a looming threat—to soak up some of New York’s effervescence before it went still.

In those early days, everything was a question. Do I tell the friends that were coming over for drinks on Friday that they’d better stay home? Should I get a carton, or three, of wine in case the liquor store shutters? It was actually texting with my friend Bea Bongiasca, who had already been living through Italy’s lockdown, that gave me some clarity: don’t freak out over essentials, those will always be available, it’s the non-essentials that’ll be harder to come by. So, I picked up my favorite scented candle, a silver-plated pepper mill I’d been eyeing (in my doomsday logic, I figured it is both a beautiful object that will spark joy and a practical tool) and girded myself for sheltering in place.

At first it was unclear whether this was a momentary pause or the start of something much bigger. With the announcement that restaurants must close, though, it got real. A few of my neighborhood canteens lined up bottles of liquor from their bars out on the sidewalk. What, at first glance, looked like an adults-only parody of lemonade stands had a more unsettling purpose: a frantic fire sale to make a few last bucks before the deadline to close up shop. It was just a matter of days—which felt like weeks—before the official stay-at-home order was issued.

Having worked from home well before #WFH, I’m used to days in relative isolation and enforcing structure upon myself. But it’s especially bizarre having your first months of a job transpire in isolation. My first impressions of co-workers, and theirs of me, have been made via Slack messages and Zoom meetings. My first work has been produced against the backdrop of a global crisis—particularly tricky when writing for a magazine that will be published three months from now. How do you speak to an audience in a world that will undoubtedly be different from the one you’re in? I don’t mean this to sound like whining: I feel incredibly lucky to be employed at a time when so many (including the boyfriend I’m isolating with) have lost their jobs. It just makes this time doubly confusing; it heightens the sense, which many of us of share, of living in an alternate universe where nothing is very clear.

Still, I’m grateful to be able to busy myself with work during the day. Even without the usual outings, my routine feels familiar. The day is broken up by walking my 2-year-old terrier rescue, Bravo, but even that can seem like traversing a miniature minefield. What’s the proper etiquette? Can he still sniff other dogs? What about that garbage bag? The few interactions I have on those walks are both more meaningful and more awkward. The usual small talk feels, well, small. But there has been a sense of understanding in the quiet nods exchanged—none of us quite know what to say, but the feeling is mutual. 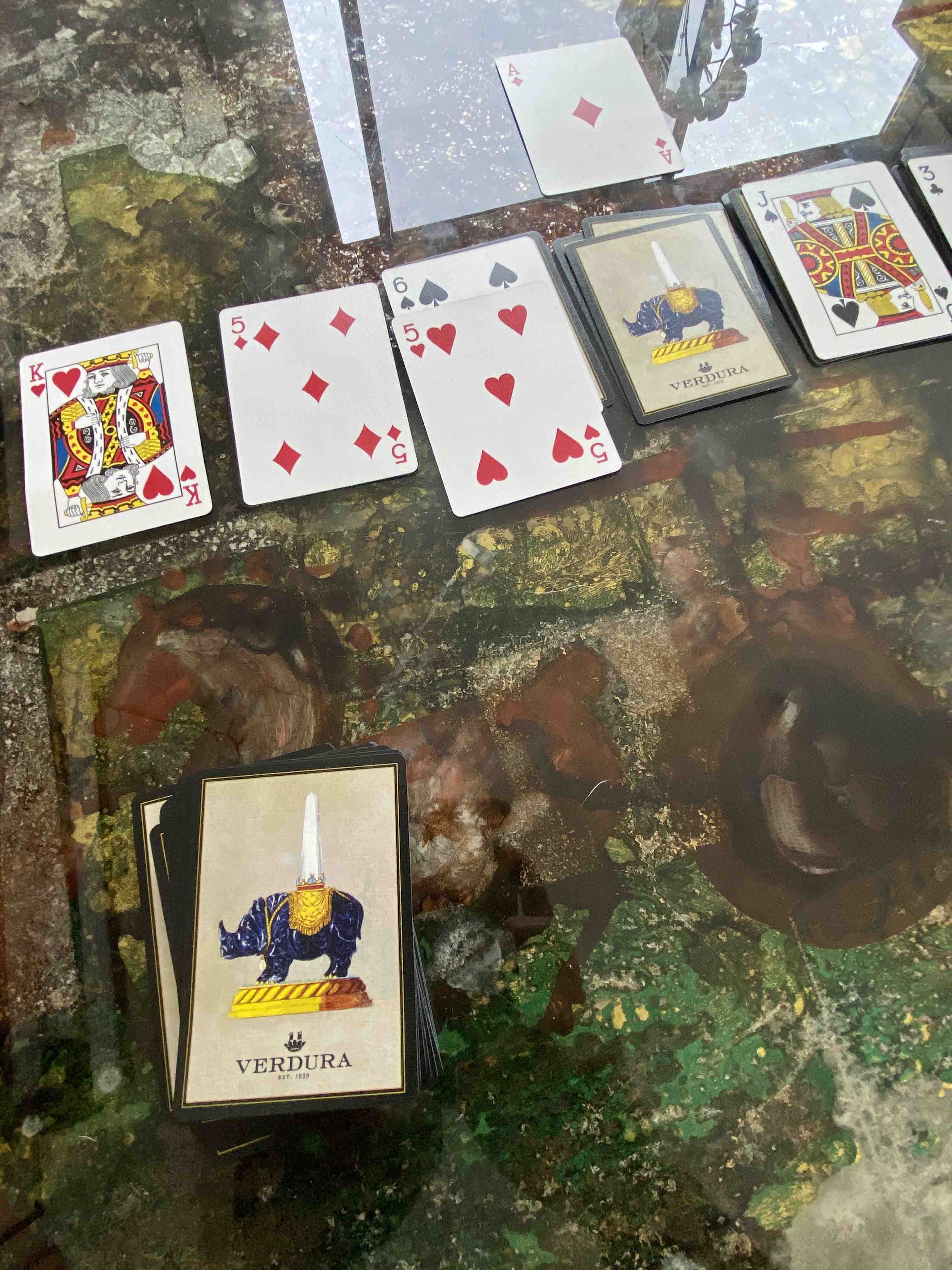 I’ve actually avoided cyber gatherings too, which has more to do with my lack of technological savvy than anything. Let’s just say that it wasn’t until after the first of my office’s virtual happy hours that I learned you are visible on Zoom even when you aren’t speaking (yes, I now realize how idiotic that sounds—I’m a bad millennial). Recalling how much preening I did while assuming I was safely out of view, the embarrassment is enough to turn me off Zoom entirely. Instead of Zoom raves and Master Class, I’ve enjoyed decidedly more old-school entertainment: solitaire (thanks to a deck of cards gifted by Verdura a couple years ago, which I appreciate more than ever), the New York Times crossword and rearranging furniture for the umpteenth time. At first, I enthusiastically threw myself into culinary endeavors but after a bastilla, three soufflés and god-knows-how-many pounds of lentils, I just fantasize about a sitting down for a set-menu meal where all I have to think about is what kind of gin I want in my martini. Call me Marie Antoinette, but couldn’t we all use some cake?

There are moments—when I hear the refrains of a song being blasted somewhere down the block or kids playing in the backyard of the house a few doors down—when everything seems entirely normal. It’s mostly when reading the news (I’ve limited myself to only looking when I get up in the morning and during my lunch break) that the staggering reality of the situation hits. I’ve found the best remedy to be a regimen of Fleetwood Mac, RuPaul’s Drag Race and mezcal. And, of course, the ritual of clapping at 7pm everyday is a powerful antidote to the isolation blues.

The nightly applause is particularly funny in my normally quiet corner of Brooklyn. Because the blocks surrounding me aren’t as densely populated as other parts of the city, one can single out the individual players. I will now forever know some neighbors as Mr. Clown Horn, Gong Guy and Lady Kazoo. In all seriousness, though, it has made me feel connected to my neighbors in a way that I never was before. In isolation, it’s easy to get caught up in the world within your own four walls…I certainly do. But the clapping is a reminder of all the lives that have always been unfolding around me—so many other New Yorkers I don’t know—and a reminder that we are all trudging through this, side by side.