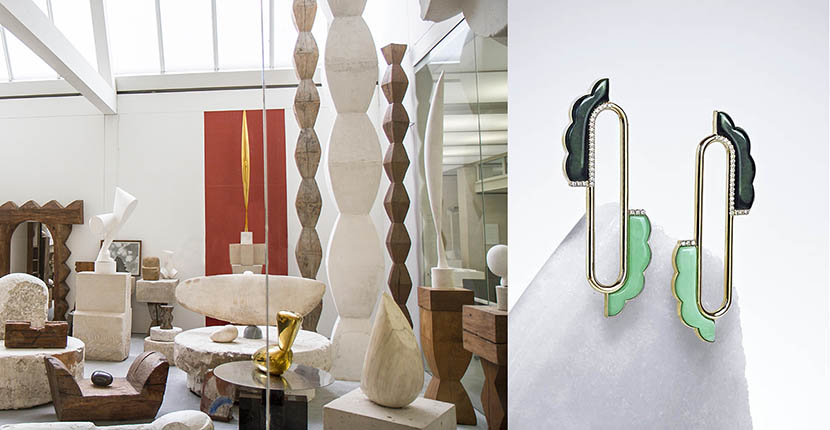 The Greek designer echoes the sculptor’s creations in her jewels

Ioanna Souflia is equally at ease carving marble as making jewelry accented with diamonds and gems. When the Greek designer puts the two together, they shed a new light on her forward-thinking wearable art.

Ioanna who launched her line in 2015, did not set out to be a jewelry designer. “While studying for exams, during my training as a lawyer, I felt a restless energy that could not be channeled into the field of Law,” she remembers.  Everything began as a relationship between my hands and objects that I had at my disposal. I translated them into jewelry.” This, eventually, led her to the doors of Central Saint Martins, in London, where she studied ‘Jewellery Design.’

Many of her creations, found in the Symbiosis, Adoucissement, Adieu collections, are tricked out in marble and, occasionally, accented with diamonds. She has, however, gravitated towards colored stones with Blueprint, Marble pour Homme (a collaboration on unisex cufflinks with fellow jeweler Yannis Sergakis) and her newest line Atelier. 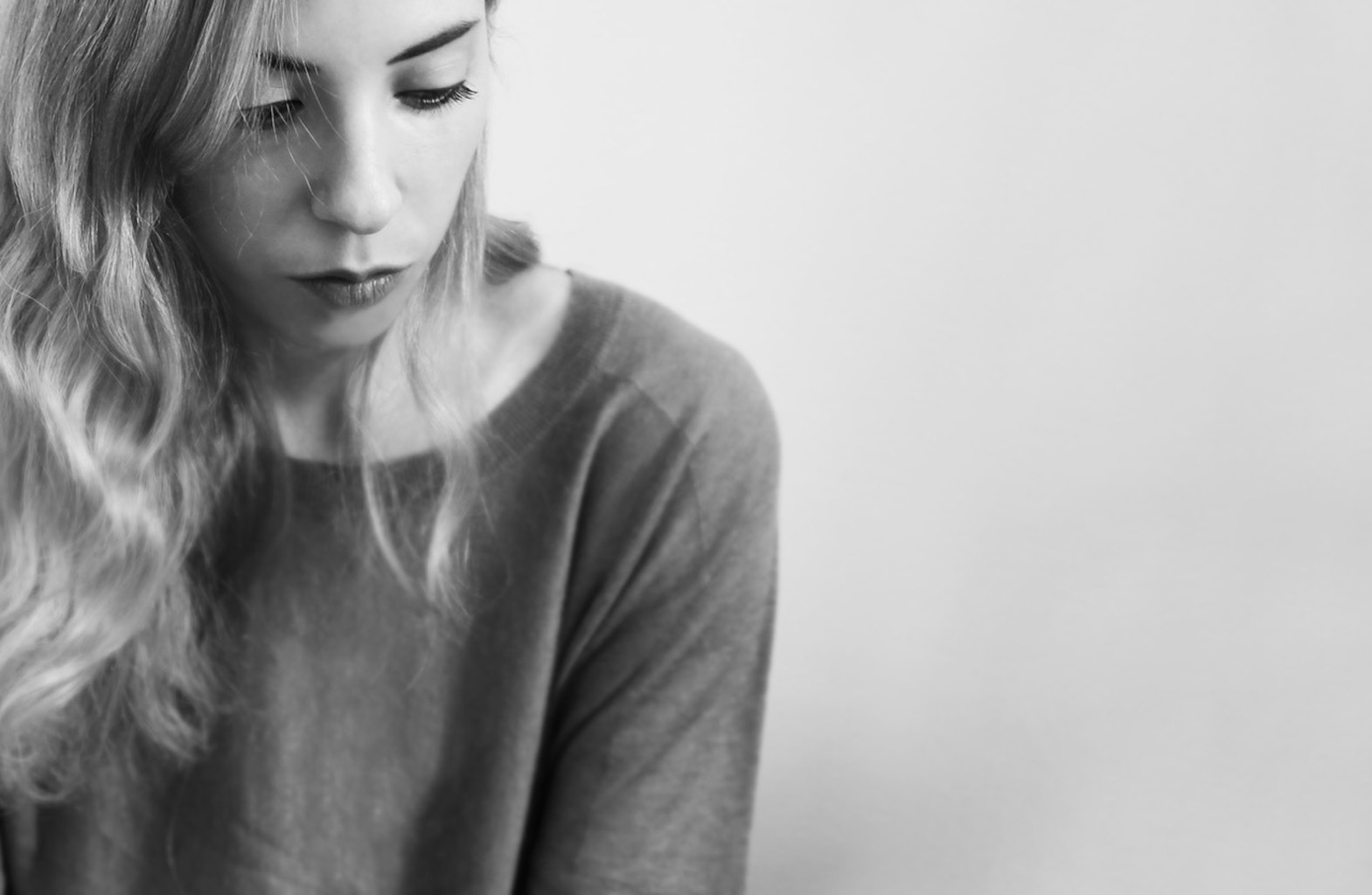 Ioanna Souflia’s Atelier is an impassioned dialogue with Constantin Brâncuși’s works; one that is deeply engaging: inspired by the Romanian sculptor’s forms, the eleven pieces of this collection deploy artfully her “interpretation and takeaways” from the select works of the modern artist who was active in Paris during the first half of the 20th century. “What I wish to ultimately convey is my idea of femininity, graceful and dominant, direct yet complex, bold in all its distinct attributes,” says Ioanna, whose first series has a mix of earrings and rings that encompass the sculptural element, the play on symmetry and highlight the harmonious fusion of materials.

Ioanna Souflia, who spends her time between Paris and Greece, answered all my questions about her fascination with Brâncuși’s sculptures. Read on to find out all about it. 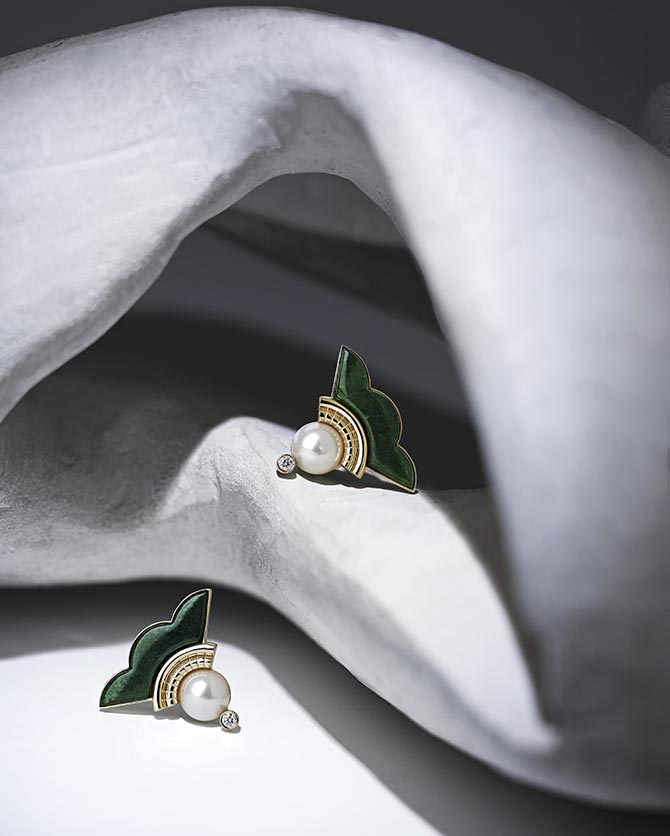 How did you come by Timidity and YoungBird pedestal by Brâncuși?

Constantin Brâncuși, as a master sculptor, has always been a key influence in my aesthetic. I have visited his atelier in Centre Pompidou in Paris countless times and the idea of creating a collection influenced by his work has been in my mind for a long time.

What about these sculptures fascinated you the most?

In its entity, Brâncuși’s work always captivated me with its powerful forms, the effortless mixture of materials, its dominant presence. I was drawn to the purity of forms of the chosen works and the complexity of their interpretation. In both works I recognized a feminine shape with repetitive sculpted curves, that are given a stoic, rigid character with abruptly flat surfaces and finishes. Both Timidity and the wooden pedestal of Young Bird, introduce a semi-circular form used as a pattern, following a contrasting design principal; symmetrical and asymmetrical. There is a balance between the flirtatious and the demure, a hint of duality and contrast, the presence of the androgynous, all elements that fascinate me and inform my own work. 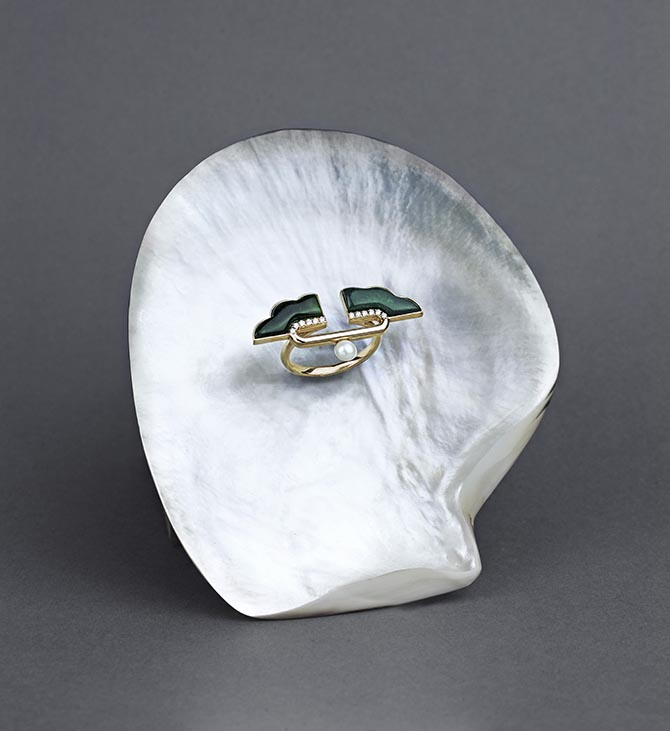 What does the collection’s name Atelier signify?

Brâncuși considered his studio a work of art in its own merit, a body consisting of cells that all generated each other. He would revise the positions of his sculptures and focus on their relationship with the studio. This perspective of his work felt appropriate for a collection where each piece has a personality of its own, but at the same time acquires a new character when worn alongside other pieces. While designing the pieces, especially the rings, I considered their coexistence on the hand and how different stories could be told depending on the spatial relationships between them. ‘Atelier’ is a reference to how the artist looks at the body of his work.

You have used Chrysoprase and Chromium Chalcedony to exemplify the jewelry. What inspired the choice?

For the first time in this collection, I introduce the use of yellow gold as well as the use of color. In the first eleven pieces of ‘Atelier,’ there is an evident graphic element alongside a repetitive sculptural form inspired by the sculptor’s shapes. While aiming to highlight the Brancusi inspired shape and explore the many components of color, hue, tone, saturation, I chose to use Chrysoprase and Chromium Chalcedony. Two stunning natural stones that present a different variation of the color green, complimenting each other. 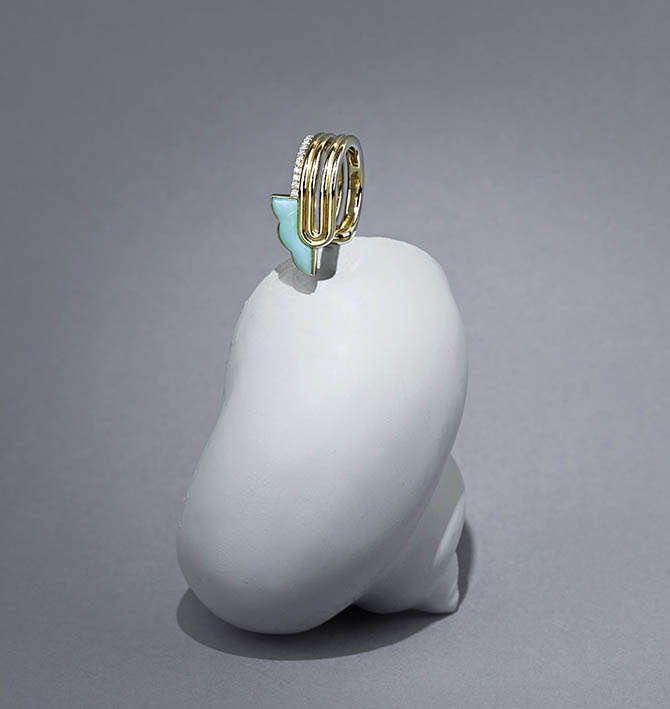 You have always hand-carved marbles for your previous collections. Did you perchance cut these stones?

I wanted ‘Atelier,’ as my previous collections did, to have the unique element of custom cut stones, and to offer my clients pieces with high quality craftmanship but contrary to the previous collections where the marble was hand carved by me, all the stones for ‘Atelier’ were cut by a stone-cutter in Greece.

Contemporary Desginer’s At Masterpiece in London

The New Collection By Nikos Koulis Is Amazing