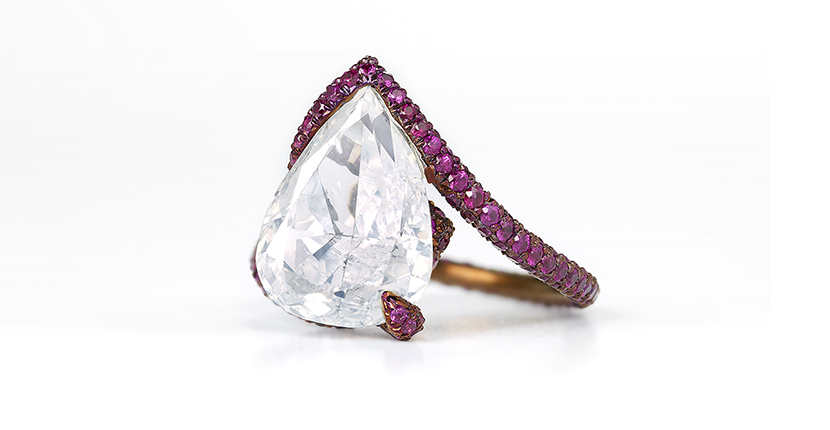 New Diamonds For The Renovated Ritz

Everything about the renovated Ritz hotel in Paris is luxurious.  There is even splendor in the passageway connecting the Place Vendôme and the rue Cambon.  One side of the sumptuous space, officially named The Gallery of the Ritz, has windows facing the Grand Jardin.  The other side features magnificent vitrines sparkling with treasures from some of the most coveted names in jewelry.  Suzanne Syz’s creative work is part of the splendor.

The Swiss born designer who was educated in Paris trained her eye in New York during the 1980s.  Suzanne became inspired by the artistic vision of painters, Andy Warhol, Jean-Michel Basquiat and Julian Schnabel among others who she was introduced to by her friend, the celebrated gallerist Bruno Bischofberger.  Suzanne transforms the creative spirit of the modern masters into jewelry by making each piece one-of-kind and choosing unexpected gems and sculptural silhouettes. 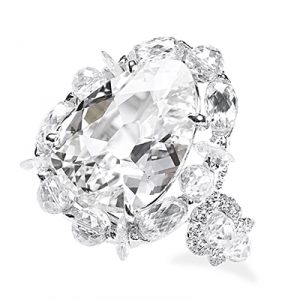 In a spin on that old saw, a diamond as big as The Ritz, Suzanne has presented creative new diamonds at the renovated hotel.  The 4.46-carat pear shape gem set in ring with an asymmetrical pink sapphire design (above) may look a little traditional at first glance but it has an uncommon radiance.  “The fluorescence of this diamond and the way it has a milky glow make it an intriguing stone for me,” explains the designer.  It was a must-have for one of Syz’s clients who purchased it as soon as it was completed.  “The collectors have graciously allowed me to keep the ring on view at The Ritz in my opening month.”   A loan that lends a museum quality to the display.

Another one of Syz’s unusual diamonds on display just for display (in other words it has been purchased) features a 5.69-carat modern old mine-cut diamond.  The grade of the stone is just about as good as it gets in gemology.  It is a D-color, Internally Flawless, Type IIA.  “Above all else though, the cut is what attracted me to it most,” says Suzanne.  “The old mine cut provides incredible personality to the diamond.  To compliment it, I set it with diamonds in a variety of shapes including discs, briolettes, and beads. I wanted it to appear classic, but upon a closer look incredibly contemporary.”   A description that could sum up the gem’s temporary home at the renovated Ritz in Paris.