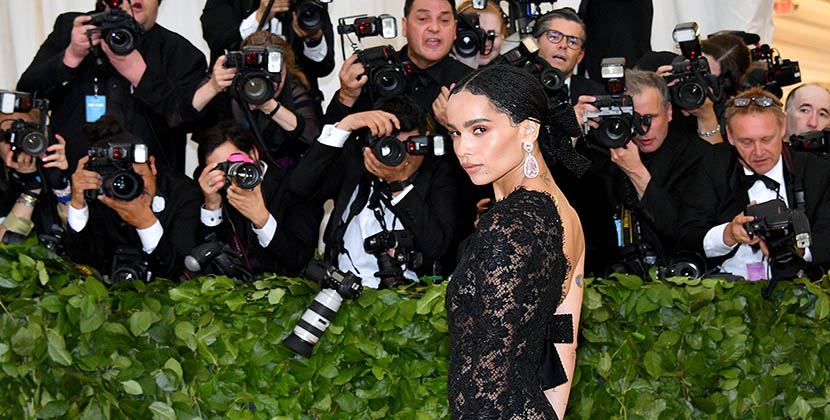 Zoë Kravitz on the red carpet at the 2018 MET Gala in May wearing her engagement ring as well as earrings form Jacob & Co. and a Yves Saint Laurent gown. Photo Getty

Zoë Kravitz’s engagement ring story is shocking. No, I am not talking about the fact that she found the vintage design of her dreams on Instagram. It is pretty standard operating procedure to shop for jewelry that way nowadays and I am going to get into the details in a moment. What I am shook by is that the star was wearing the ring for months and nobody noticed. At least no one in the press. And Zoë wasn’t hiding it.

The first time she wore the engagement ring for all to see was at the 2018 MET Gala on May 7. Just look at all the cameras she wore it in front of in the photo below. It’s right there. I can only chalk up the oversight from all, including yours truly, to the fact that the star was also wearing some blindingly beautiful diamond earrings from Jacob & Co. set with over 200-carats of pink Kunzite. Anyway, Zoë continued to wear her ring (obviously) and everyone continued not to notice (shockingly). 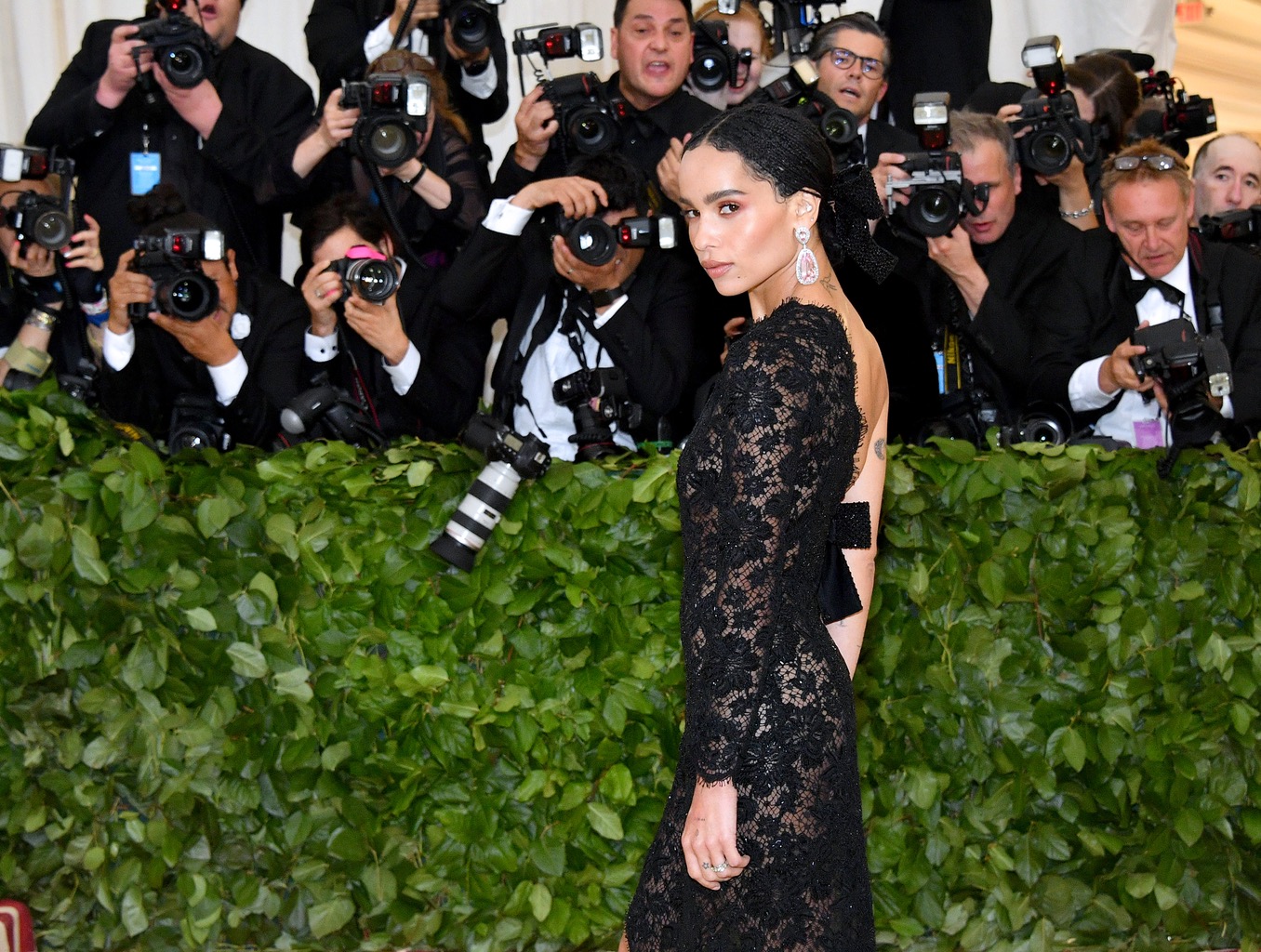 Zoë Kravitz on the red carpet at the 2018 MET Gala in May wearing her engagement ring as well as earrings form Jacob & Co. and a Yves Saint Laurent gown. Photo Getty

The news finally broke officially when the Rolling Stone reporter Josh Eells, who was interviewing the star for a November cover story, spotted the jewel. “Oh yeah, I’m engaged,” she told him so casually he assumed she was joking. “No, I’m engaged!” she repeated. “I haven’t told anyone yet — I mean, I haven’t told the world. I wanted to keep it private.”

After the Rolling Stone reveal, the press naturally wanted to know more about Zoë’s engagement to her long-time boyfriend, actor Karl Glusman. She has continued to share the details in her totally laid back and refreshingly transparent way. For a November 16 story in W magazine, she explained how the ring was one, “I’d been kind of fawning over from afar, and a friend of mine of whispered that into Karl’s ear. It’s from this antique dealer called The One I Love; I follow her on Instagram and would always look at her rings. There was one from the 18th century that I saved because I thought it was so beautiful, and I had no idea that my friend had told him about. So, he went the extra mile to get me something that I’d really love.” 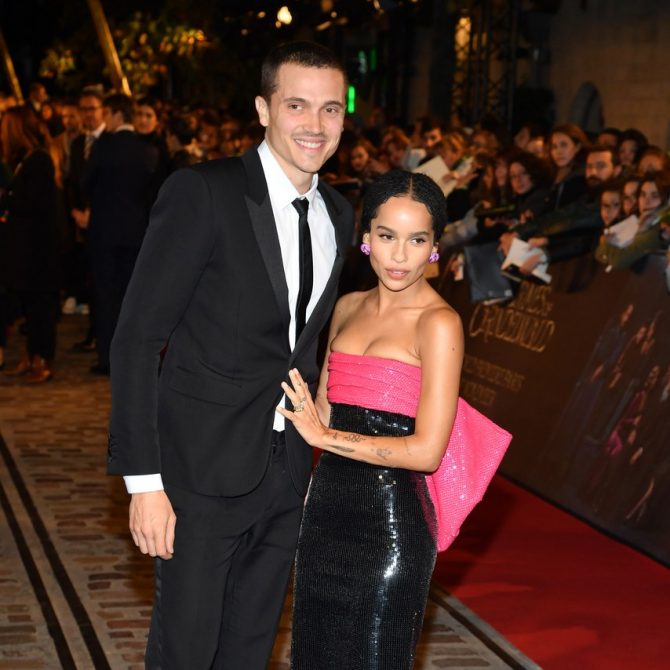 On November 8, Zoë Kravitz posed with her fiancé Karl Glusman while wearing her vintage engagement ring from The One I Love at the ‘Fantastic Beasts: The Crimes Of Grindelwald’ World Premiere in Paris. Photo Getty

The founder of The One I Love, Mia Moross, says the exchange with Karl began in email and was, well, as laid back as the tone Zoë has expressed in all her interviews. “Once they were engaged Zoë called and said she loved it,” explains Mia. “They are really sweet kind people.”

As for the details of the ring itself, Mia says “It was just the best treasure to find.” It is an 18th century Georgian silver topped gold half-loop ring with rose-cut diamonds in a foil back setting. During the age of candle light when the jewel was created, the diamonds were cut by hand with facets all over the rounded top. The bottom of the gems are flat and in a closed setting described as “foil” but actually Mia explains, “it’s like a silver or a silver flake, not foil as we think of it today.” 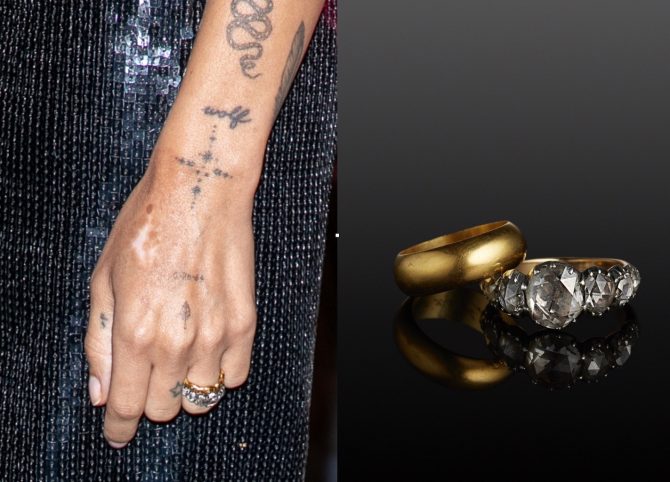 While selling jewels on Instagram may sound novel to some, it is routine for Mia. She founded The One I Love, named after the REM song, in 2013 after getting her graduate degree in social work at New York University. “I loved the history of jewelry and started working with it as a hobby,” Mia explains. “Then the business boomed quickly through Instagram.” Today, Mia regularly works with private clients and helps them find the ring of their dreams in real life as well as on the social media network.