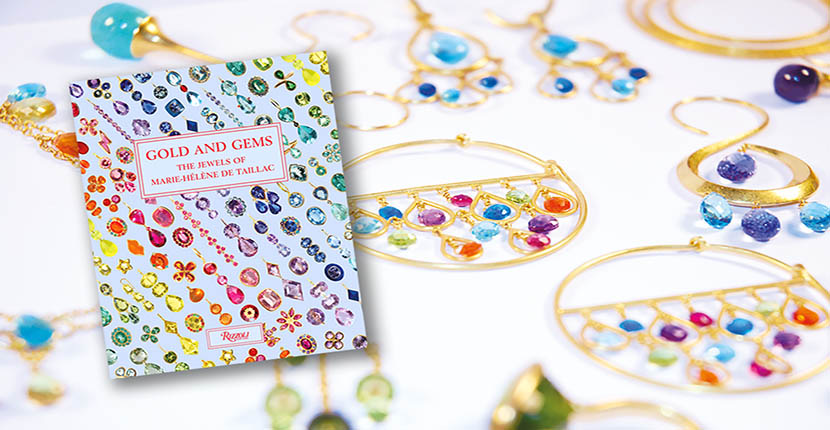 Book cover of 'Gold and Gems: The Jewels of Marie-Hélène de Taillac' inset on an image of jewels by the designer. Photo courtesy

A visit with Marie-Hélène de Taillac is always a dreamy experience. Her colorful jewels set with a rainbow of semiprecious stones in rich yellow gold are like designs from some incredibly chic fairytale. Her jewel box of a boutique on the Upper Eastside of Manhattan has the spirit of the Marie Antoinette movie directed by Sofia Coppola. But imagine the ill-fated queen had Verner Panton 1960s furniture and recovered it in custom velvet upholstery in the sweet colors of Ladurée macaroons. And she boldly reimagined a 1961 plexiglass Yves Klein table by removing the artist’s original royal blue pigment inside the clear box and replacing it with 46,000-carats of aquamarines. It is impossible not to be transported by a visit to the boutique. (The designer also has small stores in Paris and Tokyo.) The atmosphere makes you wonder about the life story behind all the creativity.

While I have sat down with Marie-Hélène several times in New York, we have never quite gotten around to the subject. Our expansive conversations tend to focus on the collection at hand, as well as a soupçon of thoughts on the world at large. Well, now my questions about her background have been answered by six authors in a Rizzoli monograph, Gold and Gems: The Jewels of Marie-Hélène de Taillac. The writers include the Fashion Director and Chief Fashion Critic at The New York Times, Vanessa Friedman, illustrator Jean-Philippe Delhomme, model and style icon Ines de la Fressange, Vogue’s European Editor-at-Large Hamish Bowles, historian Eric Deroo and writer Nathalie Rykiel. 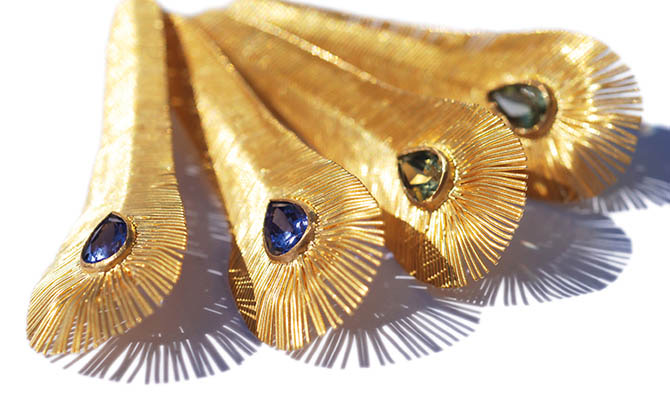 Each and every one of these people has a dreamy expression in the tone of their essays. Marie-Hélène inspires it. They review her adventurous life and her wanderlust that led the Parisian, who was born in Beirut, around the world. There was an episode in London where she worked for an English jeweler and fell in love with the field. Then a solo trip to Asia with a stop in Jaipur where she walked into Gem Palace and from that moment there was no turning back. Her life was going to involve jewelry design.

Marie-Hélène launched her collection in 1996 when there were far fewer contemporary designers in the market. She has never wavered from the independent spirit of her vision over the years. Her story is a pleasure to read six times over in the essays by her friends. Gold and Gems is a wonderful addition to anyone’s library who is interested in contemporary jewels and the story of a designer’s integrity, talent and love of beauty, not to mention how to remain true yourself, even in an increasingly complex world. 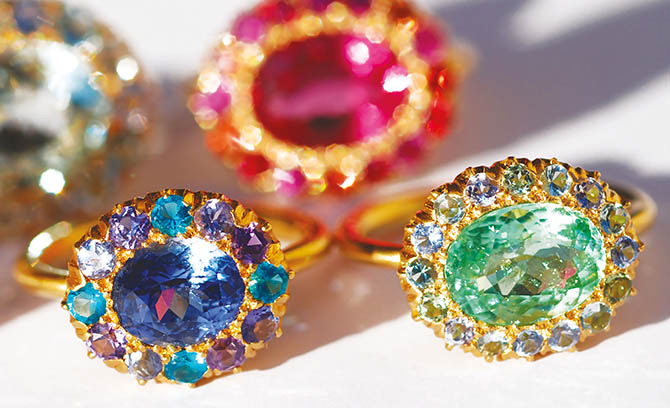 A New Book Covers Jewelry Terms From A to Z