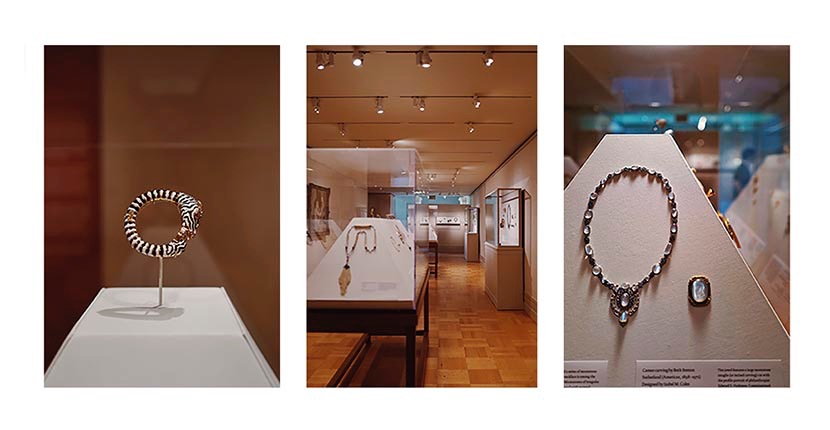 In the exhibition, Jewelry for America, currently on view at the Metropolitan Museum of Art, 300 years of American jewelry design and innovation is on display until April 5th 2020. The exhibition is vast in its era-spanning scope, but the unifying and very American theme repeatedly comes back to “absorption and reinterpretation,” as stated in the opening wall text. The American melting pot metaphor rings true once again, and walking through this show allows one to understand the breadth and depth that American jewelry truly has. The curator of the exhibition, Beth Carver Wees, the Ruth Bigelow Wriston Curator of American Decorative Arts at the Met, has segmented the exhibition into five sections: Sentimental Journey, American Industry, Fin de Siècle Brilliance, Nature and History as Inspiration, and finally Creativity and Innovation. The exhibition is housed in a flowing gallery space just off the Henry R. Luce Center for the Study of American Art in the American Wing, and is a bit of a follow-up to the sweeping jewelry exhibition the Met mounted in November of 2018, Jewelry: The Body Transformed.

In Jewelry: The Body Transformed, there were 16 curatorial departments vying for space and attention, and a handful of curators putting forth their many different and perhaps disparate voices on what jewelry is, and how it functions in society throughout various periods and cultures. In Jewelry for America, the Met seems to have course-corrected by staying small and concentrated. True, Jewelry for America is a much smaller exhibition, but the level of focus it provides for an in-depth and specific topic is much appreciated. A visitor can come through the gallery and grasp that throughout the centuries of American jewelry making, there were many impetuses that influenced design. 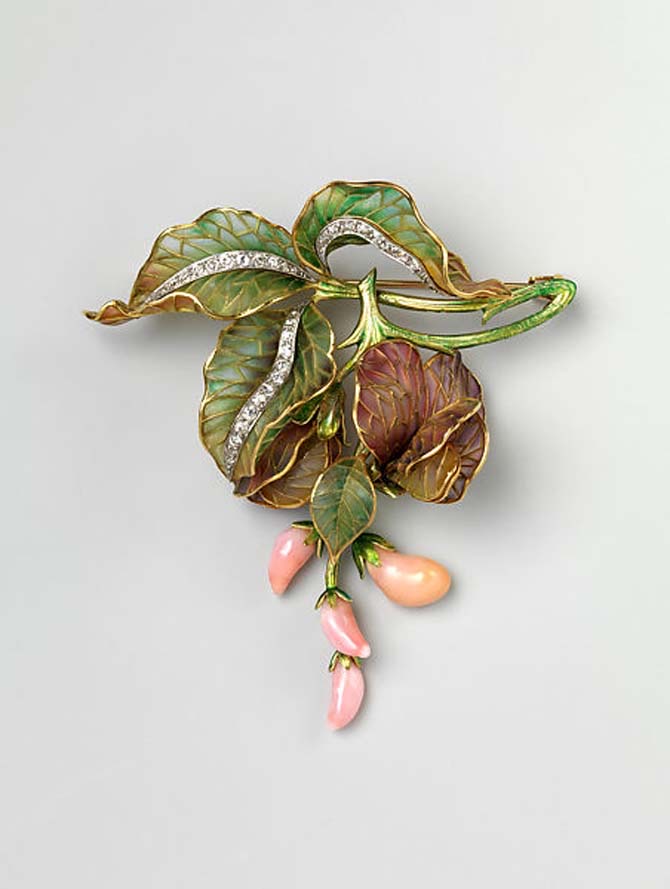 The exhibition is organized roughly chronologically, and the earliest jewels on display are thematically sentimental. There are portrait miniatures of General George Washington on rings, protective coral jewelry for children, and mourning jewelry with braided hair incorporated into brooches and earrings. One of my favorite early American jewels is the coach cover earrings from the “American Industry” section. They are dangling diamond earrings from 1882-85, complete with a black enameled gold sphere that snaps on over the diamond in order to make a glittering gem a bit more common-place while traveling via coach, so as to not attract the eyes of a would-be thief. 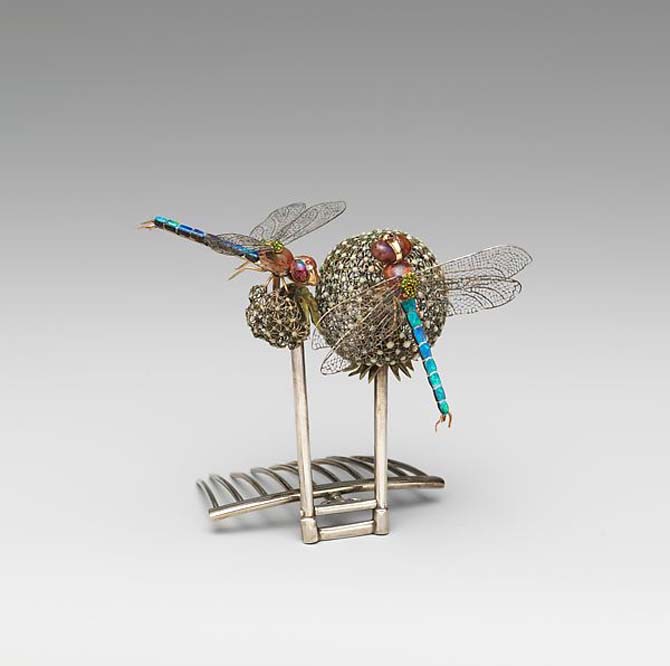 Louis Comfort Tiffany is well represented, as are many Aesthetic and Arts & Crafts era jewelers like Marie Zimmermann, Marcus & Co., and Florence Koehler. There are also 20th century masters of New York, such as an ivory maltese cross cuff by Fulco di Verdura, and a newly acquired enameled zebra bracelet by David Webb. I was overjoyed to see the work of Art Smith, a gay African American art jeweler from the mid-century prominently displayed next to the likes of Alexander Calder.

Another brand new acquisition comes from Daniel Brush, and was acquired by the museum during Jewelry: The Body Transformed. Much like the David Webb zebra bracelet, there seems to be a bit of a problem when it comes to the museum acquiring new jewelry; the American Wing, which definitely has curators invested in and knowledgeable about jewelry, is limited in its ability to collect any object that was made beyond World War I. Both the David Webb zebra and the Daniel Brush necklace had to be acquired by the Modern and Contemporary department, which is a department that largely has eyes only for painting and sculpture. Let’s hope the wide swathe of 20th and 21st century American jewelry that could be acquired by the museum is able to be pushed through this department, or that the American Wing can one day find exceptions for collecting when it comes to jewelry. It would be a shame for other acquisitions to be shunned merely because the curators in the Modern and Contemporary department haven’t broadened their definitions of modern art to include fine jewelry and other decorative arts. 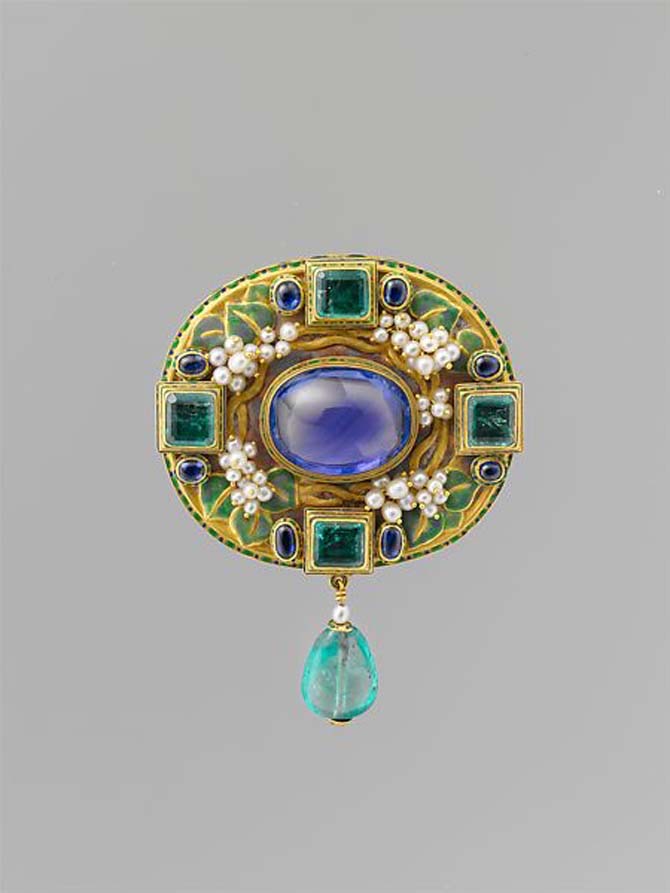 All in all, Jewelry for America is another jewelry focused exhibition that has happily followed swiftly in the footsteps of Jewelry: The Body Transformed. Hopefully this means that the Met has found a firm foothold in the public’s interest in jewelry focused exhibitions, and the breadth of departments throughout the museum might soon see other niche exhibits taking place. One might even go so far as to hope that this trend could ultimately point toward the Met taking the initiative to fund a curatorial department and gallery dedicated specifically to jewelry, much like the Museum of Fine Arts in Boston, which is the only US museum with a gallery and curatorship devoted to the jeweled arts.

Bonham Carter Wears Her Own Jewels In ‘The Crown’

The Gold Wreath of A New York Suffragist