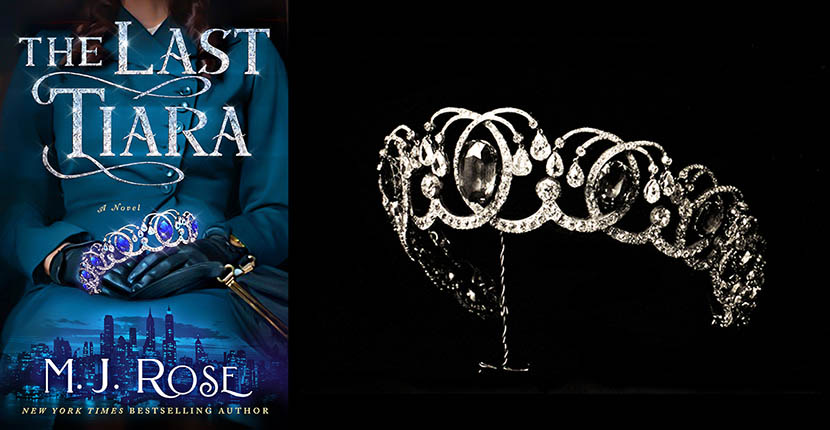 'The Last Tiara' by M.J. Rose and the missing Russian jewel that inspired the book. Photo courtesy and USGS

M.J. Rose tells the back story of the Russian jewel that inspired her novel

Sometimes you get birthday presents when you don’t expect them. On my birthday in December of 2012, I stumbled upon an NPR article entitled “The Mysterious Disappearance Of The Russian Crown Jewels.”

I was hooked by the first sentence.

“The story of the missing Russian crown jewels begins, as so many great adventures do, in a library.”

The article describes how, in the rare book room of the U.S. Geological Survey Library in Reston, Virginia, a previously unknown and unmarked 1922 catalog of photographs of the Russian Crown jewels had been discovered. 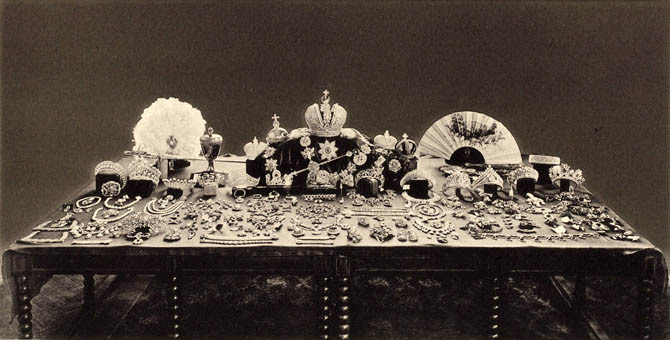 After the 1917 revolution, Russia’s new rulers debated what to do with the crown jewels. This 1925 image shows the Russia Crown jewelry collection. However, a 1922 album at the U.S. Geological Survey includes four items that are not described in the official 1925 inventory. Photo USGS

Almost all the photographs inside the 1922 book matched up with the well know official 1925 Fersman catalog of Russian Royal jewels.

Four pieces were missing in the 1925 catalog.

Why were photographs of those four pieces included in the 1922 book but not in the 1925 catalog?

To date, no one knows what happened.

USGS video reviewing the discrepancies between the 1922 book and the 1925 catalog.

I was captivated. What a perfect set up for a novel, titled The Last Tiara, I thought. How could a tiara of such great importance possibly go missing? What was the mystery behind its disappearance?

And so began my long and fascinating research into the Romanov Jewels, the Russian Revolution, and the history of tiaras with the help of many historians and experts, including and especially Rose Tozer, Senior Librarian at the GIA. 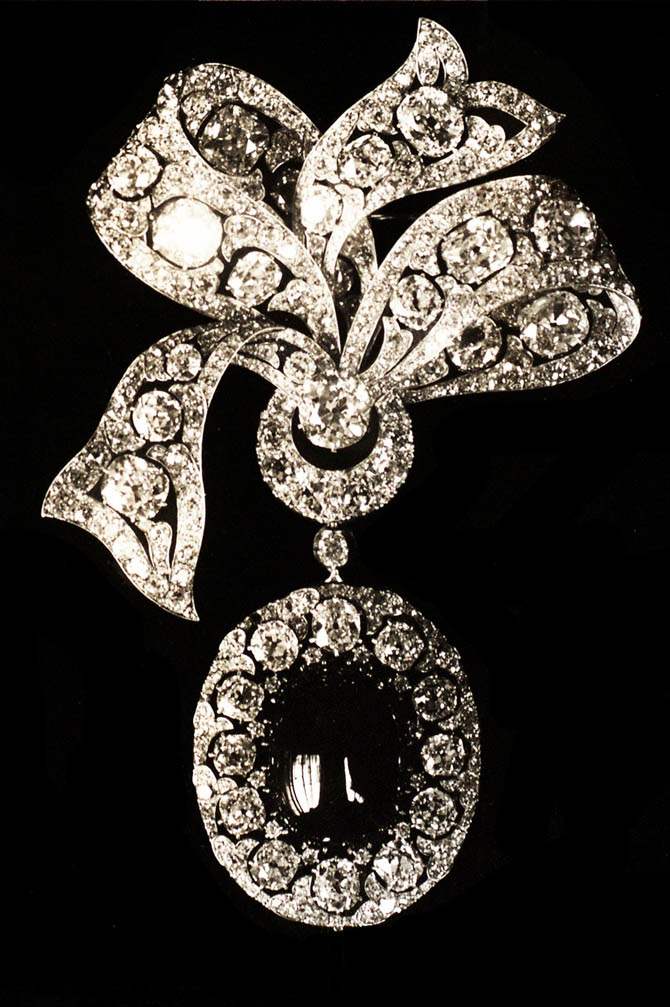 The brooch from the Russian Crown jewels that appeared in the 1992 book but was missing from the 1925 catalog. It surfaced at auction in 1927. Photo USGS

As I read about Russia of 1917 I learned about the terrible poverty, hunger, and desperation of the period. The black market thrived.

Starving to death, a man bartered his wife’s mink coat for a bag of flour. A grandmother traded a sterling silver samovar for sack of potatoes. A young mother gave up her only bottle of perfume for kindling fire.

If you had fine jewelry to sell, I realized, you might even be able to bribe a police officer and get your lover out of jail or buy passage out of Russia. 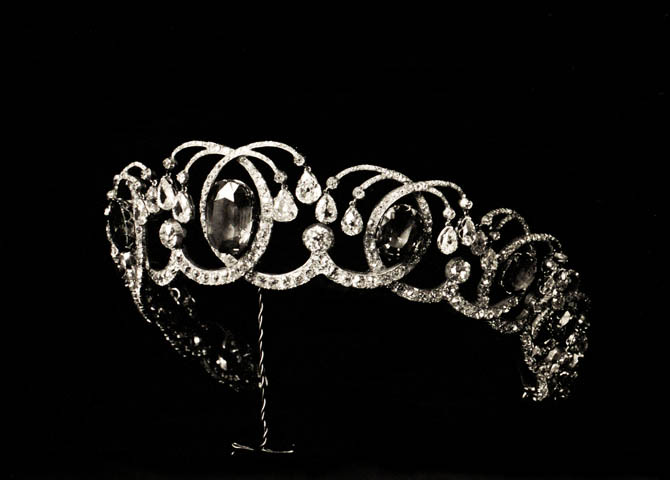 The Last Tiara appear in a 1922 album called “Russian Diamond Fund.” It was one of the four undocumented Russian Crown Jewels. Photo USGS

Here is how I describe the main character in my novel, Isobelle Moon, discovering the tiara in her late mother’s effects.

It’s 1948. Isobelle, an architect, is renovating her mother’s apartment. In a niche in the bedroom wall, she finds a rounded leather box about eight or nine inches long and five inches high and receipts from a jeweler for a dozen diamonds of various sizes. This discovery will put Isobelle on a path to learn the tiara’s fate and offer clues to her parents’ hidden past.

I get a knife from a drawer and gently work the box’s hinge, careful not to damage it. After a few moments, I feel it give. I lift the lid, not expecting to find anything at all. The inside is lined in cream-colored silk, and sitting in a half-circle depression is a piece of open-work metal.

I’m not sure what I’m looking at. Lifting it out, I turn it one way and then the other. I run my finger over the lacework of what appears to be silver and feel tiny metal points sticking up. One is sharp enough to scratch my skin, and a tiny drop of blood beads on the surface. I put my finger into my mouth. I realize the points must be prongs, pried up to remove stones, but no one bothered to push them back down.

I don’t understand. Why did my mother keep this skeleton once she sold the diamonds it held? What good was the silver frame? Why did it mean so much to her that she’d kept this remnant? And if it had meant so much, why had she sold it at all? 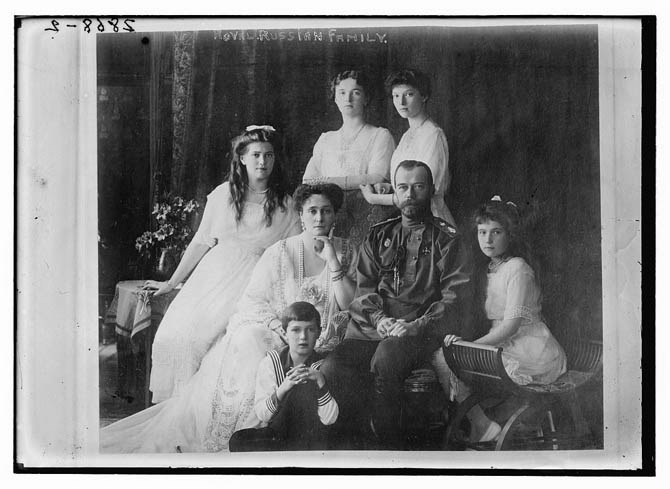 One of the most fascinating aspects of writing historical fiction, for me, is finding small mysteries hidden in a suitcase or letters or in the pages of an old catalog or a torn photograph with faded lettering on the back and letting my imagination run with it.

In The Last Tiara, my imagination runs from Russia in 1917 to New York City in 1948 as I explore a mother and daughter relationship, a hidden treasure, and a long lost love as I bring my own bittersweet resolution to a century old mystery.

On February 24th, at noon, Marion Fasel and I are going to be reviewing this very subject for a GemX talk titled, “The History, Mystery, and Allure of Tiaras.” The Romanov tiara will be the jumping off point for a fun and far-reaching conversation reviewing the meaning of royal tiaras as well as the fascinating tiara designs made by the likes of Lalique, Cartier and Calder among others.

Jewelry Designers and Influencers on Talismans

Lust: The Secret Language of Flowers In Jewelry