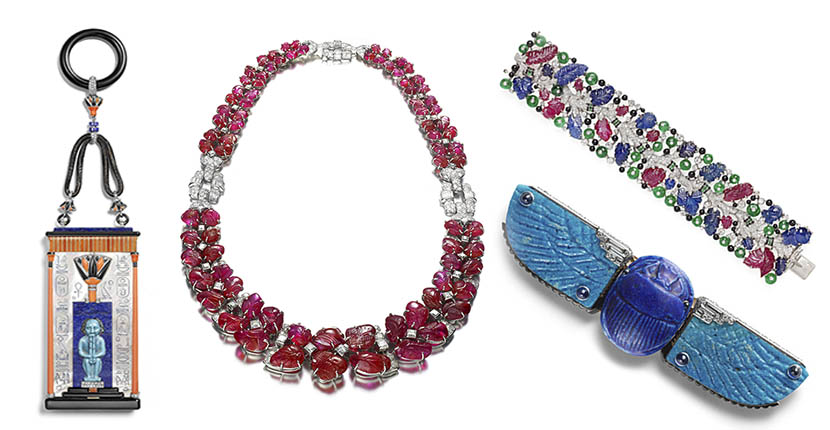 There are lots of bejeweled treasures in the Cooper Hewitt exhibit 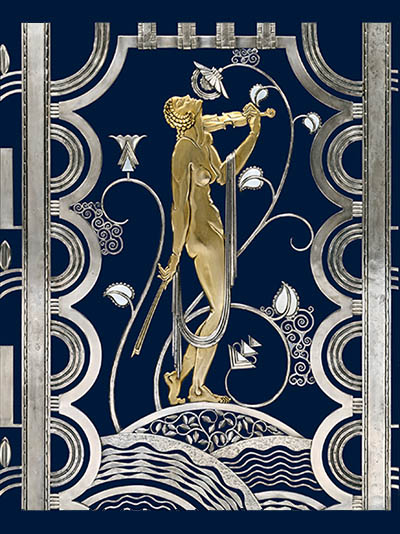 The monumental Muse with Violin Screen (1930) that appears on the cover of the catalogue for the exhibition catalogue. Photo Howard Agriesti

When Art Deco was officially launched in 1925 in Paris, it wasn’t an accident or even a coincidence that all the best designers had finally broken away from styles with roots in the nineteenth century. The French worked hard to create a new look. There were passionate pieces written by some of the most radical talents of the period in an effort to make change. They wanted to consciously begin a new era, distancing themselves form the atrocities of World War I and embracing new freedoms and attitudes with fresh designs that were as forward-looking as people were feeling.

Georges Fouquet, the president of the jewelry group of the show that formally launched the style, the 1925 Exposition des Art Décoratifs et Industriels Modernes, worked tirelessly behind the scenes prodding his colleagues to do something new and different. The campaign was a success. Art Deco jewelry was the most impactful style in history. It still inspires designers to this day.

Now, there is an opportunity to see dozens of jewels in person that have appeared in countless publications over the last 92 years. The Jazz Age: American Style in the 1920s opens today at the Cooper Hewitt, Smithsonian Design Museum in New York City where it will remain until August 20. Then the presentation will be staged at the Cleveland Museum of Art from September 30, 2017 through January 14, 2018. There are over 400 works in the multidisciplinary presentation from the decorative arts, fashion, interior design and, of course, jewelry.

Luckily, Americans went to Paris where they shopped with their strong dollars for the beautiful French jewels. There are jewels in the exhibit that were owned by silver screen stars including Mary Pickford, bona fide members of Café Society like Cole Porter’s wife Linda and socialites including Florence Blumenthal.

American jewelers made their own renditions of art deco. The designs are sparer and less exotic than their Parisian counterparts, who they were taking their cues from. American deco has a bit more muscle and some pieces have a whimsy not seen in European work.

The most original artistic contribution Americans made to the period was the music. They gave the 1920s its divine jazz soundtrack. Indeed, “jazz” is in the title of the exhibit. Listening to the tunes which have been worked into the Cooper Hewitt presentation, it’s easy to imagine a woman getting dressed and going on the town in the mode of those high-spirited sounds.  Jelly Roll Morton, Fats Waller, Louis Armstrong, Josephine Baker, the Jazz Era greats made numbers that go hand in hand with the deco style. Cue it up, while looking at highlights from the show below. It all makes sense. Or just think of a Great Gatsby party, that works too.

This diamond and platinum bandeau with a pearl accent in the front was made by Cartier in 1924. It belonged to Doris Duke and her mother Nanaline. They both wore the design featuring text book deco features: geometric motifs, an all white color palette of gems and metal plus a couple of fancy shape diamonds. Note the two pear shapes on the top. 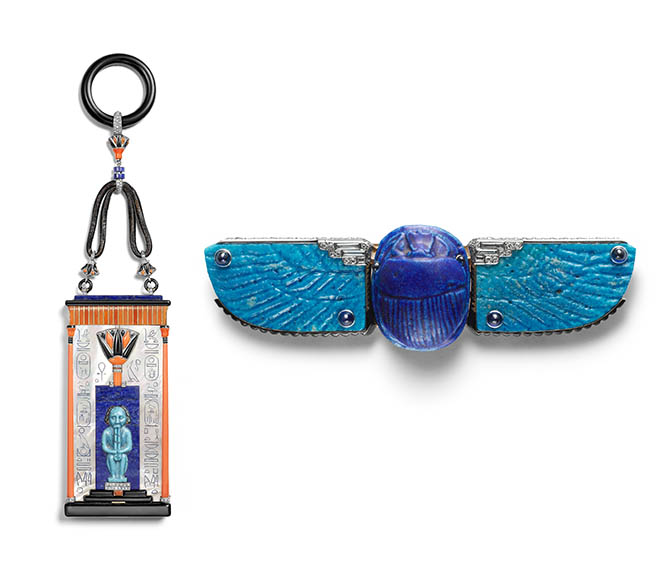 The discovery of Tutankhamun’s tomb by Howard Carter and Lord Carnarvon in 1922 inspired an Egyptomania movement within the French art deco style. Cartier incorporated ancient artifacts into designs. The Cartier coral, onyx and mother-of-pearl vanity, made in 1924, has a ancient Egyptian faience figurine as well as decorative hieroglyphics and a stylized lotus flower motif.

Cartier cleverly transformed the silhouette of a winged scarab into a belt buckle (above right) for Cole Porter’s wife Linda. It features ancient faience and a carved lapis at the center. Diamonds and cabochon sapphires accent the design. 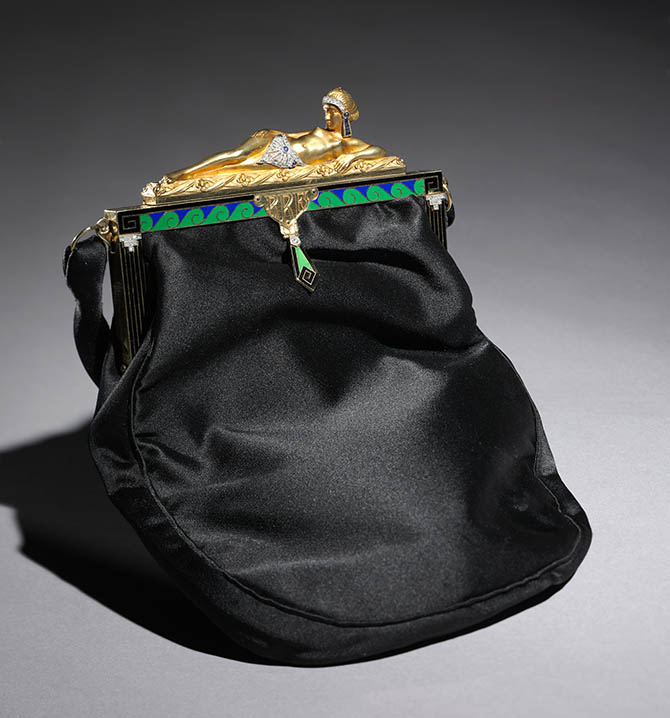 Courtesy of The Cleveland Museum of Art, Gift of Mr. and Mrs. Lee Lyon

The sexy gold figure on top of the bag frame, made by Van Cleef & Arpels in the 1920s, is accented with diamonds and sapphires. Her style is not an academic Egyptian interpretation. There is a dose of Turkish odalisque in her appearance.

Indian jewelry also captured the imagination of French art deco jewelers. Members of Indian royal families made frequent visits to Paris in the 1920s. They commissioned designs from jewelers like Cartier and Van Cleef & Arpels in the traditional Mughal styles. They also presented the jewelers with carved stones to set in western looks.

The carved ruby and diamond bib necklace made by Van Cleef & Arpels in 1929 echoes Indian silhouettes.

Carved gemstones become part of Cartier’s Tutti-Frutti style. The Tree of Life bracelet (above right) features carved sapphires and ruby leaves with emerald beads. The jewel was made in 1925 and purchased by Linda Porter. 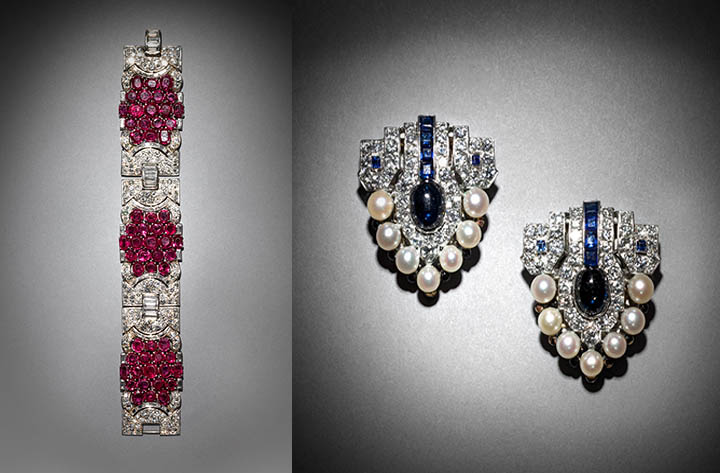 Wide bracelets and clip brooches were two of the most popular jewelry styles of the 1920s.

The bracelet on the left features clusters of rubies, diamonds and platinum. It has French marks and has been attributed to Mauboussin. The piece belonged to Zsa Zsa Gabor who wore it continuously throughout her life.

The double clips on the right were made by the great American jeweler Charlton in the 1920s. They feature diamonds and cabochon sapphires set in platinum. Pearls add a fresh element to the look. These jewels could be transformed into a jabot pin.

The Cartier Art Deco Jewelry in the Great Gatsby