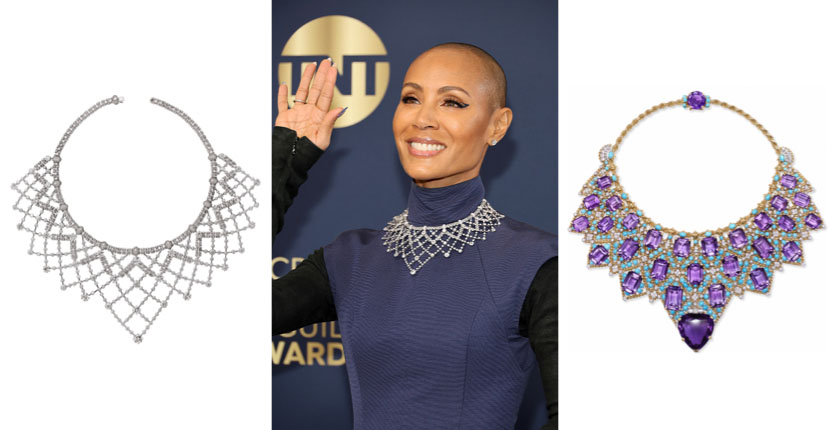 Cartier bib necklace worn by Jada Pinkett Smith at the SAG Awards and Cartier Bib necklace commissioned by the Duke of Windsor for the Duchess of Windsor in 1947. Photo Cartier; Getty; Nils Herrmann Cartier Collection © Cartier

Find out about the jewels Jada, Reese, Elle and Kodi wore to the SAG Awards

March 3, 2022—The razzle dazzle of the Awards Season red carpet provides a lot of jewelry joy. There is the styling and trend setting moments. There is also an opportunity to see important pieces, known as High Jewelry, being worn.

At the SAG Awards Elle Fanning, Jada Pinkett Smith, Reese Witherspoon and Kodi Smith McPhee all worked necklaces from Cartier into their looks that had a glimmer of old Hollywood glamour with a cool contemporary twist.

Each piece of jewelry featured historical design elements that were like a plotline to the French jeweler’s storied history.

Find out more below.

Elle Fanning’s Gucci suit was giving off Marlene Dietrich vibes. The German actress sported men’s suits during the 1930s when it was seriously scandalous. In fact, it was borderline illegal in France, but she did it anyway and ended up winning over the authorities. But I digress.

Elle’s suit was all sweetness and light with the Glossier pink-colored shirt, vest and bow tie. The actress pumped up the sweetness with a Cartier High Jewelry necklace.

The silhouette of the necklace harkens back to Cartier jewels made from around 1910 to 1930. Brown diamonds add dimension to the white diamonds on the necklace.

A candy-colored pinky peach 60.41-carat briolette cut pear shape Morganite forms the pendant. A variety of rose beryl, the gem was originally discovered in Madagascar in 1910 and named after gem collector and banker J.P. Morgan.

Jada Pinkett Smith, who gets cooler with every passing year, pulled her Gareth Pugh gown out of her own closet for the SAG Awards. She explained to Laverne Cox on E!’s Live from the Red Carpet “It’s vintage. It’s something I bought a while ago. I had it in the closet and I was like, ya know what, I think girl is ready for the SAG Awards.”

She lit up the piece with a Cartier High Jewelry bib necklace.

The openwork silhouette of the diamond jewel appears to be a tribute to a famous piece Cartier’s Creative Director Jeanne Toussaint created for the Duchess of Windsor in 1947.

The original bib (seen at top) has a gold rope twist frame set with amethysts and turquoise, a popular gem combination of the period.

Reese Witherspoon added a little edge to her classic style in a black Schiaparelli strapless gown with sides that curled up like the shape of a wave or outline of a violin. At the waist the knee-length number designed by Daniel Roseberry had a long dramatic light blue sash.

Like all of the new Schiap collections they reference the work of the surrealist designer’s heyday during the 1930s. The Cartier necklace took the link to the past one step further.

The geometric openwork shape of the necklace was just like something the French jeweler would have made for a glamorous socialite or perhaps lyricist Cole Porter’s wife Linda during the 1930s.

Kodi Smit-Mcphee’s white suit had all the modern-day elegance of the white tie and tails the leading men wore in Slim Aarons 1950s photo Kings of Hollywood.

Rather than wearing a tie, however, the young Australian actor who is nominated for a Best Supporting Actor Oscar for his role in The Power of the Dog chose to wear a diamond necklace from Cartier.

The Pluie de Cartier diamond necklace worn by Kodi is another one of several examples that prove men are moving on from the brooches they were wearing for the last several years on the red carpet.

Now they are wearing what was once classified as women’s necklaces. The lines between men’s and women’s jewelry are not just being blurred, they have been erased. Marlene Dietrich would obviously approve.

The Bracelet Dietrich Received For Her Defiance

Men In Hollywood Made the Brooch Happen

The Best Jewelry at the 2022 SAG Awards