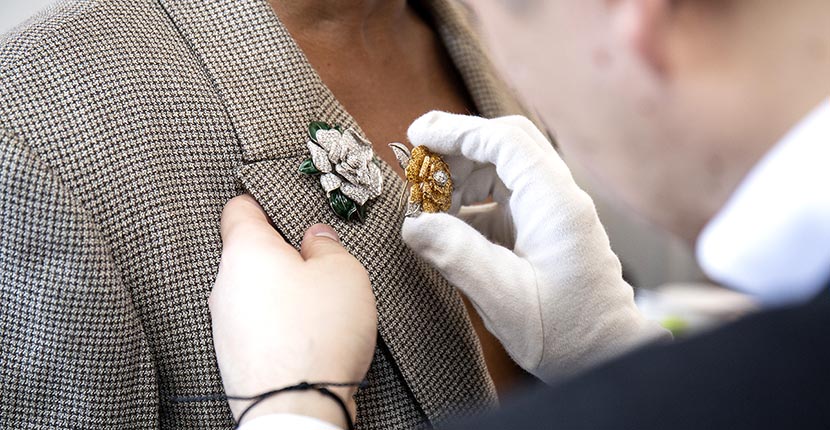 Billy Porter gets pinned in Oscar Heyman brooches as he prepares for the Golden Globe Awards on January 06, 2019. Photo Getty

Men in Hollywood Made the Brooch Happen

See the bold looks that finally revived the style

February 20, 2019—There has been a rallying cry from jewelry lovers for a long time to “Bring back the brooch!” While I feel like a member of the varsity squad of jewelry cheerleaders, I never joined in on this particular chant. Oh, don’t get me wrong. I adore brooches. I suppose, I felt a brooch revival was an impossible dream. Let me explain.

Throughout most of the 20th century, brooches have been an incredible medium for creativity. It’s arguably the most expressive figurative style of jewelry. Why you ask? Well, a brooch doesn’t have to fit around a neck, wrist, finger or ear. It’s like a small sculpture that is worn on fabric. If you want to get a glimpse at one of the masters of the medium check out the Schlumberger designs in the exhibit Drawn to Beauty: The Life and Atelier of Jean Schlumberger. 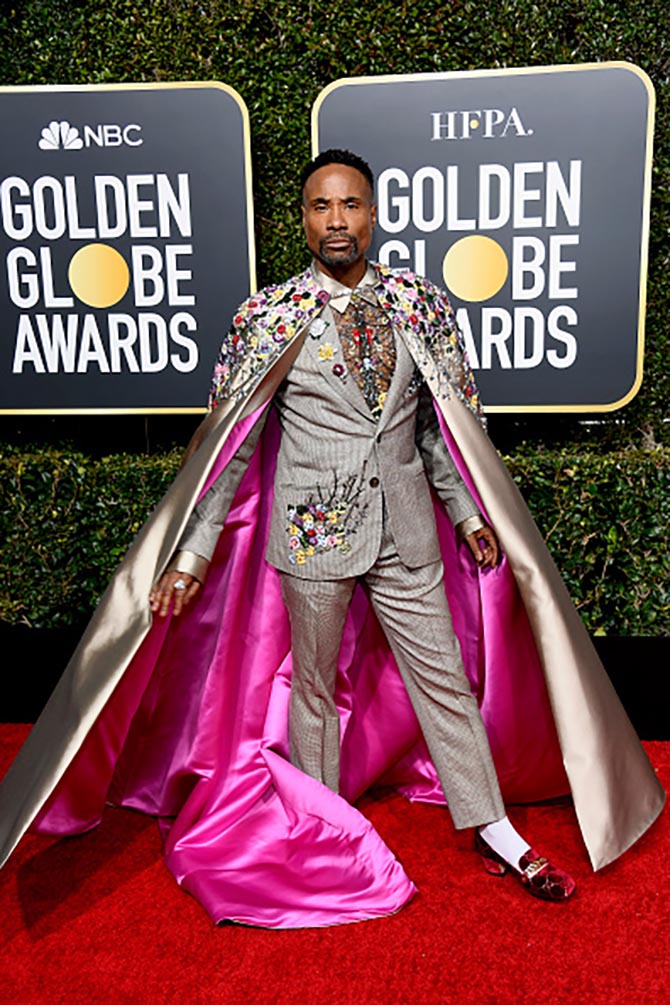 As women’s daytime attire became increasingly more casual and made with lighter fabrics, brooches began to fall out of favor. I would say brooches were pretty much gone by the minimalist 90s. And yes, brooches may look pretty razzle-dazzle from today’s perspective but most were designed to be worn during the day.

As ornate, maximalist clothes have comeback into vogue in women’s clothing, the brooch has not really returned with them. Brooches rarely appear in contemporary collections. Brooches can be found in High Jewelry collections when a House is referencing a design from the past or carrying out a representational theme.

When you see a women wearing a brooch today, they are generally a connoisseur level of collector. Often the pieces are styled in some incredible eye-catching way. On the red carpet, when a brooch shows up on a woman, its almost always vintage and usually worn in the hair. 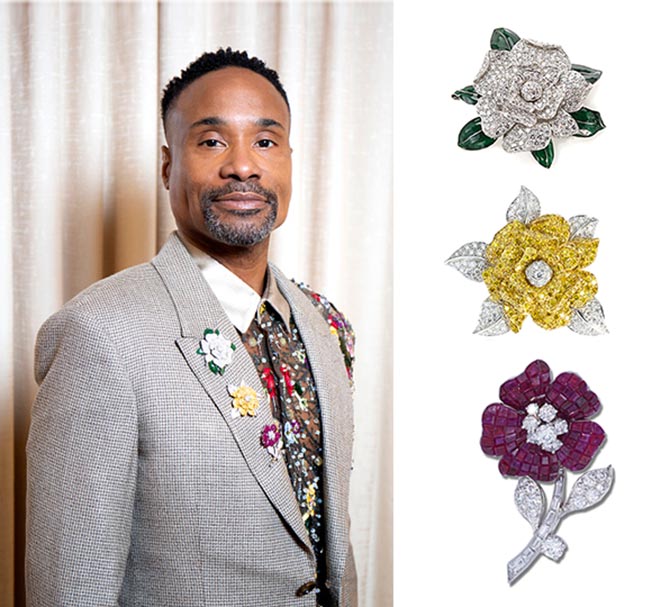 Well, after the 2019 Awards Season, I think it’s safe to say the brooch has finally made a high-profile comeback. Like all good revivals, there is a big of spin on the new wave. It has become an amazing men’s style.

The roots of the renaissance can be traced to the late great fashion designer Karl Lagerfeld. He was a pioneer in bringing brooches into men’s modern attire. The pieces he pinned on his wide ties were often diamond brooches by Belperron. In the last couple of years it has become a hot trend for men in the jewelry profession to wear a gemmy brooch on a suit jacket. I mark the beginning of the crossover into a wider audience when Schlumberger’s “Bird on A Rock” was worn on dancer David Hallberg in Tiffany’s 2017 national ad campaign.

On the red carpet, there have been any number of great brooch sightings on men in the last two years. A couple of major moments during the 2019 Awards Season, when amazing men wore not one, not two, but three big brooches on their lapels, really locked in the look. 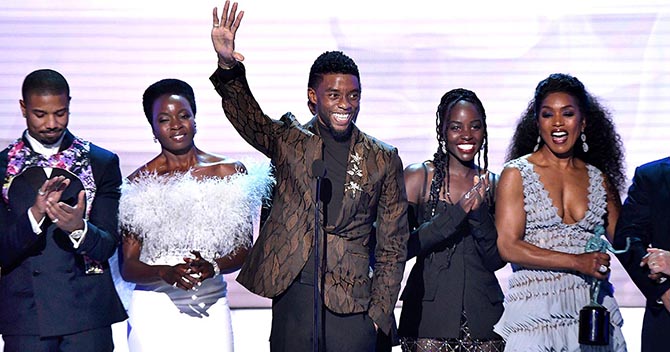 Chadwick Boseman wore Tiffany brooches when he formally accepted the Outstanding Performance by a Cast at the SAG Awards. He is flanked by Michael B. Jordan, Danai Gurira, Lupita Nyong’o and Angela Bassett. Photo Getty

At the Golden Globes in January, Billy Porter—who stars as Pray Tell on FX’s Pose—echoed the magnificent hand embroidery on his Randi Rahm cape and jacket with three incredible flower brooches by Oscar Heyman. The largest jewel on the top of his lapel was a diamond and enamel Gardenia brooch. At the center of his trio was a yellow and white diamond and platinum Gardenia brooch. The smallest jewel was a pretty substantial invisibly set ruby and diamond flower brooch. The bouquet cost around $280,000. 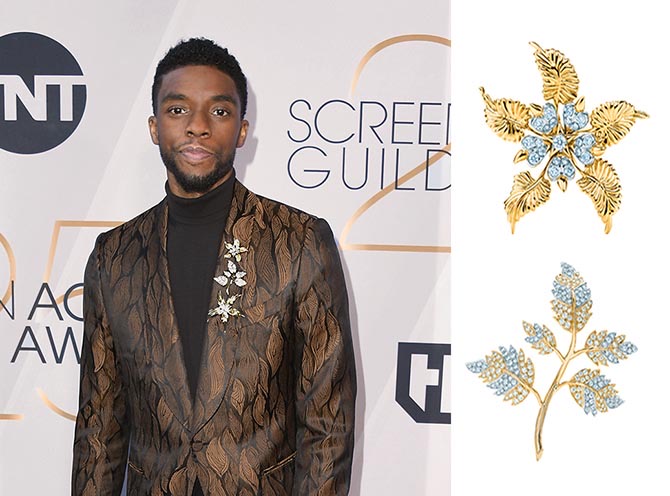 Chadwick Boseman and two of the Tiffany brooches designed Schlumberger he wore at the SAG Awards. Photo Getty

These men made brooches look so fabulous, they did what I thought was impossible. They brought the brooch back. In fact, they make the styles look so good, who knows, maybe brooches will make a return in a big way to the women’s arena. If they do or don’t I am overjoyed that the brooch is finally getting high-profile attention again. In a turn of phrase on the Wakanda salute, “Brooches forever!”

The Jewelry Surprises During the Grammys