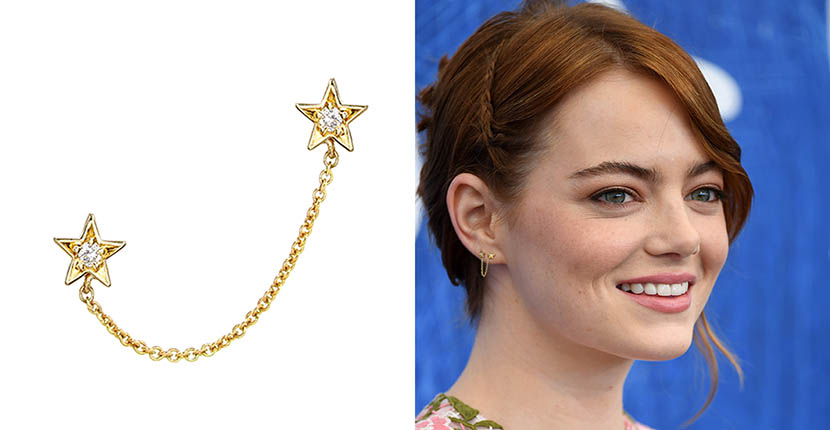 It might seem early, but the Oscar race heated up yesterday at the 2016 Venice Film Festival with the premiere of La La Land.  Critics universally praised the musical starring Ryan Gosling and Emma Stone who was radiant at the first press event for the movie in gold and diamond double star stud earrings by Jennifer Meyer.  The 27-year old actress paired the jewels with an adorable braided up-do and Giambattista Valli printed dress.

The earrings are a new addition to the beloved jewelry designer’s popular work.  “We did a whole mini collection of these double studs with chains,” said Jennifer.  “They are an update on the single studs for multiple piercings.”

The joyful jewels were also apropos for the La La Land press moment.  The musical’s title, setting and special brand of optimism is about Los Angeles.  It’s a spirit captured in Jennifer Meyer’s jewels.  The native Californian lives, designs and manufactures all her jewelry in the City of Angels.

I also suspect the stars might be symbolic of something in the film as Stone chose star motif jewelry for the red carpet premiere in Venice as well.  Watch the trailer below and see if you can find any clues about stars.